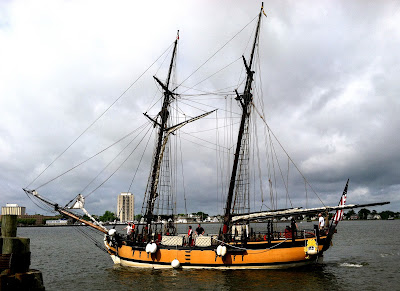 Went down to the Norfolk waterfront this morning with my daughter.  We were on foot, not on the boat, and I'm glad of that as I just saw some lightning outside the window.  There were a handful of tall ships around, including the Sultana which was arriving from a visit to Cape Charles on the other side of the Bay. 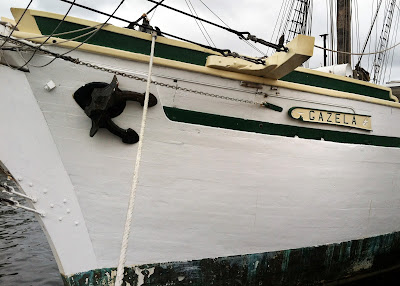 The old Grand Banks barkentine Gazela out of Philadelphia was leaving from the Otter Berth with a few deafening blasts of her horn.  She took part over the weekend in the Harborfest event. 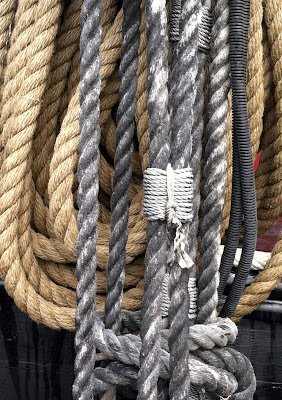 And the Schooner Virginia, who just returned from a winter down south, will be hanging around the Norfolk waterfront for much of the summer.  I can't wait to sail alongside of her.

ps - I just heard some more thunder.  Local radar shows a series of severe thunderstorms coming our way.  And we are under a tornado watch.  Yes, I'm glad we visited the ships on foot. 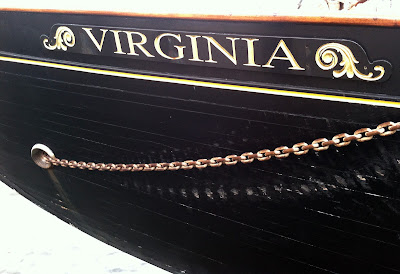 Hey, I know that first ship!

Yes, I'm sure you do. And I pointed out to my daughter the work your father did. She was impressed.

I know both of them. Wonderful to see photos of them both out and about. Gazela Primeiro (to use her full name) is more than 100 years old. When the Ship Preservation Guild took her over in the 80s her future was in doubt but they've managed to refit her and keep her sailing and even take on other projects. Like Sultana a job well done.

MaryLou,
I am going to try to make the downrigging this year. Hopefully we'll have better weather than when I was up there last time. I'll look forward to seeing you then.

Wonderful! We'll be looking forward to it.