day two - storms all around 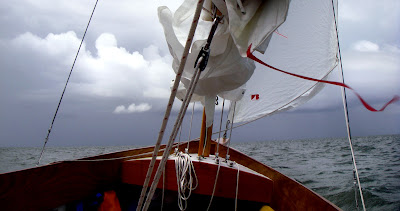 By early afternoon on the second day we were passing north of Great Island and talking about swinging in to Caffee Bay to try some fishing where I had caught some speckled trout last fall. About that time the wind picked up and a storm moved in from the southwest. We decided to pass on the fishing. We also decided to head up Swan Quarter Bay to a little canal I had spotted on the charts. The wind was swinging around to the southwest with the storms, but it was a cool little canal (even if it pointed wsw, almost into the wind) and we thought it might be fun to sail through it. Above we are sailing under mizzen and jib only, moving along along at four knots.

We could look around from the entrance to Swan Quarter Bay and see three storms, one ahead of us and two moving into our path. The wind dropped a little and we raised the main with a single reef. After thirty minutes we picked out the markers for the entrance channel to the north and brought Spartina around to a fine reach with the wind almost on the nose. You can see from the Spot track imported to Google Earth (thanks Paul!) that we started at the south edge of the entrance to the canal and just barely made it out the other end without tacking. I came close to coming about but a little gust of wind picked up at the end and carried us through. 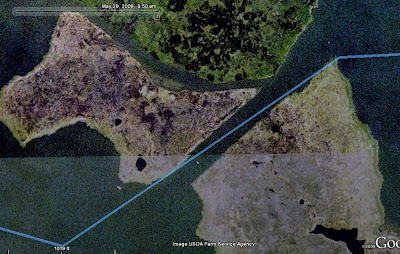 From there we fell off and sailed across Deep Bay, Rose Bay and Spencer Bay. The gps track shows speeds of 5 knots or better crossing the series of bays. 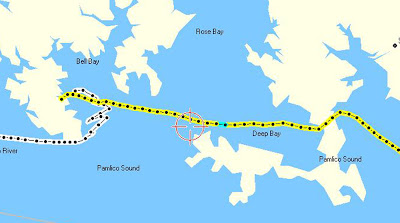 We anchored in a little creek in the marsh on the western shore of Spencer Bay, known as Mosquito Creek :( by the following morning, and the skies cleared for a beautiful afternoon. 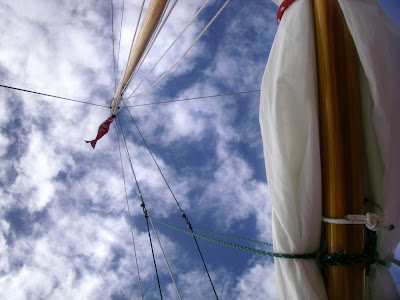 Guys, you are living the dream. I can't tell you how inspiring these pictures and commentary are as I labor away on my Pathfinder frames.

I'm curious, did the dry ice end up lasting all week or did you replenish?

Thanks for sharing your cruise. Really great work.

Seth,
we consumed the meat within three days and did not replenish. But with a combination of frozen meats, dry ice and frozen water bottles we suspect we could have easily had cold meat for five days.
Appreciate your comments, glad you are enjoying the blog. More to come.