From Eddie, another friend I have never met, a sailor of both
the Rozinante LUNA and the home-built Sootie Tern UNA,
comes a link to a video about Norfolk.  You can find it here. 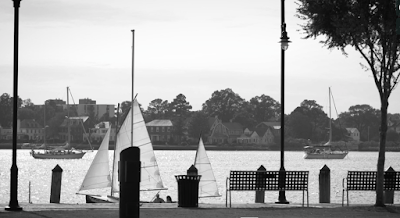 My wife and I have lived in the Norfolk area since the late
1980s.  Back then a major newspaper described the downtown
area as looking like a bombed out WW II city.  There was a
nice park and a place called Waterside, other than that it was
vacant lots, abandoned piers, "bookstores" and not much else. 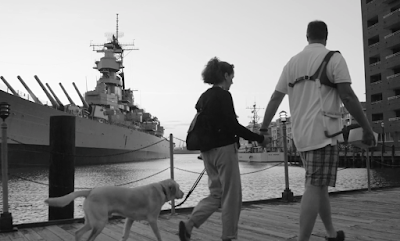 Since then the city has revitalized, which is the topic of the
video.  Eddie came across the clip and recognized the
sails of the yawl.  It's pretty cool to show up, if only briefly,
in connection with the rebirth of a town that has been
important in my life and work for the last few decades.
Thanks, Eddie, for passing on the link.

Very nice city, film and boat. Was that your daughter at the helm?

No, that was a friend from the community sailing club at Nauticus.

Very nice, especially for the cameo. I remember visiting Granby and Ghent back in the 80's when those were pretty much the only areas you'd want to go. Very cool to see it all come back, and do it so well.

Steve, you live in a really cool place. Wow! As a geographer, I have to say that was a really good little clip. And I love those trams. We once had trams in my city but WWII kinda took care of that. Still, that little video has made me think about how we should think about a short film for Plymouth......we too have much to offer at the Uk's 'Ocean city'
Nice sail past by the way, very nice!
Steve

"Cameo." Damn, why can't I come up with words like that.

that was only a slice of a very small part of the area, a very small slice. Wish it was all like that. At least it's a start. From the geography point of view I thought it was interesting that transportation was such an important part of the visuals - walkable sidewalks, bikes, light rail, uber and boats. Interesting what can make a place a good place to live. As I said, it's a start.

From little acorns.......transport is a passion of mine