Because of a little clerical error at work (mine) I realized just now that I don't have the planned 16 days off this fall.  Instead I've got 18.  Or at least I think I'll do.  I'll confirm this week with the office. 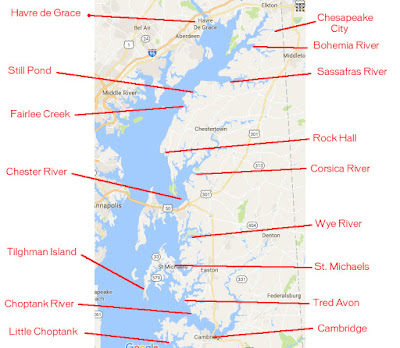 I had planned on two days in St. Michaels for the Mid-Atlantic Small Craft Festival, so I expected 14 days of sailing, two days at the festival.  Now I realized that I've got 16 days of sailing.  A nice little surprise.

I'll launch at Cambridge - nice, free ramp - head north to Havre de Grace at the top of the bay (pronounced "have-erdee-grayce according the the sailing guides) then do some exploring on the way back south.  There are some rivers and creeks I have passed by in the past - the Bohemia, Sassafras, Corsica Rivers, Fairlee Creek.  I have heard wonderful things about these places.  A couple of them have marinas, with laundry, restaurants, etc that I'll need/want on a long trip.

About six weeks until I head to Cambridge.  I'll start getting serious about packing around Labor Day.  Can't wait!
Posted by Steve at 10:06 AM