The morning's forecast is simple enough: light and variable winds.  I wonder how much motoring I will have to do to get down to the Pamlico River, out onto Pamlico Sound and east to the Bluff Point. 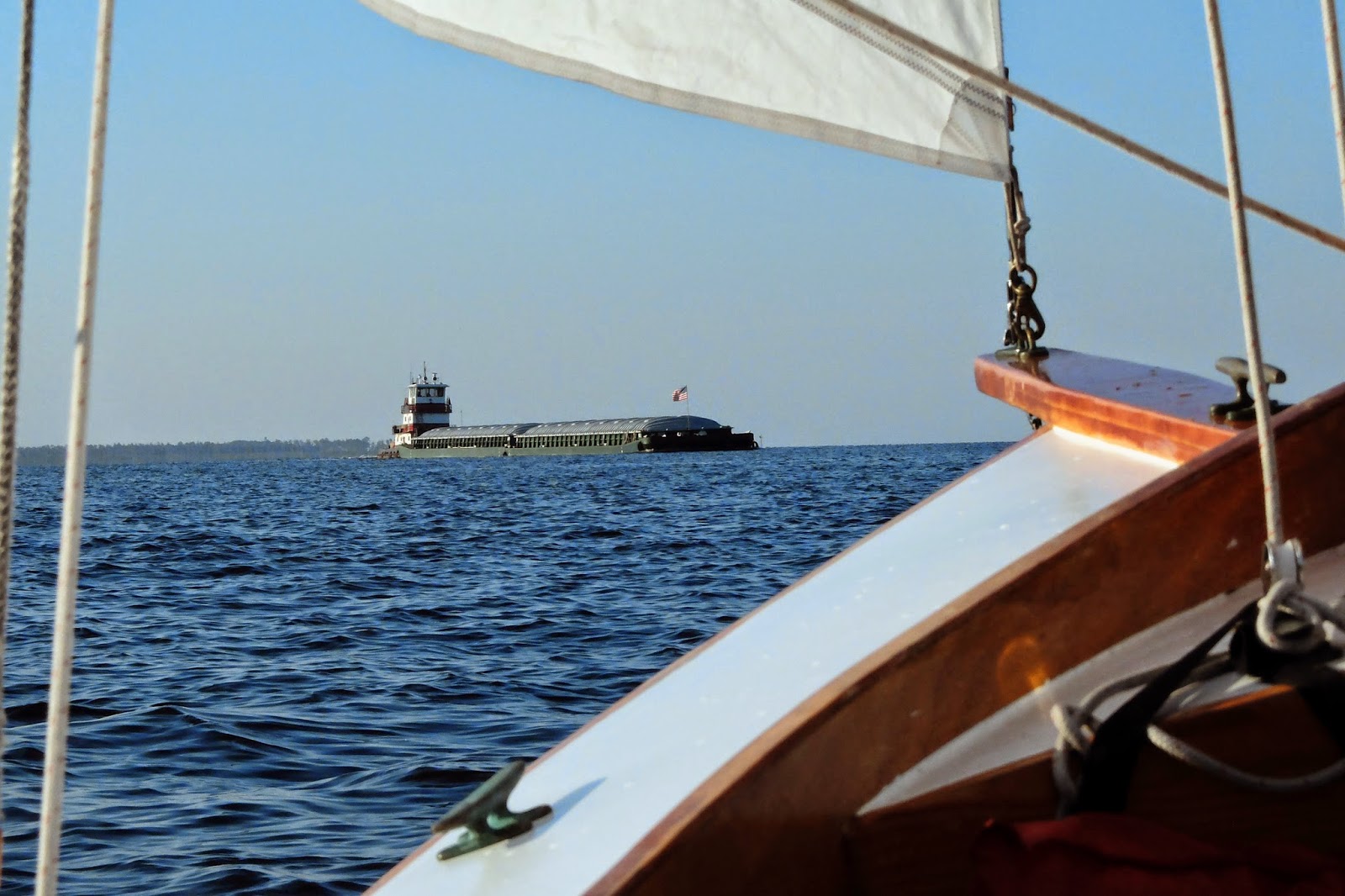 The morning sun paints the mainsail orange as we sail off anchor at dawn.  We motor sail in the forecast light and variable winds down Pantego Creek and through the wooden breakwater.  Just outside the breakwater the wind fills in from the west, making just over two knots at first, then soon almost four knots.  Not a cloud in the sky, cool and comfortable.  I decide I'm in no rush to go anywhere and will make the best of any wind I can find.

A tug, the Island Pilot, is pushing a barge up the Pungo River.  It looks like we will pass port to port until the tug makes a slow turn to the west and aims the barge in my direction.  I call the barge on channel 13, identify myself and ask about the tug's intended path.  He says he'll fall off a little and we can pass starboard to starboard, then wishes me a good day.

Breakfast is a granola bar and a cup of fruit served on the waterproof chart book, the one with a fine layer of salt covering the pages and rust on the rings. 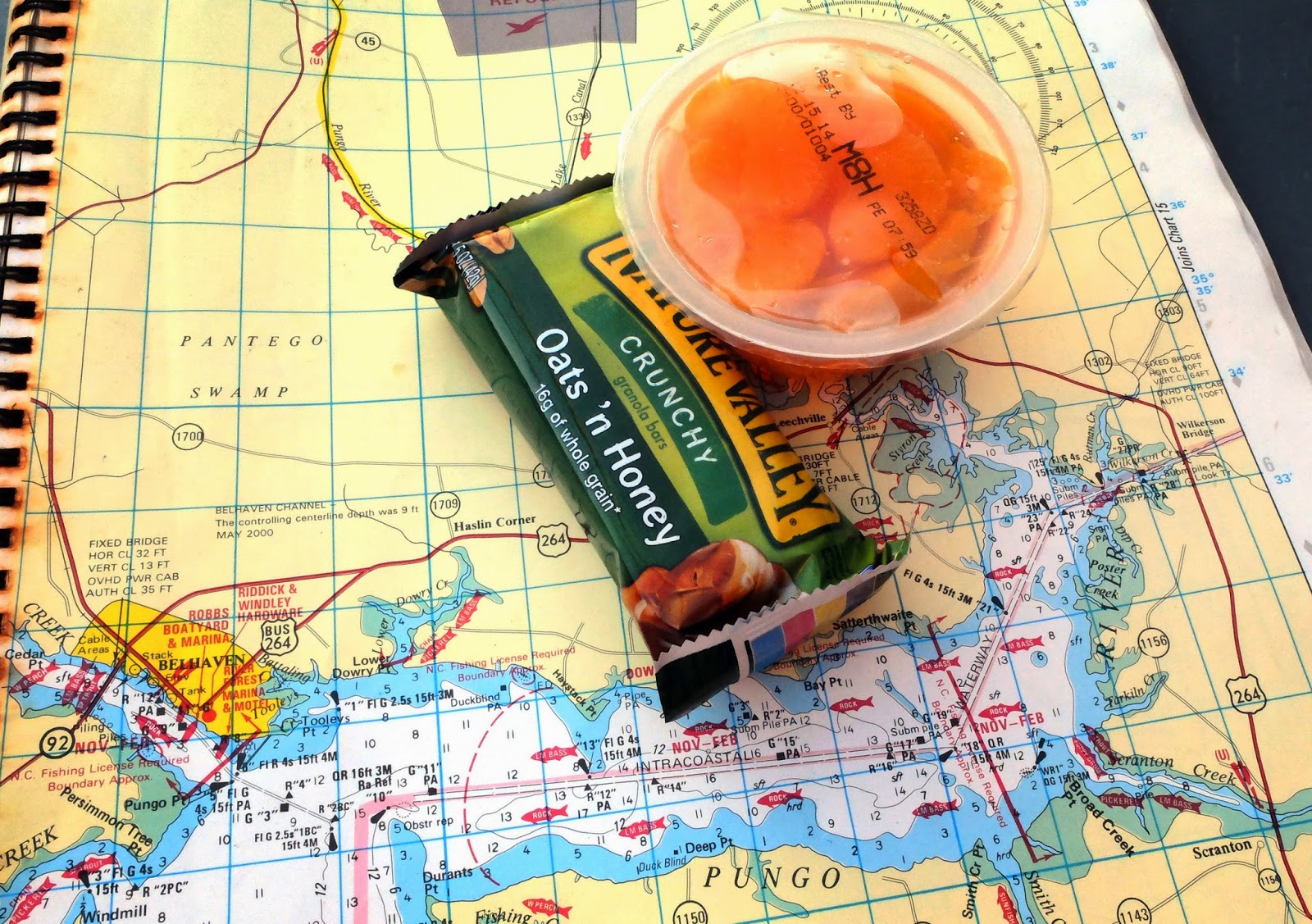 Passing Sandy Point our speed is down to 1.5 knots on the calm, peaceful morning.  A tern snatches at the water, laughing gulls cry in the distance.  I jot that down in my notebook, then wonder why laughing gulls cry.  More wind, variable wind.  Our speed goes to 2.3 knots, then 1.7, then 3.3. 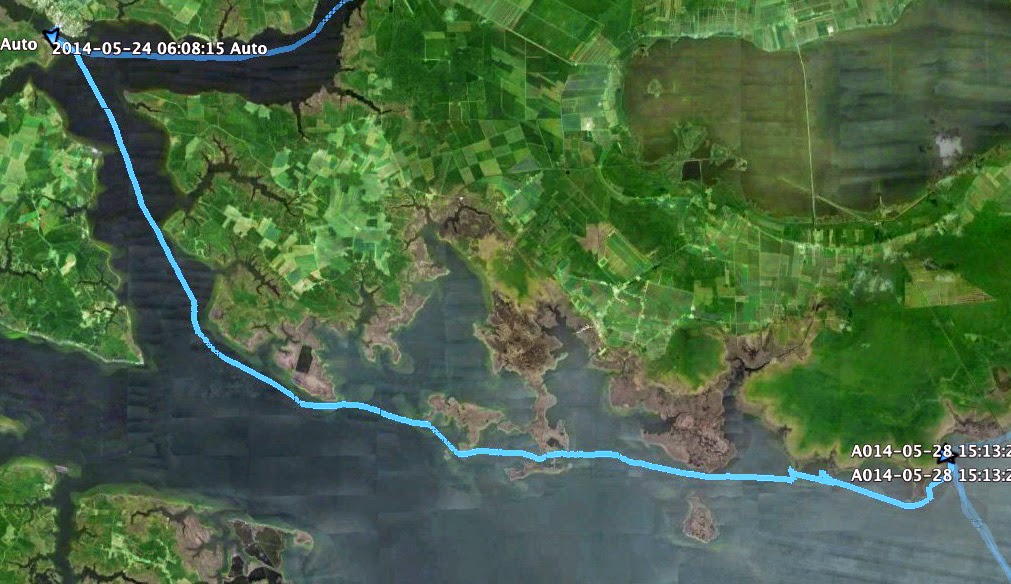 Heading SSE we sailing past the entrance to Fortescue Creek, then bear SE to Willow Point in winds stronger and more consistent then expected.  A lone dolphin plays near the point where we turn east towards marshy Judith Island.  The island, low and brown, can't be seen until we are a couple of hundred yards away.  We head to the south side of the island and cut through Judith Narrows, casting a lure along the way but probably moving too fast in a nice breeze to catch a fish. 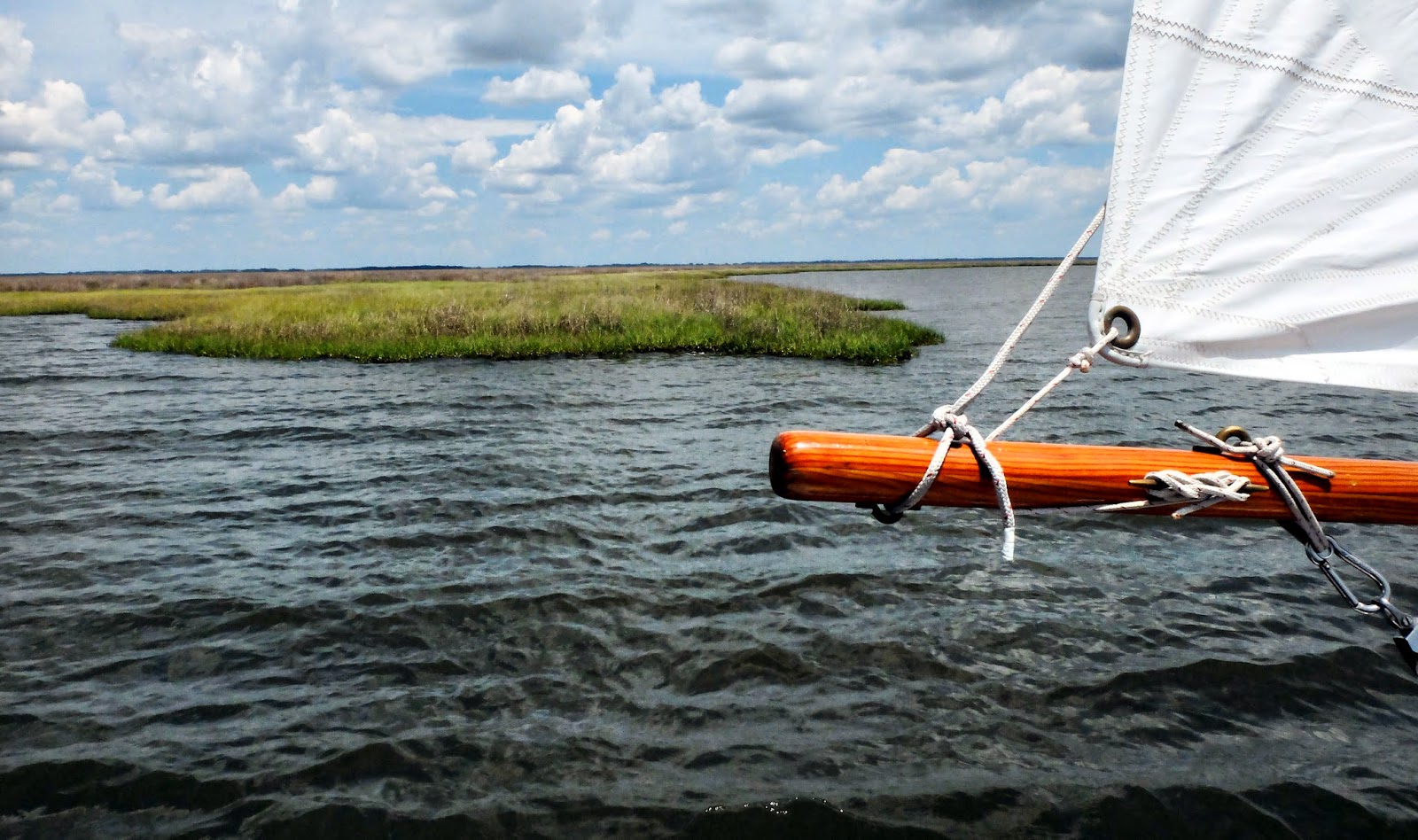 We sail into Deep Cove, the marshy patches of the island blending together on the horizon and I use the gps to find The Narrows between Swan Quarter Island and the east end of Judith Island.  As we sail east the marsh goes from a drab brown to a bright rich green.  The sky is blue, the water brown and the marshes green. 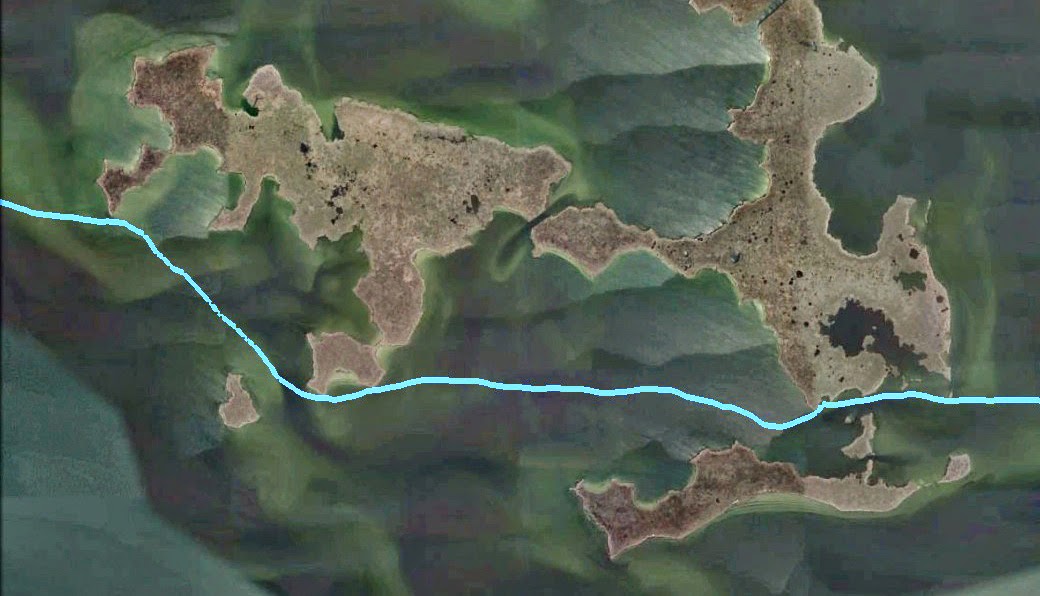 Sailing at three knots across Swan Quarter Bay I see an Ocracoke bound ferry coming out of Swan Quarter.  A marker is about 150 yards ahead of me and I realize I will soon be directly in the path of the fast moving ferry.  I start the outboard and motor across the channel, cutting the power just after passing the marker. 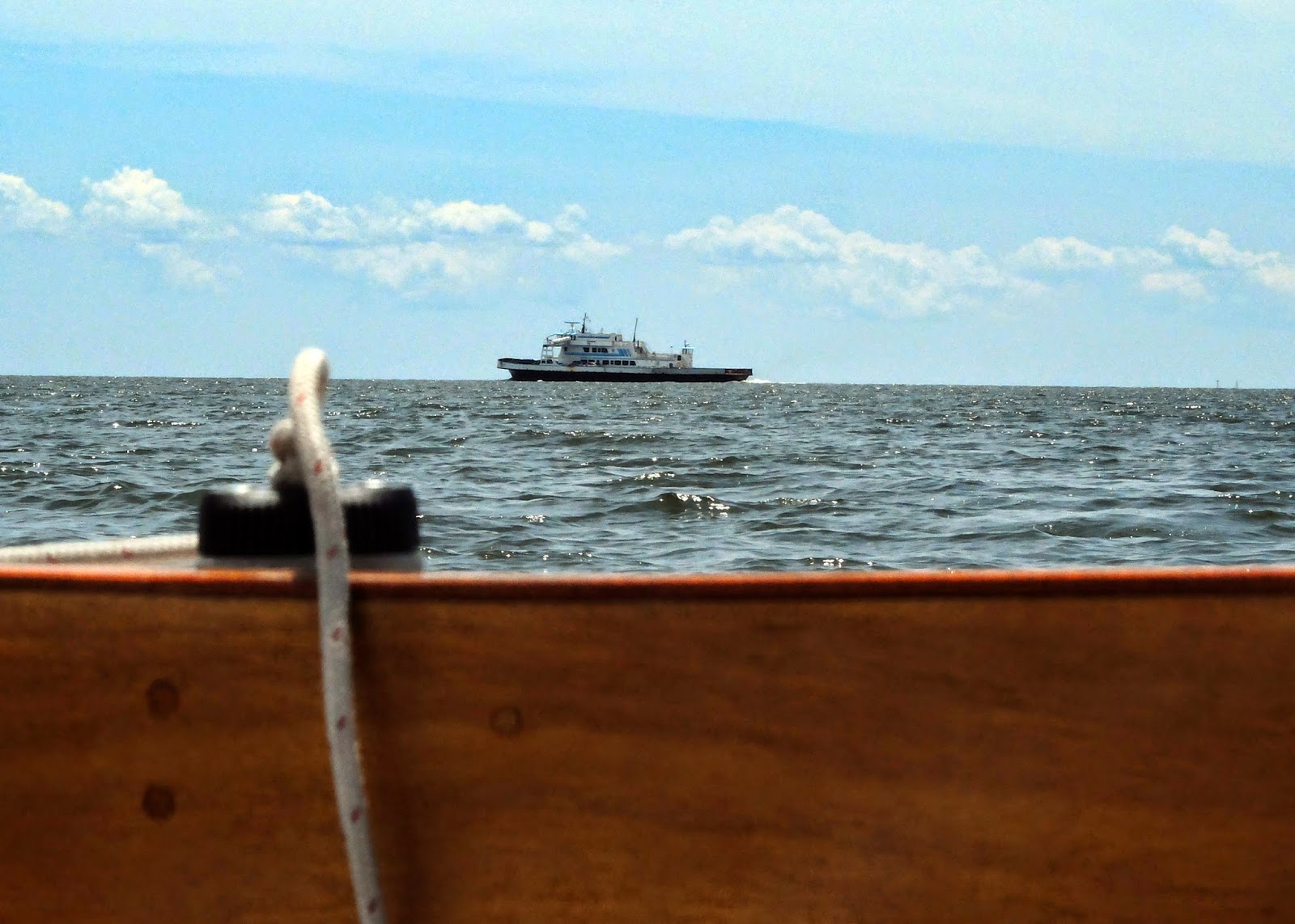 Calm water and a bright sun, I set up the solar panel on the foredeck to charge a couple of batteries.  We sail east behind Great Island, then across the mouth of Juniper Bay as the wind swings to the south.  I start to think about a place to anchor, a spot which would have protection from the south and southwest wind and also be a good jumping off place to head across the sound to Ocracoke. 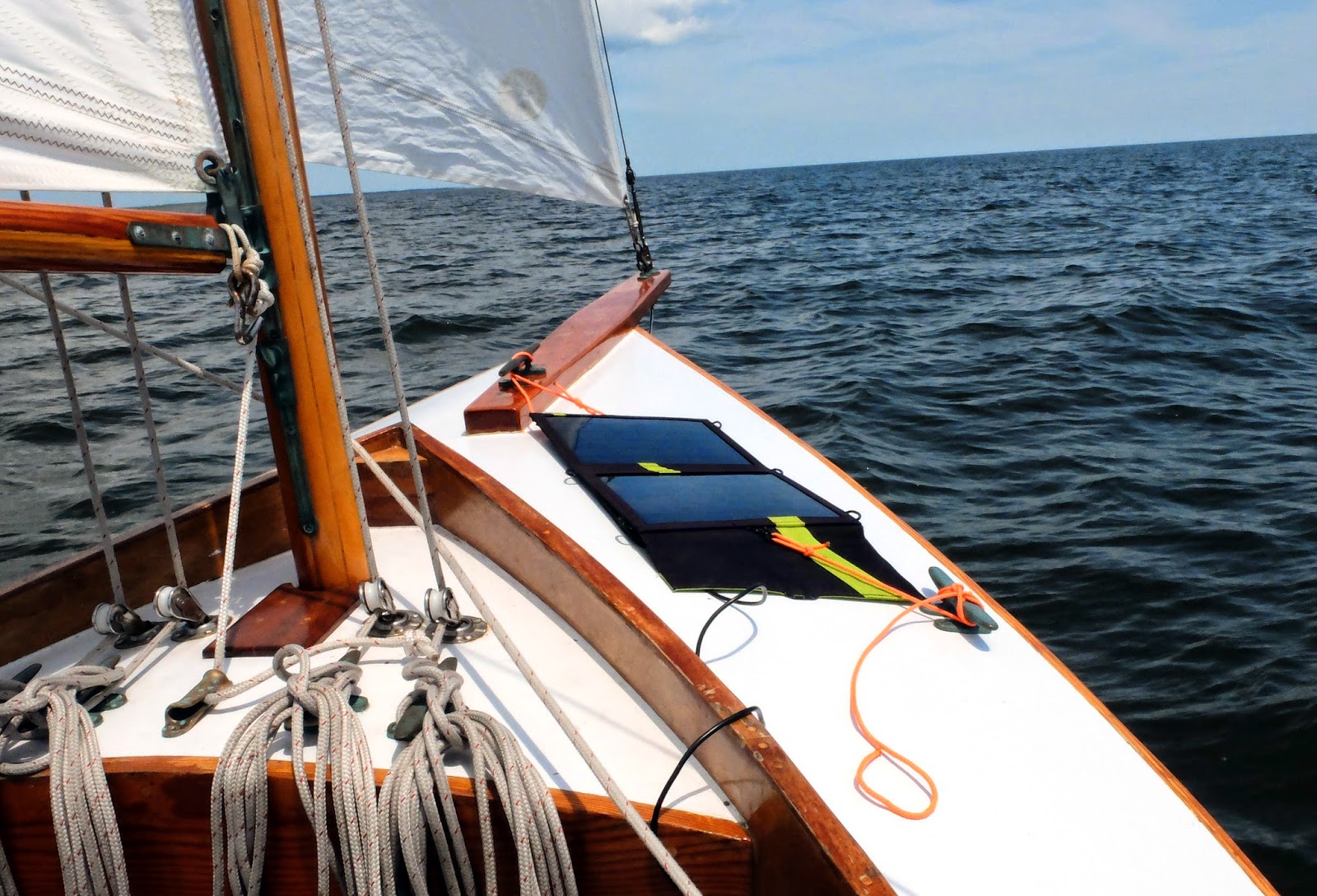 Past Juniper Bay there is a small bay, unnamed on the chart, just east of Juniper Bay Point.  I look closely at the charts and the shoreline, realizing there is no protection for me there in the increasing wind. 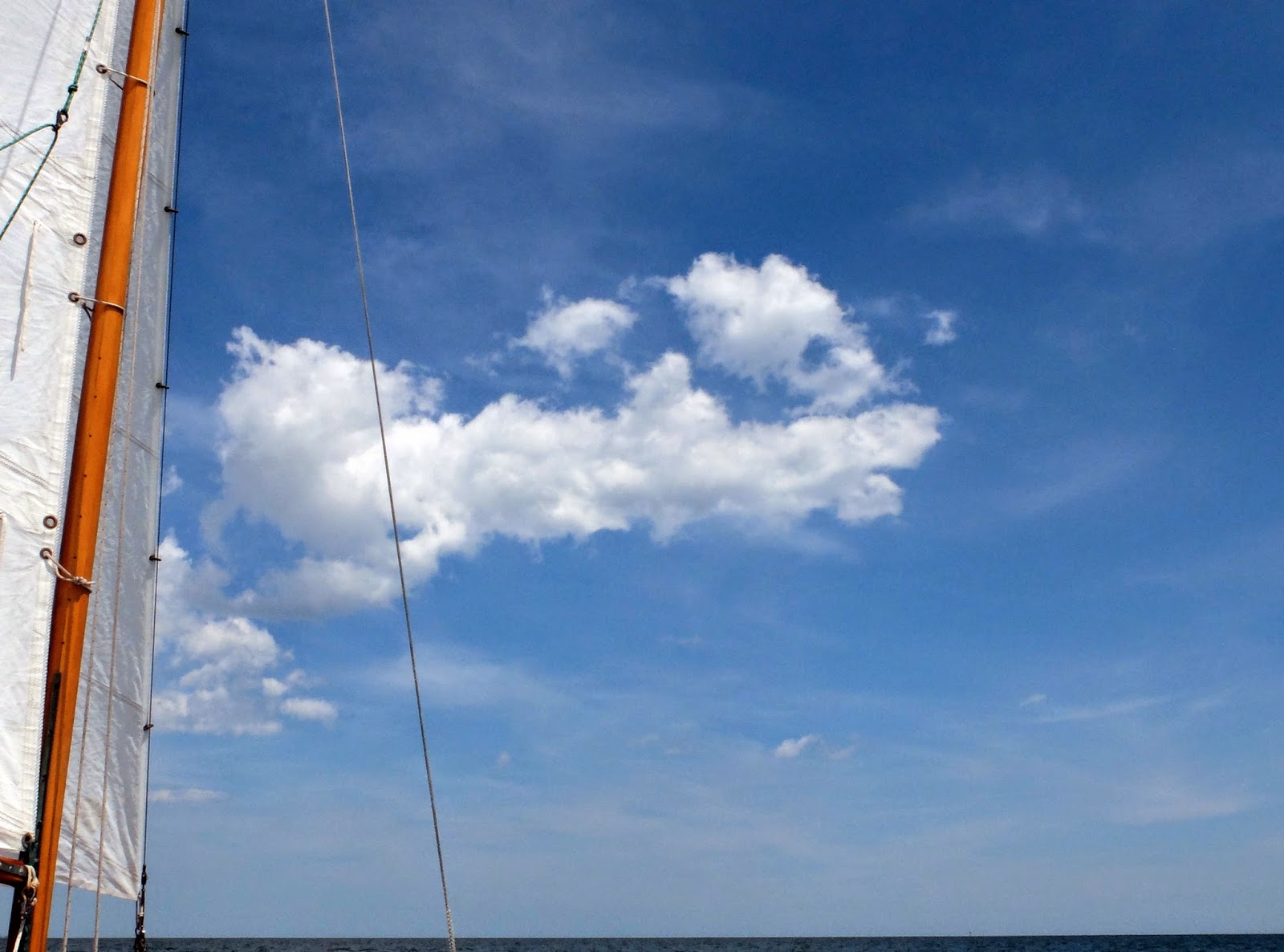 Just beyond that little bay, a hundred yards north on the shoreline, I see on the charts a tiny little cove heading west into the marsh.  That might be enough to tuck in out of the wind.  I think I see the cut, stand up on the cockpit seat to see a much larger expanse of water once through the narrow entrance.  The perfect spot!  I round up, drop the main, raise the cb and sail into the entrance under mizzen and jib.  Delighted with all that water tucked back in the marsh, I'm shocked to see that I had simply sailed through a cut back into the small bay I had just passed, the one with no protection.  The tiny little notch in the shoreline that I was looking at on the charts was farther to the north.  I'm hot and tired, and not happy with my navigation.

I tack out of the bay under mizzen and jib, drop the cb, raise the main and head east to Bluff Point. 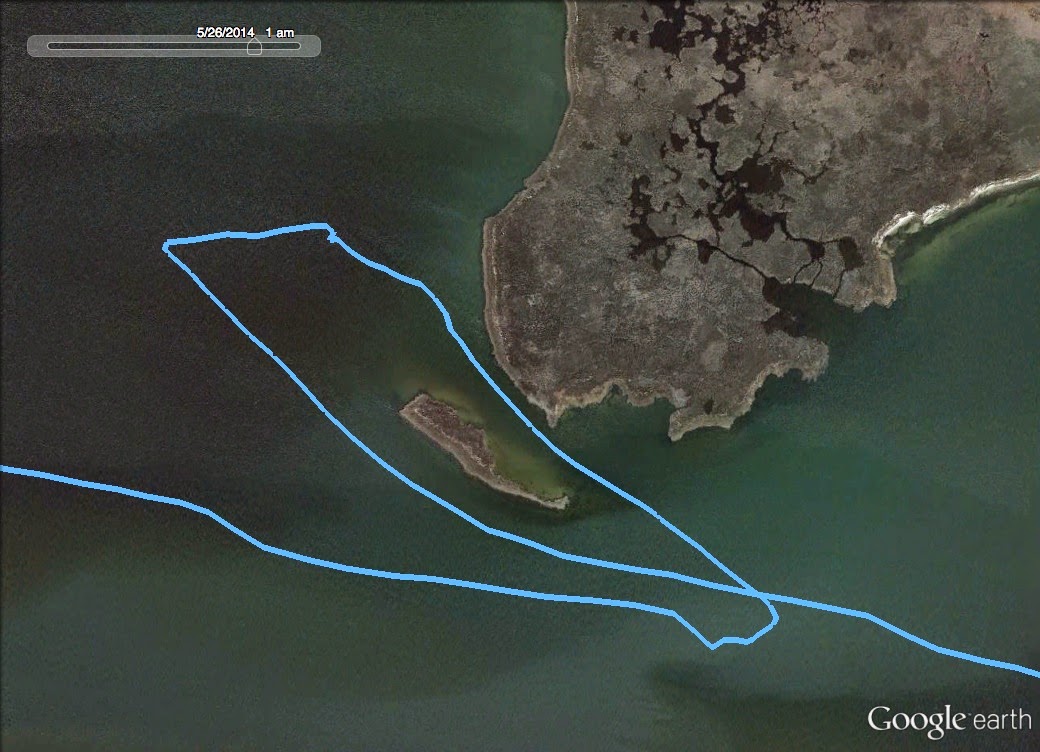 The wind is steady now and we are making almost five knots to the east.  Approaching Bluff Point the water is rough and confused as the swell builds out of the south on the Pamlico Sound.  At 3:50 we reach the point and turn north.  The water calms, then calms more as we turn into East Bluff Bay.  Sailing close along the shore of the bay we find a little cove to give us protection from the swell wrapping around the point, round up and drop the anchor.

I listen to the forecast for tomorrow.  Steady SW winds.  Ocracoke is to the SE.  I'm in a pretty good spot.

Not too bad of a day for light and variable winds. 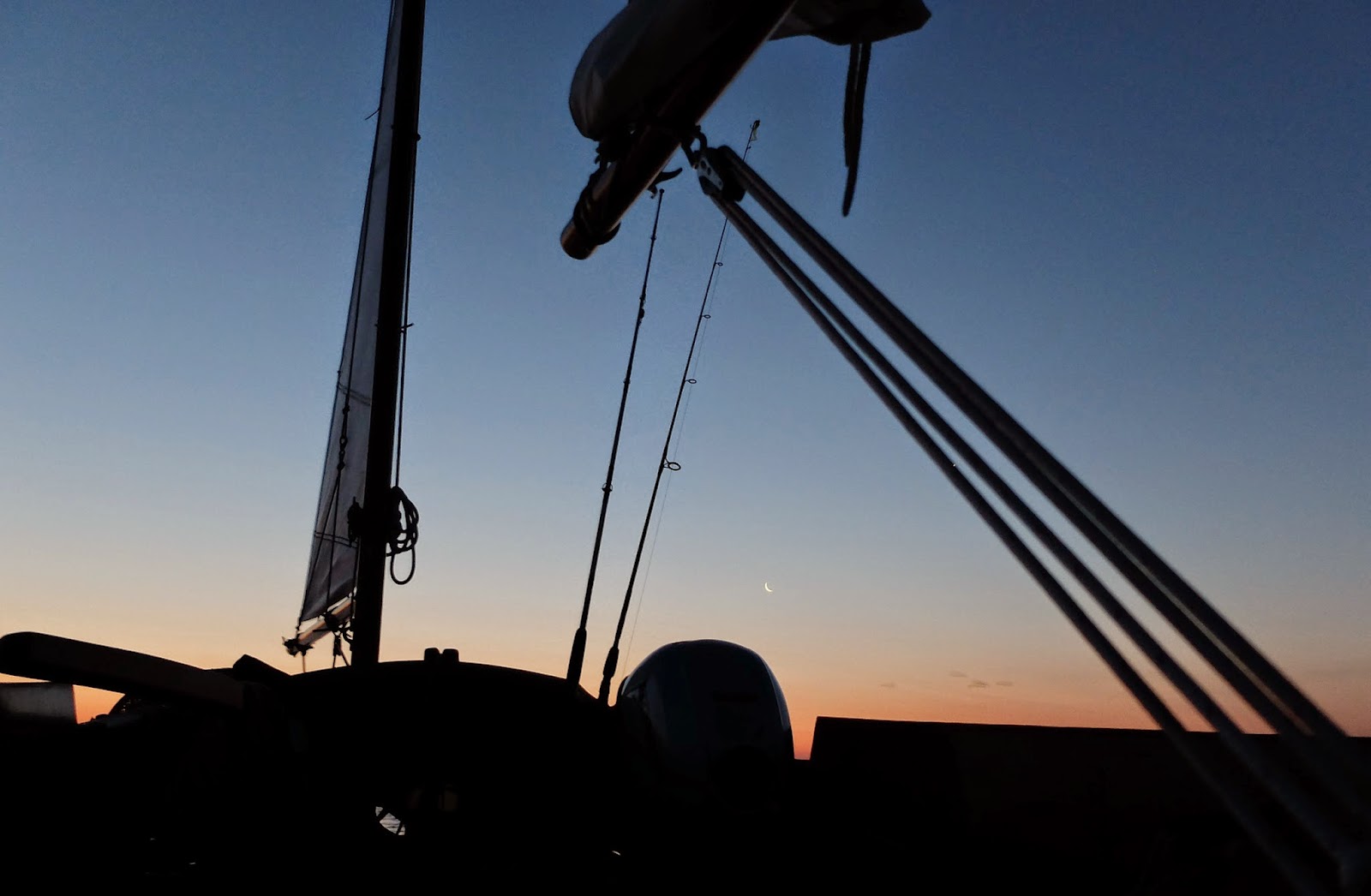