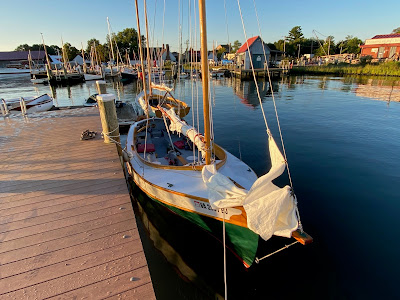 The day begins with a brief sail.  I had met Nick and Megan on their cruising catamaran a few days earlier on Dividing Creek.  Running into them the night before in St. Michaels Nick asked if he could join me for a short sail before I left, all those small craft at the festival had caught his attention.  So I motor over to pick up Nick with hardly a breath of air stirring.  But the wind fills in and we have an enjoyable 30 minutes of sailing and talking about small boats.  Soon we sail up alongside the catamaran and Nick hops off SPARTINA.  I turn out towards the Miles River at 8:30. 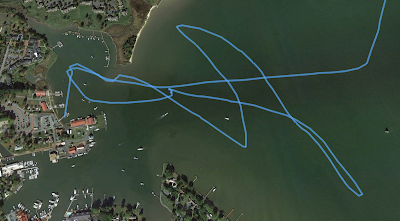 Wind over the port quarter, 4.3 towards Tilghman Point.  Deepwater Point at 9:00, 4.5, then our speed drops as we sail into the wind shadow of the point.  Out of the shadow at 9:20 making 3.9 as an eagle swoops low to the water and grabs a fish with huge yellow talons.  9:30 making 4.5 as I cut across the stern of the S/V CALYPSO.  Approaching Tilghman Point I slip on my foul weather bibs, we'll be sailing into the wind once around the point.  Make the point at 10:00. 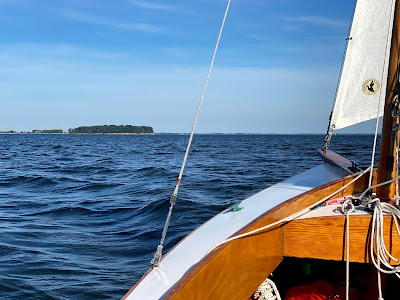 Doing 4.0 to 4.6 on Eastern Bay at 10:20, waves and wind on the port bow.  Tacking at 10:45, 11:30, 12:00 and 12:25 I make my way south.  Glancing to stern I see Nick and Megan on their catamaran heading for Annapolis.  My plan is to keep tacking south into the wind, sailing as far south as possible, maybe somewhere on the Choptank or Little Choptank.  At 1:00 I realize I have a straight shot across Chesapeake Bay to the West River.  So why not?  Might as well explore some new water.

Pass Bloody Point, the southern tip of Kent Island, at 1:20 and we are on Chesapeake Bay sailing at 4.4.  Nick and Megan are a couple of hundred yards to the south and speed by with their huge sails before turning north up the Bay. 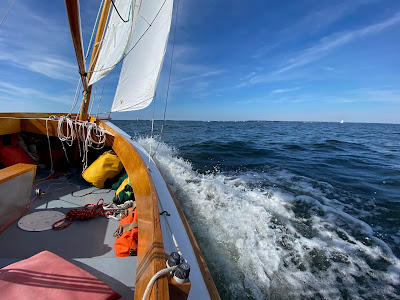 Five large freighters are lined up on the Bay.  I study them for a while until I realize that they are anchored, nothing to worry about there.  It's an easy crossing, steady wind on the port beam and calm water.  It's getting hot so I slip off the foul weather pants.  2:00 Curtis Point is in sight, GPS shows 4.0 kts but it doesn't feel like it. 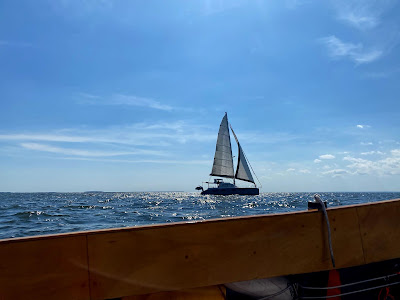 2:30 the rudder taps the float on a crab pot I had not seen and I realize we are in shallows approaching the point.  Enter the West River at 3:10.  Lots of pleasure boats out on the river, sailboats and big power boats.  I had lost track of the days and realize it is the weekend.  Checking my Navionics app I see there is plenty of water for my three foot draft outside of the marked channel so I slip to south side and escape the weekend traffic. 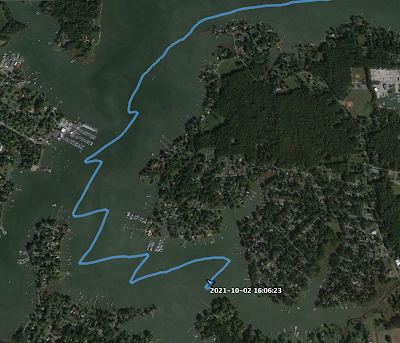 With a handful of tacks I pass by marinas on Councillors Point and Chalk Point and get a few friendly waves from people on big sailboats anchored near Back Bay Beach.  Two more tacks carry us to the mouth of the South River where I drop anchor at 4:00. 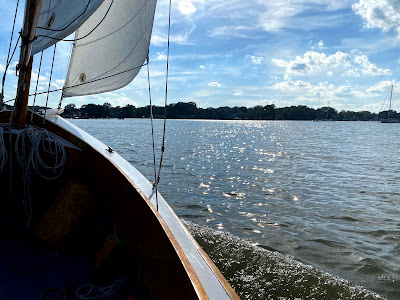 Pasta Primavera with smoked salmon for dinner.
29.79 NM
Posted by Steve at 6:57 PM

What a full day!