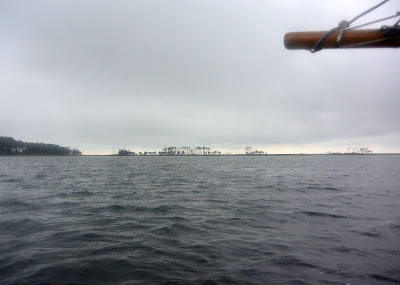 Morning.  Low grey clouds with a thin line of light on the horizon.  Weather radio says a "backdoor" cold front has arrived.  Strong east wind.  Sail off anchor 6:20 but round up a few minutes later to tie in a reef.  Making 6 kts south on the Honga River towards Tangier Sound.  I'm not sure where I'm heading.  It's cool, wearing the foul weather gear not because of rain or spray, but for warmth. 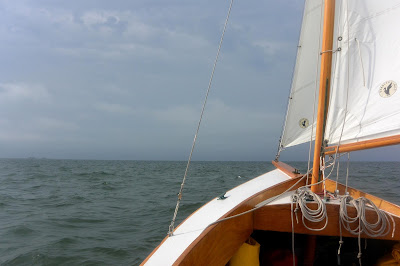 Crossing Hooper Strait where Bishops Head looks out of Tangier Sound I decide to head south to Smith Island, sailing in the lee of the string of islands that define the sound.  Low clouds starting to break up, 4.6-5.4 knots.  We slide down the western shore of Bloodsworth Island, an old bombing range where I have to slip farther out into the bay to get around a prohibited area.  Then back closer to shore.  Past Bloodsworth we come upon Adam Island 5.6 kts, the frames an old house, all that's left of the last structure on the island, looking like a shipwreck on shore. 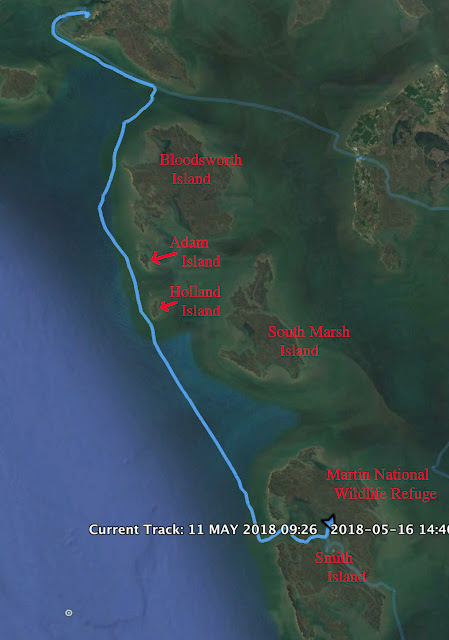 By 9:00 we are west of Holland Island.  The silhouette of an old rust-covered excavator stands out in the marsh, the house it was brought into save from the encroaching water now long gone.  These islands were once homes to communities, even plantations.  The the water is rising, the land sinking, and few vestiges of those towns and farms remain.  Kedges Strait at 9:35, bumpy with wind against tide.  Two dolphin off the starboard quarter, the first I've seen on the trip.  Rough water, making 4.5.  A patch of blue sky above, in the lee of Martin NWR the water is calmer and we make 5.7 kts.  Main and jib down at 10:30, the entrance channel to Ewell, the northernmost village on Smith Island is narrow, rock-lined and heads directly into the wind.  Under power past the jetties and then the winding channel through the flats.  The sun is breaking through the clouds and I enjoy the warmth. 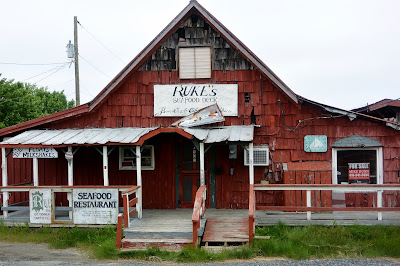 Tied up at Ruke's dock I walk towards the old grocery/restaurant until a woman says "Don't bother.  It's closed."  It is closed for good, she tells me, been so for a couple of years.  I tell her how much I enjoyed the crab cakes there, made by three kind ladies, the best crab cakes on the bay I tell her.  Yes, she says, "made with love."  I ask where else I might get lunch.  Nowhere, she tells me, it's Sunday.  Only two other spots in the village, one doesn't open until Memorial Day, the other closed for the day.  I thank her for the information. 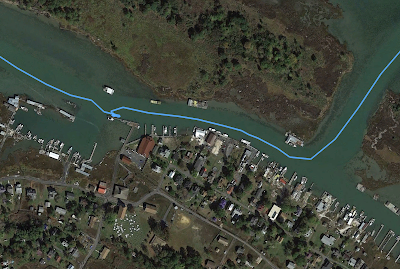 Back to SPARTINA where I hang out some gear to dry.  My clothes from last night, certainly wet, and other gear just a little damp from the storm.  Then a walking tour of the village where I visit with an retired waterman named Jessie.  We talk about the weather and the crabbing, he is a kind man and wishes me well. 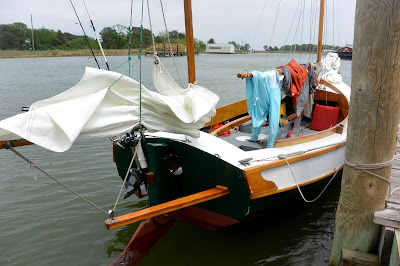 Walking back to the docks I see the Smith Island Cultural Center is open, the idea of air conditioning appeals to me.  I'm a little surprised it is open, I am almost certain that I am the only visitor on the island today.  Inside I find Laura who takes my $3 admission fee plus another dollar for a bottle of water.  She is friendly and very proud of the island where she has lived for 30 years since marrying a waterman.  As the only visitor I get a personal tour from Laura as she points out her family connections in the photographs and maps on display.  We also talk about crab cakes and Ruke's, and the crab cakes they will be making next door in a few weeks once the Bayside Inn is open.  She used to work at the Inn and says those are in her opinion the best crab cakes, even better than Rukes.  Then she tells me her bike is right outside, I'm welcome to borrow it for a tour of the village.  How nice. 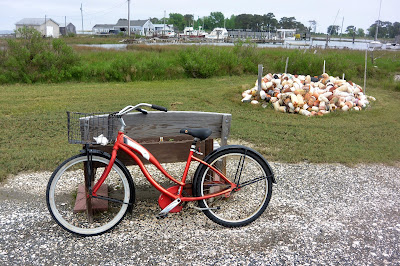 It's a small village, the road is a figure eight with the Methodist Church in the middle.  I can't get too far lost.  So it's off for a ride past the marshes and mounds of oyster shells, piles of crab pot floats, well-used workboats, crab shanties and homes. 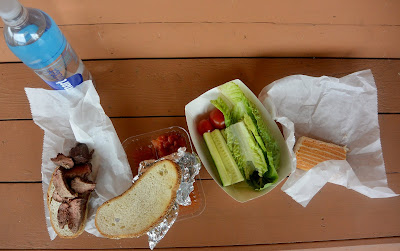 Riding back to the museum there is a car parked out front - not too many cars on the island - and out from the door of the museum comes the woman who had told me about Ruke's being closed.  She smiles and almost sings "I've brought something for you!"  I don't realize she is talking to me until she says it a second time.  She reaches into her car to bring out a bottle of water, a nice gift.  Then she reaches back in to bring food in cardboard trays, foil wraps and plastic bags: two thick slices of toast, chunks of roast beef, a salad, slices of cantaloupe, a lemon, a lime and a slice of eight-layered cake.  I am touched and taken aback by her kindness, and cannot thank her enough.  In fact I have little time to thank her as she hops in the car to drive away.  I ask her name.  "Dory" she says, waving goodbye with a smile.

I sit on the porch at the museum and enjoy my lunch, thinking about how or why I deserved this unexpected delight.  Then I think about 14 hours earlier, dragging SPARTINA across the cove in the thunderstorm.  The contrast between the moments reminds me of Peter Matthiessen's line in SHADOW COUNTRY about how "life was great and life was terrible and life could not be one without the other."  The storm was not "terrible," but it was a test.  The gift of the Smith Island lunch is great.

Finished with lunch I duck inside the museum, thank Laura for her tour and loan of the bike, and ask her to tell Dory that the meal was wonderful and finer than any crab cake I might have found on Smith Island. 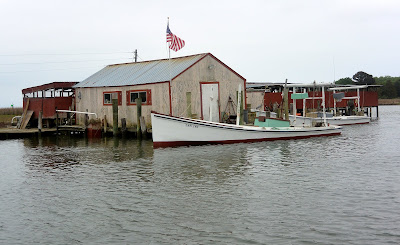 We cast off from the dock at 2:30 against a running tide, following the channel past the crab shanties and docks to the Big Thorofare. 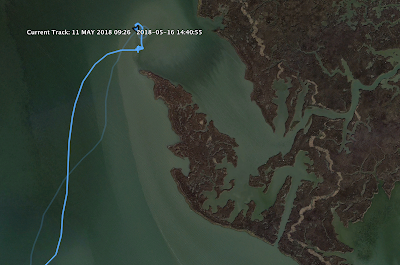 Just a short motor across the water to a gut side of Martins National Wildlife Refuge, anchor down in about six feet of water at 3:00.  Reading.  A nap.  Light snacks for dinner.  Peaceful.

The closing of Rukes hit me pretty hard. They had the best crab cakes and friendly service. Unfortunately the rest of the island might not too far behind.