day one - wind out of nowhere 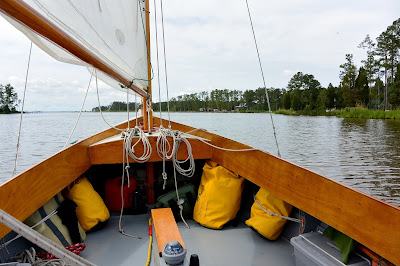 Cast off from Potter's Marine just after 10:00.  This overcast with light breeze and an occasional gust.  Making 2.8 kts down the creek until a line of trees blocked the wind.  A line of geese paddles along shore. 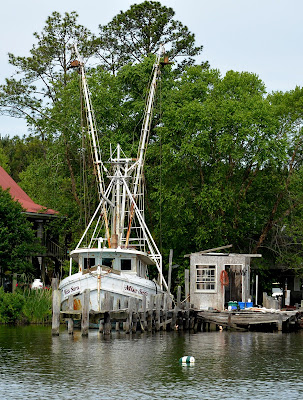 We tack past a line of bright purple crab pot markers.  At 10:30 more wind and I hope for a direct course that will carry us down Pamlico River to the Sound.  Fisherman cast for trout at the edge of the marsh, 2.2 kts and a late breakfast of a mixed berry bar and a buffalo/cranberry stick, steak and eggs for a small boat.  Light SW wind approaching Chambers Pt.  We lose the wind completely, motor around the point then drift for a bit.  Under power 11:20 until a south wind arrives a few minutes later. 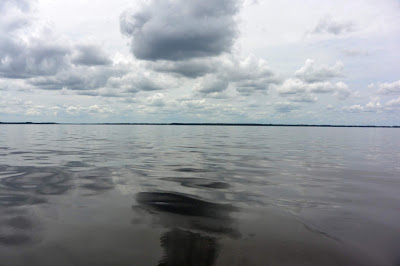 Wades Point, at the mouth of the Pungo River, to the NE.  Two cormorants skim over the smooth river.  At 12:30 a dark line of rippling water approaches.  East wind!  Sailing!  3.5 kts then 4.3.  Wind drops, swings to NE.  Back down to 1 kt.  Then wind comes back, 3.0.  There's a tall stand of pine trees off the starboard bow, beyond that is Pamlico Point and the Sound. 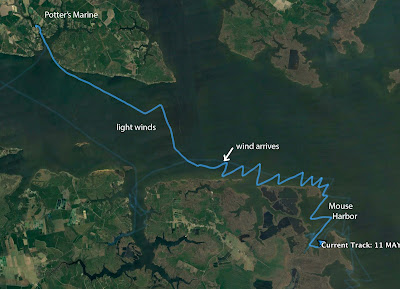 Leather on the gaff jaws creek as we roll in the chop.  We have sailed into a hole in the wind.  Mired in calm water, ruffled water ahead. 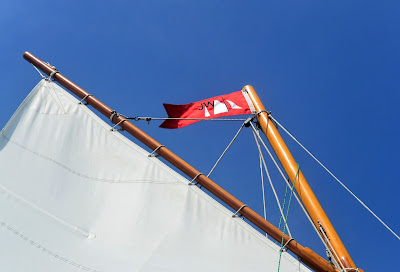 The wind arrives fast and hard.  At first 4.5 kts and then the wind builds out of the SE, waves rolling in from the Sound, SPARTINA heals and lots of spray coming over the bow.  Tacking closer to shore, 5.0 knots with calmer water in the lee of the marshes.  A late lunch of tuna fish.  The marsh grass is bright green, the sky deep blue.  A series of tacks to the south shore of the river then back out again.  Great sailing. 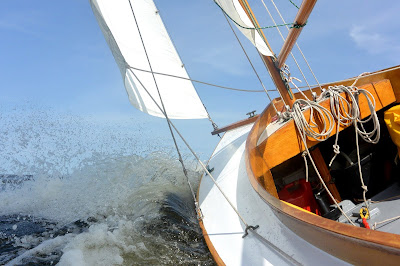 Green Marker #1 at 3:45, Pamlico Point ten minutes later, 4.4 kts.  Past the point we fall off and slide across Mouse Harbor at 5.5.  I slap water on my chart book pages so they stick together and don't blow back and forth in the wind. 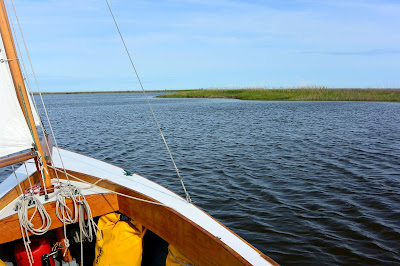 I take a look at a couple small coves for possible anchorages, but the water is calm behind a wide expanse of marsh that separates the bay from Pamlico Sound - no need to tuck into a tight anchorage.  We fall back from the marshes.  Anchor down just after 5:00.

Beef stroganoff and mango fruit cup for dinner.  Chance of rain after midnight.  I set up the boom tent and get out the sleeping gear.

And thanks for the rigging shots, we are rigging our first little gaff sail, for a canoe.I can see gaff halyard, throat halyard, topping lift, downhaul and lazy jack lines, what is the other big line run through the block on the deck and heading up the mast?

That's the downhaul for the gooseneck. Stuart, my sailmaker, suggested I add that to improve the set of the main. It makes a big difference. I raise the main, peak it up and then when it is all set I push down on the forward end of the boom/gooseneck, securing it down with that downhaul running through a tube cleat. This really improved the set of the sail.

Definitely a good addition. My boat will get a boomvang added on top of the downhaul and gooseneck soon replacing the current sprit boom setup. With regatta coming up i also want to improve the sail performance...

Rik, good to hear from you! Please send photos from the regatta, always love those....