In early morning darkness a deadrise cranks up the diesels and leaves the cove, Spartina rocking in her wake.

A second deadrise heads out just before dawn, no wake this time. 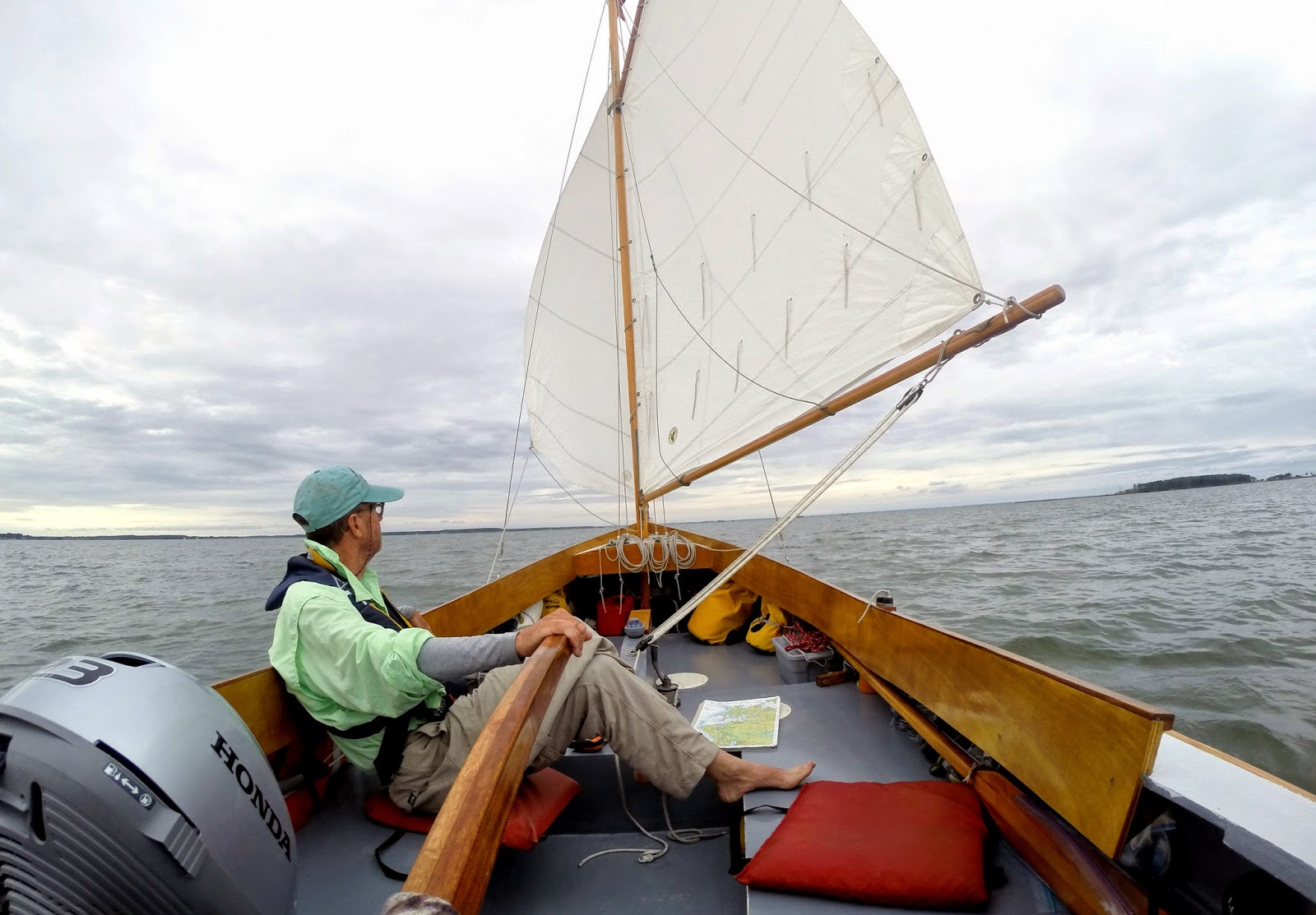 Mainsail up just before the sun creeps over the tree tops on the far side of Hudson Creek.  A northeast wind makes for a peaceful sail out of the cove and down the creek.  The wind freshens as we enter the Little Choptank, an eagle takes flight, swoops low over the water and returns to its perch on a tree.  Wing and wing down the Little Choptank, cool and grey.

Approaching James Island the wind swings to the east and we pass Oyster Cove at four and a half knots with wind on the beam.  Patches of blue sky amidst the grey, crabbers work their pots and seagulls come into to snatch up the old bait tossed overboard.  Wind falls off and the tide carries us south. 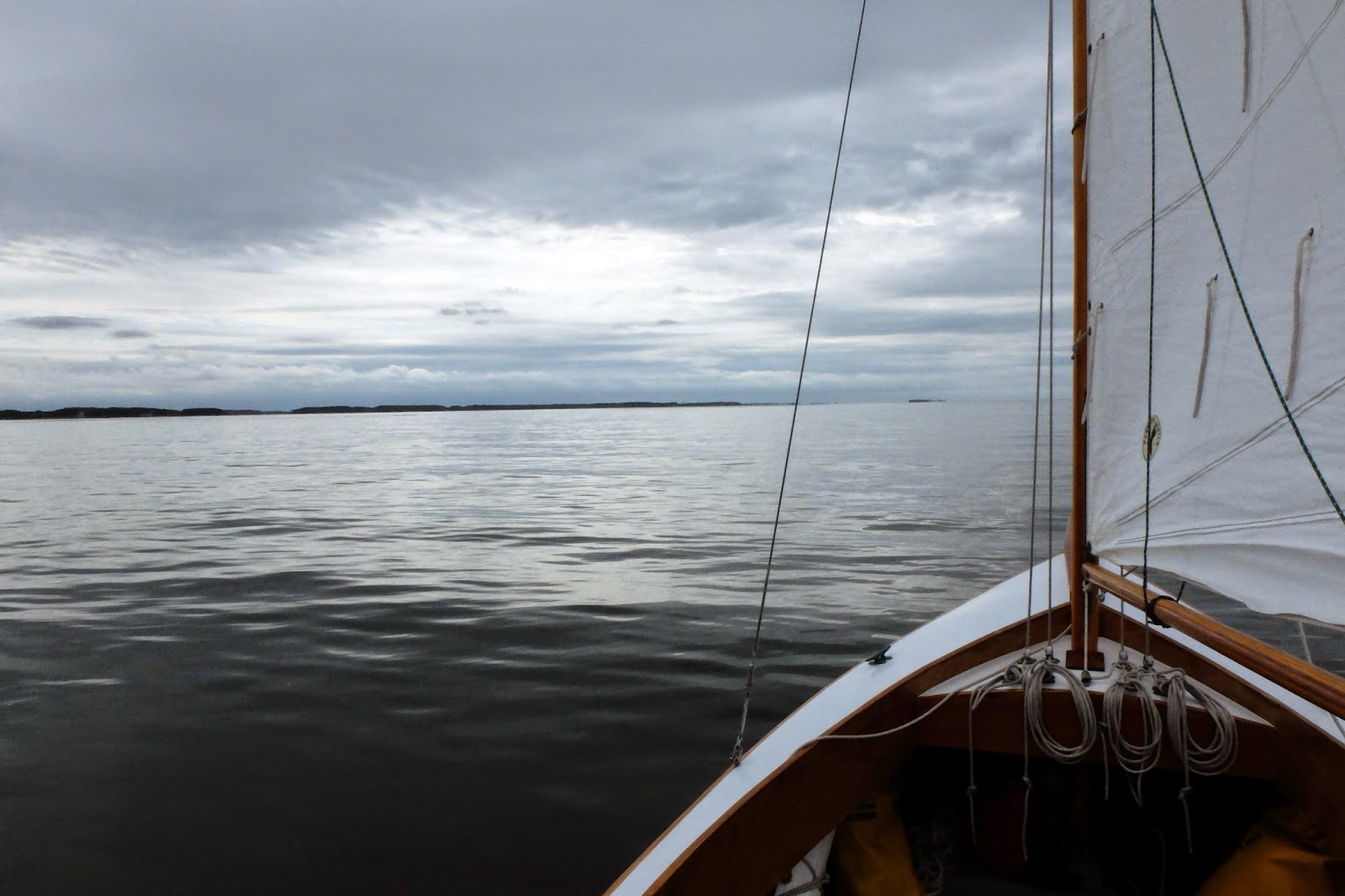 Under power at 10:00, calm water a mirror of the low overcast.  Wind now and then, not enough to fill the sails. 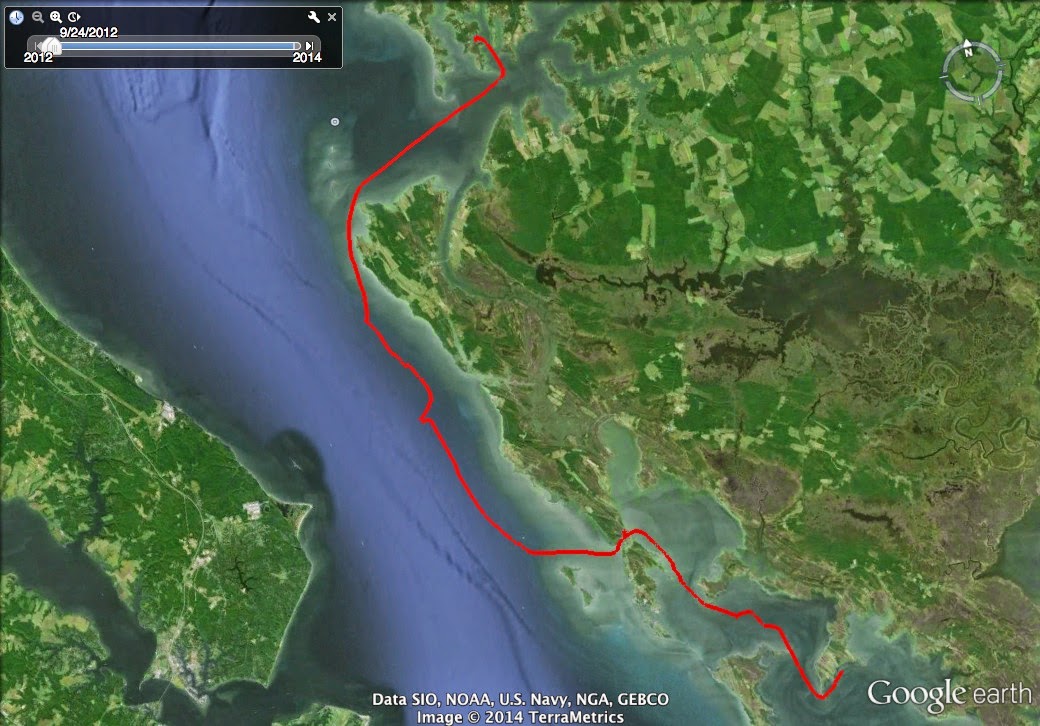 We've got the trolling line out while we track down the bay over the drop off where depths go from six or eight feet to twenty feet or more.  Known as the Punch Island Bar, fish feed along the edges of the drop-off.  Schools of menhaden ruffle the calm surface, brassy colored mouths gaping open as they feed.  I hope striper are below the school, but casting a spoon draws nothing more eruptions of white splashes from the baitfish. 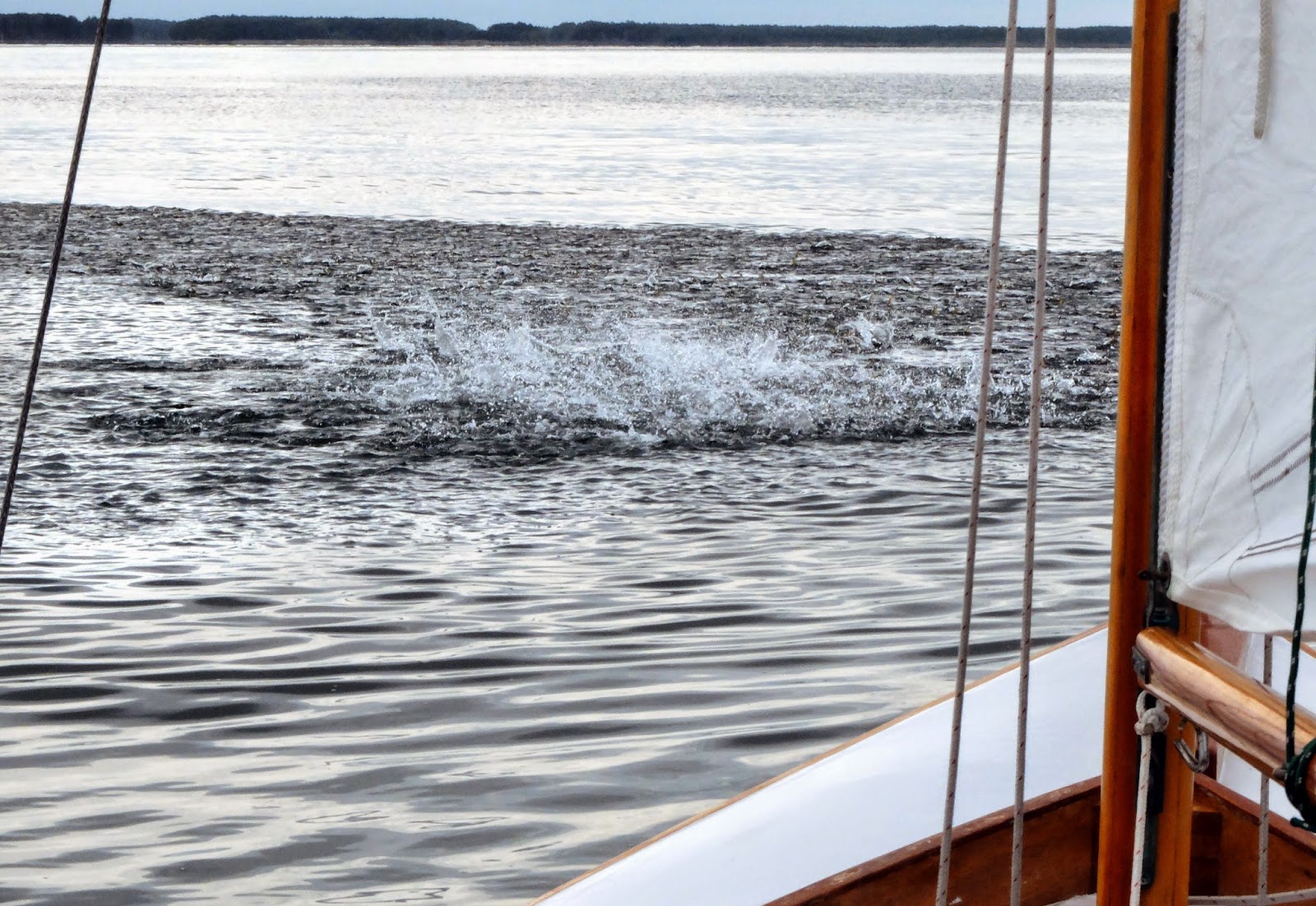 Motoring past the shallows called The Marshes I glance at the GPS to see that the channel leading to Fishing Creek is no longer marked on the charts.  Sticks and pieces of pipe lead the way.  I decide to turn into the boat ramp at Fishing Creek to drop off trash. 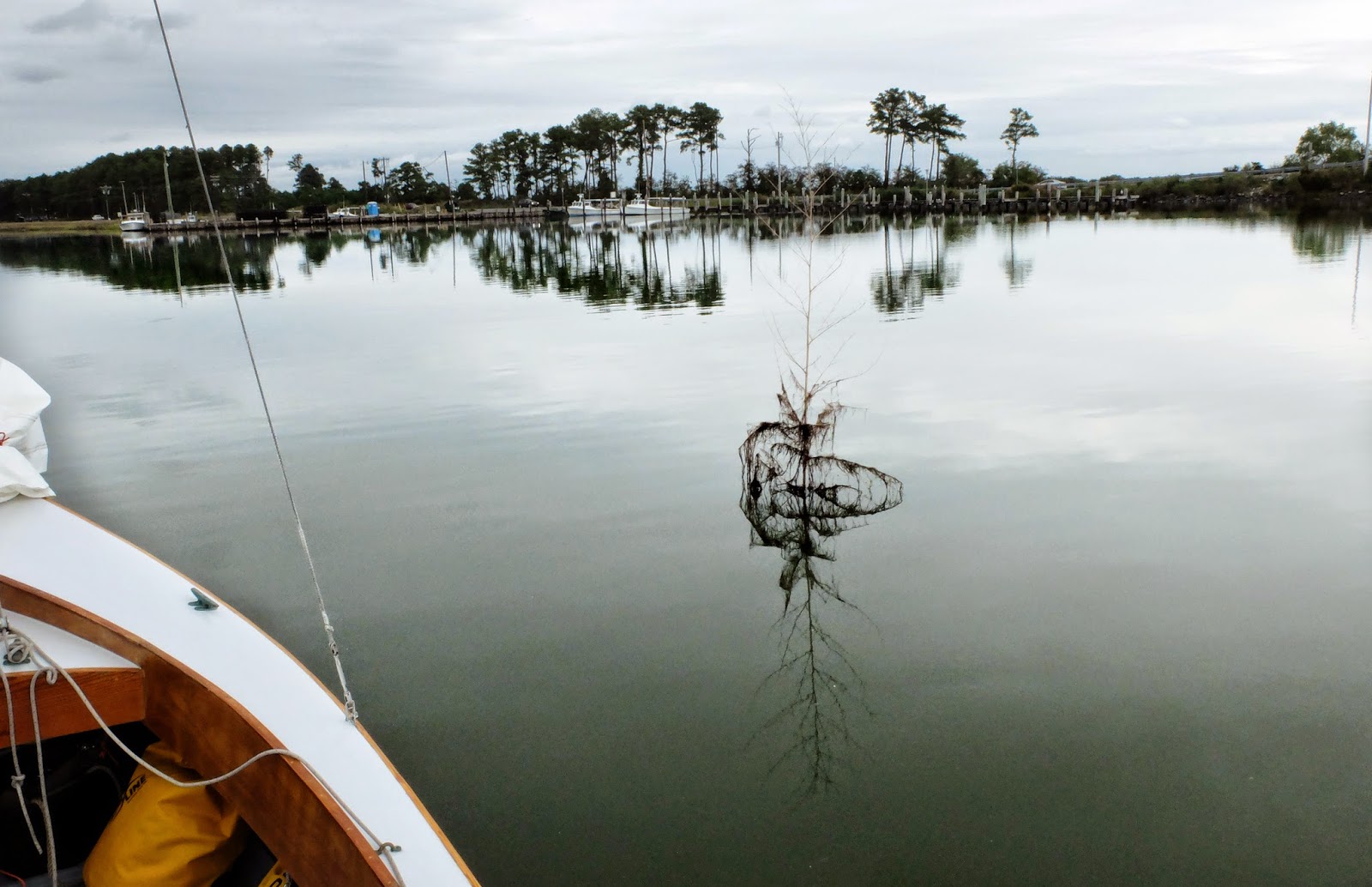 That channel the ramp is even narrow and shallower, tiny branches marking the way.  I raise both the cb and rudder and wonder how the deadrises at the dock get in and out.  They must go only on a high tide. 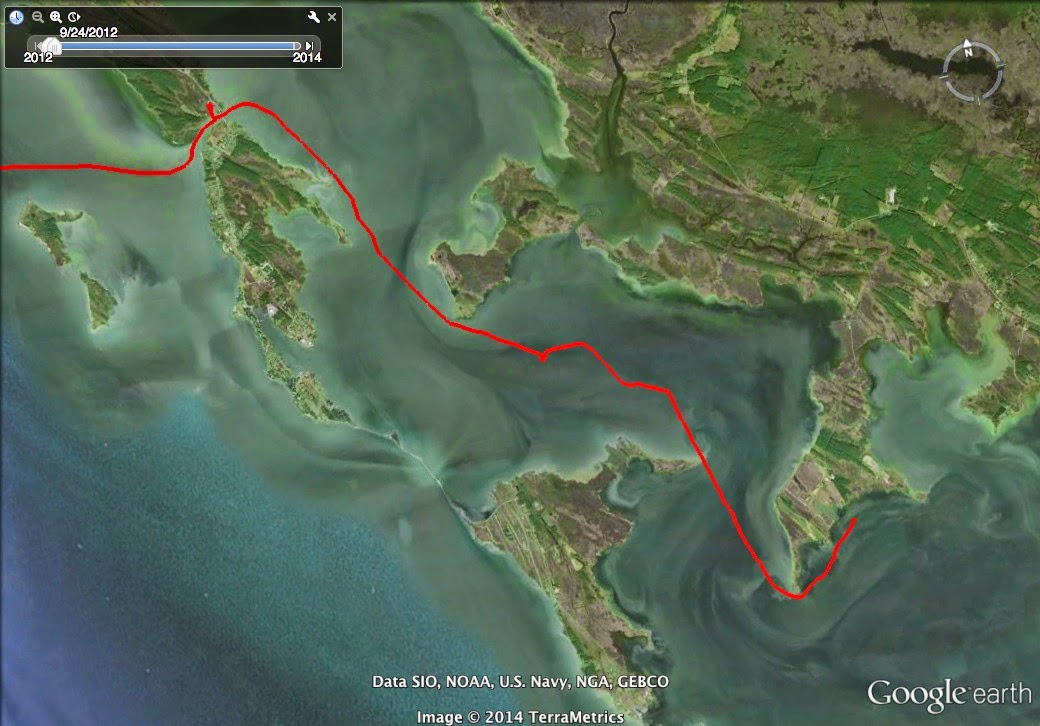 A light rain begins to fall as I drop off my trash.  A few cars passing by slow down to look at Spartina, then head south to the Hooper Islands.  We cast off, get briefly stuck in the mud before passing under the bridge and following the channel to the Honga River. 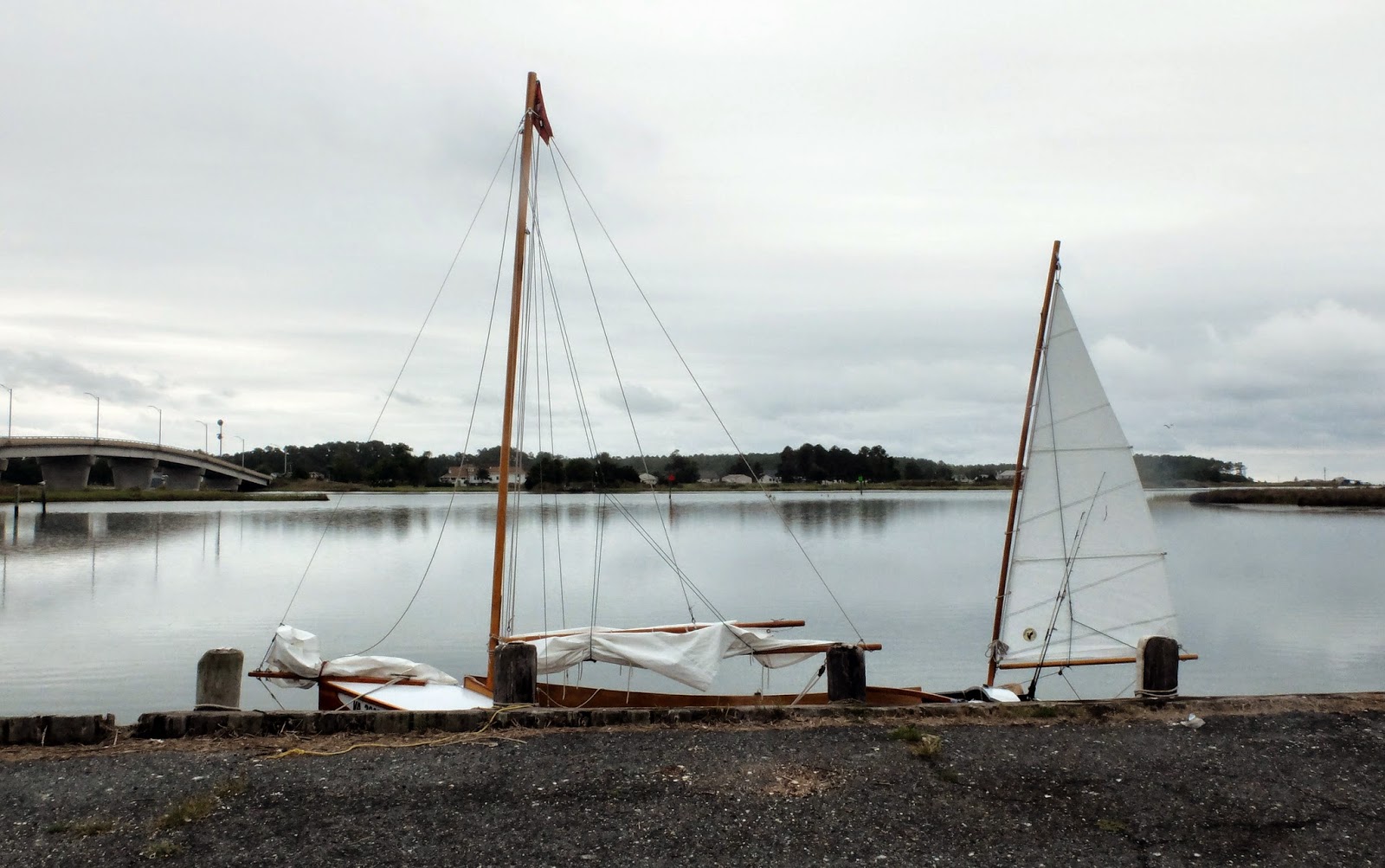 Dark, grey and misting, I have a hard time finding my way down the Honga.  Points and distant shorelines merge and I rely on the GPS for navigation.  In the afternoon I look west to see Upper Hooper Island disappear in a wall of rain. 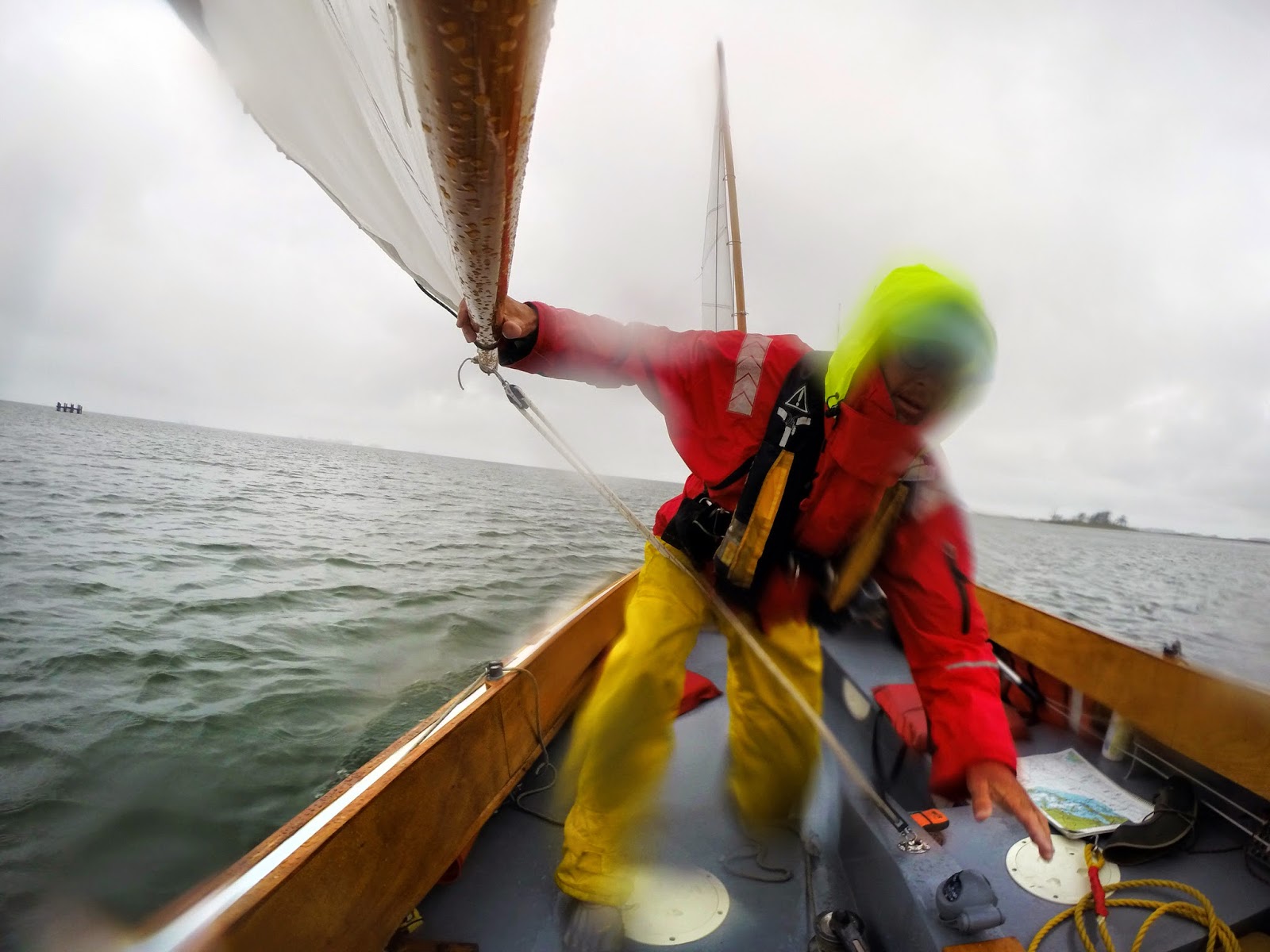 With the rain comes wind and we are under full sail.  Rounding Windmill Point we turn towards the protection of Pauls Cove, Spartina sailing in an unexpected squall.  Anchor down at 4:00 and I look to the south to see a large sailboat, maybe 35 or 40 feet in the foggy rain.  Soon a second boat, just as big, comes alongside her.  I've been told Spartina appears to be much larger than she is, particularly when under full sail and seen from a distance.  I worry they will try to come into the shallows to anchor.  After the captain confer they anchor out in the deeper water. 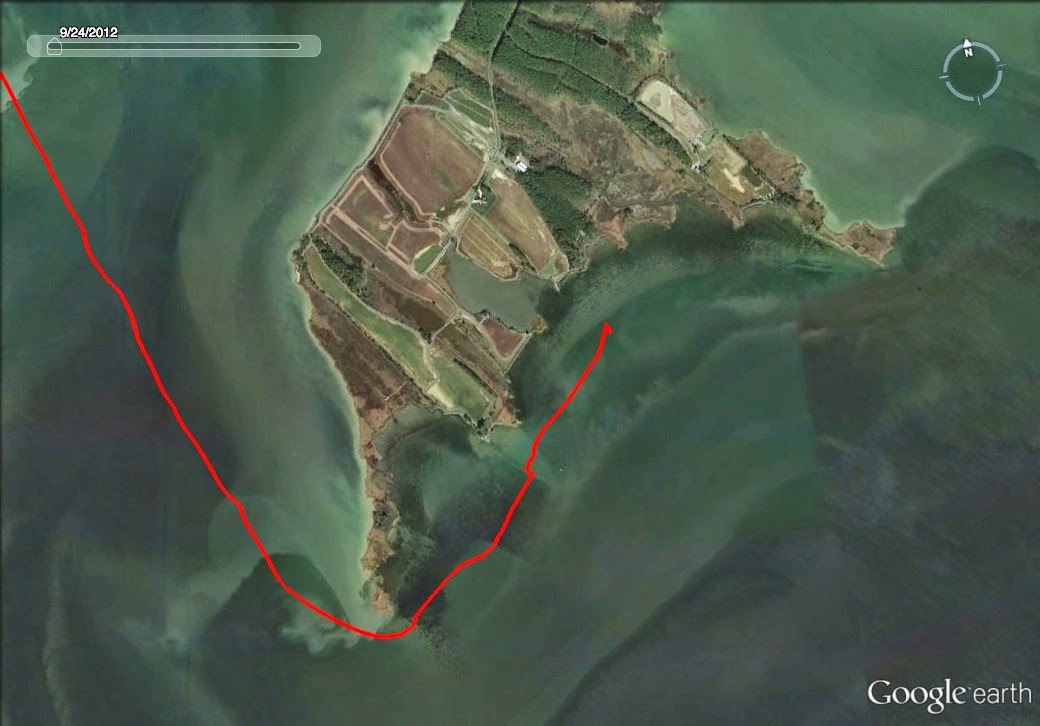 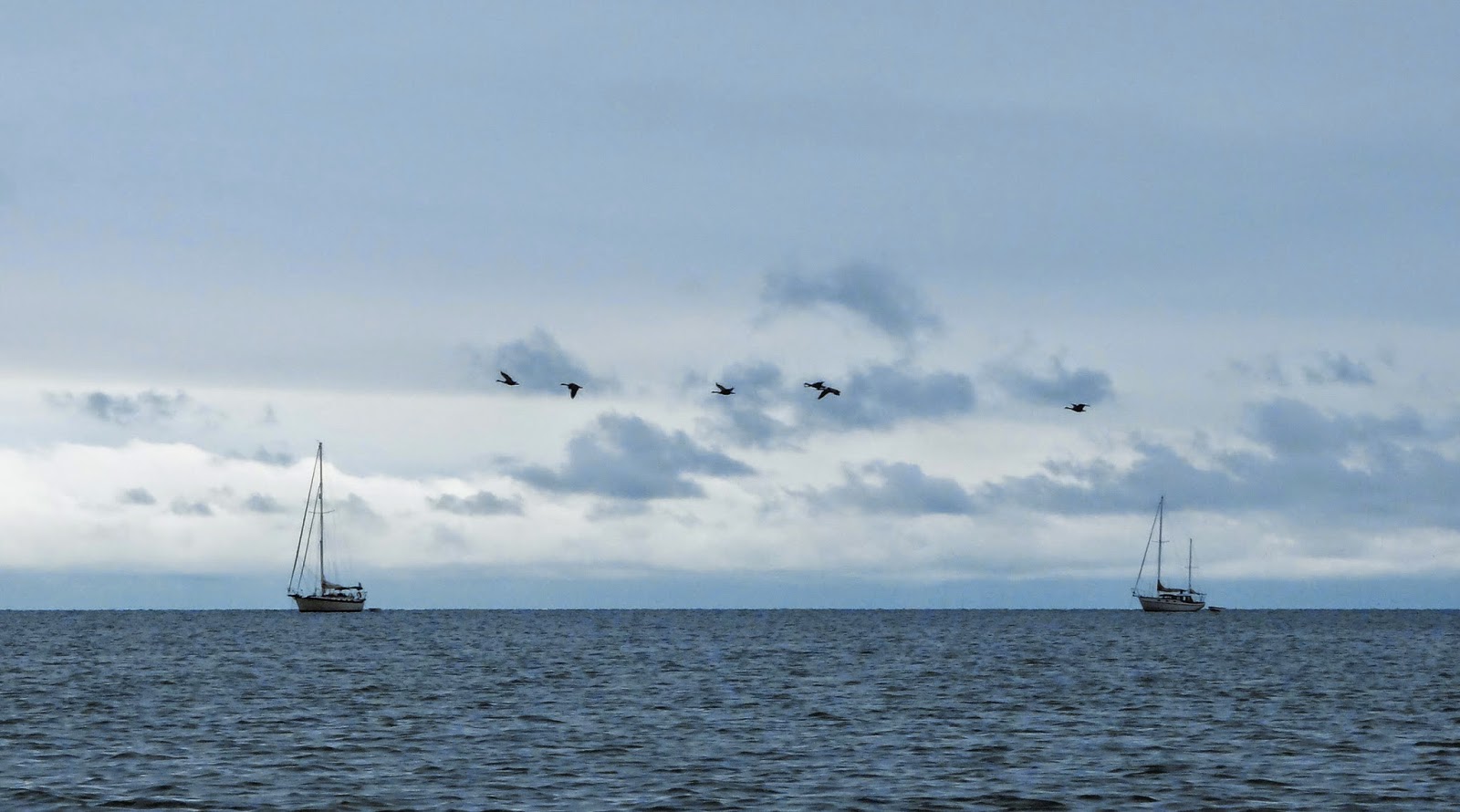 With a chance of more rain I set up the boom tent, folding back the forward vents.  The stiff breeze tunneling through the tent quickly dries Spartina.  A hot dinner tastes even better after an afternoon in the rain. Late evening I look out the boom tent to see a man rowing a dog to shore.  It is still windy and the man works very hard at the oars.  I worry about him and his small boat, and I watch them until the reach shore.

I check on him later.  He and the dog are back aboard the dinghy headed back to their sailboat.  Downwind they have a much easier trip. 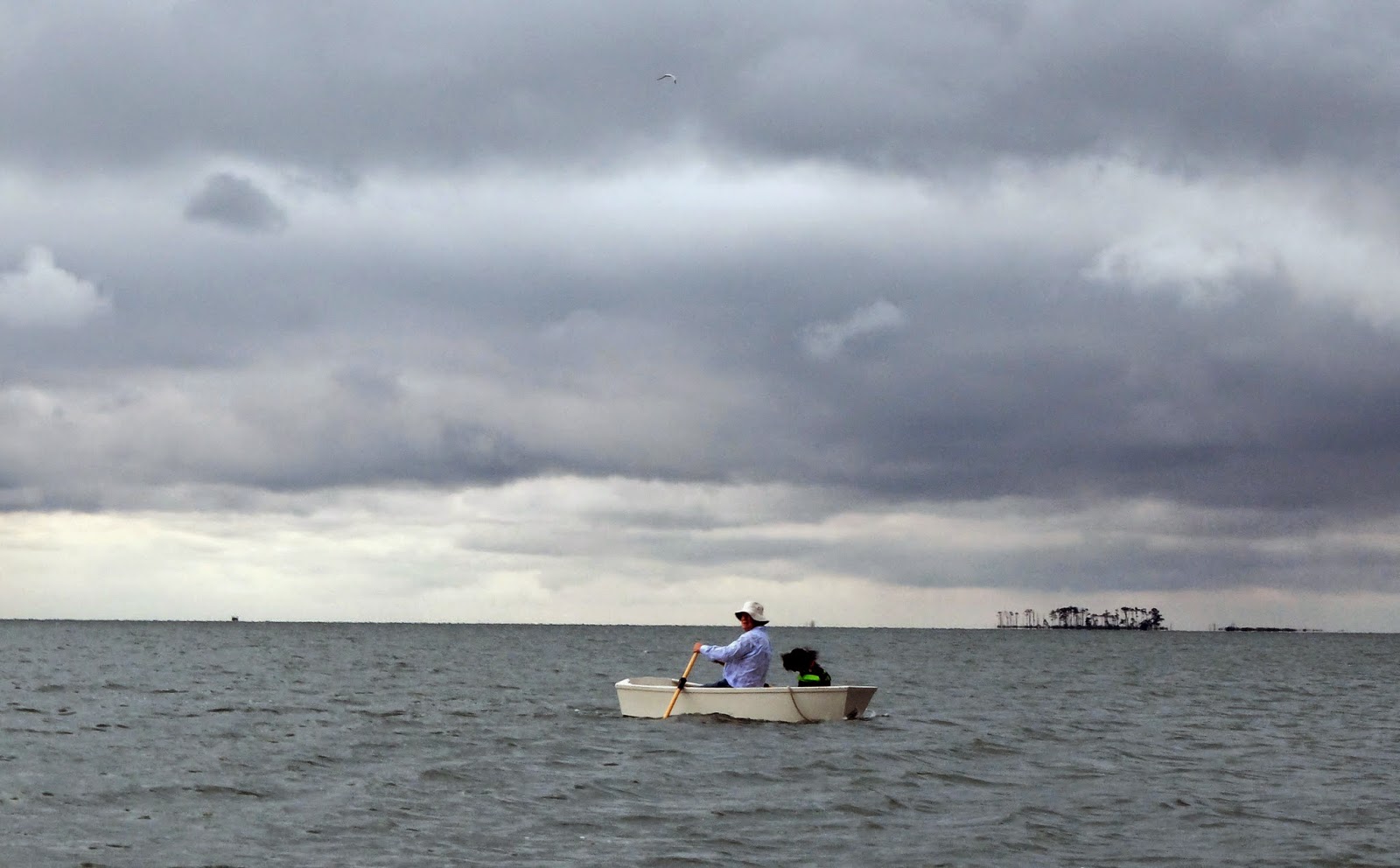 Six knots; now I am jealous.

Photo of anchored sailboats with geese in flight is spectacular! As is your trip report.

Please do keep up the great work!
Your posts of your adventures help keep me enthused as I continue the build of my sailboat.

Thanks guys. Ken, what kind of boat are you building?

Sorry for the tardy reply.

Ricelli Yacht Design "Rocky" 18' LOA 16"-9" LWL link is here if yo want to have a look http://paryachts.blogspot.ca/p/sail.html
Busy family life and short building season in Winnipeg Canada make progress slow, but I am enjoying every moment. Thanks for your interest.
Ken