The Indian River inlet has massive stone jetties and a fierce current.  I have seen 60-foot boats tossed around in the inlet like potato chips so I was leery of making the passage.  -Washington Tuttle 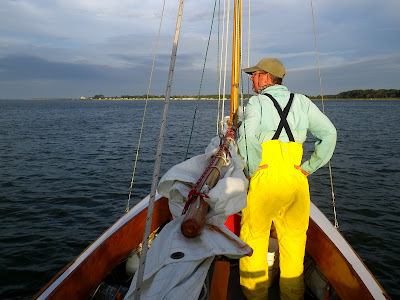 I wake at 6:15 to a steady NW breeze.  A front had come through overnight, the rain is gone and it is a clear morning.  Bruce gets up and we stow the boom tent and sleeping gear.  We have time to kill.  Spartina is packed and ready to go, but high tide is not until 8:39.  We want to wait for the tide to quit running before going through the inlet.


We listen to the weather radio - 10 to 15 knot NW wind for most of the day - perfect for sailing south to Ocean City on the ocean.  Bruce and I talk about our plans, what to expect on the ocean, the option of turning back to Indian River Inlet if it is too rough or the wind fails.  And we talk about the point of no return, where with time and tide we just keep going to Ocean City Inlet regardless of what happens.  I check the nav lights which are in place on the bow sprit and the boomkin should we get caught outside overnight. 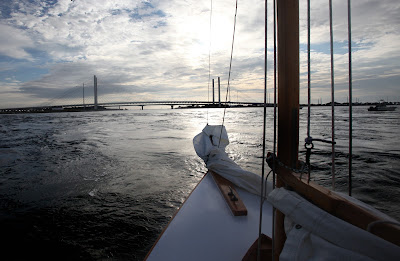 Anchor up at 7:40 we motor around an island towards the inlet.  I am worried about running out of fuel as we enter the channel so I get Bruce to pass back the fuel can and check the outboard, which I had already checked at anchor.  The tank is full.  Fishing boats speed by us on the way to the inlet.

Just after 8:00, sooner than I planned but I was anxious to get going, we enter the channel to the inlet.  I hope the tide would have slowed by now, but it has not.  The water boils in the inlet, my timing is bad.  It is choppy up ahead to the right, there is an huge eddy swirling to the left.  I throttle up to where we should be making four knots or more, we are making two or less.  Spartina slips and slides across the stream.  I look to a flag flying on a tall pole just north of the inlet, it is standing stiff in the wind.  The flag is at the coast guard station and I look down to their small boat docks to see three men in their dark blue coast guard uniforms, one of them is pointing at us.  We bounce through the angry chop.  Behind Spartina are waves rolling up to our stern and breaking, the waves going in the opposite direction of the running tide.  Three offshore fishing boats are racing through the inlet throwing up big wakes.  Two look like they will pass to the starboard and the other one to our port.  I try to keep a steady course, let them adjust their course to us.  The boats pass us as we near the end of the rock jetties, their wakes adding to the roiling water.  One fishing boat gets past the end of the jetty and makes a hard right turn, telling me there is deep water just beyond the end of the jetty.  The tide is still running but the water is calmer near the ocean.  We reach the end of the jetty, I pull the tiller to port.  We round the south jetty and are out of the inlet.  The water calms down immediately and it is quiet, a beautiful day.  There is a white sandy beach a few hundred yards to the west.  I look at the clock and see that it took 20 minutes to get through the half mile long inlet.  Only 20 minutes, but a long 20 minutes.

We raise the mizzen and Spartina points into the NW wind.   With a surprisingly crisp wind I tuck in both reefs and begin to raise the main.   An orange coast guard patrol boat coming out of the jetty behind us.  With a sick feeling in my stomach I remember the one guy pointing at us in the channel, wonder if they are coming to tell us we don't belong on the ocean.  I look down and focus on cleating the throat and peak halyards of the main.  I don't want to look up, I don't want to see the orange boat heading our way.  I wonder if my flares are in date, they'll ask us if they come over to Spartina.  Keeping my head down I ask Bruce to look around and see if an orange boat is approaching us.  Long pause, then he says "no."  I look up and see the coast guard boat heading north, away from us.  The jib is raised and we are sailing on the ocean.

We sail south off the beach at over four knots.  The water is calmer than I expected and the wind is steady.  With Bruce at tiller I shake out the first reef and then the second reef

We can see people walking along the shore in Bethany Beach.  On the dunes a man stands next to a woman pointing at Spartina.  I wonder what we look like from the beach.  The sand, the surf, a little open water, and three sails of a small boat.  And beyond that the wide open ocean.  I smile. 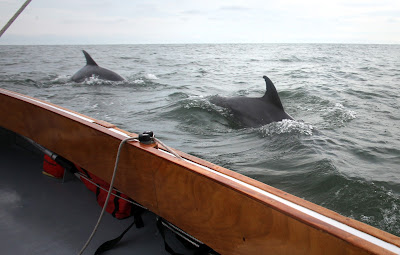 Dolphins are everywhere.  They come in close to Spartina, closer than ever before.  It is a relaxing, peaceful sail.  We follow the curve of the coast, staying a few hundred yards out beyond the breakers where the water is smooth. The sun peeks through the clouds. 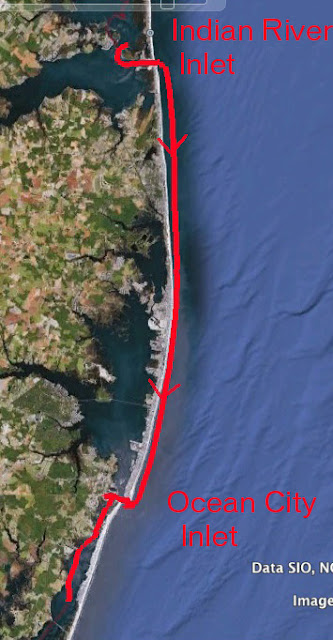 From Bethany Beach we can already see the tall buildings of Ocean City.  In between the two towns on the beach are fisherman, their four wheel drive trucks parked nearby and the long surf casting rods in holders stuck in the sand.  Some sit in chairs, others stand at the edge of the surf.  I look at a fisherman with my binoculars to see that he is looking at us with his binoculars. 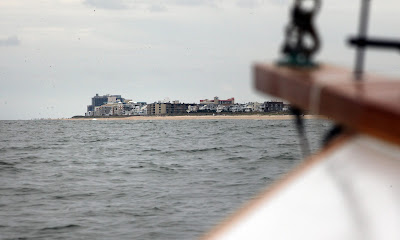 I breathe a sigh of relief as we approach Ocean City.  Bruce asks about something that looks like poles sticking up on the beach at a sandy point.  Looking with the glasses I see they are people, vacationers walking on the dunes.

The cloud cover moves in and I wish it was a few degrees warmer.  The wind varies and our speed goes back and forth between 3.8 knots and 5 knots.  The clicker on the trolling reel goes off.  I reel in a blue fish that is hardly bigger than the lure, our first fish after trolling up Chesapeake Bay, down Delaware Bay and now down the coast.  I think we should have done better than that by now.  I unhook the blue fish and throw it back. 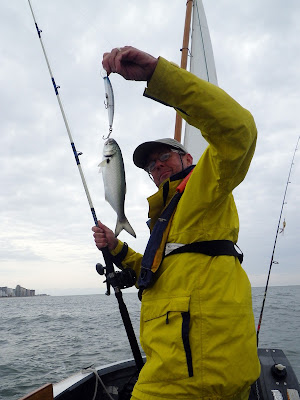 Just off the Ocean City tourist strip the wind falters and we are becalmed.  A school of dolphin swims near us.  A large powerful boat heads our way, a dolphin watching boat with just a few off-season tourists aboard.  They curve around Spartina and we roll in their wake.  They want to see our school of dolphin.

Bothered by the rumbling engines the dolphin leave and the boat gives chase, and then the wind returns.  This new wind, lighter than what we had before, is now out of the west.  It carries us south along beach with a classic old the boardwalk. 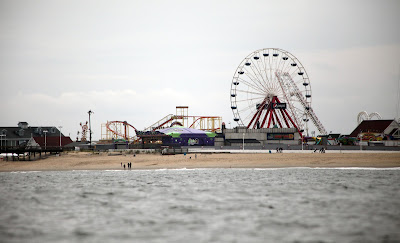 As Bruce photographs the ferris wheel at the old amusement park we realize that the park marks the end of the beach, the jetty to Ocean City inlet is right next to it.  It is not yet 1 p.m., we are here hours earlier than I had imaged.  I briefly consider trying to sail through the inlet, but realize with a west wind it is probably not a good idea.  We drop the sails and start the outboard.  Passing a channel marker we turn in towards the inlet and Spartina begin to slide backwards.  I throttle up the outboard, we still slip away from the inlet.  Throttling up even more and the best we can do is hold Spartina's position in the outgoing tidal current.  Thinking back to the tides I realize I had planned on riding a flood tide into through the inlet, but that plan was based on reaching Ocean City at 3:00 or 4:00 in the afternoon.  We'll have to wait. 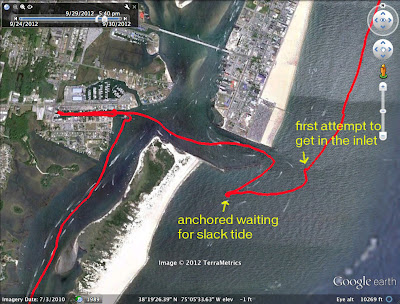 We motor across the current, round the south jetty and drop anchor in 10 feet of calm water.  I settle back in the aft cockpit and close my eyes for a moment.

"Steve....Steve.....Steve"I hear my name being called but can't figure out who is shouting.  I realize it it Bruce and then, with a start, remember we are on a boat near a jetty.  I jump up and look around.  Spartina is fine.  Bruce was shouting just to wake me from a deep, deep sleep.  "It's been an hour and a half" Bruce says, the tide should be slack.

Bruce is right with the time and tide, but the tide isn't on schedule.  We motor back into the inlet and I'm surprised at how fast the water is running out.  I throttle up and we make some forward progress.  I throttle up more, watching the people standing on the jetty and marking the forward progress  by matching them against the ferris wheel in the background.  I glance down at the gps to see we are making less than a knot when, with the outboard running at this speed, we should have been making four or more knots.  The currents, an hour after what should have been low tied, is still running at three knots better.

I watch the gps and see that the farther we get into the inlet, the better our speed.  A knot, then two knots, then close to three.  And we are through the inlet.  We motor into the harbor and to top off our fuel tank.  I ask the woman at the fuel dock about the tide running so late.  "Yeah, it does that sometimes."

We motor to a bait shop where I pick up a couple of bottles of iced tea, then turn south and raise full sail on narrow Sinepuxent Bay.  The mainland is to starboard lined with some upscale homes, Assateague Island with her beautiful wild horses is to port. 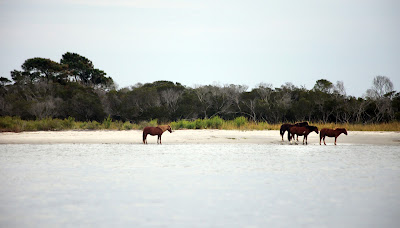 The afternoon wind comes and goes, we sail for a while then motor, then sail some more.  It is beautiful and peaceful.  The charts show very shallow water to the east and we cling to the channel markers.  Bruce is looking along shore hoping for a restaurant, but all we see further down the bay are woods and marshes with a couple of campgrounds.  Motor homes fill the campgrounds, the smoke from barbacue grills making us hungry.

In the evening the wind fails and we motor past two more channel markers, turn east towards Assateauge Island and drop the anchor in about six feet of water.

Dinner, then clean up the boat.  We are tired, we are relieved.  We've made it down Delaware Bay, through two inlets and an ocean sail.  Does it get easier from here? 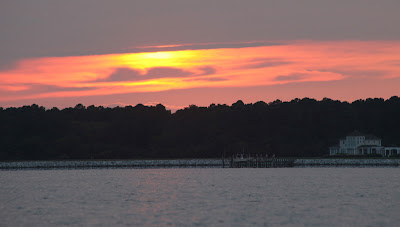 Well I can feel for you when challenging the tides ... we find our schedule often misses the appropriate time to enter or exit an inlet without bucking currents. It can be tense no matter what size sailboat.