The morning star hung suspended beneath the crescent moon due east before dawn.  Fifteen minutes to stow my sleeping gear - bivy, sleeping bag and ground pad - and I raised anchor under a strong NE wind just as the false dawn appeared.
I sailed across the shallows of Maw Point shoal under mizzen and jib, both the centerboard and rudder partially raised.  At marker "2" I heaved to, put down the rudder and cb, raised the double reefed main.  I sailed southeast at five knots for Raccoon Island. 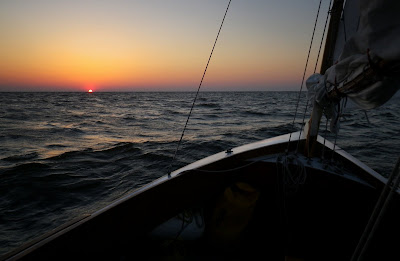 At 7 a.m. I passed the "NR" marker at the entrance to the Neuse River, ten minutes later Raccoon Island - and the cloud of birds that flew above it -  was in sight.  I hadn't seen the island since 2007 when Bruce and I anchored behind it on our first cruise together.  It was not the best place to anchor - poor protection from the wind, markers warning of of military lasers and shadowy power boats hovering in the channel late at night.  But still, it reminded me of the fun and adventure we had had on that first trip.
I was glad to enter The Narrows behind Raccoon Island - the calm water in the channel finally gave me the chance to peel back the foil top and enjoy my cup of fruit for the morning. 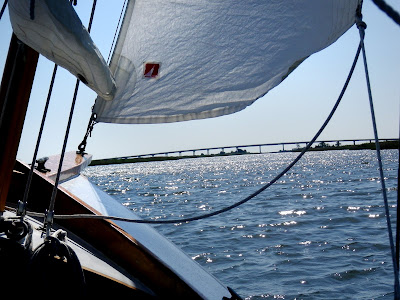 My goal for the day was a shrimp burger at Morris Marina just north of the little town of Atlantic on Core Sound.  For that sandwich I would cross the Neuse River, sail down West Bay and West Thorofare Bay, take the Thorofare Canal beneath the bridge to Thorofare Bay, round Hall Point onto Core Sound and sail south the the marina.  That better be one good shrimp burger. 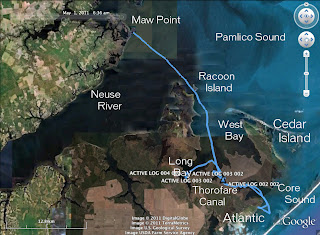 The wind stayed crisp and cool throughout the morning.  I sailed down West Bay at five knots, then turned closer to the wind and reached West Thorofare Bay a little befor 10 a.m.  Once in the Thorofare Canal I motor sailed into the wind, passing under the bridge at 10:15 and then raising full sail on Thorofare Bay.  Doing an easy five knots I passed the rows of fish stakes at Hall Point and spotted the Portsmouth Island ferry headed south.  That made navigation pretty simple for me - all I had to do was follow the ferry to its homeport at Morris Marina. 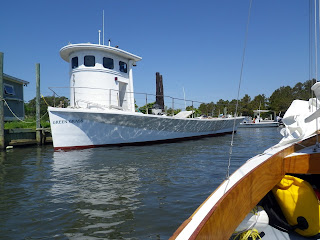 A little after 11 a.m. I dropped the main and jib outside the channel to Morris Marina and motored in.  Above is a photograph of their older ferry, the "Green Grass," which dates back to the 1970's.  I slipped by that ferry and the newer one, "Donza Lee," and tied up at a finger pier on the narrow creek. 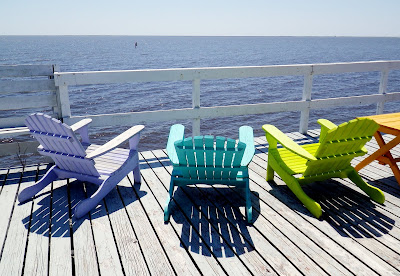 I ordered my shrimp burger at The Grill.  "How do you want it?" the cook/manager/waitress asked me.  "Surprise me" I told her.  So I get the sandwich, about ten deep fried shrimp on a hamburger bun with tartar sauce and a nice layer of cole slaw, fries and a dinner salad.  Plus a nice big glass of sweet tea.  An excellent lunch.
The grill is a simple building up on stilts on the waterfront.  It has a deck with a view of Core Sound and plenty of comfortable chairs.  I could have eaten my lunch out there, but chose to eat inside while enjoying the air conditioning and conversation with a couple of the locals.  It was a very nice time and I will be sure to drop in again on the next sail up Core Sound. 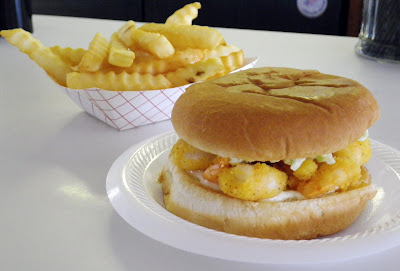 Less than forty minutes later I was headed back out onto Core Sound on Spartina.  A good lunch, conversation with the locals and a chance to relax.  What more could I ask for?  The wind fell off towards Thorofare Bay, then kicked back up against as I approached the bridge. 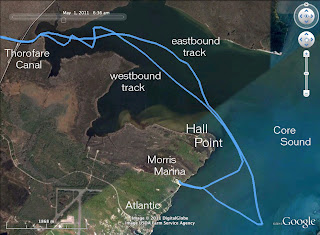 Under a cloudless sky I tacked back and forth across the entrance to the Thorofare Canal, sailing back over waters that I had covered during the morning. 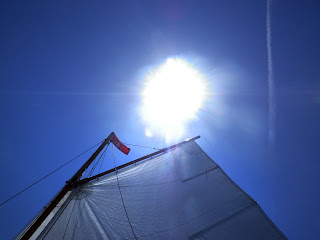 As I approached the bridge I could see the current running with in the channel.  This was the third time I had gone through the canal, the first time that both the wind and the currents were with me.  It would be an easy sail down the canal. 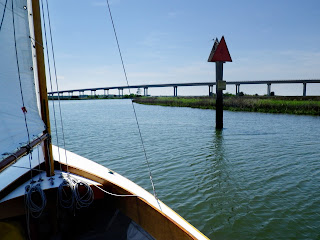 I slipped alongside the marsh grass casting a lure toward the bank.  I got the feel for casting and steering the boat at the same time.  Tiller between my legs, I would nudge the boat up into the wind as we skirted the marshes, casting out a bright green lure with a bright pink lead head.  I eased along very comfortably, casting to the narrow drains and channels along the canal.  It was the perfect way to work the shoreline.  Now if someone would show me how do that AND CATCH FISH at the same time I would be a very happy man.  But it was not to be, no fish on this trip.  But that's ok, no complaints from the crew. 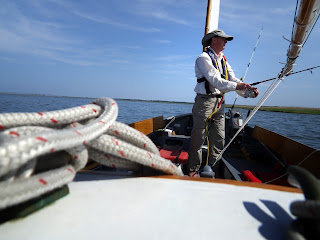 I sailed back up West Thorofare Bay, rounded Long Bay Point and then turned south on Long Bay, anchoring a little after 5 pm about two miles east of the Old Canal.  Dinner was vegetarian - cous cous and roasted sweet peppers with parmesan cheese.  A good day on the water. 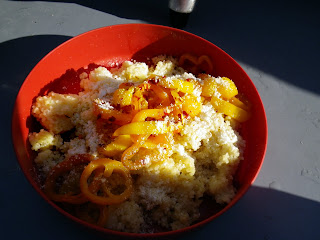