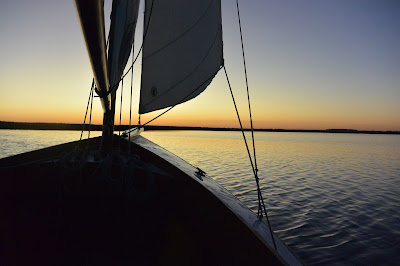 Calm and clear overnight.  Up before the dawn, a light NW wind.  Sail off anchor at 6:46, tack towards the marsh, come about and follow yesterday's track back down Hail Creek.  Two terns make a splash as they dive in the creek, then fly away quickly as more terns arrive to try and steal their catch.  A gentle sail at less than 2 knots towards the Chester River. 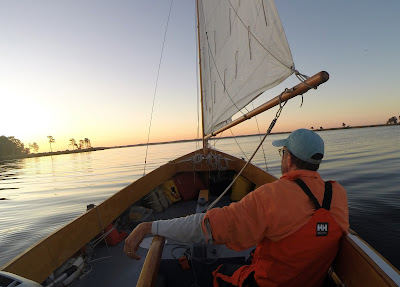 More of a breeze out on the river, 2.8 knots on a tack towards Kent Narrows.  It's just a few miles and we enter the channel under power for the 9:00 lift.  The tide is ebbing and the narrows are choppy. I hold alongside of the channel at the visitor center pier then cast off, idling out in the current until I hear the bells announcing the bridge lift.  A friendly wave from the bridge tender, Spartina is the only boat to go through. 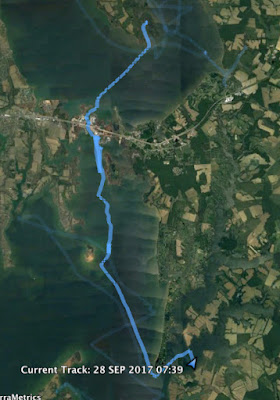 It's mid-morning and I decide lunch at the narrows would be good.  It's too early though so I sail in the light breeze and watch a couple guys in a small boat setting out and retrieving crab pots.  A little to the south a waterman is setting out his trot lines.  We tack up into the coves and just relax on the pretty morning.  I tie up at The Jetty before the restaurant opens, the waiters saying Spartina will be fine there as I head out for a nice long walk.  Then back as the restaurant opens for a nice salad in the shade while I charge my phone. 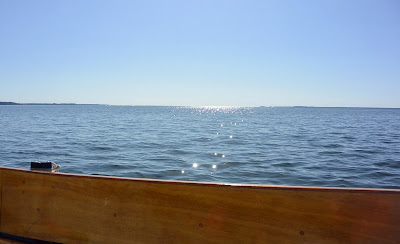 We cast off from the dock early afternoon, no wind so we motor and troll south on Prospect Bay.  The wind comes and goes near Parsons Island, sailing now in the light wind and casting to schools of stripers breaking the surface.  A small striper brought into the boat and quickly released.  St. Michaels is not too far away and I could easily be there by evening.  But I want to have some more time on the water. 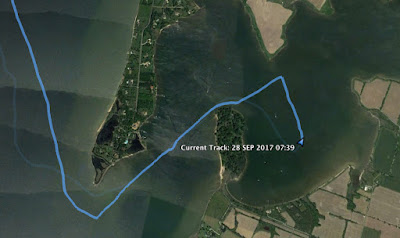 By 4:00 headed to the Wye River, rounding Bennet Point with schools of striper feeding at the river's mouth.  Cast and bring in another fish, again released.  At the end of Bruffs Island we sail southeast into Shaw Bay, we have the anchorage to ourselves.   Anchor down at 5:30. 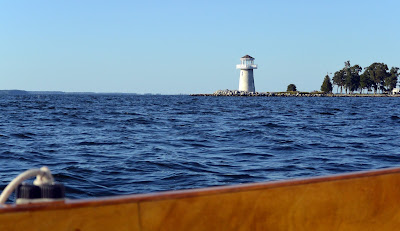 Hi Steve, Thanks for the details of your trip. I love Shaw Bay!

Thanks, Shawn. It was a good trip. Fun to go back through the log and photographs to remember many things I had already forgotten.
steve