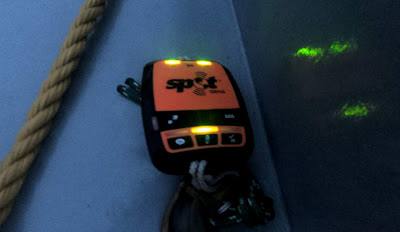 I wake at 5:30, stow the tent and sleeping gear in darkness.  Tie in both sets of reefs and put on foul weather gear.  The northeast wind and rain arrived in the early morning hours, more wind and less rain than forecast.  I can see channel markers running down the Chester River but I can't see the point of land to the southwest. 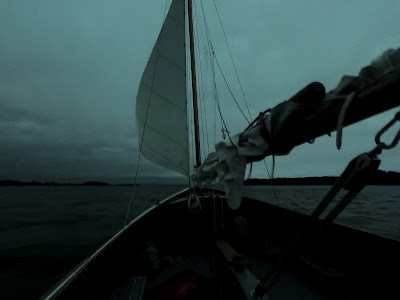 Sail off anchor with mizzen and jib at 6:45 just as I can distinguish land from the water.  A deadrise comes into the bight to set out his trotlines, SPARTINA briefly caught in the boat's spot light.  Making 5.3 through dark water.  Spaniard Point at 7:00, low overcast hangs over the Chester, lights glowing on the Russia house at the mouth of the Corsica River.

Jibe around the fish trap above Piney Cove at 7:45, pass Hail Point at 8:10, 3.9 kts.  I keep looking over toward Queenstown Creek, expecting to see the Curt on ANNIE.  Markers for Kent Narrows begin to show at 8:30, 4.2 still under mizzen and jib.  ANNIE's green hull and tanbark sails seem to pop up out of nowhere, sailing past Hail Point along Eastern Neck. 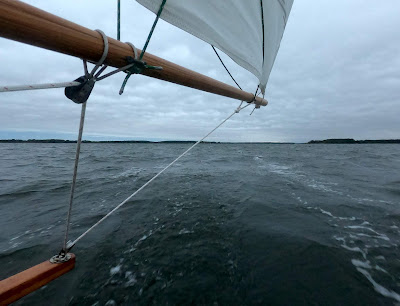 Very rough water all of a sudden outside the channel to Kent Narrows, 5.1 kts.  Round up to drop the jib, clipping into the safety line on the foredeck as tie down the sail with SPARTINA bouncing on the rough water.  Mizzen down and under power, hoping to make the 9 a.m. lift but I'm cutting it close. 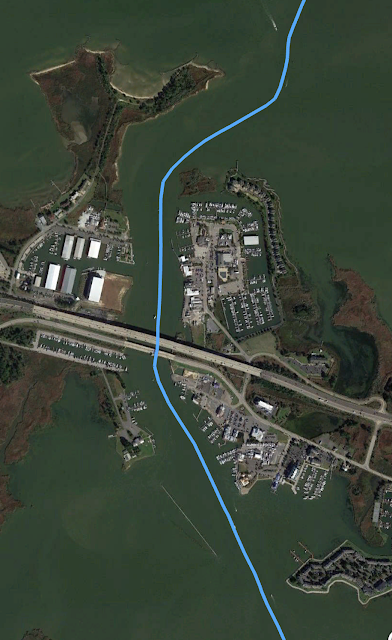 At Marker 13 I radio the bridge tender for the next possible lift.  It is noisy with the outboard running and all the gusty wind.  "We have an opening in one minute, I assume you are not going to make it."  I realize I'm behind the little island at the mouth of the narrows, with the trees he can't see SPARTINA.  No way I can be there in one minute anyway.  I radio back that I'm now at marking 15.  Another garbled reply, "you the small boat?" I say yes.  And the tender has mercy on me, or at least I think he does.  Was that a "keep coming" I heard over the radio?  Full throttle and I'm four maybe five minutes late as I approach, the road barriers go down and the bridge lifts just ahead of the mainmast.  I look up at the tender who is peering out of the window above, wave and say "thank you" over the radio.  He waves back, leans out and takes a photograph of SPARTINA. 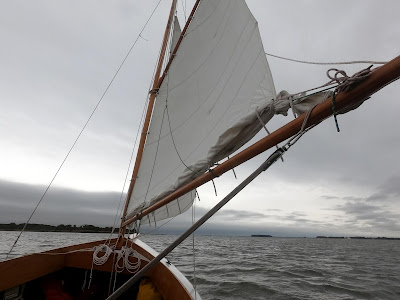 Just out of the narrows I raise mizzen, double reefed main and jib, headed to Prospect Bay at 5.2 kts.  Three dead working the far side of the channel. 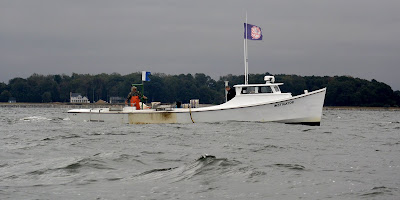 At 10:00 I shake out the second reef.  We've got a single tack to St. Michaels.  Wind and waves down the miles river, gps shows 8.4 in a gust near Deepwater Point.  Past the point at 11:10, into the docks at St. Michals before noon.  Waves out of the east are rolling into the waterfront at Chesapeake Bay Maritime Museum, my first choice for a dock is a bad one, my second choice - up against one of the museum's buildings - is better but still rough.  At least I can tie up and ask about a better spot. 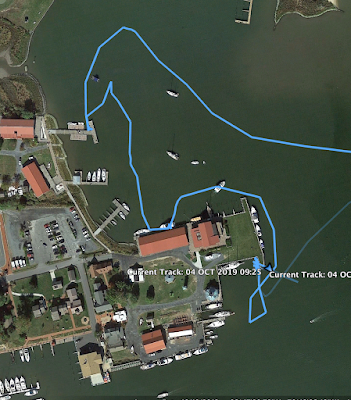 The dockmaster comes out to help me cast off, I motor around the point where the dockmaster helps me tuck into to a perfect little spot protected from wind and waves. 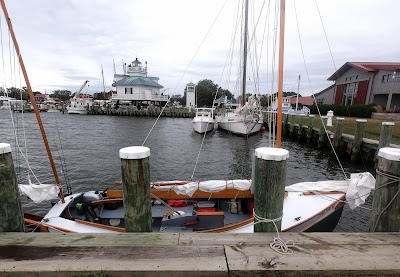 It's lunchtime so I walk over to St. Michaels Crab & Steak House for a Caesar salad and some seared tuna.  I sit at the bar where can look out over the harbor.  The wind keeps blowing. 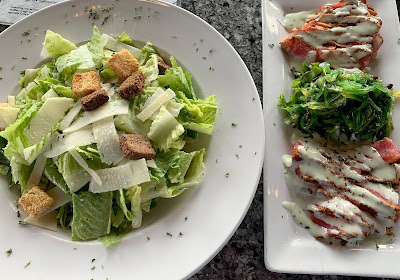 I spend the afternoon walking around the museum - one of my favorite places on the bay - checking out the buildings, the floating fleet and the shipyard with the tall ship DOVE under construction. 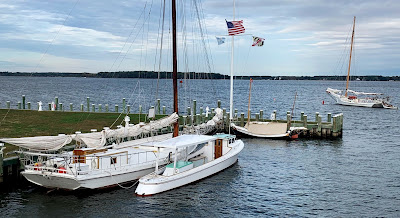 Evening approaching I've got the boom tent up and SPARTINA rigged for sleeping, I think about heading in to town for dinner.  As I walk across the museum grounds I hear someone calling my name.  It is Kristen, a longtime friend and the museum's president.  She comes to check out SPARTINA nestled up against the dock, then gives me a quick tour of the shipyard.  She's got an errand to run but says "I'll pick you up in 20 minutes for dinner."  How nice.  Fresh soft shell crabs for me, and what looks to be the world's best tenderloin steak for her. 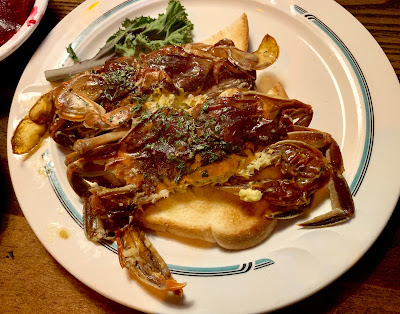