I wake to hear the halyards in the marina baggings against the masts. A front had moved through overnight  with a forecast of a west wind in the morning.  I had no idea that it would bring this much wind.
I walk to SPARTINA to take down the boom tent, feel the wind and look at the water.  The harbor is as rough as I have ever seen it.  Across the harbor and beyond the jetties I can see waves rolling across the bay.
On a second trip to SPARTINA I bring my duffel and charged batteries, wondering if I really want to sail today.
Back at the hotel I check the weather on my phone.  Sustained wind in the high teens, gusts 28 mph.  For the next couple hours the wind is out of the west southwest.  By midday it swings to the southwest.  If I go I better do it now.  I put the hotel key on the table and walk back to SPARTINA. 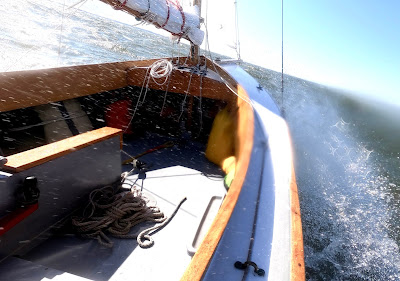 Casting off at 9:50 I'm blown across the slip into a piling.  I push off, gun the outboard in reverse.  Motor out of the marina, around the shallows in the center of the harbor and then through the rock jetties.  The bow lifts and drops in big waves coming across the width of the Bay.  Mizzen up and then jib at 10:05.  Big waves, very rough.  The boat falls off to starboard.  I pull the tiller towards me and jibe, turn south and hope that I can point into the center of the Chester River. 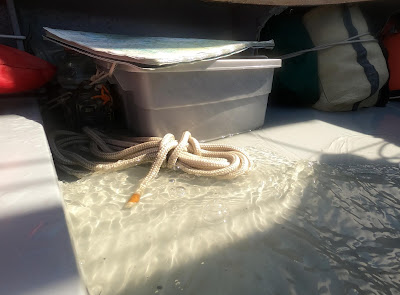 Making 5.5, 6.0 in the gusts with the bow pointed towards Kent Narrows.  Wind is just forward of beam.  Waves slap the starboard side of the hull, spray flies in the air and falls into SPARTINA.  I haven't collected that much water in a long while.  Steady progress down Eastern Neck. 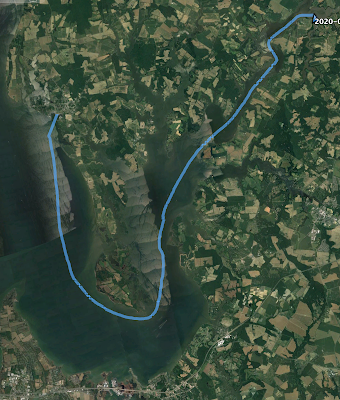 11:05 off Eastern Neck Island.  A little calmer in the lee of Kent Island.  Still strong wind but the waves are not as big.  I search in the rough water for a fish weir, wanting to go outside of the fish trap in deeper water, not on the shallows inside.  11:10 I see the trap, it is comfortably inside of our path. 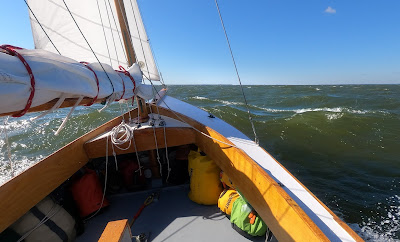 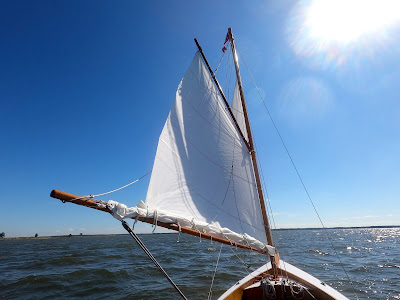 In the lee of Eastern Neck Island I round up to shake out the reefs and set full sail with the wind on the port quarter, making 4.6.  Easy sailing now and I put out a trolling line.  Just a few minutes and a striper grabs the lure just off Reeds Creek at 1:00.  I round up into the wind and bring in a nice 24 inch fish. 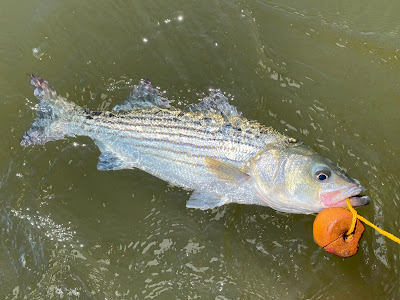 Off the Corsica River at 1:25, doing 5.7 in the gusts wing and wing.  Passing Ashland Landing, 3.6 along shore as the Chester River winds through the farmland.  Cormorants spread their winds to balance in the wind as they stand on the nets of a fish weir.  Off Melton Point at 2:45, 4.6 with wind forward of port beam on the short reach to Northwest Point. 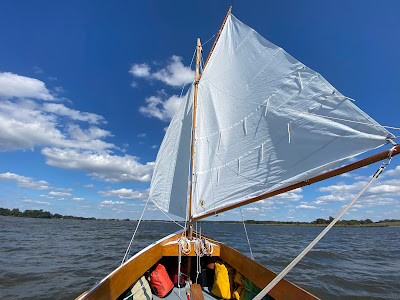 Anchor down 3:30 in a calm pocket of water inside Southeast Creek.  I could easily make it to Chestertown but I've got a fish to clean. 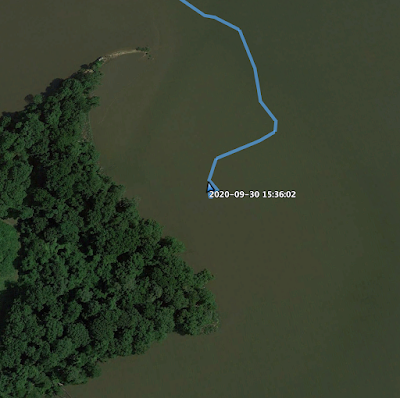 Pan fried striper served over boil-n-bag rice for dinner.
22.87 NM for the day. 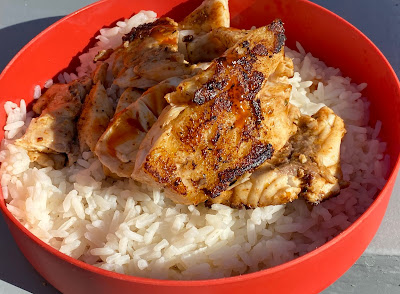 What a day! Paprika on the fish? Looks yummy :)

Nothing like a good tumble... and then the tasty payback.

It really was an all around great day, from hard sailing to downwind sailing and a fish on the line. I don't think it gets much better.
steve