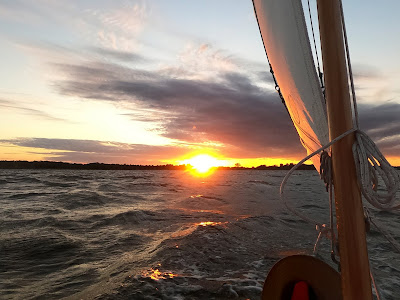 The phone alarm wakes me at 6:00 a.m., unusual for me in that I typically wait for the birds in the marsh to announce the day.  Still dark.  I want to sail and I want to get an early start.  Still small craft advisories, this time with a west wind until midmorning and then it will swing to northwest.  Sailing out to Chesapeake Bay is out of the question, the opening of the Chester River would be much too rough and there is little in the way of shelter.  Instead I'll sail up the Chester River to Chestertown.
I leave on my merino wool thermals from the cold night, layer on pants and shirt and then the dry suit.  Mizzen up an under power at 6:50.  Waves out of the northwest in the channel leaving Queenstown Creek.  I power through the bouncy water in the narrow channel.  Jib up at 7:15 just as the sun comes over the horizon. 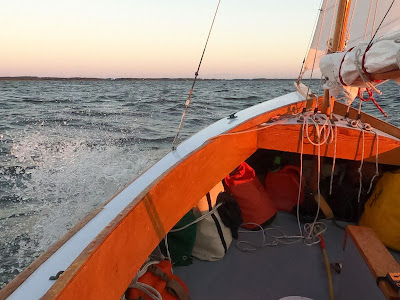 Very rough but quickly I see that I can mark a course under mizzen and jib to round Piney Point.  Making 3.7 in choppy water, a wet ride with spray coming over the port side.   Glad for the dry suit. 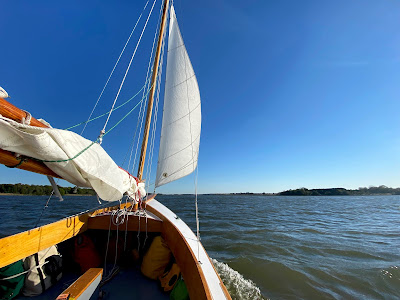 Round Piney Point at 8:00, raise up the cb for a downwind sail.  A flock of five bufflehead, small sea ducks with bulbous heads, takes flight just off the bow.  Buffleheads come with cold weather.
Making 4.6 then 5.9 with a gust and a push from a wave.  Off Reed Creek 8:15, ten minutes later passing the Corsica River where another flock of buffleheads take flight, 4.7.  Off Spaniard Point 8:40 and the river begins to narrow.  Off Comegy's Bight 8:55, then round Deep Point into calmer, more protected water, 3.1 under mizzen and jib.  Pass the twin silos on the eastern side of the river, 4.7 in a gust. 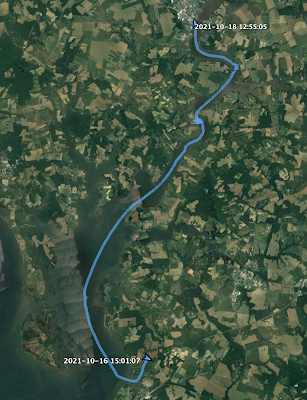 Approaching Melton Point at 9:00 I over the marsh and small trees to see two raked masts coming downriver.  The beautiful Pride of Baltimore II comes around the bend.  I stay just outside the channel to give the topsail schooner plenty of room.   Waves from the crew gathered up forward and two more people on the stern. 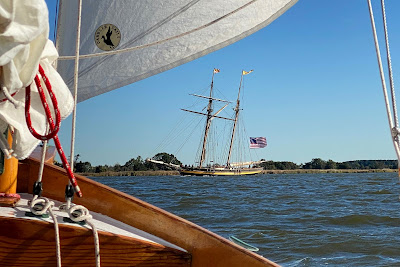 Round Melton Point at 10:00, lower the centerboard for tacking against the wind at the tide to Northwest Point.   Terns feed over a school of striper.  Fall off the wind 10:45 as we round Northwest Point.  Off Southeast Creek 11:05, strong gusts building on the port quarter.  Off Rolph's Wharf 11:05 and turn on to the Devils Reach where I learn how that stretch of water earned the name.  Try tacking into the wind that funnels down the reach, making no progress at all against the battering wind and opposing tide.  Jib down and under power, sometimes making just 1.8 into the wind and chop.  Hard going.  At Primrose Point the river bends to the east, glad for calmer water.  Docked Chestertown Marina 12:35.  The marina is closed for the day, which means I tie up with no slip fee.  How nice. 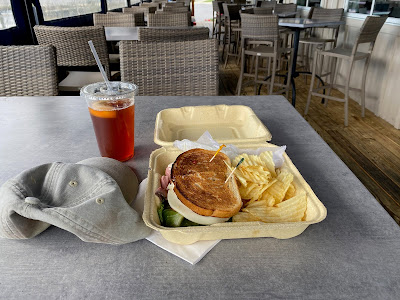 I pick up a sandwich from Play It Again Sam just a couple blocks from the waterfront, carry it back to the marina and enjoy it on the enclosed deck of 98 Cannon Riverfront Grille.  The restaurant is closed today but the owner is inside.  He sees me and pokes his head out the door.  Just hiding from the wind, I tell him.  He smiles, says I am welcome to stay. 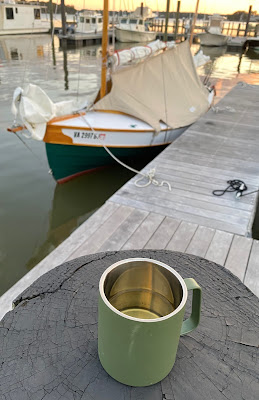 Dinner is a sub from the sandwich spot and chardonnay from a health food store.
Evening, darkness falls and I sit under the boom tent, reading the news and sipping a cup of wine.  I hear a couple walk by, stop and begin talking about SPARTINA.  "That mast is too short," says the man.  The woman agrees.  Then the man notices that it is a gaff rig.  That might make a difference he explains to his wife.  No, she says with a certainty that surprises me, that mast is too short, the boat can't sail very well.  A bright light from the nearby parking lot shines on the boom tent and I can see the silhouette of the man as he quietly walks up alongside SPARTINA.  I'm ready for him as he ducks his head into the boom tent.  "Hello," I say.  He is a little surprised to see me there but says hello, tells me he and his wife were just talking about my boat and the rig.  "How does she sail?" he asks.  Pretty well, I tell him.  In fact I hit 5.9 knots coming up the river today under just mizzen and jib.  "Really?" he says.   "Really.  Yeah, she sails well."  He wishes me a good night, then walks off with his wife.
Posted by Steve at 7:09 PM

Some people are funny aren't they! Last year I had a woman who swore blind Arwen was a drascombe. I patiently explained I had built her from plans and she was indeed a welsford navigator. She listened attentively and when I finished, she admonished me, pointing out she'd been sailing all her life and that she knew lots about dinghies and what I had was a drascombe and I should read my plans more carefully. She'd recognise a drascombe anywhere in any condition, apparently!
She ambled off, I turned around and found my lovely friendly marina team on the pontoon literally all doubled up, helpless with laughter. Now I have been privileged enough to have worked with some of their spouses and taught some of their kids. Apparently it was the look on my face and the fact that none of them had ever seen me rendered speechless before.....I'm still not sure what they are trying to tell me!
Hope you and family are all well and safe - have a lovely Christmas and new year Steve, as best as you can in the circumstances. Stay safe and well and thank you for all the inspiration and enlightenment again this year.