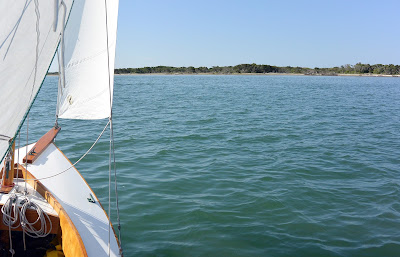 Up at 6:30, still feeling tired after being wakened late in the night by the mega-yacht crew.  I take down the boom tent and arrange Spartina for sailing.  An easy sail planned to Cape Lookout Bight, no reason to rush so I head down to the coffee shop at the Dock House restaurant for a danish and a nice glass of iced tea.

Away from the dock just after 8:00 with a balky outboard.  I get it running and we motor west and then south past Bird Shoal.  Both the tide and wind, what little there is, will be against us so instead of going outside on Onslow Bay we turn east inside of Shackleford Banks.  Just inside the barrier island a nice little east breeze springs up an we are under full sail. 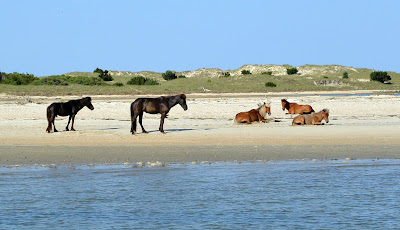 It is steady and relaxed tacking on a beautiful cloudless day between the sandy shores of Shackleford Banks to the south and shoal to the north.  Wild horses relax on the beach and a few boat campers are spaced out along the shore for the holiday weekend.  Blue green water and I wouldn't want to be anywhere else. 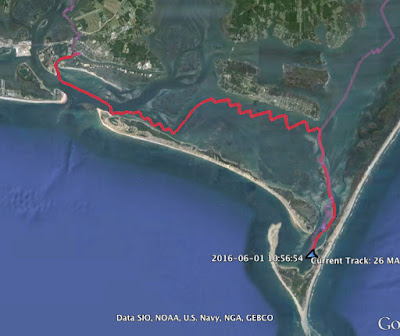 Just before 10:00 the wind picks up and we make a long tack north-northeast in the narrow channel that runs alongside the Middle Marshes.  Soon we are just off Harkers Island and resume the steady series of tacks making our way east.

Late morning finds us in a light wind at the spoil island just off the east end of Harkers Island.  Just before noon we turn south towards Bardens Inlet and Cape Lookout.  Easy sailing through the shoals with wind on the port beam.  There's a steady stream of power boats headed both north and south on the channel and I cling to the west side - on the ICW boats tend to slow down for a passing sailboat, on the channel to Cape Lookout they do not. 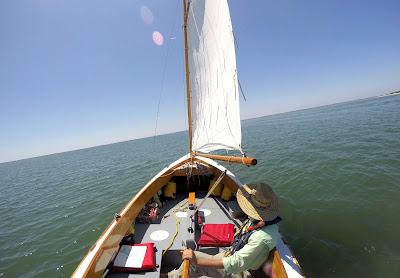 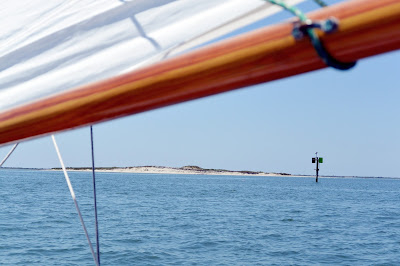 Just north of Morgan Island the channel jogs to the east and I need to tack to make it around the curve.  Not easy to do with the powerboats racing by.  In light wind I make two tacks with the tide working against us then hold off to starboard and wait for a break in traffic before making the final tack. 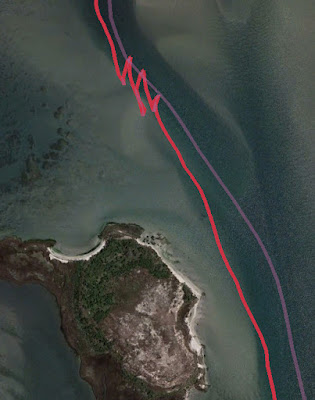 Wonderful sailing now.  Clear water with shoals and channels easily seen, small islets with white sandy beaches, ibises, terns and pelicans.  I watch the local boat traffic for shortcuts between the markers.  Just after 1:30 we sail in a channel that runs right along the marsh then slip out into Cape Lookout Bight.  Anchor down on the east side of the bight at 2:00. 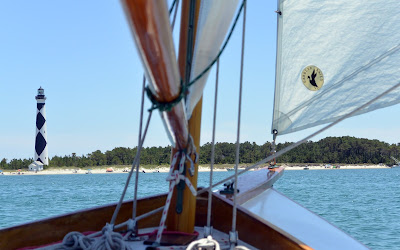 I clean up Spartina, get the batteries to charging with the solar panel, then slip over the side for a swim in the clear, warm water.  Back on the boat I lay back in the shade of the aft cockpit, tilt the straw hat over my eyes and fall into a deep sleep. 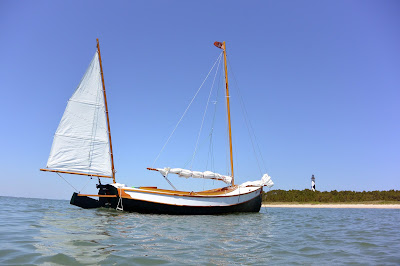 Dinner is spaghetti in marina sauce and it is barely edible.  If it was my brand of freeze dried meal I would have called it "spaghetti in really bad tomato soup."  I eat some, then have some fruit and crackers.  A bad meal is not going to ruin my stay in the bight. 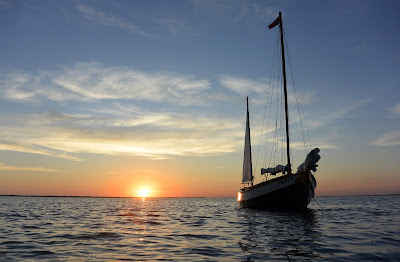 Late in the evening with the sun just down below the horizon I see a small fin cut the water behind Spartina's stern.  A small shark maybe, or possibly a large drum "tailing."  I don't know which but it is beautiful.  The fin describes a gentle curve a few feet off the transom then slips back down into the water. 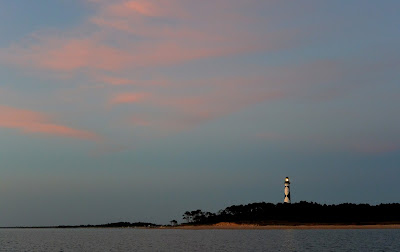