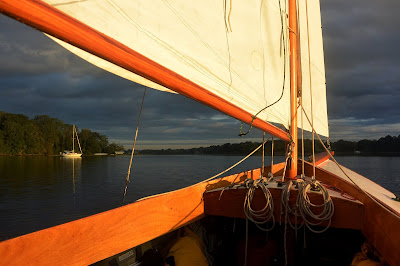 Cool, peaceful night.  Sail off anchor 7:25, sitting motionless is SPARTINA and making less than I kt in a ghost of a breeze.  Motor sailing by 8:00, lose a small striper on the trolling line.   Wind arrives just after 9:00. 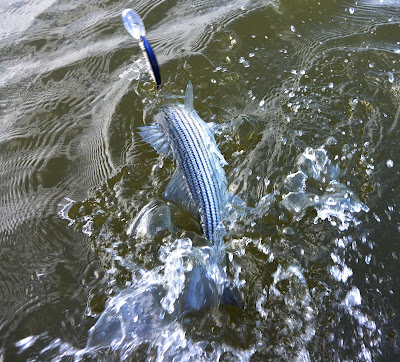 Tacking across the mouth of the Corsica catch and release a small striper.  Blue skies and close-hauled up the Chester River at 10:30 just off the marsh at Spaniard Point.  Making 5 kts near Deep Point, just wonderful sailing, an old white house tucked back in the trees, a dog barking at the point. 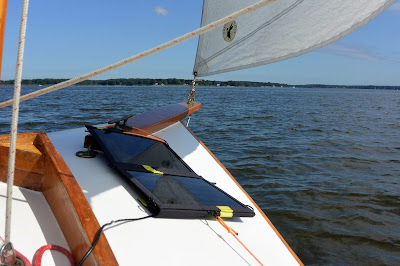 I set the solar panel on the foredeck to charge batteries and phone. 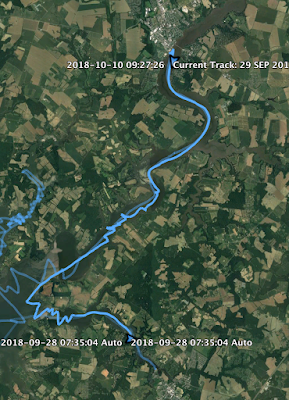 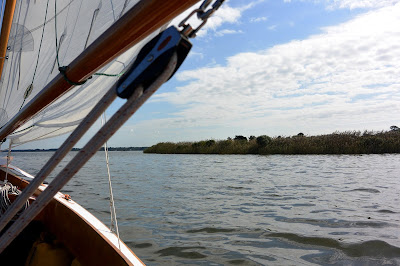 It's a peaceful, winding river with little traffic.  Farms port and starboard.  A group of kayaks paddle along the western shore.  Sailing up near the eastern shore I listen to the birds in the marsh.  At noon playing the shifting breeze and working against the ebb tide, making 1.5 to 2.5.  Motorsailing at Shell Point.  The wind comes and goes, I sail when I can and motor when I can't. 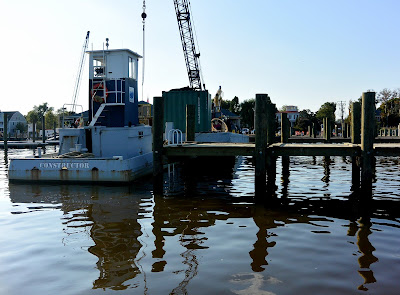 Sails down at Northwest Point, motoring past Newmans Wharf.  There's a crowd on the beach at Ralph's Wharf and I think about tying up for a burger at the beach grill made around the old deadrise there, but it is too early.  Across the river small skiffs run up and down lines of crab pots hoping to bring home enough crabs for dinner.  I continue on to Chestertown to find the waterfront to be a construction zone.  A couple tugboats and barges with cranes, and warning signs to stay off the not-yet-finished docks.  I tie up to the pilings at a nearby park and walk to the Fish Whistle for a late lunch/early dinner, then take a walk through the old brick downtown. 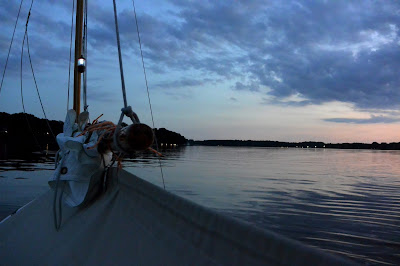 We push off from the pilings and anchor out in the river near two large cruising boats.  I can smell the steaks grilling on the nearest.   A couple kayaks by to say hello, asking if I needed anything.  I tell them thanks, but no, I'm fine.  Boom tent up, I slip into the bivy listening to the dj's music for a wedding reception on the waterfront.