day six - should have stayed 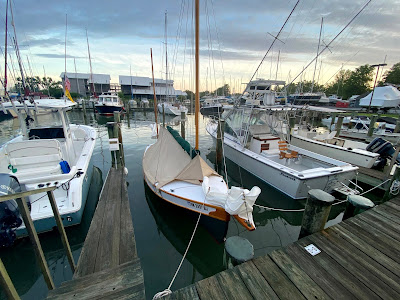 Calm clear morning at Knapps Narrows.  A light west breeze forecast to continue through the day.  Cast off 7:35, out of the entrance channel on the Bay side at 7:45 and ten minutes later all sails up. 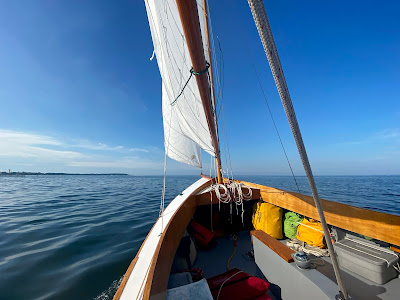 I'm surprised by the wind, better than expected, and crab pot markers are showing an ebb tide which helps up head down the Bay.  Weather radio reports a Canadian high coming overnight bringing cool air and a N wind.  Off Black Walnut Point 8:45. 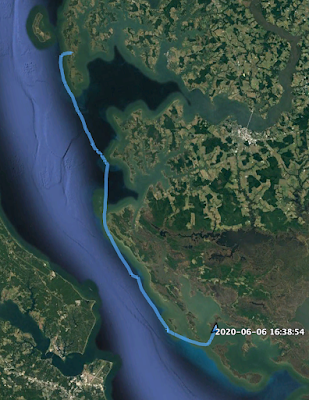 Easy sailing at 3.0 and I break out breakfast, an Rx bar, Tanka buffalo bar, cup of fruit and a ginger treat

At least a dozen deadrises working the clam beds at the mouth of the Choptank River. 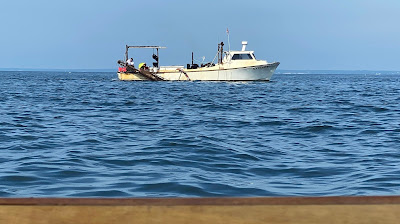 By 9:30, wind dropping and getting hot.  Sails down, under power at 10:05.  And I start wondering why I had left Tilghman Island.  Coulda, shoulda stayed there for another night.  A day sipping iced tea in the shade at the Marker Five, sleep on board SPARTINA at the marina or maybe even pony up for a hotel (I am, after all, a man of means).  But the morning breeze had caught my fancy so now I'm baking in the heat and motoring south. 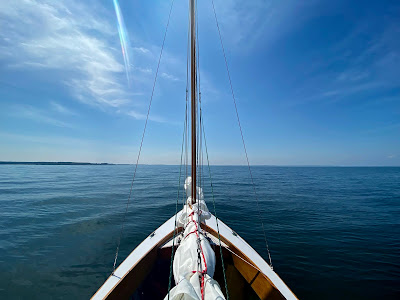 I cast at a school of menhaden hoping for a striper lurking below.  No luck.  Passing Hills Point at 10:40, crossing the mouth of the Little Choptank by 11:00.  Passing the eroded James Island as I watch a cormorant staying between SPARTINA and her six little chicks.  I don't think I have ever seen cormorant chicks before.

At noon shut off the outboard and raise sails, hoping for at least a hint of wind.  No luck.  Getting hotter.  Should have stayed at Tilghman.

Back under power at 12:20, the tide has turned costing us a half knot of speed.  Out on the Bay I can see a deadrise and a large cruising catamaran heading north on the bay.  There is a thin dark line on the water to the south and west.  Wind??  Sailing up and making 1.2 for a while, then nothing.  Back under power with the sails still up but just for shade. 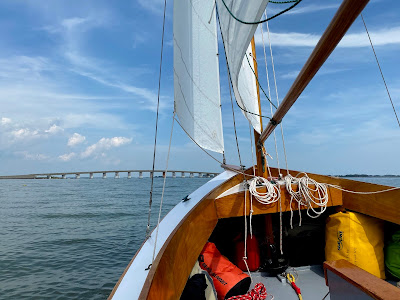 At the north end of Fishing Creek channel, what I always call the Bamboo channel because it was lined by bamboo sticks about a decade ago when I first used it, at 2:20.  The channel has become progressively shallower and narrower over the years.  Looking east I see the channel markers are gone, all replaced by "danger" signs.

A southwest breeze comes at 2:55 just off the south end of Barren Island, 1.3 against the wind and tide.  Motor sailing, hot, frustrated. 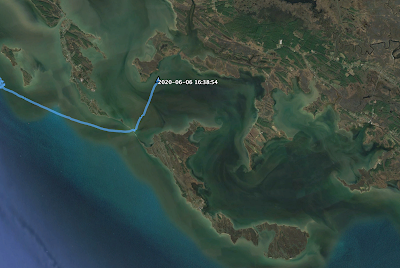 Under the bridge at on the Honga River at 4:00, anchor down at 4:30 just south of Wroten Island. 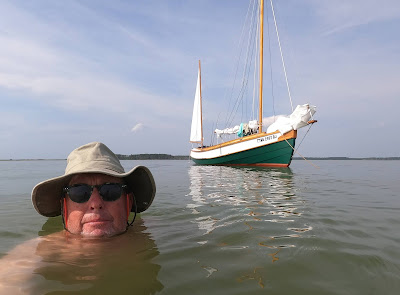 I hop in the water to cool off, then clean the hull of SPARTINA.  Feeling much better I climb back on board and fix a self-heating O-Meal of hash browns for dinner, perfect after a long day. 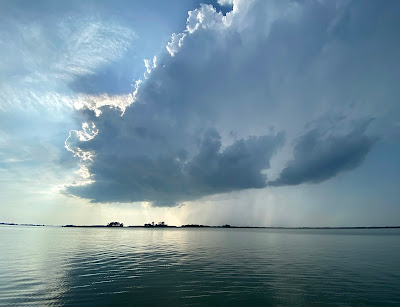 I see a thunderstorm coming off the Bay and set up the boom tent.  The storm arrives, rain and a little thunder, moves on quickly, leaving a rainbow as an evening gift. 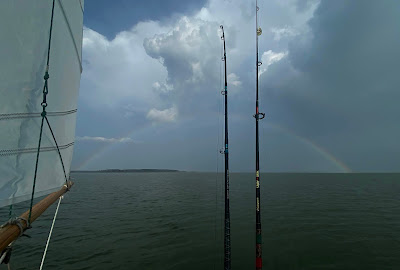