It's a gusty night but it is the helicopter that wakes me.  I don't know what time it is.  The helicopter seems to be flying very low and very close by.  I listen as the copter goes from the starboard side, to the bow, back down the port side, it seems like it is circling the boat.  I crawl out of the sleeping bag and look out the back of the boom tent and there the dark shape hovers.  Too small to be a military helicopter, maybe the marine police.  As I crawl back into the sleeping bag the aircraft's spot light comes on and the boom tent glows.  The helicopter circles again, this time with the light.  The light goes off, the helicopter hovers for a moment, then heads south. 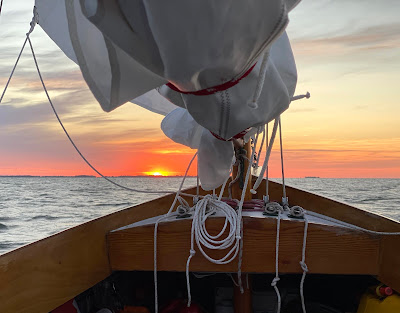 We sail off anchor at 5:40, mizzen and jib in a strong southwest wind.  Rudder and cb raised to slide over the shallows, I round up outside the creek to put the rudder blade down, just partially lowering the cb.  Heading north as the sun comes up, the gps shows 5.1 kts. 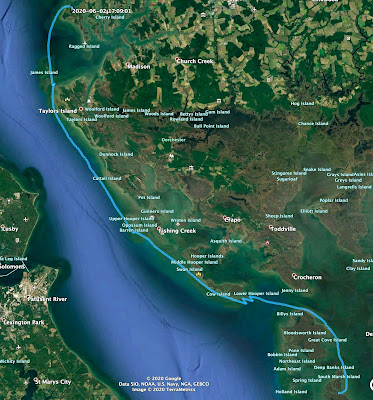 Passing the north end of South Marsh Island we enter the choppy waters of the Holland Straits, speed drops to 3.2 in the rough water.  I see a deadrise working the crab posts at the south end of Bloodsworth Island, a second deadrise ahead as we roll in the waves coming out of the straits.  I glance over my should and I am shocked to see a large military/police style boat coming up on my stern.  Where did they come from?  The boat is directly behind me, maybe 40 feet away and I can see two guys staring intently at SPARTINA.  I know Bloodsworth Island is a restricted military island, but I'm not on the island.  In fact I'm weaving my way through crabs pots so if crabbers can work this water why can't I sail on it?  The boat moves to starboard, speeds up and comes alongside.  A Maryland Natural Resources Officer comes out on deck.  He gives me a thumbs up but his face is uncertain.  "A you ok?" he shouts across the wind.  Maybe from his point of view I did not look ok.  Just two little sails up, bouncing up and down in the rough water, possibly not his expectation of what a sailboat should look like.  "I'm fine!"  His next question is lost to the wind but I can tell he wants to know where I came from.  "I put in at Crisfield."  He nods his head.  "Have you seen a 14' jon boat?"   As I tell him I have not seen one I understand immediately the deal with the helicopter circling in the night.  The police boat heads off to continue their search. 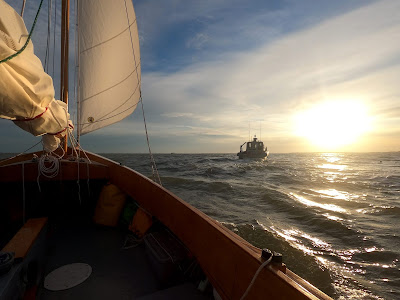 Lighter wind at 6:50 in the lee of Bloodworth Island, I round up to set the main with a single reef.  Making 5.2 with the added sail. 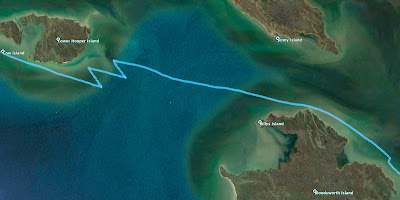 Rounding a point at the north end of Bloodsworth Island at 7:25 we enter the Hooper Straits.  It's blowing pretty good across the straits with a full flood tide.  Speed drops to 4.0 in lumpy, confused water.  There are no waves to speak of but the water peaks up in mounds then seems to drop out for under itself.  I focus on the southern tip of Lower Hooper Island, sailing close hauled keeps us in almost a direct line towards towards what is marked on the chart at Nancy's Point. 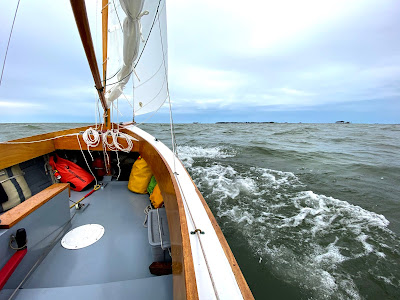 Across the main part of the straits by 8:15, calmer water there.  Coming up close to the shoreline I see we cannot round the island so I do a 10 minute tack back, 10 minutes back in, one more tack out then back again, slipping out on to Chesapeake Bay at 9:00.  That incoming tide that we worked against in the straits is now in our favor and is not helping carry us up the Bay at 3.9 kts.  Barren Island in sight to the north at 9:35, sailing off the white houses of Hoopersville at 9:45.  A light rain so I slip on foul weather gear.  Just south of Barren Island I shake out the reef, 4.2 kts.  Headed towards the entrance to the Little Choptank at 11:15, overcast, wind just forward of the beam, making 5.5. 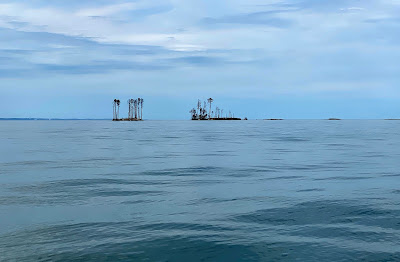 The wind disappears off of Oyster Cove, under power across the mouth of the Little Choptank.  I am saddened to see disappearing James Island, a few years ago covered with a healthy stand of trees but now broken little islets with just a few emaciated pines.  Certainly it has been eroding for decades but the recent change is shocking.

A glassy calm river at 3:00.  Some wind arrives at 4:00, making 2.0.  An eagle above hovers, spreads its huge talons and dives for the water, bursting up with a tightly gripped fish.  Anchor down Brannock Bay at 4:50.

A man in a skiff with a concerned look on his face motors out and asks "Are you ok?"  Yeah, like I haven't hear that one before.  I tell him I am just fine, thank you very much. 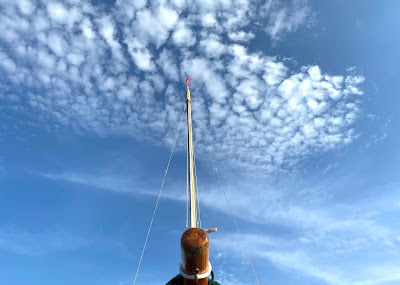 39.8 NM
Biscuits and gravy with sausage crumbles.  Excellent.
Posted by Steve at 1:23 PM

Wonderful sunrise photos! I was watching your SPOT track carefully that day (I was up and awake way early). Was wondering which side of Hooper Island you'd sail - Bayside or Honga River. As much as you like marshes and twisty channels, I was half expecting you to sneak up the back creeks and bays into the Little Choptank. Anyway, looks like quite a beautiful day.

I had planned on visiting the Little Choptank either on the way up or the way back, but timing just didn't work out right. Will save it for another trip.