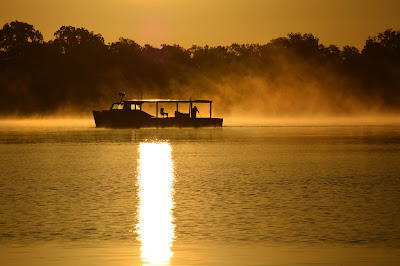 The wake from a deadrise passing nearby brings me out of a deep sleep.  Cool, calm night.  Heavy dew on the boom tent.  As I break down the tent I see the deadrise is working three trotlines that surround Spartina.  I leave the tent hanging from the boom as I put the long lens on the camera to photograph the waterman working in the light mist hanging over Shaw Bay. 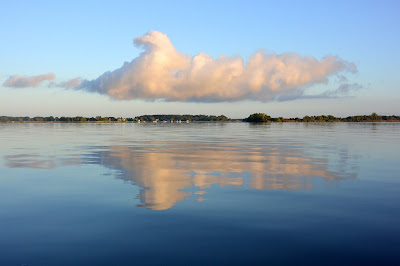 Sail off anchor just before 8:00, I'm getting lazy these days and sleeping in.  We drift for a while then motor at idle speed, catching a light wind on the Wye River.  Blue skies and a few white clouds.  It is a fine day for a day sail.  I could easily be in St. Michaels for lunch but instead I want one more day on the water.  Wind comes and goes, monarch butterflies flutter along with the sails.  More wind and steady sailing at 3.6 knots approaching Parsons Island, I reel in a small striper. 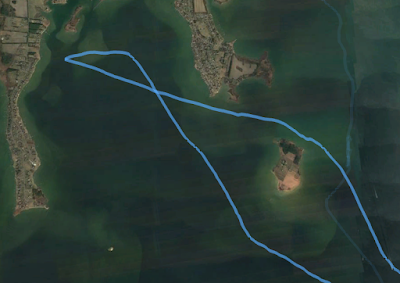 We sail on towards Crab Alley with a nice south wind.  I see a yellow shape just underneath he surface of the water.  I expect it to be a ray until the largest sea turtle raises its head then dives quickly.  I did not know they had sea turtles this far up the Bay.  We come about off the marina at Crab Alley, passing back behind Parsons Island where we drift in the wind shadow of the trees.  It is becoming hot. 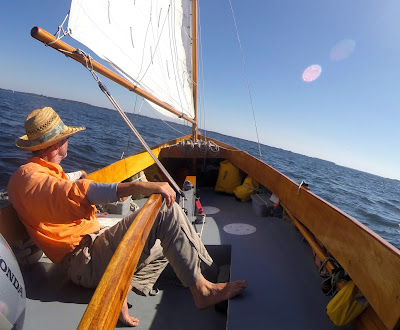 Wind picks up in the afternoon, probably the finest wind of the entire trip.  We tack up the Miles River at 4.1 knots.   An eagle makes two low passes over the river.  On the third pass it reaches down with huge yellow talons and grabs a fish, a fish big enough the the eagle struggles as it flies towards shore. 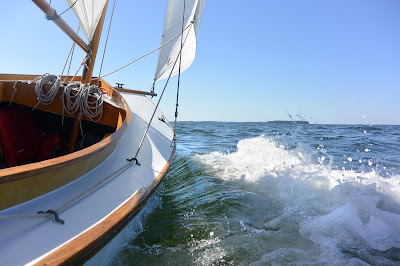 I hook a striper on the trolling line, maybe the largest of the trip, putting up a fight and making me think is is 30 inches or more in length.  I work the fish in towards the stern of Spartina.  The fish heads to the starboard side where I have to pass the rod around the mizzen.  Doing so I leave some slack in the line and the fish slips away.  Good fight, but I would not have kept a fish that large, it would have been a waste. 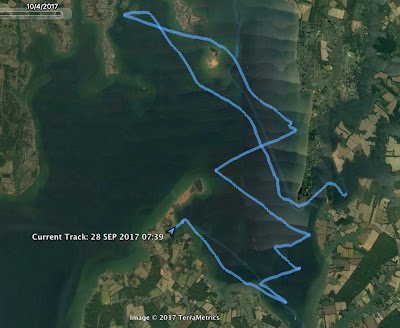 Nearing Deep Water Point I know that St. Michaels would be in sight just around the corner.  I turn downwind towards Tilghman Point, following the channel into pretty Tilghman Creek.

Anchor down I straighten up Spartina and get ready to fix dinner.  I hear the rumbling of a diesel engine, look up to see a sailboat with men wearing various versions of tuxedoes.  I tell them they did not need to dress up on my account.  "We always dress up for a fine lady," one man responds as he gestures towards Spartina.  They also confess the tuxes are for the last evening race of the season in St. Michaels.  I wish them a good race and say goodbye.

Dinner, then a peaceful evening on the creek with countless flights of geese passing overhead.

Thanks, Steve. I always enjoy the stories of your cruises. The first two photos are especially nice!

Thanks, Chris. It was a great trip. Nice to relive it as I put the log together! Steve