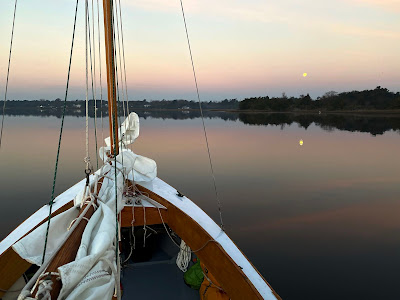 A peaceful night on Rantowles Creek.  The tide rushing by like a river, the occasional train rumbling across the bridge half a mile up the creek.
I wake much too early, 5 a.m. only to realize the sun won't begin to rise ufor over an hour.  I am anxious to get on the way, but nervous too, wondering about the tides and currents.  I tuck away the sleeping gear, sit in cockpit, relax and nod off for a short nap.
Under power in the creek at 6:35, out of the creek and on the Stono River a few minutes later, 4 kts and feeling some help from the flood tide.  Wearing my foul weather bibs and a wool sweater against the morning chill.  Sun up over the trees at 6:50, it feels good. 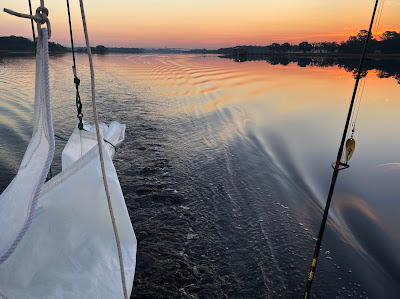 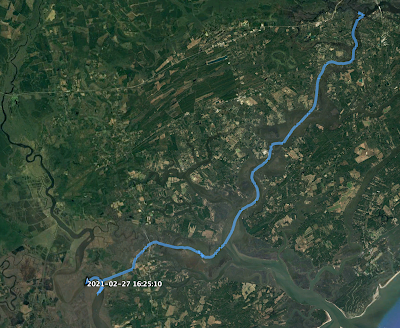 By 9:00 the tide seems to be in my direction and gps shots 5 kts.  I raise the mizzen hoping for wind.  Approaching the Dawho River I see a distinct line in the water, the tide line marking two different currents.  Not enough wind to sail and I've been motoring more than I like.  Anchor down off Slann Island.  I check my gas can and I've burned more fuel that usual, motoring against currents impacts the mileage more than expected.  I eat lunch, take a nap, scan the apps for the next fuel dock and there doesn't seem to be one nearby. 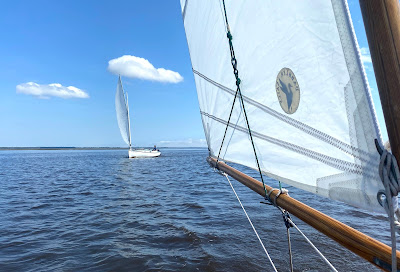 Something of a breeze begins to fill in just after 1:00.  I look back towards the sound and see a Marshall Sanderling catboat headed my way.  It has got to be Doug from the ramp on Wappoo Creek yesterday.  He greets me with a wave just after I raise sail.  He lowers the peak on his catboat HORSERADISH to slow down and sail alongside SPARTINA.  We're both heading up the creek and trading tacks, enjoying the day.  I ask how far he is headed.  He says the boat ramp just under the bridge ahead.  With that in mind I ask him if he has any gas to spare.  He reaches down below his seat and, as if he had it ready for me, and sets a gallon can of gas on his side deck.  Once again he spills his wind, allowing me to sail up close and grab the can.  I am confused, I thought I might stop at the marina, get the gas from his there.  What should I do, pour the gas from his can to mine?  Hard to do while sailing.  I ask Doug and he shrugs his shoulders.  "Whatever" he says.  I sail back alongside and hold out a $20 bill for the can and the gas.  He shakes his head no. "Next time somebody needs gas, you help him out."  It's very kind of him.  Soon Doug is dropping his sail, heading in to the boat ramp.  We wave goodbye. 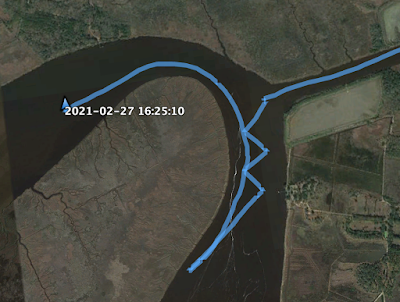 After slipping under the bridge over the Dawho River on to North Creek, a puff of wind pushes SPARTINA on her way.  It is getting to be low tide and the creek is very, very narrow with mud flats on either side.  Up ahead I see a big power boat, maybe a $50,000 kind of boat , just a little bit off the center of the channel and they are sitting on the bottom wondering when the tide will come in again.
Mid-afternoon the channel turns to the west southwest on Watts Cut, very gusty wind on the nose.  Motorsailing and working hard to stay in the center of the narrow cut.  Finally we leave the cut and sail out on to the Edisto River.  I take a deep breath and relax on the open water.  It's a slow series of tacks down the river but I soon realize it could be dark before reaching the next anchorage - both the light wind and the running tide are working against me.  I come about to head back up the Edisto past the cut and around the curve where I drop anchor in about10 feet of water between Jehossee Island to the north and Sampson Island to the south.
Fettucini with mushrooms and beef for dinner with a side of mixed tropical fruit.
These tides and currents are interesting. 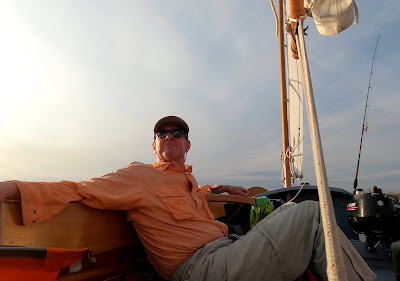