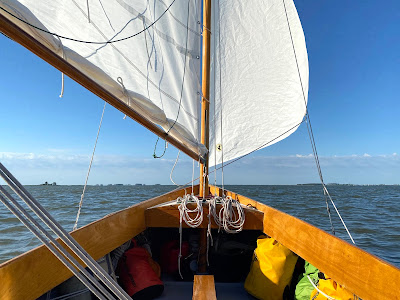 I sleep in a little later than usual after a rough night.  There had been the one evening storm, which was a small one, and then a series of larger storms in the middle of the night.  I had anchored for wind out of the north but instead the wind came strongly from the south and it must have been wind against tide as SPARTINA bounced around on the chop for a long while.

The Canadian cool front has arrived, clear, cool and dry air in the morning with solid wind out of the North.  Sail off anchor at 7:00.  Making 4.6 down the Honga River with mizzen, jib and single-reefed main. 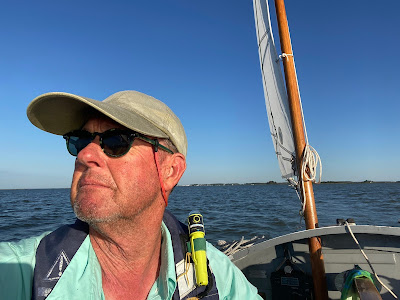 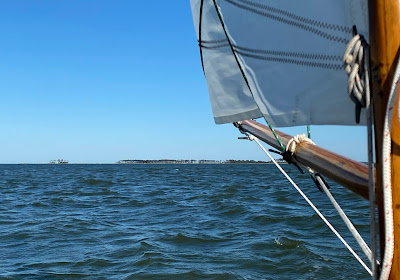 Making 3.7 at 9:30, Bloodsworth Island just a thin dark line to the east.  Adams Island to the southeast.  Next is Holland Island and then South Marsh Island, where I anchored the first night out, at 11:00, 4.2. 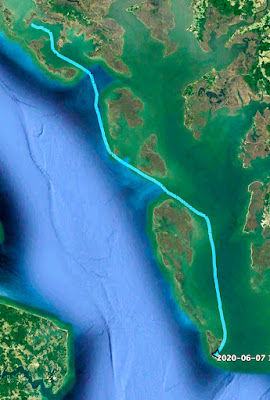 Solomon's Lump Lighthouse straight ahead as we enter Kedges Straits at 11:25, 4.8. 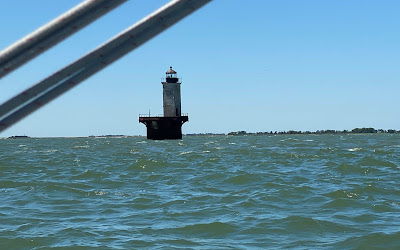 Pass the old unbalanced-looking lighthouse in very rough water at 11:40, the light never quite looking right after they removed the light keeper's house.  Out of the straits and on Tangier Sound at 12:20, doing 3.5 to 4.5 in a rolling swell.  Jibe towards Tangier Island, the water tower on Tangier showing as a tiny blue dot on the horizon at 12:50.

The wind builds and we are overpowered.  Thinking of tucking in a reef or two but easier just to drop the main and sail under mizzen and jib, making 4 kts and better under the two small sails. 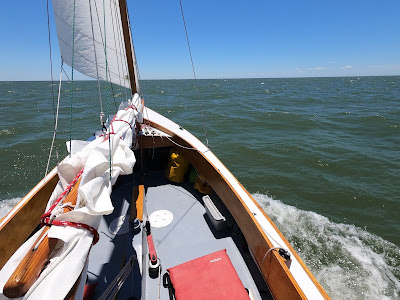 Wind drops a little and the main goes back up at 2:45, doing 4.6 to 6.  East of Port Isobel, the little island just across the flats from Tangier, gps shows 7 knots riding a gust down a wave.  Sail into Cod Harbor with a skiff running alongside.  "I like your boat" says the waterman.  Anchor down Cod Harbor at 3:45. 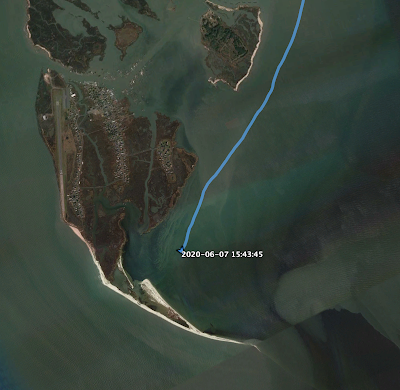 Boiling water for a freeze dried dinner I see a skiff come down the channel from the village.  It's Ooker Eskridge, Tangier's mayor.  "Are you ok?" he calls out across the water (as if I had not heard that one before).   I tell him I am fine and introduce myself, reminding him I spent an afternoon with him at his crab shanty a couple years back.  I tell him about my trip, ask him about the island. He says Tangier is doing fine, crab prices are "sky high" and that is good enough for him.

Another skiff comes by later, an older waterman.  He circles SPARTINA, points at the hull, smiles and with a nod heads on his way. 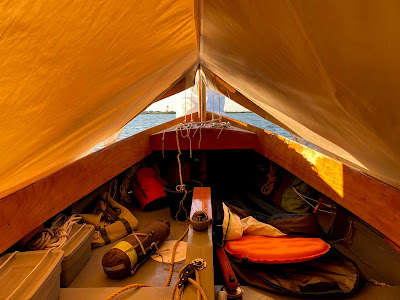