day six - surfing down the waves 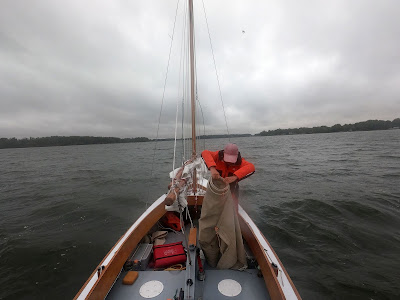 Sailed off anchor at 8:20 after a rougher night than expected.  Rain, wind and chop arrived in the early morning hours.  The stiff wind was out of the east and SPARTINA was exposed to the waves running down the long fetch of the Sassafras River.  That same east wind should help us with the run down the bay.  Overcast and gusty, we make 2.1 with wind on the stern to the cut off of Pond's Bar. 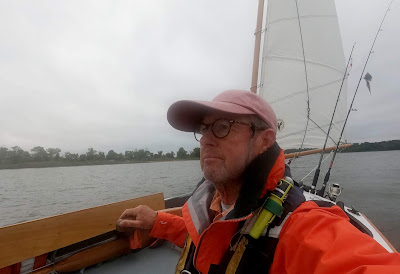 Marker 5 we catch the wind and make 6 kts, then 3.3 down the narrow channel.  Shake out the reef at 9:00, slow going with wind on the stern, sailing wing and wing.  The GPS seems to be working but I keep the backup turned on just in case.  Just as I feel good about the GPS it loses contact with the satellites.  Try to jibe to Grove Point just before 10:00 but struggle to find a good angle.  Hazelnut Rx bar, steak (beef stick, a new item) and mixed tropical fruit for breakfast. 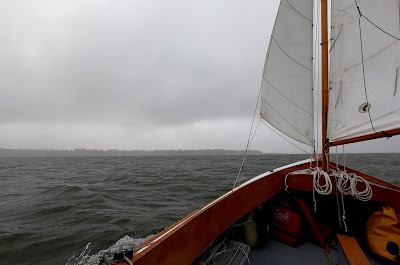 Still can't find a good angle to Grove Point so we follow the north shore of the river.  At the river entrance, slipping out on to Chesapeake Bay, we jibe again and turn southwest to Grove Point, waves rolling down the bay lifting SPARTINA'S stern and sliding under us.  A light rain falls.  Tuna and crackers for lunch. 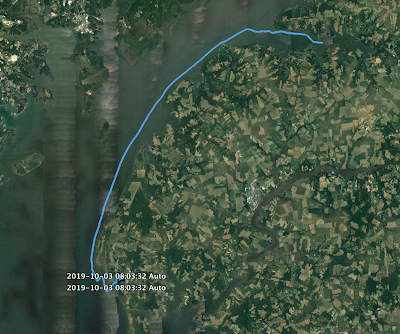 Off Worton Point just after noon, the mist gone and the overcast a little light, making 3.9.  Pass Fairlee Creek 1:05, 4.6 kts.  GPS shows 6.8 during the gusts off of Tolchester Beach where the shipping channel comes in almost to the beach itself.  We stay further offshore for the good wind and cross the channel twice with no traffic in sight.   Making a steady 5.8 at 1:50, the waves pushing us along nicely. 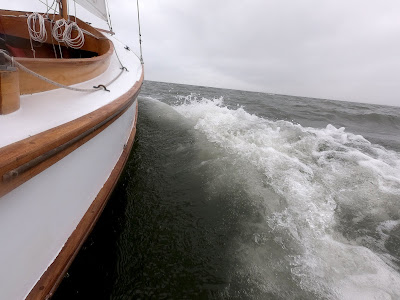 The Bay Bridge coming off Kent Island is in sight just after 2:00, Swan Point juts out to the south at 2:45.  Lighter wind, making 3.5 but it doesn't feel like we are moving at all.  We round Swan Point and as always I mistake Swan Creek for Rock Hall.  Four good tacks into the wind and we round up to drop sail just outside Rock Hall's breakwater. 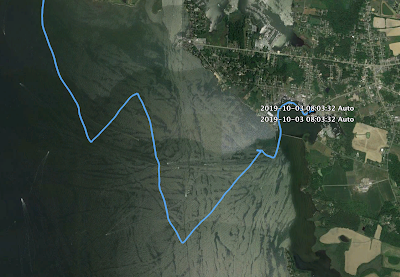 Docked 4 p.m. Rock Hall Landing Marina, exact same slip I used last year, at 4 p.m., checked into the nearby Mariner's Motel a few minutes later, a couple guys down from Pennsylvania steaming up crabs in the parking lot.  They tell me they are down for about four days, running trot lines from a small skiff during prime crabbing season, steaming up each day's catch every evening.  "Gonna have a big crab party when you get home?" I ask them.  The one guy tells me he'll be too tired to party.

Dinner with friends Fred and MaryLou on the waterfront, a visit to Rock Hall wouldn't be the same without seeing them.  Do the laundry, clean up the boat, charge the batteries, fill out the log.  A good night's sleep before tomorrow's forecast high winds. 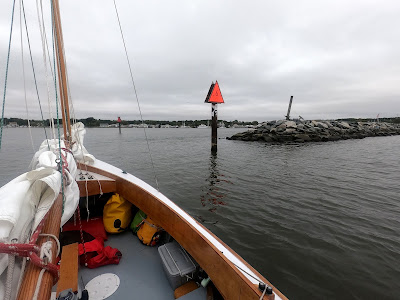