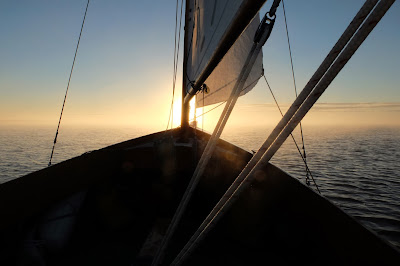 Gold, erupting from the sun rising through a light morning fog.  We sail off anchor with a faint breeze out of the west, puffs of white mist drifting across the cockpit.  The wind fails and we motor sail at idle speed. 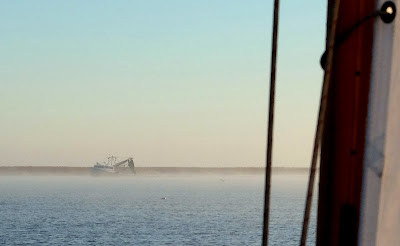 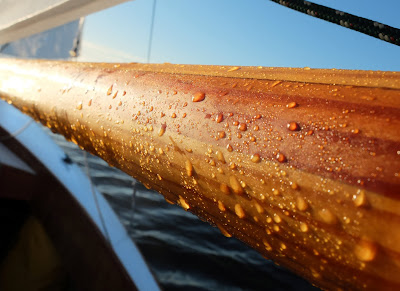 The amber wood of the boom, streaked with of red and highlighted by drops of dew.  A large shrimper slowly drags her nets on Stumpy Point Bay.  The wind dwindles, 2.8 knots across the mouth of the bay.  Looking west the sun catches the red and green markers leading to the emergency ferry docks, the docks where I have landed after more than a few storms on Hatteras Island.  I turn off navigation for Manteo by way of Roanoke Sound, settling instead for a path north on Croatan Sound.  The wind picks up, making just shy of four knots.  Why waste a good breeze? 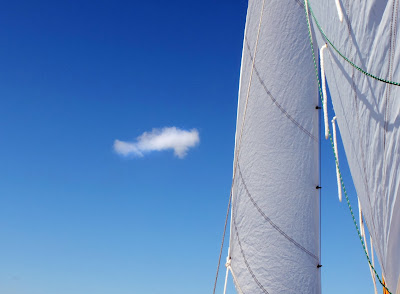 A puffy white cloud strays across the blue sky.  Roanoke Island on the horizon at 8:50, wind swings to the north.  Bodie Island Light, the third lighthouse of the trip, in sight to the NE before 10:00, then the Bonner Bridge at the north end of Hatteras Island a short while later.  A Coast Guard C-130 out of Elizabeth City makes a low arc in the sky.  On the long, slow tacks to the Roanoke Marshes I pick up on oldies station on the radio, then sports talk out of New York.  A few casts into the marshes in search of trout, drifting off a pretty beach on a narrow point that reaches west into the sound. 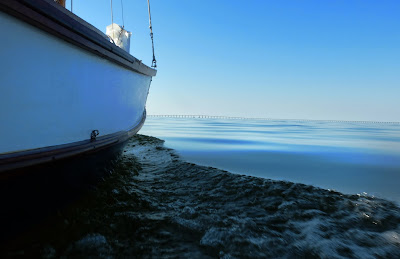 Midnight blue, almost black, in the shade of the hull, the only shade in sight.  No wind and the heat pushes down from above.  Main and jib lowered, we motor north on Croatan Sound.  The weather station takes away any hope for more wind.  No clouds and nowhere to hide. 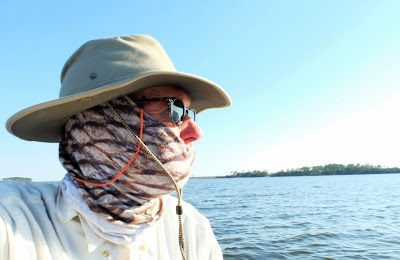 The white heat of a stifling afternoon.  I roll down my sleeves, roll up my collar, cover myself as best I can.  The skin on my hands, face and feet turns red.  The afternoon is brutal, not a breath of air and the sun is searing.  I look at the chart and pick out Peter Mashoes Creek, near the top of Croatan Sound where it opens into Albemarle Sound.   Gill netters and crabbers work out in the sounds as we turn NW to the creek.  Anchor down, I lie down in the cockpit to hide from the sun. 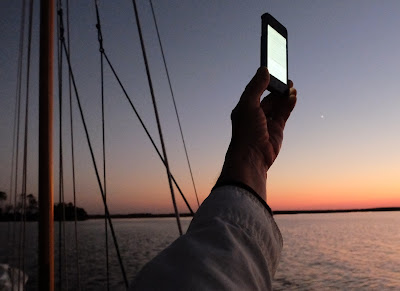 Orange, fading to black, as the day cools.  Cell phone raised for better reception, I send a note to Millie that I should be back in Elizabeth City tomorrow.

Wonderful pilgrimage Steve! I've been following recently with much interest ever since Barry's videos in Norfolk last Fall. I'm past the half way point in an Oughtred Sooty Tern build. I plan to make similar voyages this new year. I've been comparing the details of Spartina and how they may apply in my endeavor. Glad to see your enjoying the journey. Great pics and narrative.
Cheers-
Eddie

Thanks, Eddie. Send me a photo of your build sometime. When do you hope to launch?

Hi Steve
I have really enjoyed reading your notes on this past trip. Great narrative and great pictures. Almost like taking the sail with you. We still have the navigator you saw in mission bay a couple of years ago. The invertation for the sail is still open the next time you are in town.

Kevin,
good to hear from you. It's been a while. Thanks for the invitation, I'll keep it in mind. I've been out there a few times since we met but the schedule has been hectic. Maybe next time. How's the sailing weather in February?