day five - across the bay to the Susquehanna

A light overcast all night long.  Calm and peaceful. 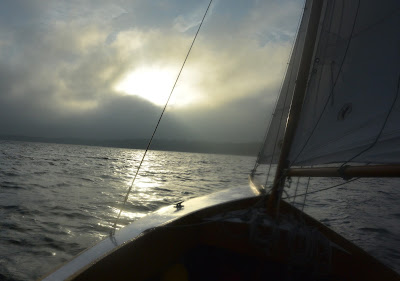 Sailed off anchor 6:30 with low grey clouds to the east sliding towards the bay.  Making 2.6 across the very stillest Still Pond, following the markers to the narrow exit, confused winds at the jetty but we slip through to open water with a few pumps of the tiller.  A chilly morning, we make 3.8 outside of Still Pond but then fall into the wind shadow of the cliffs with tall trees just to the north. 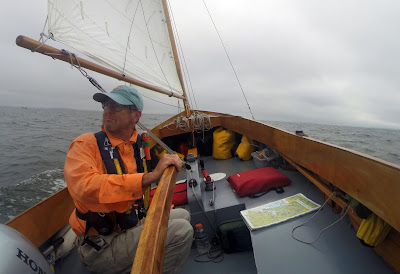 ENE wind out on the bay, hints of the sun breaking through at 7:45.  An hour later the tide turns in our favor, 4.6 knots.  Sailing off the mouth of the Sassafras River I can feel the swell rolling down the river out onto the bay.  We tack right up to the cliffs, the deadrise "At Last" picking up a string of pots nearby.  I can now pick out Spesutie Island to the west, Turkey Point at the mouth of the Elk River to the north, and the Sassafras River to the east. 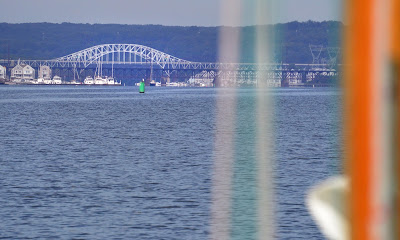 Lighter wind midmorning, the water very choppy near Spesutie Island, Spartina struggles to make headway.  The bay is busy with traffic, a tug and a barge heading down the bay, three more tugs and barges heading up the bay.  I can pick out the railroad trestles in Havre de Grace before noon, the wind against the tide and water gets rougher.  Motorsailing on the last tack across the bay, crossing the shipping channel on our way towards the Susquehanna Flats.  In the lee of Turkey Point the water calms. 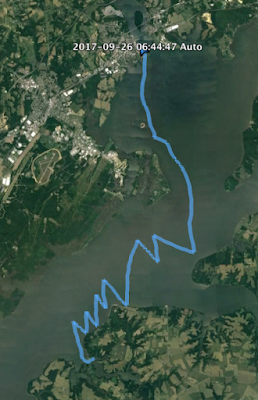 No wind and it is hot, sails down and motoring past a couple small islands along the channel to Havre de Grace, huge clouds of flies following Spartina.  The flats are covered with eel grass and I stopped to clear the prop a couple of times. 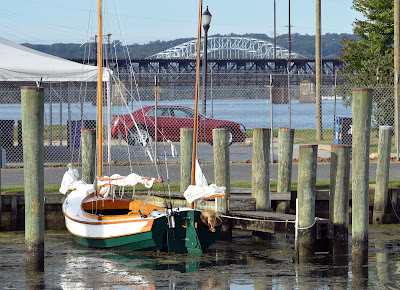 I tie up at Tidewater Marina, paying for a mooring but they let me use a grass-filled slip so I can explore the nice little town.  Instead of a french pronunciation, the locals call the place "have REE de GRACE."  After a late afternoon dinner where I charge my phone, I motor out to the mooring - never having stayed at a mooring before - before evening comes. 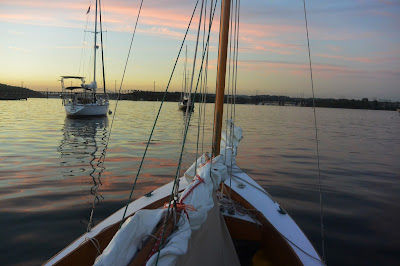 A large catamaran ties up at a mooring next to Spartina, then a second one.  High speed Amtrak trains cross the trestles every 20 or 30 minutes.  In the darkness I read under the boom tent.  A couple of moorings away I hear a man and a woman talking.  They are playing my kind of music, old 70's music - the good stuff - a little country and some delta blues.  I hear the friendly, relaxed tone of the conversation, but not words themselves.  The woman laughs.  Another train rolls across the bridge.