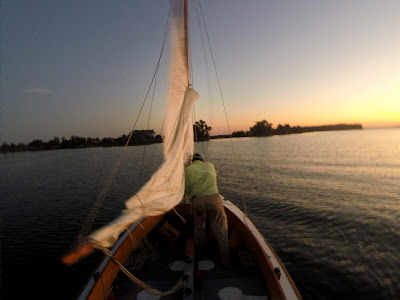 Sails up at 6:30, clear skies and a light north wind.  Making 2.8 out on the Miles River as the sun comes up.  A starboard tack towards Parsons Island as a flock of terns dips close to the water. 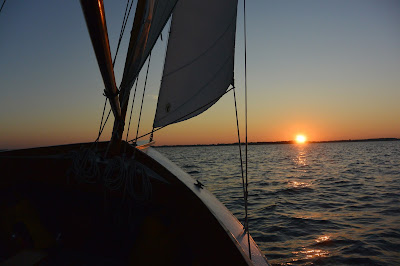 I turn on the radio for an early morning football game between Baltimore and Jacksonville.  The wind is not strong but it is steady and I enjoy the comfortable morning.  Prospect Bay by 10:00 tacking to Kent Narrows.  At Hand Point under power to the Narrows hoping to make the 11:30 bridge lift. 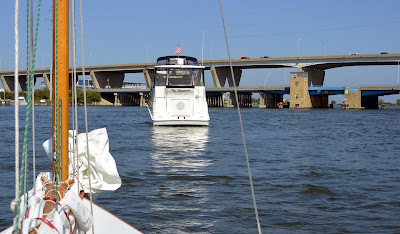 We reach the bridge and find ourselves third in line for the lift.  With a strong ebb tide I keep the outboard a little above idle to hold steady in the rushing water.  Four or five boats, big power boats, line up behind Spartina.  The bridge begins to lift and I power up behind the big boat in front of me.  I've got plenty of power to work against the current but as the boat ahead goes through the opening I see the the wide buttresses on either side of the opening are funneling the rushing tide.  A wild current rushes around the power boat.  I'm next in line so throttle up and move forward.  Realizing how strong the current is I begin to wonder if I can make it.  For a second I consider a hard turn to port and letting the other boats go by but instead head in to the opening.  Spartina comes to a standstill in the current and a large boat comes up from behind giving me no way go but into the current.  I open the throttle as wide as it will go.  Spartina holds for a few seconds, then begins to inch forward.  Halfway through the opening I realize we should be able to make it, I focus on keeping the hull pointed straight into the current.  We make more ground and past the buttresses the current slacks and I fall off to the side in calmer water.  The big boat aft of Spartina cranks up her power and runs on by.  Nerves a little bit jangled I motor over to Harris Crab House, tie up to take a break.  A nice lunch of fried flounder and we cast off before 1:00. 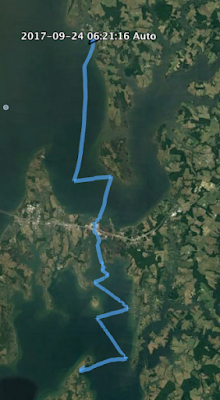 Full sail on the Chester River, tacking across the choppy water.  Get a whistle and a wave from a big offshore boat passing by.  Making 4.6 in the afternoon breeze.  The wind has swung to the northwest and I realize I got a line for a single tack to Rock Hall.  Off Eastern Neck making 3.6 on a port tack, really fine sailing.  A Giants vs. Eagles football game keeps me company on the radio.  Out of the Chester River the water is much calmer and the tide is working in our favor. 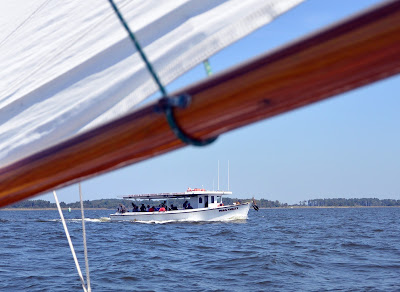 About 3:30 I pick out the green marker for the Rock Hall entrance channel.  I text friends Mary Lou and Fred, they'll meet me when I'm in.  It is nearly 5:00 as we pass the breakwater, I follow the channel markers to the east and then the north, tying up at the town wharf ahead of a Canadian boat that has just come in.  My friends arrive and we head to the Harbor Shack for a light dinner and glasses of iced tea. 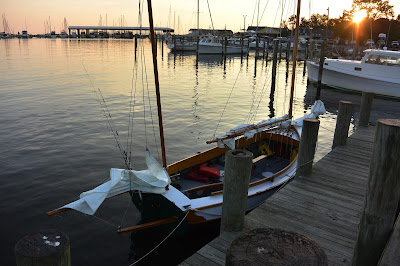 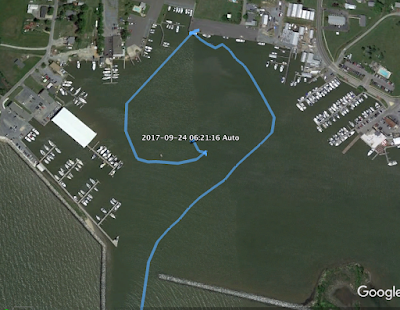 After dinner I clean up Spartina and cast off, taking my place in the harbor with the old Chesapeake Bay skiffs.  How nice. 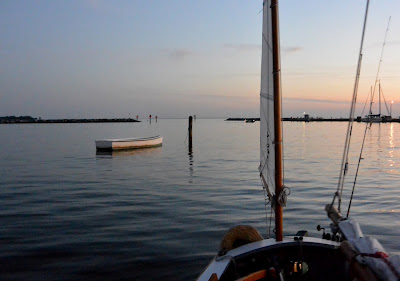 Hello Steve, buried in house works I'm fulling enjoying reading your last trip log. Motoring in "tense" conditions is never enjoyable. The yawl rig contributes to increased windage and I have too experienced a few hairy moments, in traffic in Venice. My homemade inboard propels the boat to 4 knots grand Max in calm conditions. My margin is thin. How fast can yours push spartina wide open throttle? Thanks and keep it up!

My Honda 2.3 can push Spartina to just over 5 knots, which I think is hull speed. I've been through those narrows six or eight times over the years, with the tide and against the tide, but never at a peak tide like this. I should have either waited and gone through last or gone back to a little creek, dropped anchor and taken a nap, returned an hour or two later I would have had much less current. Lesson learned.