Up a little after 6:00, no wind, cool and grey.  Over the past four nights I've slept on a 44' ketch, in a hotel room, on a porch and on Spartina.  The ketch and the hotel room were very comfortable, the porch not so much.  Sleeping on Spartina I felt as if I was sleeping at home. 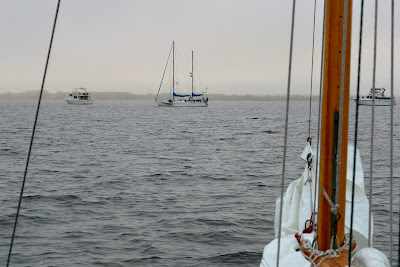 I stow the sleeping gear and boom tent, then reorganize Spartina for cruising.  At 7:40 I push off from the dock and motor out on to Fogg Cove, just a few people out including Barry who is down at the end of a pier with his video camera.  I do not raise sail, there is no wind and I am going only a short distance out onto the Miles River to Kantala.  Michael is working away in the galley as Sheila and I tie up Spartina.  Down in the cabin I am served up with a glass bowl - never expected to see a glass bowl on an ocean cruising boat - full of steamy rich porridge, a real treat.  Never have I started a cruising day with a better meal and company.  There is no rush to leave and we sit and talk in the cabin until Sheila says "Is that rain?"  We climb outside to find the splashing noise is not rain, but instead a feeding frenzy of stripers just a few yards from Kantala.  I hop down to Spartina and make a few casts with the spinning rod, bringing in just a tiny striper before the school moved away. 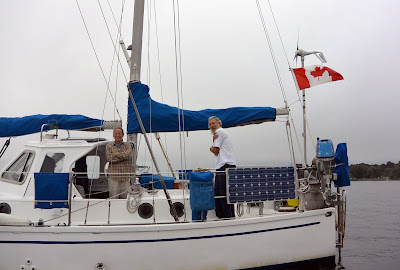 Before casting off from Kantala Michael makes a phone call to check on the weather.  There is a hurricane to the south, very possibly headed to Chesapeake Bay.  We've got a few days yet, and of course there is always the uncertainty of a storm's path.  But we each make our plans with the storm in mind, Michael and Sheila checking with friends in the area for a good hurricane hole to protect Kanatala, and myself planning on being within a day's sail of Cambridge should I need to get off the water.  I thank my new friends for their hospitality - from Cuban beer to Mikey's porridge and a comfortable place to sleep on a stormy night - and cast off, each of us wishing the other a safe trip. 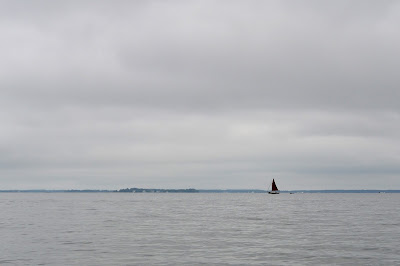 Under power north on the Miles River I see Doug's Cornish Shrimper slipping out of Fogg Cove, they have the main up but are under power too.  At Deepwater Point there is the hint of a breeze and I raise all three sails, motor sailing but really just motoring down the river. 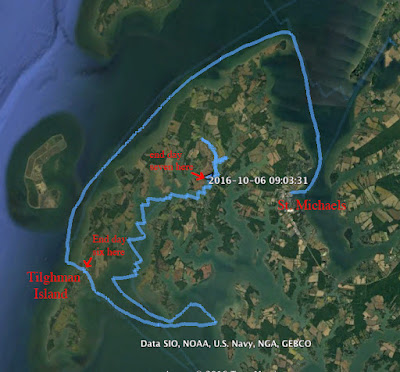 I round Tilghman Point at 11:00, the Shrimper not far behind but taking a wider path around the shoals than Spartina.  I finally admit to myself that there is absolutely no wind and bring down the sails.  I stay close to the shoreline while the Shrimper stays a few hundred yards farther out in the bay, the Shrimper's diesel engine slowly moving her ahead of Spartina.  A low overcast hangs over the bay with some clearing to the south. 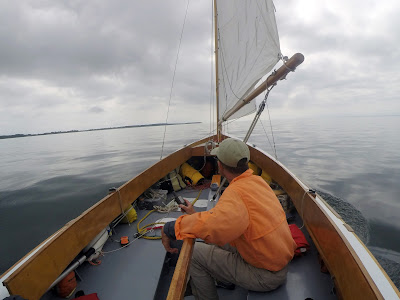 At noon a light north wind and sails up, motor sailing once again.  A thick cloud of seagulls hovers over schooling stripers to the northwest.  The wind comes and goes, a chill hangs in the air.  Nearing the entrance to Knapp Narrows the clouds begin to break up and the warm sunshine feels good.  It's still early in the day, the 1:00 nfl games are just getting under way, I consider going through the narrows to Dun Cove where I have anchored before.  But Tilghman Island, a favorite spot that holds onto the old Chesapeake Bay character, sounds like a great place to relax.  I tie at Knapp Narrows floating pier, walk a hundred yards or so to the marina/hotel office and pay my $2 per foot for an overnight stay. 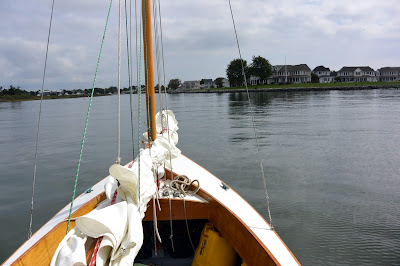 I spend a quiet afternoon - honestly relieved to be away from the crowd in St. Michaels - and walk down the Tilghman Island Country Store where I pick up a few items.  Then I sit by the pool at the hotel, catching up on my logbook and checking email.  Then back to the pier late afternoon as the current is running through the narrows and the stripers are out to feed.  I cast a lure and catch five or six small fish, shaking them all off the hook for another day.  Nearby a woman walks up and down each of the piers at the marina with a bucket and a net, reaching down once in a while to snag a blue crab on the pilings. 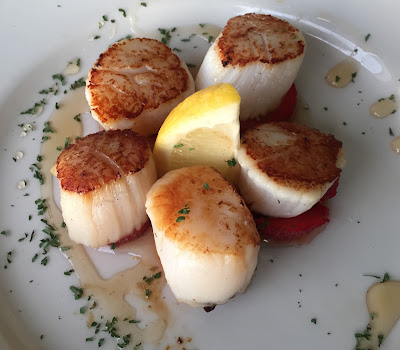 My favorite restaurant/tiki bar, Marker 5, just on the other side of the marina is closed with a gas line problem.  So instead I walk over the bridge to Character's Bridge Restaurant.  Their evening entree's are a little out of my price range so I settle for an appetizer of scallops, a caesar salad and a bottle of beer.  Perfect! 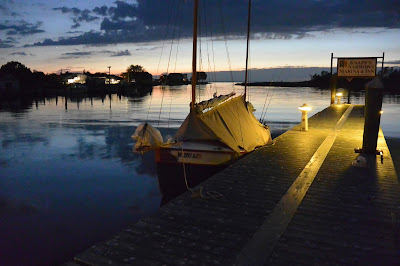