day four - shelter from the storm 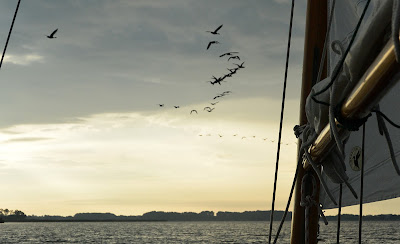 Up at 6:40, I can hear thunder rumbling to the southwest.  I check the forecast on my phone and see that I will be spending the next couple of days in the center of a storm.  Glassy calm in the cove but I can see the tree tops whipping in the wind.  Sail off anchor with two reefs tucked in the main.  Around the corner I'm exposed to a stiff wind.  Flocks of geese fly across Warehouse Creek. We reach Cox Creek by 8:00 and turn towards Eastern Bay.  Passing two deadrises working trot lines the thunder increases.  Approaching Eastern Bay dark clouds slide in from the south and the bay disappears in a heavy rainstorm.  I round up and sail back up Cox Creek, finding shelter in a little cove across from the mouth of Warehouse Creek.  Nothing to do but wait out the weather, hoping the storm passes so I can cut across Eastern Bay and the Miles River.  More thunder and a few flashes of lightning downriver. 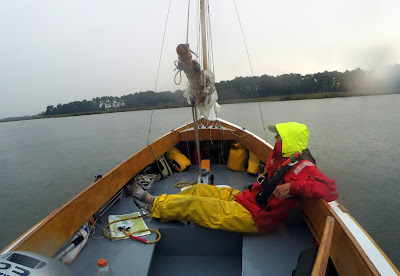 Under sail at 9:45, double reefed, still stormy but some clearing to the southeast.  Sun makes a brief appearance at the mouth of Cox Creek as I give a wide berth to the shoals at Turkey Point.  Tilghman Point visible ahead, sailing close on the wind I might make it on a single tack.  Very choppy on Eastern Bay, making 4 kts then dropping down to 2.5 as waves roll through in batches of three or four. 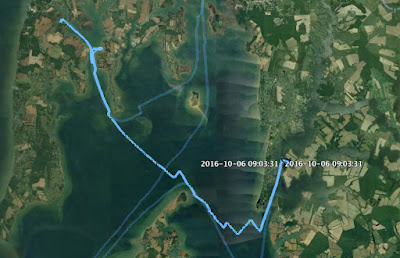 Most the way across the bay the sun comes out and the water ahead glistens.  Spartina heels and spray jumps out to starboard, Tilghman Point off the bow.  Great sailing.  Approaching the point a large cruising boat angles towards Spartina, four men in the cockpit with one shouting "What are you doing out in this weather?"  I shout back the weather is perfect, why wouldn't I want to be out?"

The wind falls just as we make Tilghman Point and we need to make a tack to round the shallows into the Miles River.  Once around the point I shake out the reefs and full sail to the Wye River. 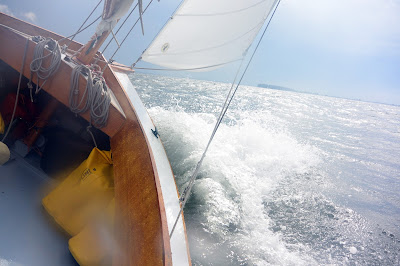 Birds are feeding all over the river and there would be some great fishing I suspect.  But unsure of the weather window I make towards the Wye.  We reach the entrance channel and follow the river north with the trees buffeting the east wind.  With a forecast of 2-3 inches of rain overnight and winds out of the east gusting to 35 mph I stay north on the river looking for a nice little cove to hide in.

I round up just south of Drum Point, then make a few tacks into a cove where the water is glassy calm. Anchor down and with a little bit of sunshine I spread out the foul weather gear to dry.  The cove is so well protected by trees and a bluff that Spartina drifts around in lazy circles. 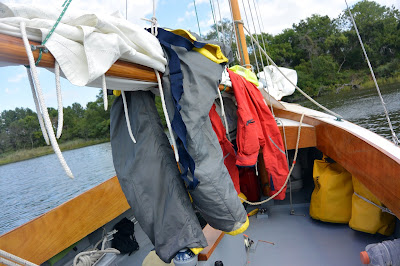 As evening approaches I tuck away the gear, clean up Spartina and set up the boom tent for the stormy night.  Getting ready to fix dinner I check my phone and find a text so unexpected I had to read it twice. 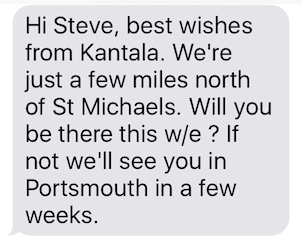 Kantala, Michael and Sheila, cruisers that I had met earlier in the summer on Craford Bay.  Twenty eight years earlier they had left Vancouver and sailed across the Pacific, as Sheila says, stopping at a few places islands along the way.  Rounding Africa and crossing the Atlantic, they were on their way to Nova Scotia when I met them.  And after a sail that weekend on Spartina we had met my friends MaryLou and Fred for lunch in Portsmouth when the talk about the Mid-Atlantic Small Craft Festival in St. Michaels had come up.  Michael and Sheila had decided to check out the festival. 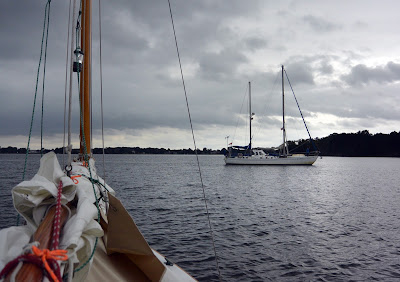 I text back "Small world, I'm a few miles north of St. Michaels too," and gave them my location near Drum Point.  They reply "We're headed towards Drum Pt now."

About 40 minutes later Kantala comes into view.  She rounds up to anchor out in deeper water and I raise Spartina's anchor to fall back to them 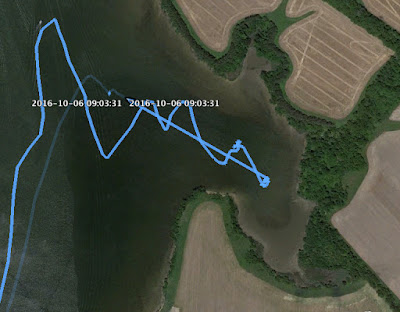 We raft Spartina up alongside the 44' ferrocement ketch and soon I'm on board, we're drinking Cuban beer and talking about our sailings since we had last met on Craford Bay.  I am invited to stay for dinner and we enjoy that with a warm bottle of white wine, talking as if we have known each other for years.  Dark and windy, Michael and Sheila invite me to spend the night on board.

Maybe it is something about boats and bad weather, but it seems like you can make friends fast out on the water. 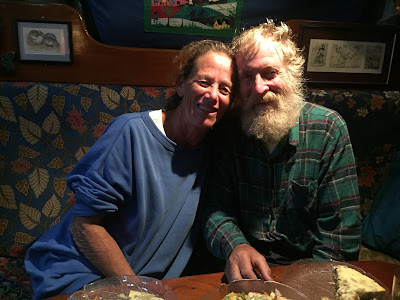 Awesome! Meeting up with old friend - on the water in a cool sailboat, no less! Wonderful.

I actually managed to get in a brief sail last weekend myself - on a friend's boat.

He got himself a ridiculous deal on this unusual old boat a year ago. It's a Medusa Warrior, 25-footer with bilge keels, from England. Last year, we picked it up from its former home in Arlington - right near the airport - and sailed it down the Potomac to Colonial Beach, VA. Well, we motored, really, since there was no wind, but still it was a fun three-day trip.

This weekend, we took it out in wind gusting to over 20 kts, lots of chop - sailed from Colonial Beach, down the Potomac (rip-roaring down wind the whole way - well, rip-roaring as much as that squat little boat can rip-roar) to Nomini Bay, where we anchored for the night. Had a very nice evening with some beer and some rum, slept like a rock, then the next morning, we worked our way back north.

Even just a short little overnight on a small sailboat is better than just about any day at work...

Very cool, Bill. I checked out the Medusa Warrior - nice boat, perfect for shallow waters and looks very solid too. Glad you had a few nice day on the Potomac. I've got to get up there some day (but I've always heard the mouth of the Potomac is a very rough bit of water).
Yes, friends on the water are great friends to have.

now and then 245 daily logs