A bumpy night.  I had anchored close to the mouth of Bath Creek on the west side.  A tiny swell wrapped around Eborn Point on the east side of the creek causing Spartina to roll port to starboard.  Not too bad, but not as comfortable of a night as it should have been. 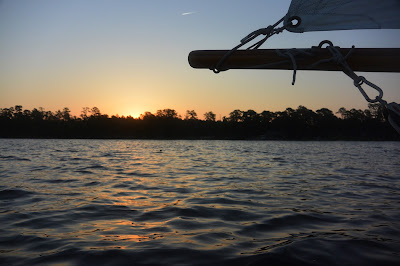 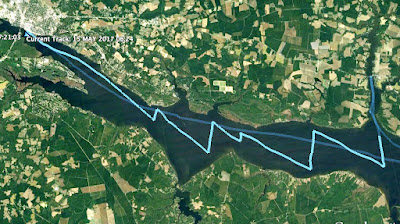 At 7 a.m. 3.5 knots up the dark brown river, pleasant and relaxing.  By 8 a.m. feel the breeze warm, it is going to get hot today, tacking at 3.2 knots.  By 9:30 passing marker 7 between Ragged Point on the north shore and Maules Point on the south, expansive Blounts Bay to the southwest.  Light winds and what winds there are begin to swing to the west.  By 10:00 making slow progress.  Lunch in Little Washington, as it is known, is not going to happen. 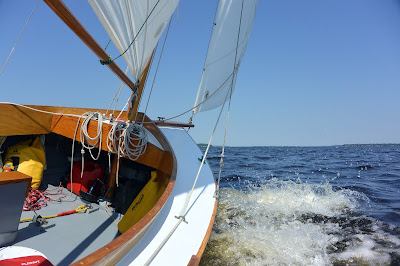 A handful of dolphin play outside of Upper Goose Creek and at 10:30 the wind begins to build, getting stronger, then falling off and then returning.  The wind is on the nose but then with each puff  the breeze swings to the southwest.  We make 5 knots on a port tack. 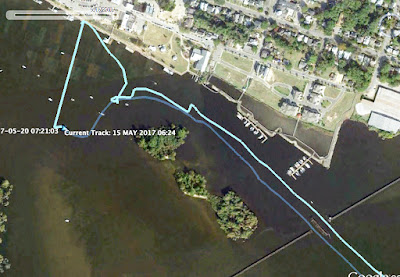 We slip past the old train trestle about 1:00.  Beyond the trestle with a brand new marina to starboard the wind is blocked by Castle Island to port.  More commonly called The Castle, the island has been over the years home to a kiln, a civil war fort, a fish house and a goat farm.  Now grown over and surrounded by the remains of small sunken boats, just enough wind gets over the island to carry us up to the Washington waterfront. 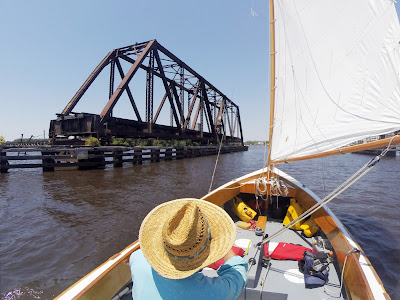 I tie up at a transient dock and friendly dockmasters tell me I can stay a day or two with no fee.  Gear tucked away on Spartina I walk a block to the downtown to have some iced tea and explore a book shop.  It is a hot afternoon and I hide from the sun under a gazebo.  An early dinner at Rib Eye's, taking extra time to sit in the air conditioning and have one more glass of iced tea.

Early evening I cast off and make slow easy tacks up and down the waterfront, enjoying the old brick buildings of the very southern town.  As the sun goes down I round up a little west of The Castle to drop anchor for the night.  As I begin to set up the boom tent small boat comes out from the waterfront, a college professor and a horse veterinarian, either just married or about to be.  They circle Spartina a couple of times and I invite them over to tie up alongside.  Friendly and interesting people, we spend the evening talking about Little Washington, the town's surprising number of fine restaurants, the new waterfront and marina.  I have always thought of it as a nice waterfront town, it just seems to be getting better and better.  As night falls my new friends cast off.  I finish with the boom tent and slip into the bivy.