Another clear morning, headed east out of the creek under full sail at sunrise. The wind was forecast to be light out of the north in the morning, switching to southwest in the afternoon. 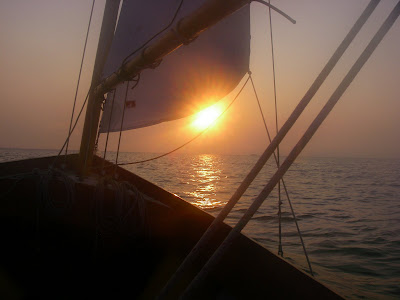 At the south end of South Marsh Island I turned southwest into Kedges Straits, the water that separates South Marsh Island from Smith Island. I photographed Solomons Lump Light, which dates back to 1895. You can see that the light tower sits off the to the side of the brick platform. A lightkeepers house once stood on that open space, but was removed when the light became automated in the 1950's.
Watching my position in relation to the light showed that I was moving east back into Tangier Sound. The wind was dropping and the incoming tide was carrying Spartina sideways (from my experience tide is much more a factor in Chesapeake Bay than in the Sounds of North Carolina). I started up the outboard and motorsailed through the straits and down the western edges of the Martin National Wildlife Refuge, the northern end of Smith Island. The wind picked up as I sailed past the jetties that are the western entrance to Ewell. Bruce and I had sailed out of those jetties a year earlier. 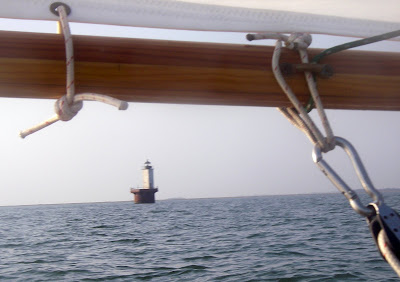 Sailing in the shallows on the western side of Smith Island I got an education in local navigation. I was looking for Sheep Pen Gut near the community of Rhodes Point to cut across the lower portion of Smith Island to Tylerton. My chart showed a marker southwest of the gut with a channel 50 feet wide by 5 and 1/2 deep. The word "gut" should have told me something. It didn't say creek or channel or river. It said gut. I've heard that term a lot on Tangier and other places on the eastern shore. I've seen it used for everything from a 20 yard wide channel to a tiny opening barely wide enough for a kayak. (I think - but don't know for a fact - that the term gut comes from the dutch word "gat" which means hole or opening).

So I looked for a nice channel with a marker and didn't see it, sailed right by Rhodes Point (I could see the houses behind the marsh) and realized I must have passed the gut. So I turned back north over the shallows toward the north end of Rhodes Point. I saw a small skiff rushing right along the marsh headed south. I guess it must have been heading for the gut. I looked over the side to check my depth and when I looked back up the skiff was gone. I didn't see where it went but figured it had to have slipped into the gut.

I headed out into deeper water, went north a bit and then came south along the marsh until I saw the small opening angled from northwest to southest, the marsh in front and behind overlapping so it was hard to see from off the shore. As I got close I saw that it was in fact marked - but only by three small tree limbs stuck out in the water. 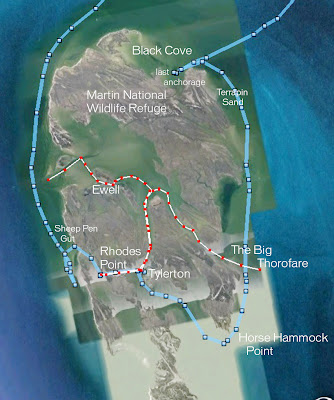 If you look at the satellite photo of Smith Island above you'll see Spartina's path, in blue. What I came to realize was the only waterway connecting the villages with the standard 15 foot tall red and green markers is drawn in white and red. That is The Thorofare. There are dozens of creeks and guts in and around the island, but the only well marked passage is The Thorofare. All the others are marked by sticks, pipes, pvc or whatever was handy to the waterman at the right time.

Below you'll see a typical channel marker for Smith Island. They are there for the local watermen who know what the markers mean, which side to pass them on and what tides are good for the channels. For non-locals like me it is use at your own risk. 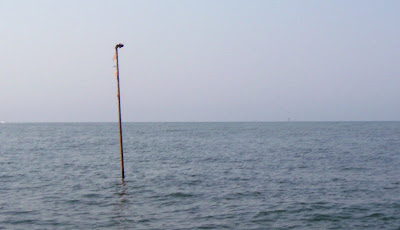 So I entered Sheep Pen Gut and, with sails down, motored south along the Rhodes Point waterfront, a mixture of well-kept homes, vacant homes, crab shacks and crumbling piers. At the south end of Rhodes Point, near a boatyard with a marine railway, the channel turned east towards Tylerton. 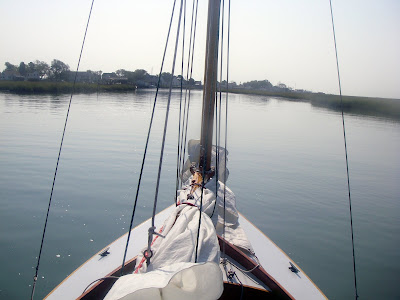 I rounded the corner to find three pipes jutting out of the water marking some shallows. But I wasn't sure which side to pass on. I chose the north side, it was next to the lift for hauling workboats out of the water and figured there had to be deep water there to bring the boats in and out. I slid right up on a shoal (the centerboard was raised so the flat part of the hull sat firmly on the mud). I used my oar to push back off the shoal and backed right up on another shoal. So I pushed off, that made a tight turn back to the channel and went on the south side of the three pipes. 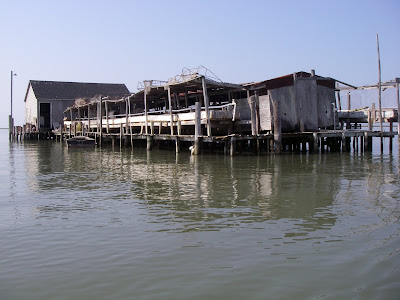 There were navigation markers (finally!) "5", "3" and "1" that led me from Rhodes Point to Tylerton about a 1/2 mile away. I motored down the channel and tied up at the public pier (I'm assuming it was a public pier, it wasn't marked as such but had a "use at your own risk" sign on it). There was an old crab house on the pier, a bushel of live crabs sitting outside and a bushel of steamed craft right next to it. A gentleman on shore told me Spartina would be fine where I left her. 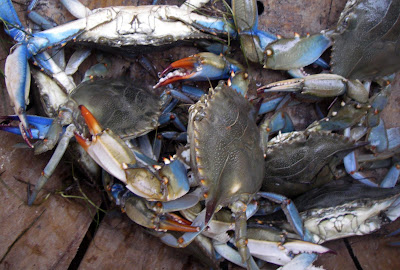 Spartina was tied up just after 11, a perfect time to walk to Drum Point Market for some lunch. It was just two blocks to the market (I think the entire village is just six blocks by eight). This was a real treat, I was very happy to be there as this was one of the restaurants that was listed in the NY Times piece that was the basis for the Crabhouse 150 sail last year. We didn't make it to the Drum Point Market on that trip, but it was well worth the visit this time. 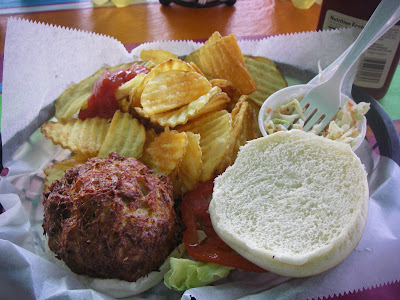 There's my crabcake sandwich above. I haven't consulted with Bruce about it but when I compared it to our crabcakes from last year it would have come in a very strong #2 overall (those crinkly chips made from fresh cut potatoes where a real plus). The other Smith Island crabhouse, Ruke's, retains the #1 rating based solely on their generous use of jumbo lump crabmeat.
But none-the-less this was a great lunch, sitting on a nice enclosed porch on a very pretty day, watching the locals as they passed by on the narrow lane.
Lunch was great, but it did not last long enough. By just after noon I was untying the lines and getting back out on the water.
It took me a while to figure out which way to go. I wanted to head south on Tyler Creek and then turn east at Horse Hammock Point. But there were no markers (that I could see). Finally three small fishing boats leave the waterfront heading south and I followed along. The channel went south, then curved east and then south again, all marked by the occasional stick or pipe placed out in (at least it seemed to me) the middle of nowhere. Once I spotted the markers and watched the small boats ahead of me, I began to see the path of the creek through the shallows. 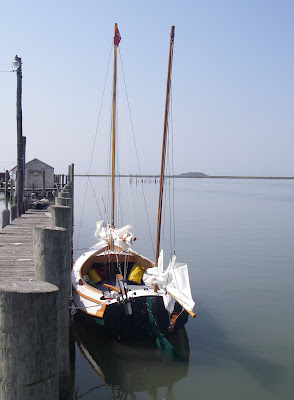 By 1:30 I had crossed over the shoals at Horse Hammock Point and was sailing north along the eastern side of the island. I say "sailing" but it was almost a drift. I think the tide was carrying me more than the wind. But that was ok, it was my last full day on the water, I was very happy to just ghost along under the gentlest of breezes. It took a couple of hours to make it up past the little island that marks Drum Point. There the wind and tide failed completely, so I started up the outboard and rounded Terrapin Sand into Back Cove. Dropped anchor in the beautiful marshed lined bay at 4:00. 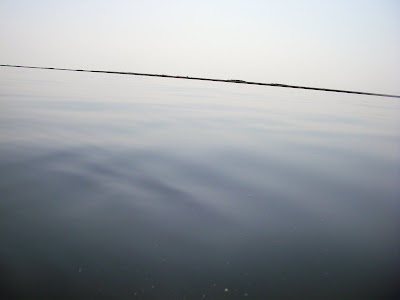 Once anchored and with the boat cleaned up I jumped over the side for a really relaxing swim in the warm water of Back Cove. I can't begin to describe how great it felt. I just floated there for the longest time, checked out the hull of Spartina, swam down and looked at how the anchor had set in the soft bottom. And then I floated and floated some more. Afterwards I stood up on the foredeck and poured my last gallon of fresh water over my head for an open air shower. 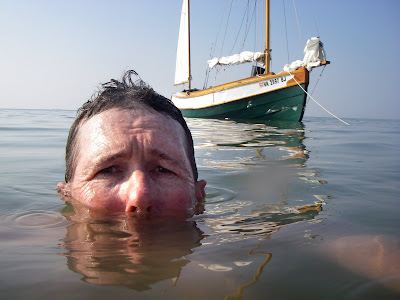 That night for dinner, the last meal of the trip, I took a hint from our last dinner on the Tag Team 200. Instead of cooking ( and dirtying up pots and pans) I made dinner out of the leftover appetizers. Smoked oysters, anchovies on crackers, cups of fruit and peanut butter crackers. Just right for a nice, simple meal in a pretty cove. (I do wish I had had an ice cold Carib Beer, like we had on the Tag Team sail.)
I filled out my logbook, read the last chapter of The Lost City of Z (perfect timing to finish the book on the last night of the trip), and relaxed.

The bivy was all set up and it was probably time to go to bed. But instead I just stood there on the aft cockpit seat, resting my arms on the main boom. The breeze was warm and out of the southeast. The moon, nearly full, was rising to the east. And I could look out over Black Cove, past the marshes and see Tangier Sound and the lights of Crisfield in the distance. I stood there for the longest time - 30 minutes, maybe 40 or maybe an hour, I don't know. I just stood there and soaked it all in. It was almost time to go home, but I wanted to enjoy that last night on the water.

Email ThisBlogThis!Share to TwitterShare to FacebookShare to Pinterest
Labels: life on board, meals

Perfect! Both the sail and your description of it.

Thank you Mary Lou. I was just thinking it was a year ago that we were sailing together at St. Michaels. That was a great day.

OK, I'll bite. What knot are you using on the main sail to boom lashing?

OK, so now I need to add a visit to Smith Island to my bucket list.

Bill,
I cannot say enough good things about Tylerton. It had a very nice feel to it. I'll be back. I've been to Tangier (several times), Ewell (last year on the CrabHouse) and sailed along the Rhodes Pt. waterfront on this trip. Each village has a different feel. I like them all, Tylerton best of all. But don't forget Ruke's in Ewell.
steve