Dawn comes clear and breezy, the wind now out of the west.  Sails are up with the sun, Spartina doing five knots across calm West Bay.  Passing Tump Island I see a skiff round the point, the same skiff with the fishermen from yesterday evening.  I wave and they respond in kind.  I wonder how Spartina looked to them, all sails set against the morning sky. 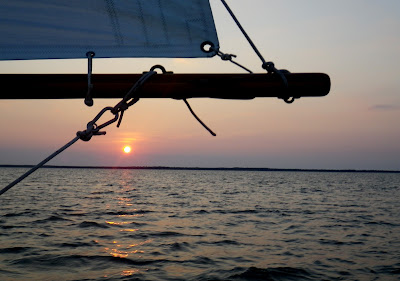 Leaving the bay I point up a little to cut south of tiny, marshy Racoon Island, choosing the deeper water of The Narrows behind the island instead of shoals of Swan Island on the far side.  Out of The Narrows past Point of Marsh we feel the rolling waves coming up the Neuse River, the waves building steeper over the shallows that reach out a mile past the point.  Six knots as the waves stay with us for longer than expected.  I round up and tuck in a reef. 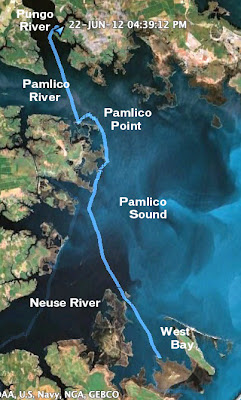 Mid-morning we are over deeper water.  The waves disappear, the wind moderates and I shake out the reef.  A hint of smoke from the fires arrives in the air, then disappears.  Just a few miles from the mouth of Jones Bay and I recognize nothing along the tree-lined shore.  The Bay River is there somewhere, as are Boar Point and Sow Island Point.  I finally see a water tower in the distance, the one near Hobucken, and then I make out the markers for the restricted area - a military bombing target - to the north and east.

At marker "2" at the mouth of Jones Bay I turn north past Sow Island Point.  A school of dolphin join me off of Middle Bay, I always seem to find dolphin along this stretch of the shore.  Blue skies and the water reflecting the skies, the grass along the shoreline a bright green.  I skirt the grassy points and cast a lure in search of speckled trout.  Mullet jump in silver splashes in the shallows.  We pass Big Porpoise Bay and Little Porpoise Bay, then cross the wide mouth of Mouse Harbor.  And, at Pamlico Point, the wind fails. 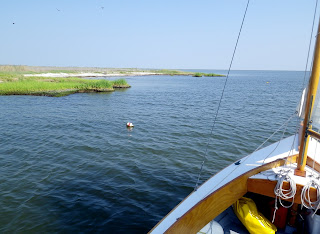 I expect the afternoon winds will fill in.  But when?  I have lunch and listen to the radio,  then look back across Pamlico Sound for hints of a breeze.  A few puffs of air push me past Pamlico Point, or maybe it was the tide carrying Spartina.  I see ruffled water to the south, I think I can hear the wind.  But I can't catch it with the sails.  Drifting at noon, it becomes very hot.  Then a little breeze, then no breeze. 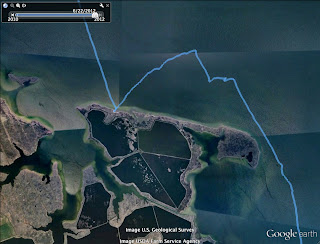 I can see my goal for the day four or five miles to the north, the Pungo River.  I have no doubt that once the afternoon wind fills in it will carry me there quickly, I don't want get there under power.  Instead I start up the outboard and motor to a nearby beach along the Pamlico River shore. 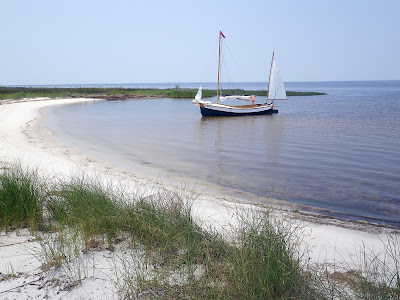 Dropping the anchor I jump in the water to cool off, then explore the beach.  And then another short swim as the wind fills in from the southwest.

The wind, just like yesterday and the day before, is strong and hot.  It carries us across the Pamlico River to the brown waters of the Pungo River.  We make a little over four knots as the sun beats down and the wind seems to burn hotter and hotter.  There is no shade on Spartina and I dunk my hat in the river water to cool off. 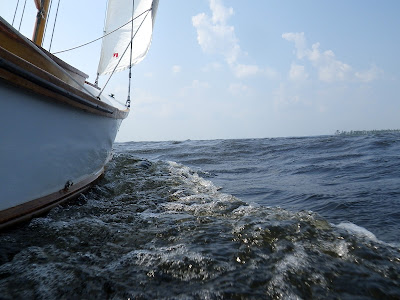 I look at the charts for an anchorage for the night.  We bypass Abel Bay at the mouth of the Pungo, look at Fortescue Creek and find it too exposed to the southwest winds.  We settle on Allison Creek just inside the entrance of Slade Creek on the east side of the River.  From the charts I'm not sure that Allison Creek will be deep enough, but we tack in easily and drop the anchor surrounded by pines trees and spanish moss. 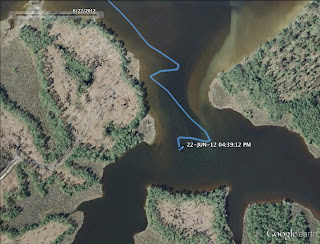 For the second time today I jump in the water to cool off.  It is deeper than I expected, and again I find the chilled waters down near the bottom of the creek.

I wake later that night as Spartina spins at her anchorage.  Thunder and lightning, the winds of a squall swirl through the tall pines.  The squall moves on and the cove calms.  I fall asleep to the sound of a few heavy rain drops falling on the bivy. 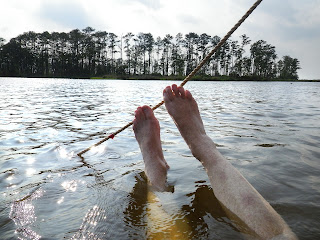