day two - the smoke, the canal, the current

I wake in the night to clear skies and the stars, the pennant at the mast top fluttering in the breeze.  I wake again, overcast, no wind, the hum of  mosquitoes.  I wake a third time to a loud "whooshing" sound.  Dolphins? I wonder, but it seemed too loud for that.  I fall back to sleep. 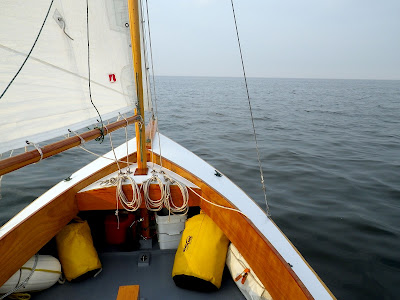 I wake again at 5 a.m., still to the hum of mosquitoes.  No breeze at all and the bugs hover outside of my bivy.  I jump out, start the outboard and haul in the anchor to motor out of the creek away from the bugs.  I go to untie the tiller and find the source of the loud noise.  My flotation vest, hanging from the tiller, is inflated.  It is as tight as a drum.

I motor outside of the creek, but don't bother anchoring.  Spartina drifts off the beach while I tuck away the sleeping gear and examine the vest.  It had been set for "automatic" inflation and the small pill that sits between the pin and the CO2 cartridge had, after five years of rain, fog and spray, crumbled.  It takes me a few minutes to figure out how to deflate the vest - something not explained in the instructions printed on the vest - insert the spare CO2 cartridge and set the vest for manual inflation.

We are under sail by 6:30, heading SW on the Neuse River.  Spartina moves along at three or four knots, a hint of smoke in the air from controlled burns inland that had become, according to the news reports, uncontrollable.  I can see three plumes of smoke, one to the west and two to the north.  The heat of the day starts to build at 7:30.  The wind pleasantly seems to follow the arc of the river and it is easy sailing.  I have sailed the Neuse River three or four times over the years, always with Bruce along as my sailing partner.  I think about that, then try to remember why he is not along on this trip.  Scheduling maybe.  At 9 a.m. the wind fails. 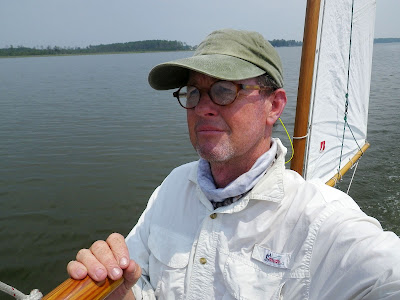 I can see Oriental across the river, too far away for a lunch stop.  The dark sails of the cat ketch, the same one I had seen yesterday, can be seen out in the middle of the river heading south.  I try to find the breeze and cannot.  Under power at a little before 10 a.m., approaching Adams Creek at 10:30.  Two large sailboats are coming out of the creek entrance, a shrimp boat is heading in.

We head into the creek and find the shrimp boat anchored out of the channel with dolphins swimming all around the green nets that dangle in the water.  I motor by the shrimper under a light overcast, the temperature warm but still comfortable. 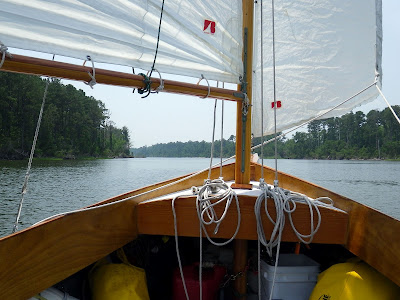 The wind falters as I approach Seagate Marina just off of the canal.  I motor in to top off my gas tank and pick up some cold drinks.  I look to see if they have any good snacks on the shelves, all I find are micro-waveable hamburgers.  I leave with just the drinks. 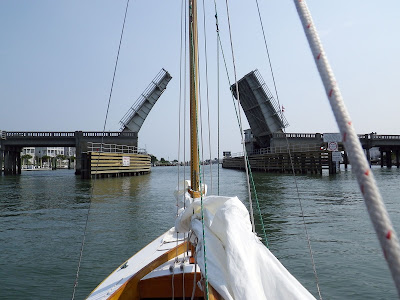 Back on the ICW a strong gusty wind kicks in from the south, directly up the canal.  I stay to the side to avoid the chop and waves funneling up from the river.  A heavy overcast makes it feel almost stormy.  I can smell the smoke again, but only briefly and then it goes away.   The south wind stays until I reach the Newport River.  The channel south to Beaufort is shallow, but well marked.  I raised a reefed main and the jib and tack back and forth across the channel, going well past the channel markers until I can see a change in the water color or the cb touches the bottom.

The channel splits and I take the eastern, less heavily travelled channel that clings to the shore and curves south toward Beaufort.  With one more point to round I see it is getting close to 4 p.m.  Knowing that I will have to motor through the draw bridge in Beaufort, I crank up the outboard to make it to the bridge for the lift on the hour. 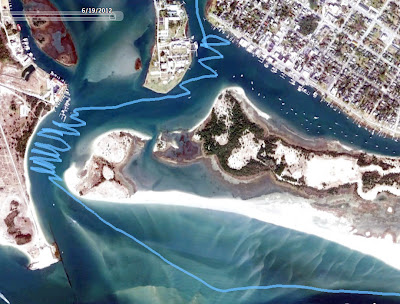 Once through the bridge I raise the sails alongside the marine laboratories on Pivers Island.  There is an incoming tide and the wind is coming from the same direction.  A handful of tacks to get past Pivers Island, then a long tack to reach Radio Island. 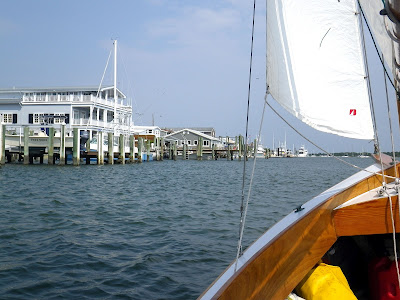 The tide is rushing between Radio Island and Bird Shoal.  I start a series of tacks to get out and around Bird Shoal.  The wind has moderated, the temperature has cooled.  No smoke, no clouds and it is a beautiful afternoon.  Wonderful sailing.  I am in no rush to get anywhere and I can't imagine a better way to spend my time.  I use the people on the beach of Radio Island as my marks for making tacks, gaining ground mostly but sometimes losing ground in the current as the wind comes and goes.  Dolphin play in the channel, the small ferry boats carrying visitors from Shackleford Banks pass by along the white beaches of Bird Shoal.  I make one last tack back into the channel, come about and pass over a shallow point to find we are free of the current. 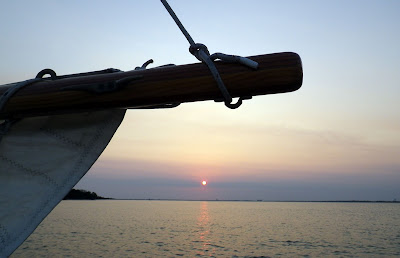 I sail across to the backside of Shackleford Banks about a mile east of Beaufort inlet and drop the anchor near shore at 6:30.