I wake in the night and listen to the wind.  It howls.

Before sunrise I wake again and from the bivy I look straight up and the JW pennant blowing straight aft from the mast.  I turn on weather radio in time to catch the Pamlico Sound forecast:  small craft warnings, 20 to 25 mph wind and two to three foot waves. 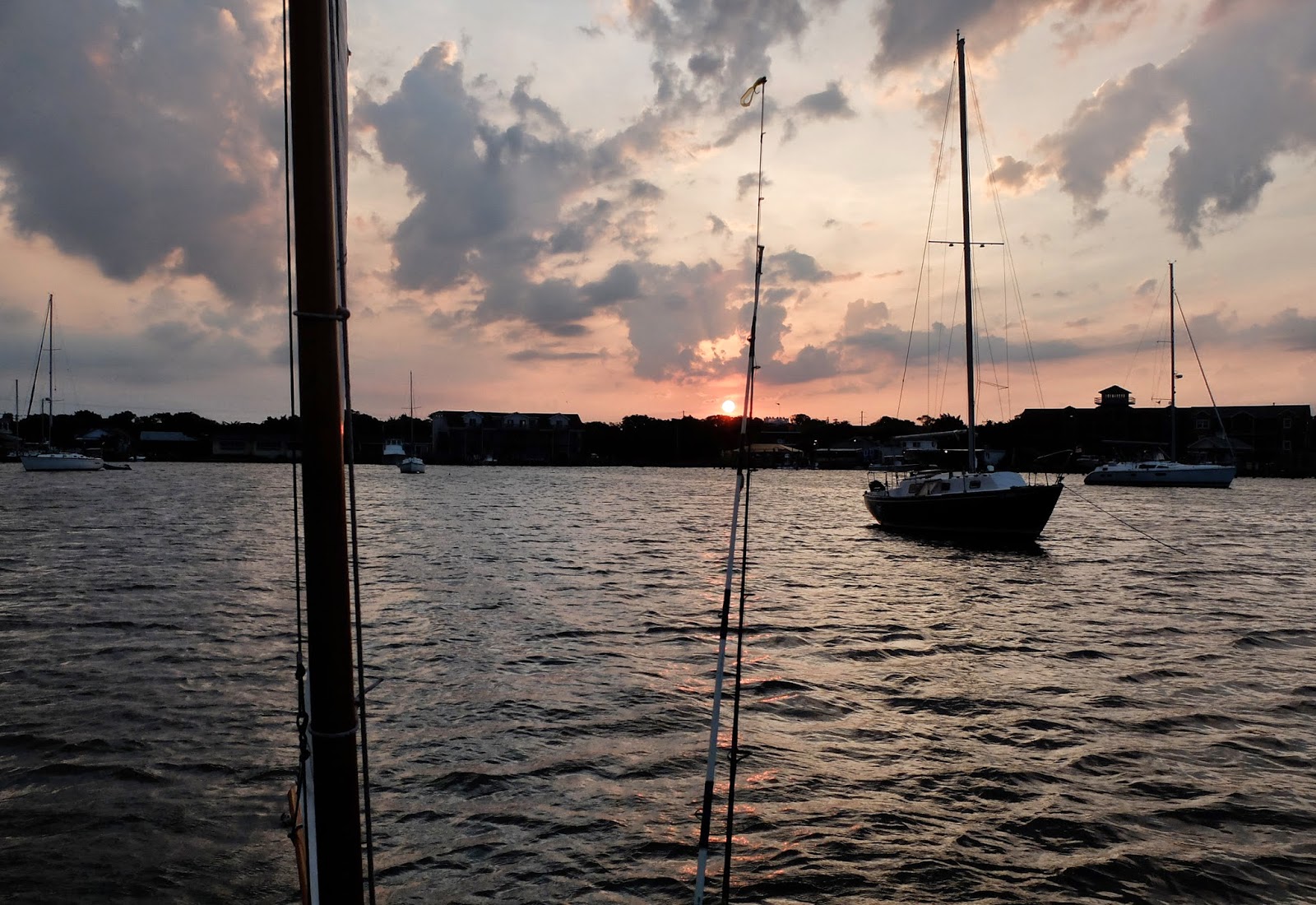 Under cloudy skies I tuck the sleeping gear away, tie a reef in the main, tie a second reef and then wrap a line tightly around the main boom, sail and gaff.  Spartina is ready to sail.  I sit back in the cockpit for a few minutes, listen to the radio one more time and get the same forecast.  I look north across Silver Lake to the pier where the schooner Windfall is tied.  At the base of the pier is the dinghy dock and Rob's shop.  Maybe another day on Ocracoke would be nice.  But maybe not - I want to get back on the water. 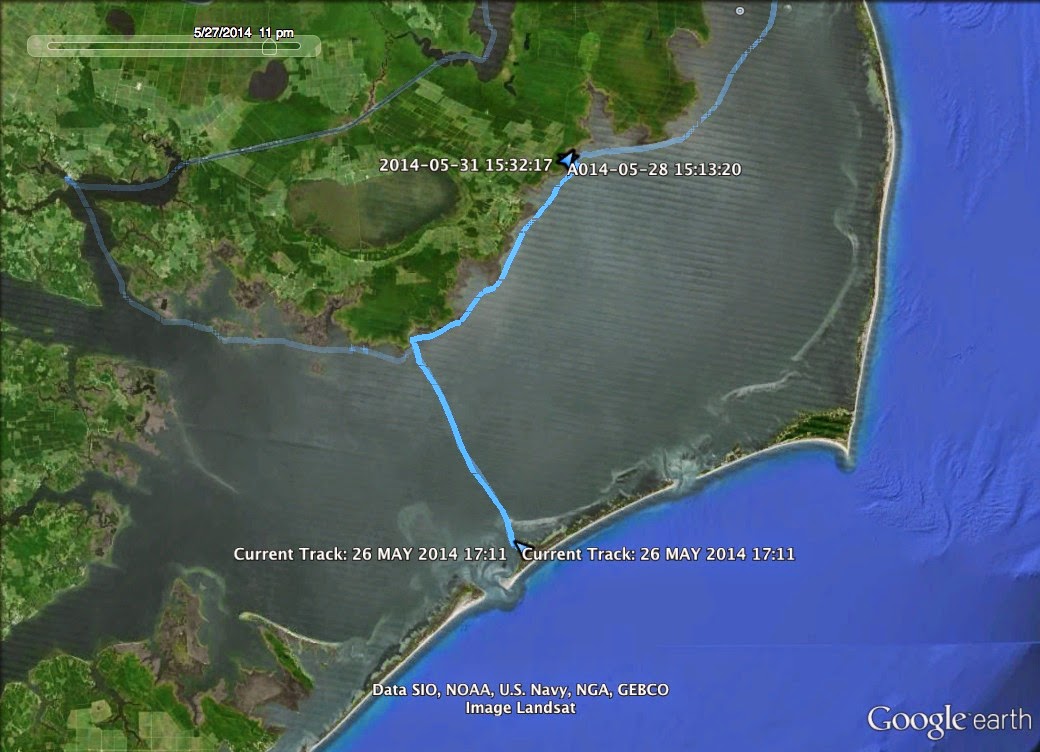 Under mizzen and jib we sail off anchor.  Two ferries are at the dock just inside of Silver Lake.  I start the outboard and head out between the jetties and directly into the wind on the channel.  I could, under m and j, tack my way down to the marker, but with two ferries coming behind me I want to get out of the way as quickly as possible.  We reach the marker where the channel doglegs, cut the power and fall off the wind.

The skies are getting lighter and the sun is breaking through to the east.  I hold up my waterproof camera and take a few photographs, my attention going from the channel markers to the camera and back.  I hear a horn toot, look behind me to see the ferry Pamlico coming up the channel behind me.  By now I know the drill.  I call the captain on channel 13, identify myself, tell him we'll cling to the red markers to let him pass by.

We're out of the channel onto Pamlico Sound at 7:00, lots of spray and I put on the foul weather gear. We make five knots under mizzen and jib, steering by Lower Middle Ground light which I keep just to the port of the bow sprit.  The forecast is accurate and we barrel along through the water heading NE with SW wind on the beam.  Perfect.

Past the light tower we get the biggest waves, waves that have rolled across Pamlico Sound and built on the Lower Middle Ground shallows.  Coming in batches of two or three, a few of the waves break.  The waves hit the bow, throw spray up into the air and the spray is blown into Spartina's cockpit.  I use a cup to get the water out of the aft cockpit, the bunk flat up forward will have to wait and I watch the water collect on the starboard side around the cook kit.

I think of dropping the mizzen and heading downwind, thinking I could make a good run north on the sound.  But the waves are big and hours of surfing down the waves doesn't appeal to me.  Better to get across the sound and get in the lee of the mainland.  I steer with my legs braced against the starboard seat, the tiller in the crook of my right arm.  The tree line is showing on the horizon ahead.  The gps shows six knots.

At 9 a.m. we are approaching Bluff Point, the waves smaller but more confused.  East Bluff Bay at 9:30, we sail up into the bay and drop the anchor near our anchorage from a couple of days earlier.  I sponge out the boat, spread the foul weather gear out to dry and have some crackers.  And I relax.  My arm hurts and I look inside my right elbow to see a bruise from the tiller.  The sun comes out, terns squawk nearby, I must have anchored over their fishing grounds. 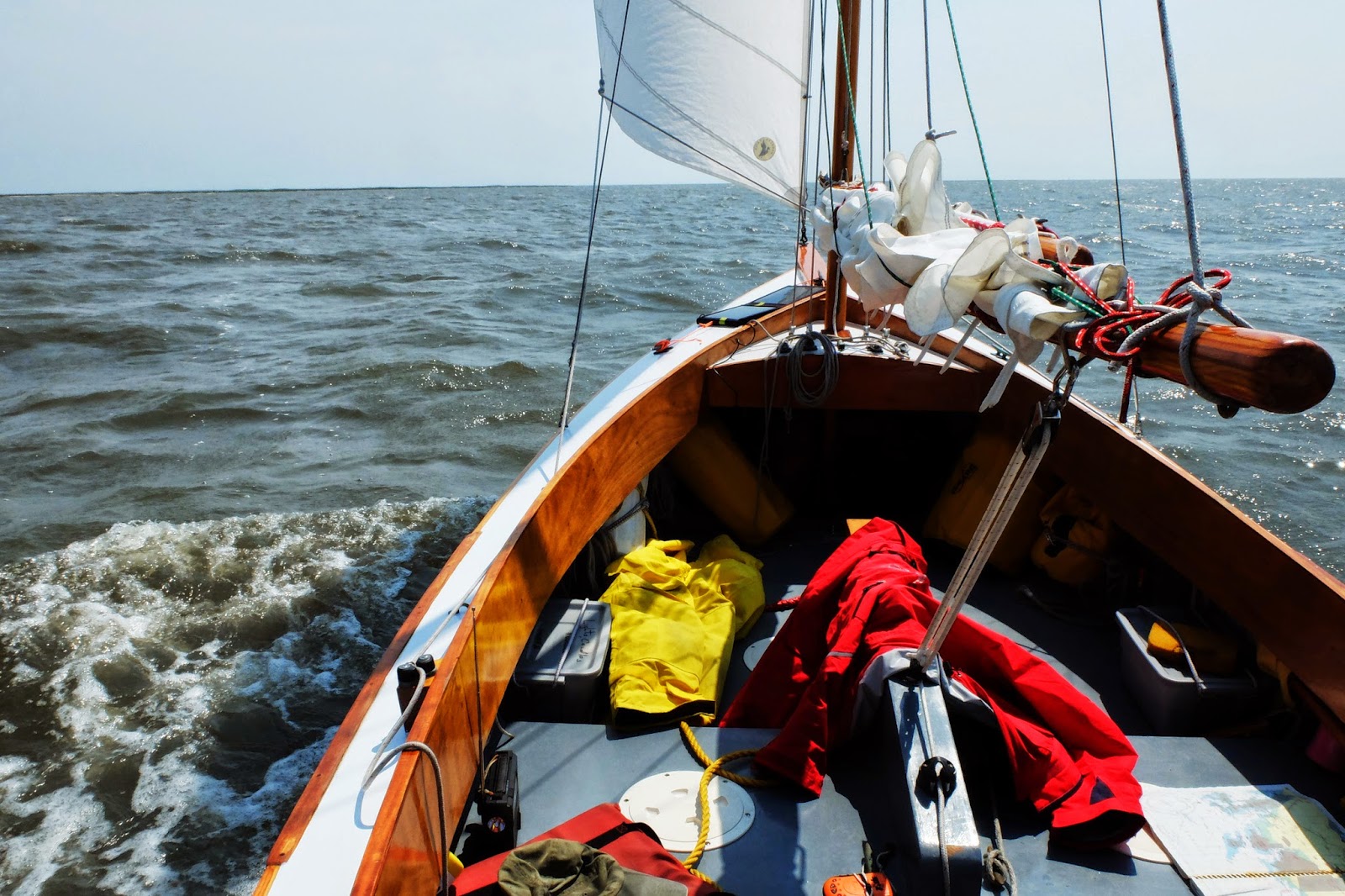 A little after 10:00 we raise the anchor and sail off under jib alone.  The water is calm, the strong SW wind pushing us north along the western shore of Pamlico Sound.  The am/fm radio is soaked from the salt spray, but I'm still able to pick up a classic rock station.

North Bluff Point slips by, as does the marker for the Lake Mattamuskeet out flow channel.  Just after 11:00 I watch flocks of ibis heading from Wysocking Bay to Hog Island, a few minutes later we are crossing the wide mouth of Wysocking Bay.

The wind slacks at noon approaching Long Point.  Sailing out around the shoal we feel the waves coming up the sound.  Mizzen and the double reefed main go up in the early afternoon, only to be brought down a few minutes later as we reach out again into the sound and feel the waves and wind tugging at Spartina's stern. 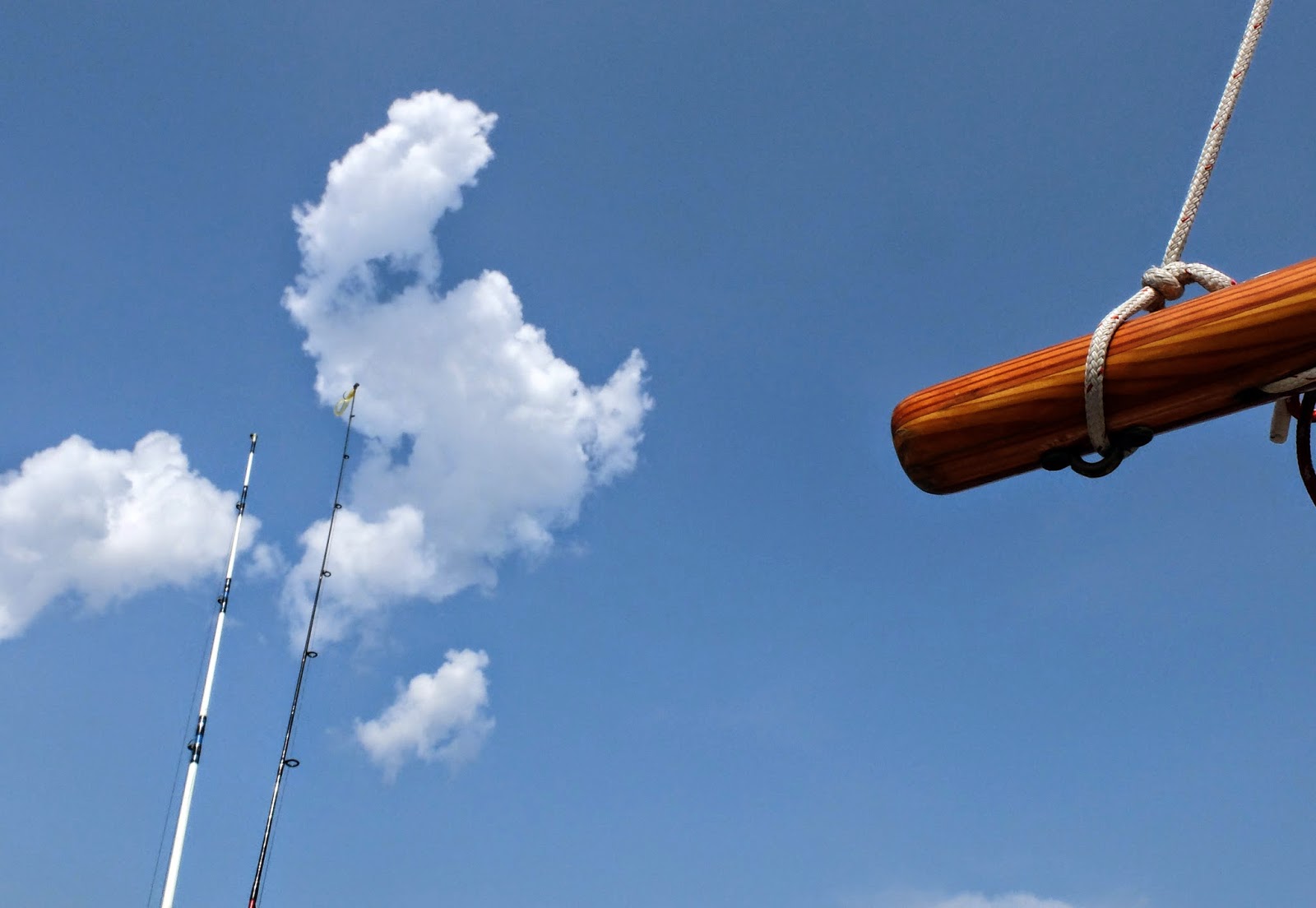 Not yet 3:00 and we turn west into Otter Creek.  Not as much protection as I had hoped, the marsh is flat and the wind howls across it, the waves wrap around the point.  We set out the anchor and hope for a falling wind.  Tired, I take a nap.  Then a light dinner and some reading.

I crawl into the bivy before the sun is down. 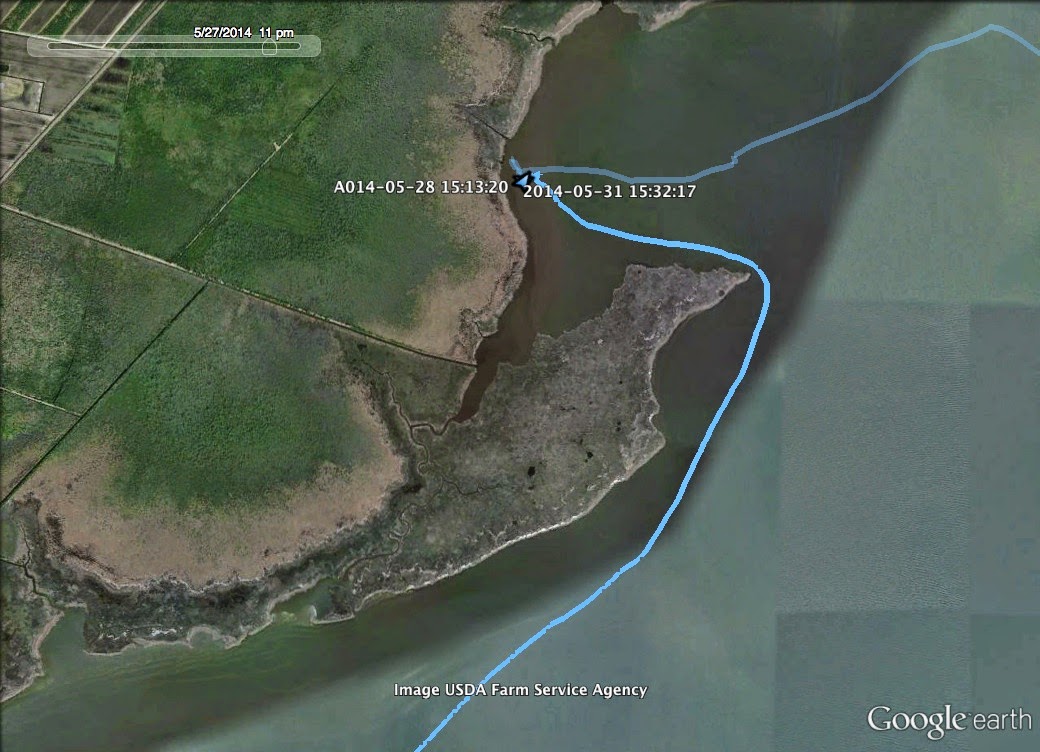