day two - the swamp, the canal

Night.  Wake to brilliant stars.  Wake to swirling winds from a small thunderstorm passing to the north, the skies overhead still crystal clear.

Dawn.  Calm, with golden light on the horizon. 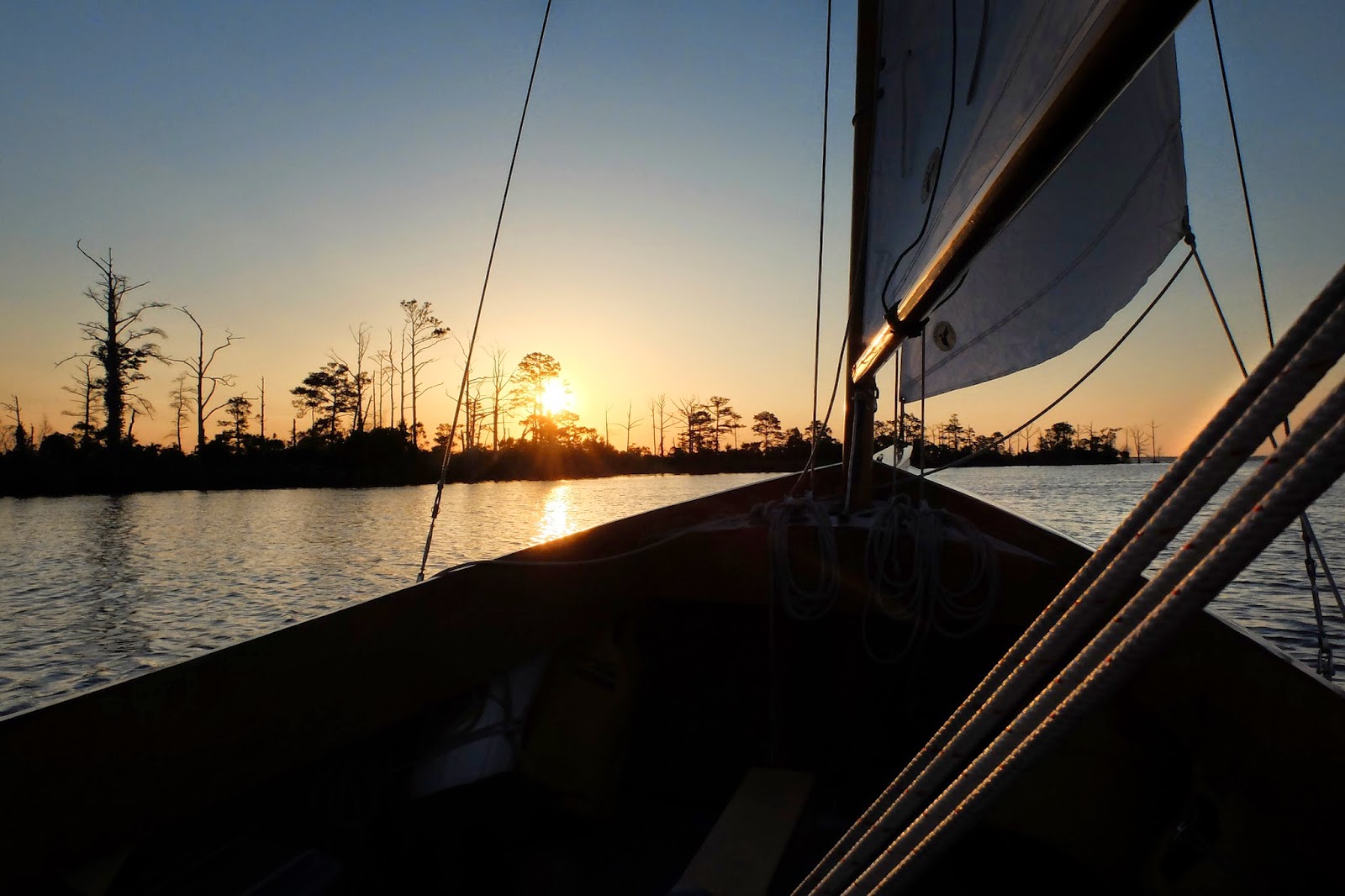 We sail off anchor just after 6:00 a.m., clear morning with a NNE wind.  Trees all around and I can't see the opening to get out of the swamp.  We follow the gps track from last night, curving up close to the wind in the Thorofare, then falling off to slip behind the stand of dead cypress trees as we leave the swamp and enter the river.  More wind out on the Alligator River and the dead trees rock back and forth in a surprisingly large swell. 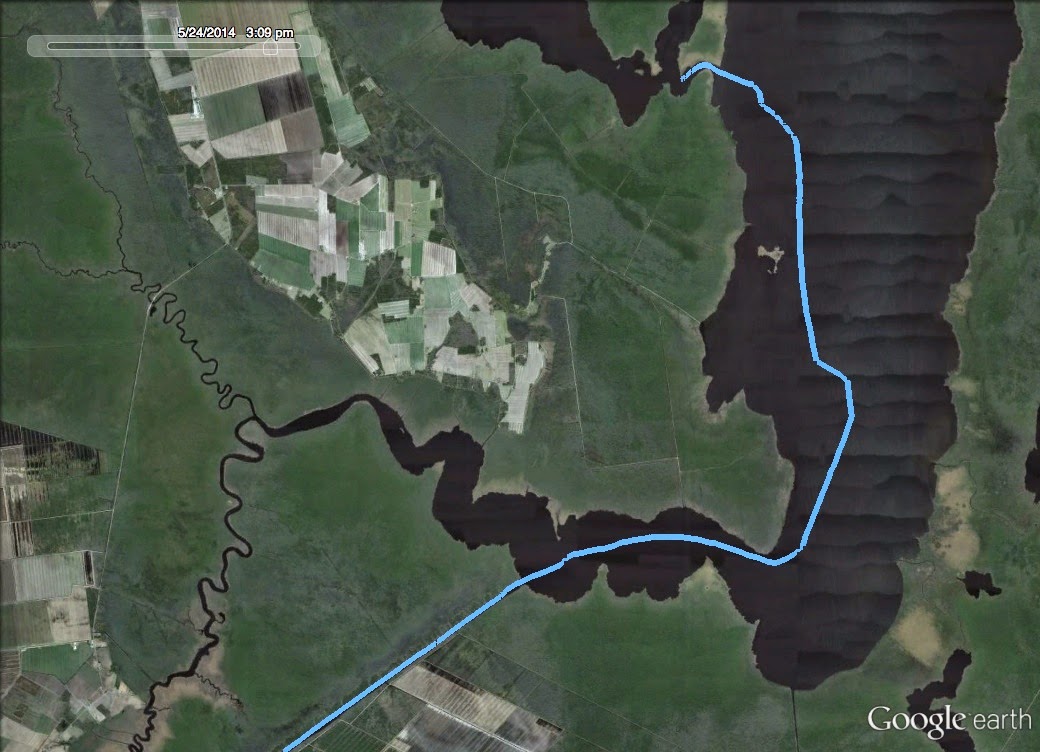 The wind pushes us down the Alligator River, the large swells lifting Spartina's stern and we surf down the face of the waves.  I jot down 5.9 knots in my notebook, then a minute later 7.3.  I see the masts of sailboats heading north on the river, just one of them with sails raised.  They pound through the swells and I am happy to be heading south instead.  We pass by a little unnamed island that caught my eye on the charts yesterday when looking for an anchorage, but I see it would have offered no protection from the N and NE wind.  The same with Rattlesnake Bay, which we pass a few minutes later. 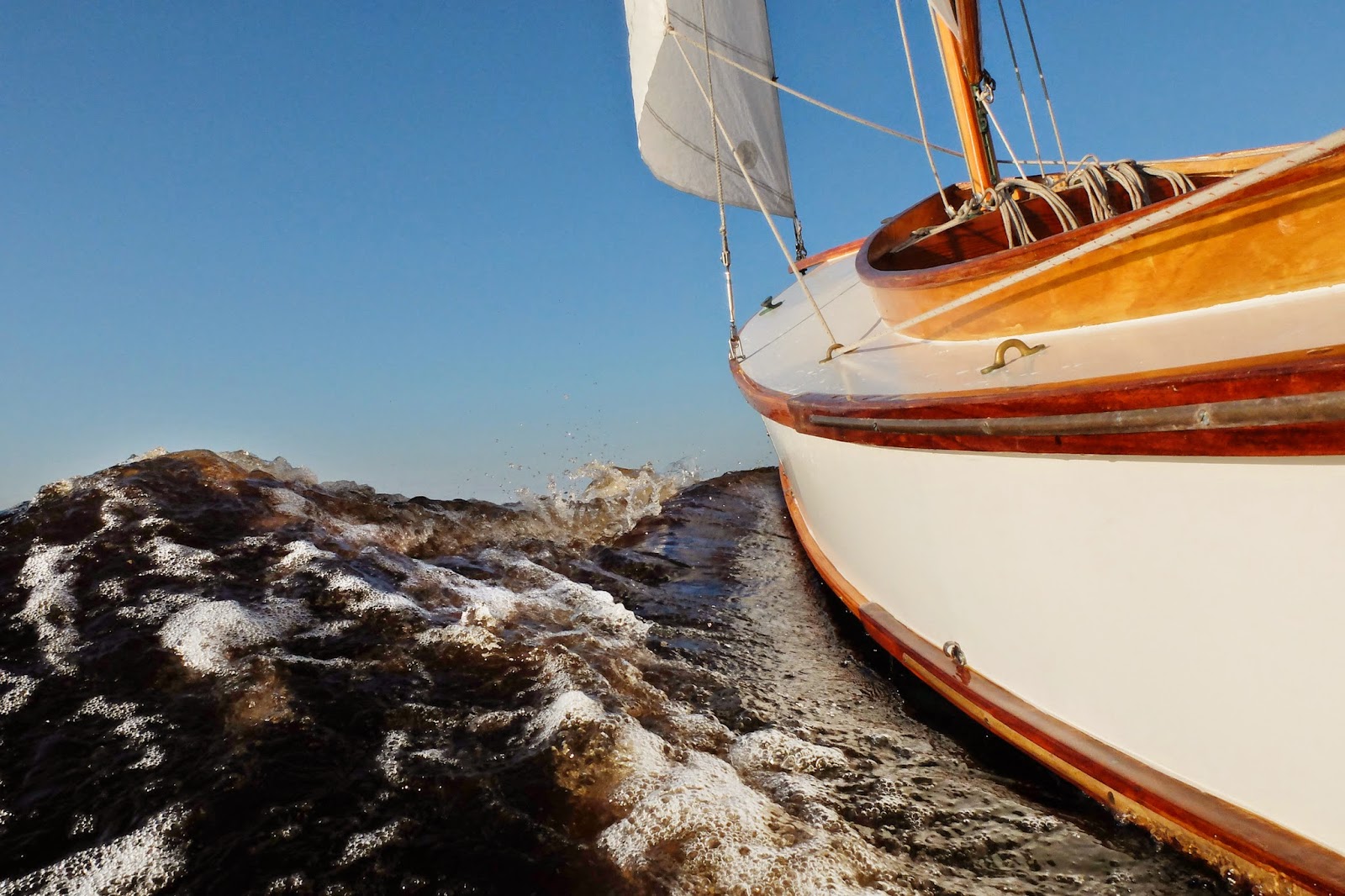 The marked channel heads due south then west.  With the wind behind us we cut across a spoil area and at Newport News Point we enter the narrowing section of the Alligator River that heads west.  The wind, blowing off the land to the north, feels warm.  Making 4.5 knots with wind on the beam we leave the channel and sail through some cruisers anchored in a wide bend in the river.  No signs of life this morning.  Farther west, past the crabber working his pots, is a smaller sloop, maybe 28 feet in length.  A man waves from the cockpit. 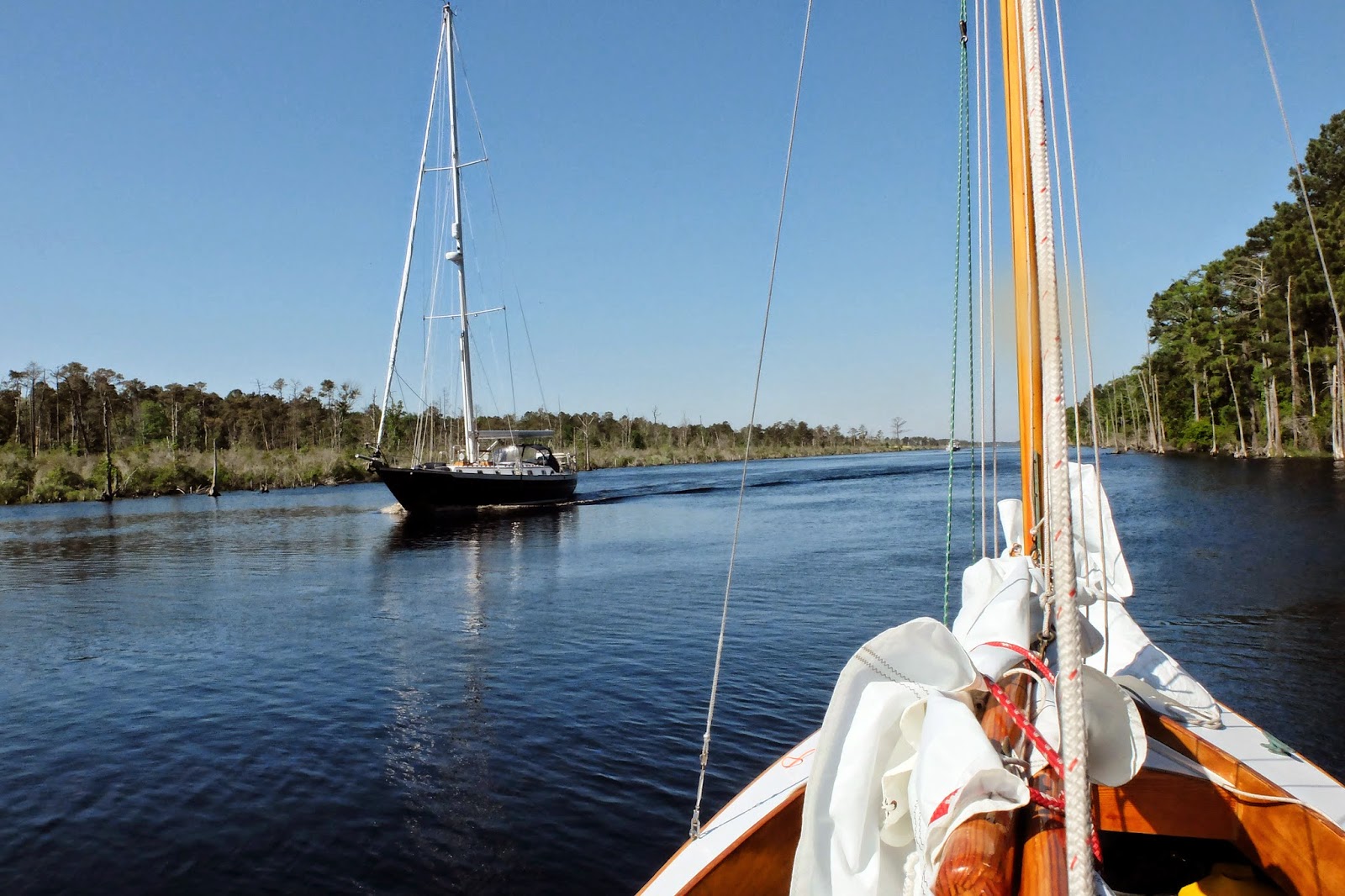 At 8:50 we enter the canal.  Tall trees on the north side block the wind so we round up to drop the sail.  Drifting to the edge of the canal there is a solid "thunk" as Spartina's steel cb hits a submerged tree stump.  With the outboard we back off.  I bring down main and jib, we motor along at just under 5 knots.  I put the solar panel on the foredeck to charge a camera battery.

Three cruising sailboats pass by headed north on the canal.  Everyone waves.  I look ahead to see large power boats headed my way, traveling fast enough to throw large wakes that turn into breaking waves on both sides of the canal.  A hundred yards away the first boat slows down.  As we pass I take off my hat to give a wave of thanks.  The captain points at Spartina and gives a thumbs up.  It is the same with the next couple of boats, yacht slows down, wave of thanks and a compliment for Spartina.  The next boat, black and looking like a space ship, slows down too.  I want to get ahead of the curve so I wave my hat in thanks, point at the million+ dollar yacht and give a thumbs up.  The captain points to Spartina and gives me a Hawaiin "hang loose" sign.  I smile. 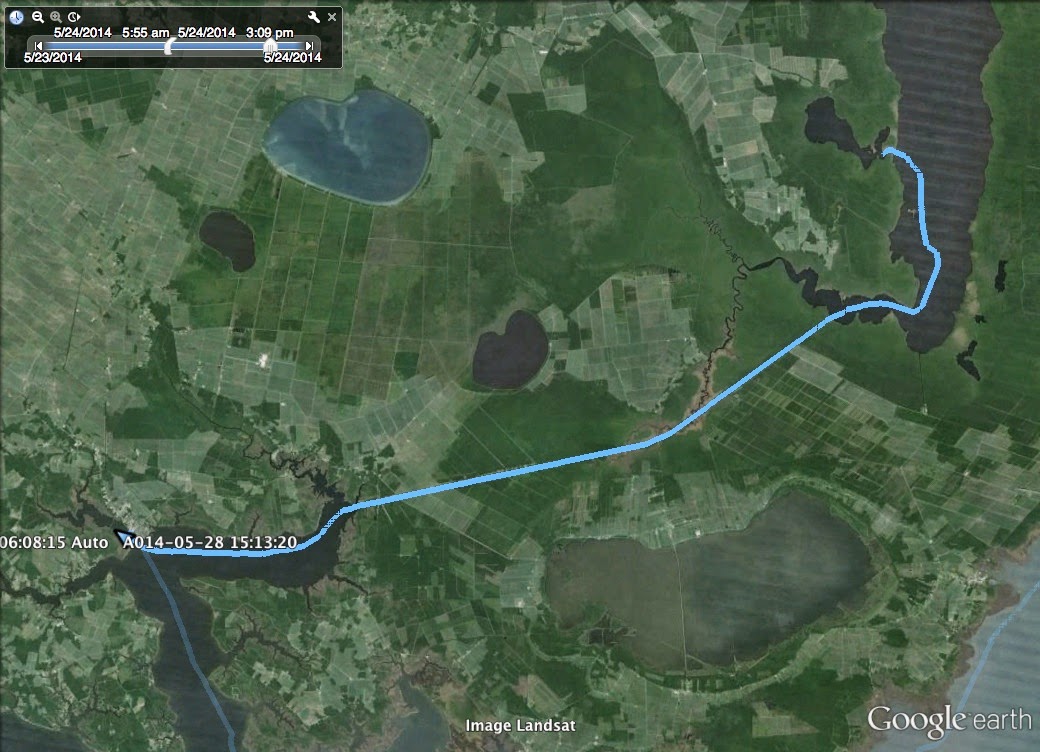 The canal is lined by rich green trees and vines.  I enjoy motoring along, standing with legs on either side of the tiller and steering with my knees.

About a third of the way down the canal it crosses the narrow, winding beginnings of the Alligator River.  Trees disappear and I look north across a savanna of marsh grass.  A few hundred yards later the shoreline is again lined with trees.  Another loud "thunk" as we hit a log floating in the middle of the canal. 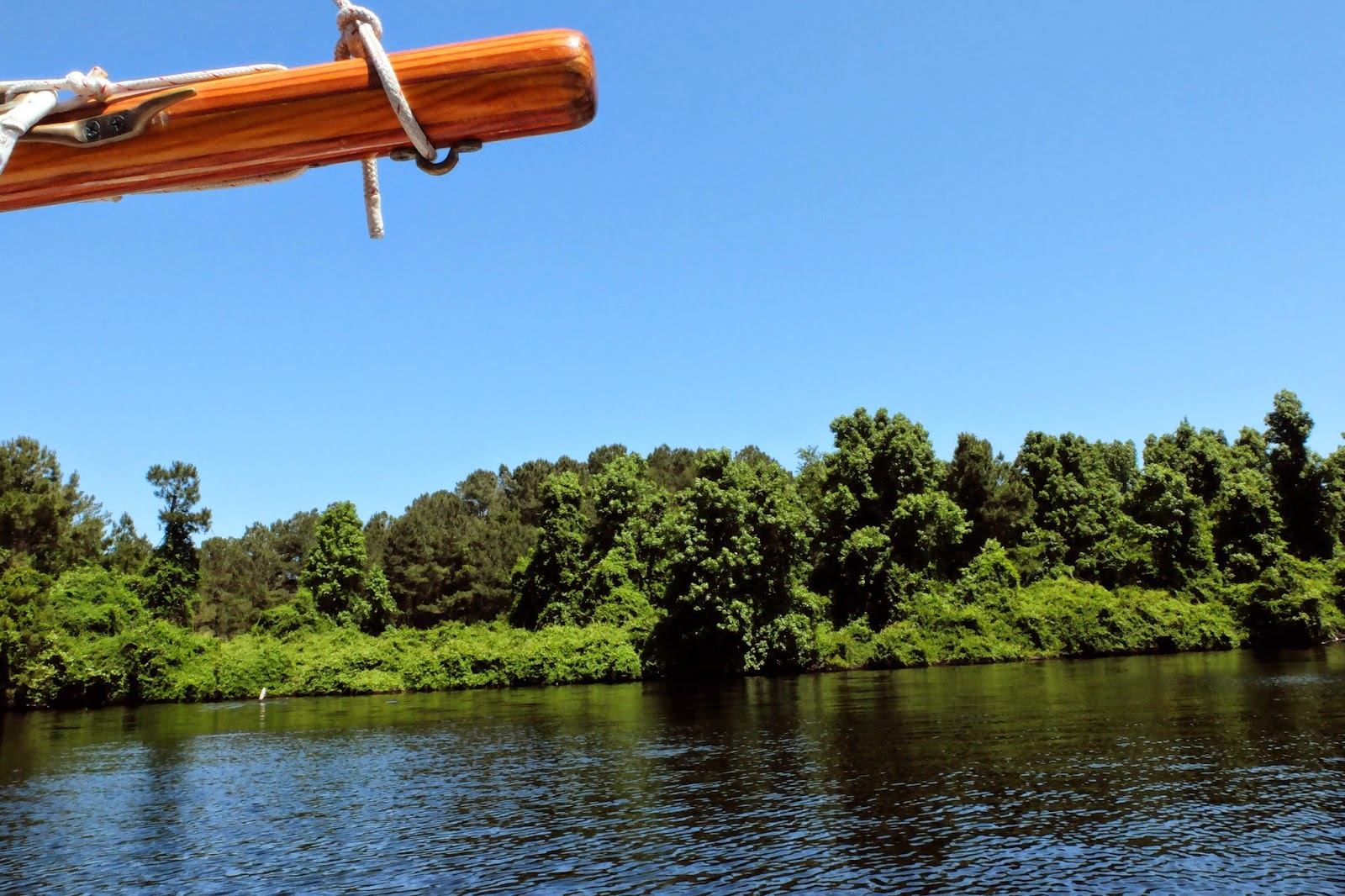 About 12:30 we pass beneath a tall bridge, then leave the canal into Wilkerson Creek.  Out of the creek into the Pungo River we round up into a nice NNE wind, raise the main and jib.  Under full sail we make 4.2 knots towards Belhaven, tiny white clouds against a deep blue sky.

At 1:50 the Belhaven water tower is in sight, an hour later sleek grey dolphins pass by Spartina outside of the breakwater.  By 3:00 we are tied to the town dock.  I plan to walk to the gas station, but Ron and his son Ronald jr say it is too far and offer a ride in their golf cart.  It is too far, the nearer of the two gas stations being closed for the day, the open station more than twice as far away.  At the gas station - I needed less that a quart of gas - I offer to buy drinks for Ron and Ronald.  Ron says thanks, but no, it's not necessary.  They drop me off at the docks and leave with a friendly wave. 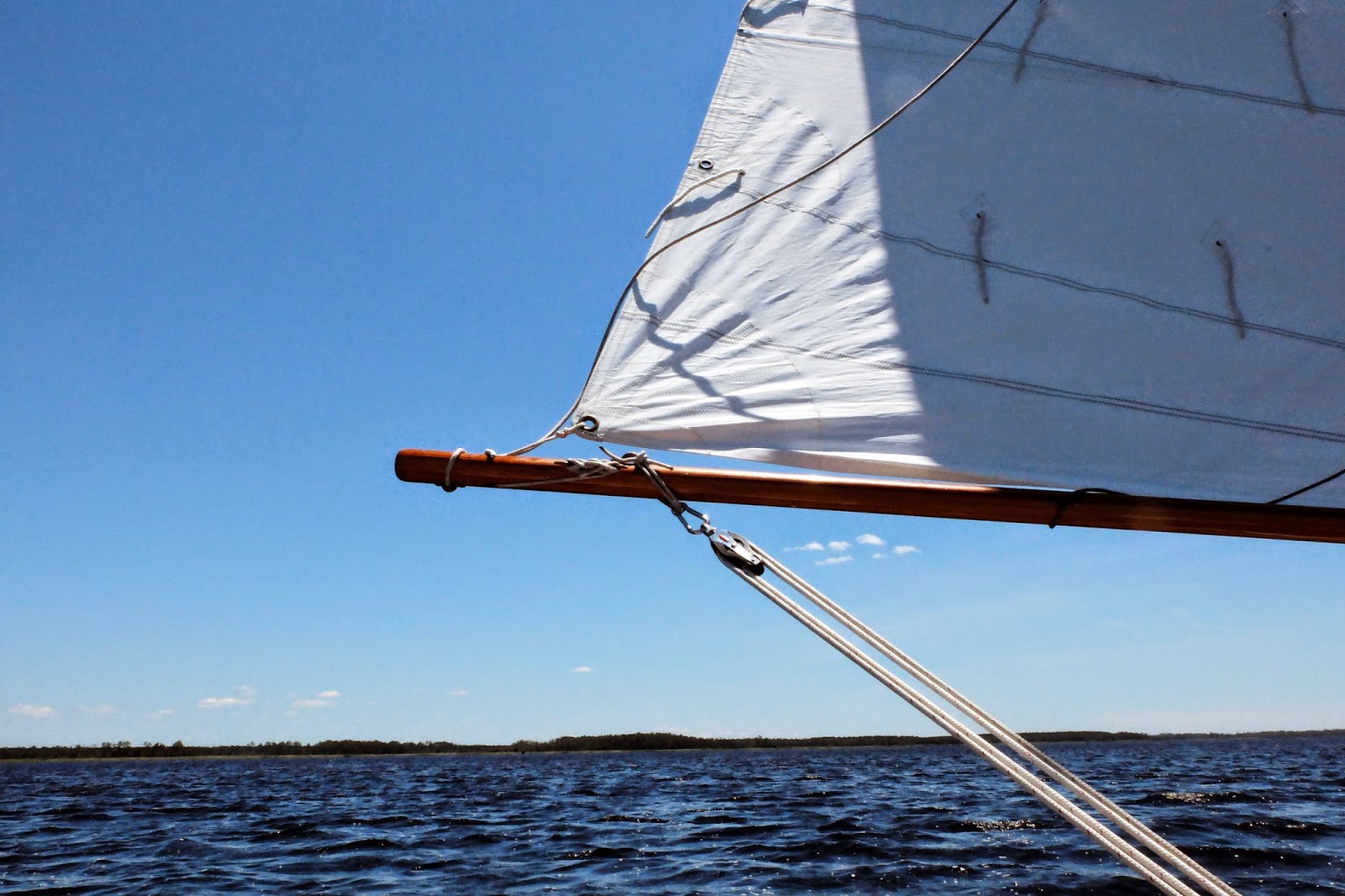 I walk around Belhaven, quiet and hot on a Saturday afternoon of a holiday weekend.  I visit a couple of shops, sit on a bench and relax.  At 5:00 Fish Hooks Cafe opens and I enjoy crab cakes for dinner.  For a quiet town the restaurant is surprisingly busy.  The waitress serving the tables next to mine walks like a soldier, stomping back and forth.  I read my book, enjoy the air conditioning and have another glass of iced tea. 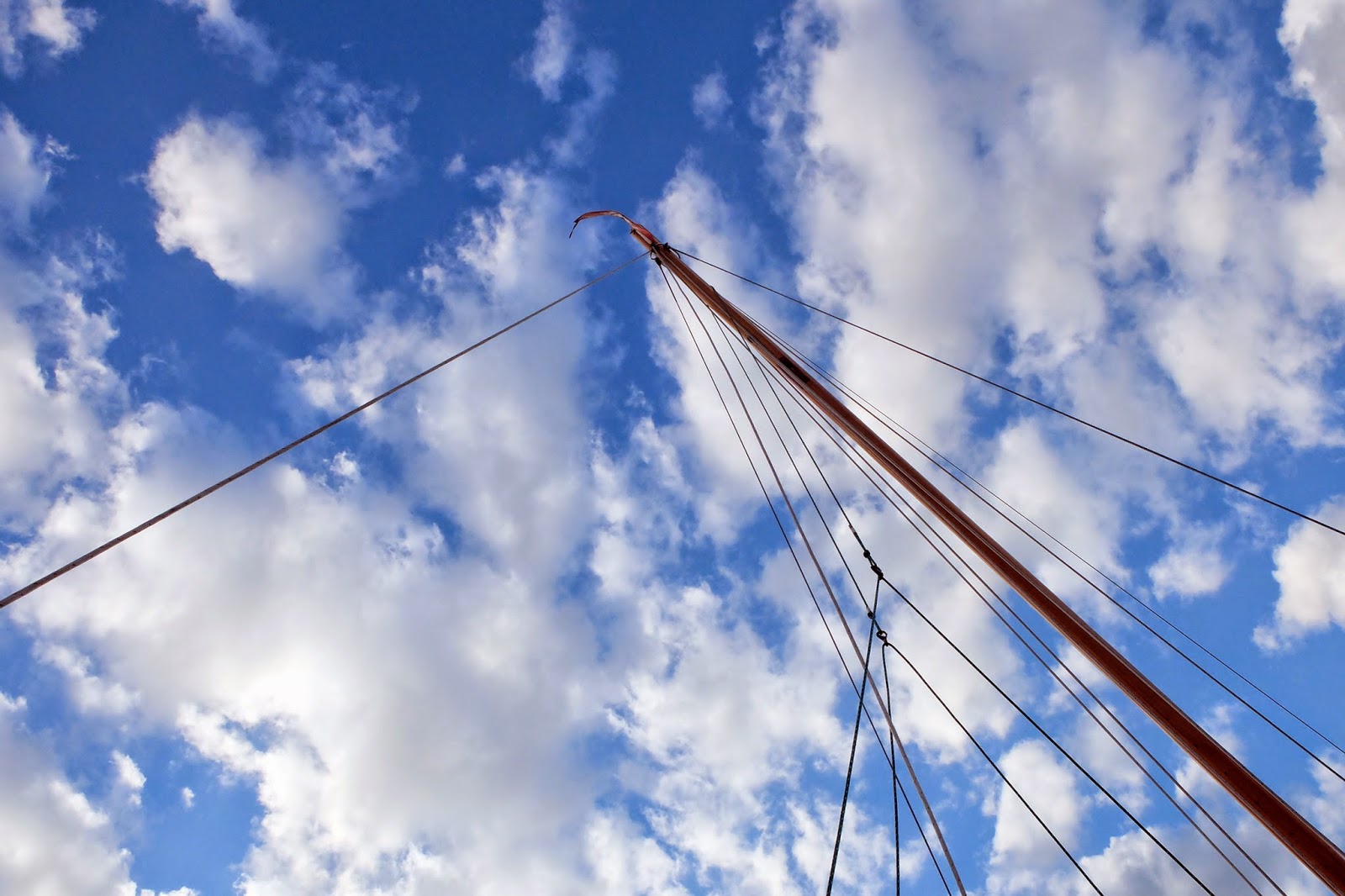 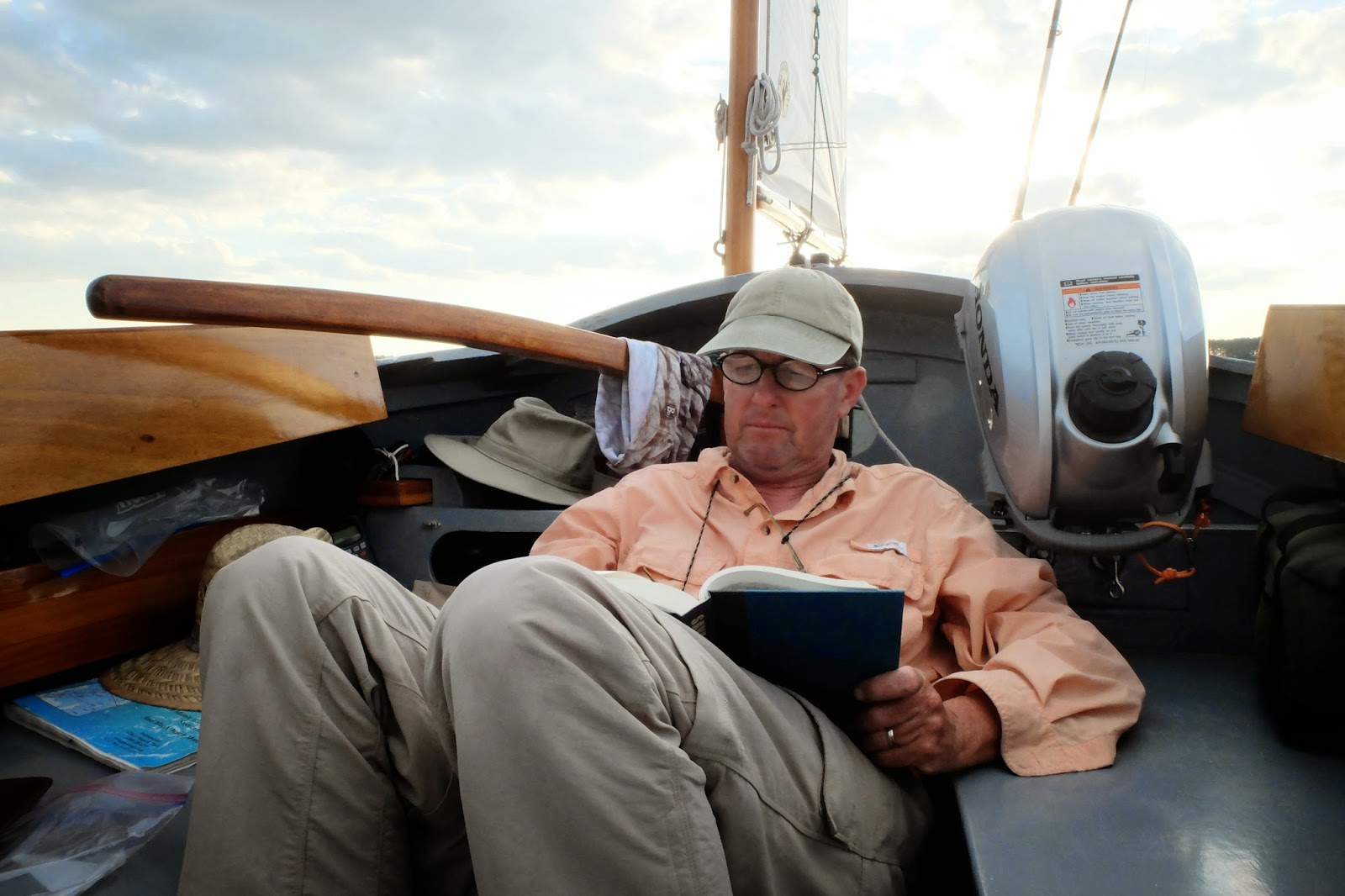 I hear music coming across the river.  A crowd is arriving at Farm Boys, an open air restaurant just off the water, to celebrate the holiday weekend.  Maybe the town isn't as quiet as I had thought