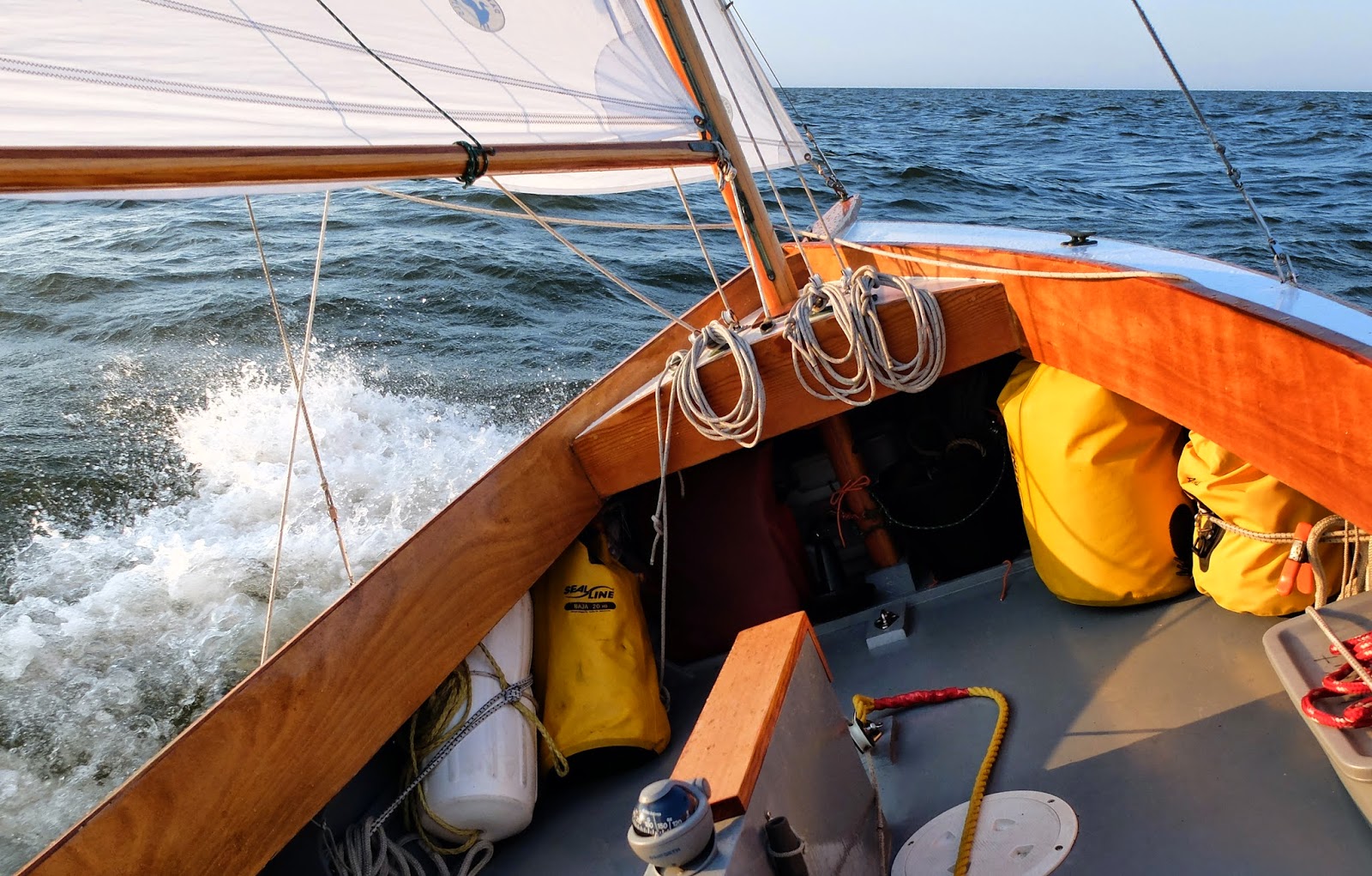 The mainsail gaff is peaked high, the main and jib sheets pulled taught, the sun not yet showing on the horizon.  A strong and steady WSW wind, we fall off to round the point that had protected us from the swell overnight.  To the south is the Bluff Point shoal marker, and the water is rough on the back side of the shoal.  We round up to slip on foul weather pants.  Clear skies and 5.8 knots with wind on the beam.  It doesn't take too long and there is just a thin line of trees to the stern.  Ahead the sun glares on the water with the silhouette of a ferry moving east to west.  So far on the trip I had been sailing on rich brown water coming from the swamps and marshes, now we're sailing blue green water with white spray leaping to port. 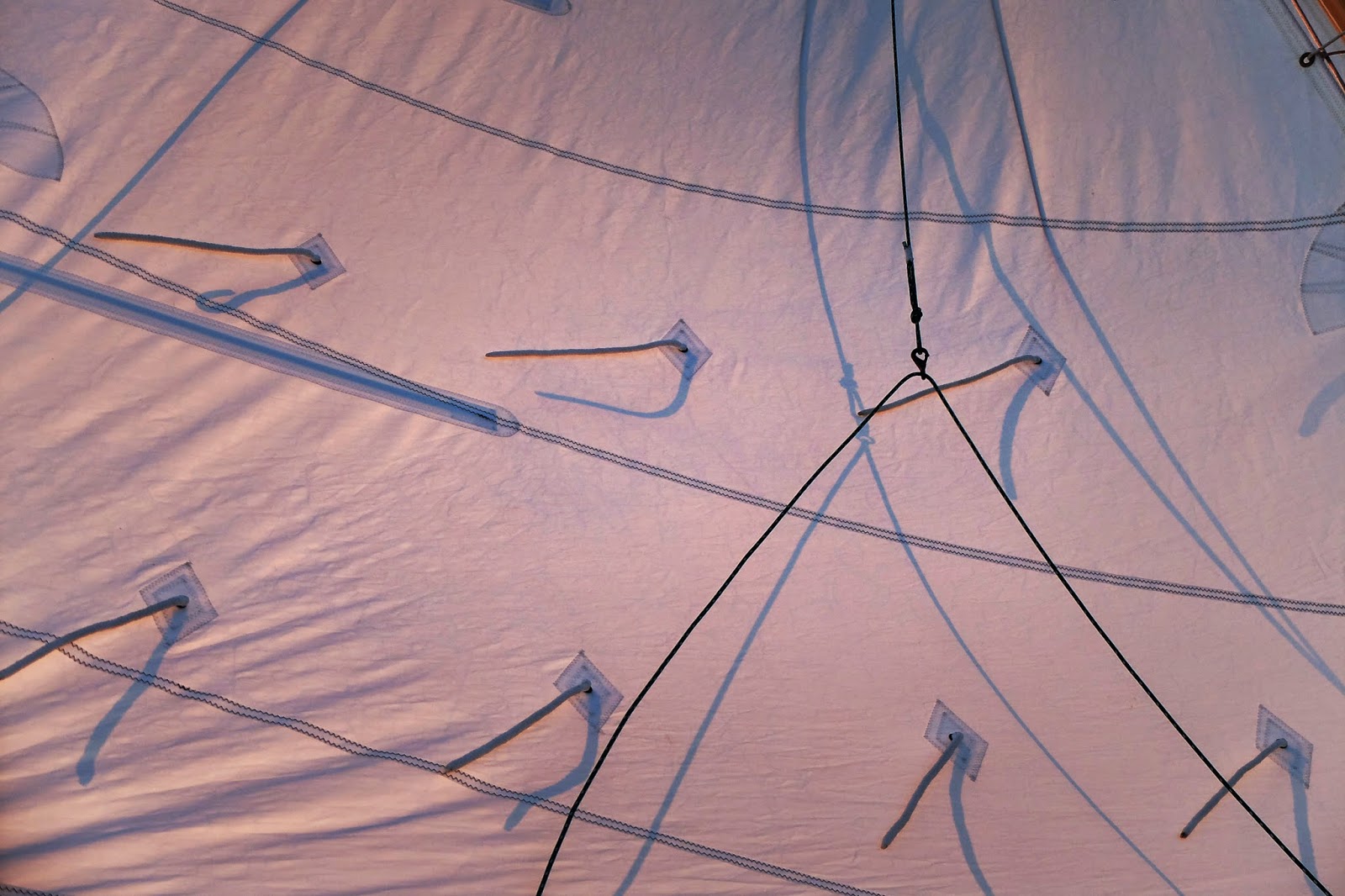 Patches of clouds hang over Hatteras Island to the east, clear to the south and west.  It is steady sailing and I'm living a long-held dream of crossing Pamlico Sound.  I point up a little higher than needed, preferring to come in high and fall off once I see the Ocracoke's channel markers.  A cup a fruit, granola bar and a few sips of water.  Cool and comfortable, I could not ask for a better day.  Spartina moves along at 5.5 to 6 knots. 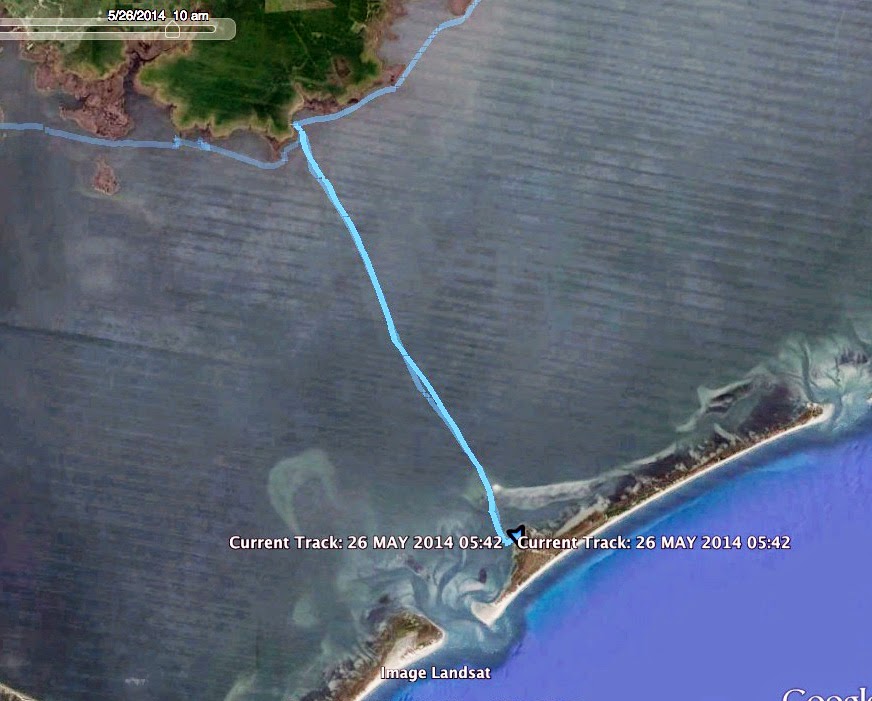 The trees to stern have disappeared.  Ahead I see a marker, and nothing else but water.  I look at my charts, zoom in and out on the gps, realizing the marker is the Lower Middle Ground Light.  I see on the charts that it is about two-thirds the way across the sound.  I glance up at the marker, look to the left and I am surprised to see the water towers and antennas of Ocracoke.  We fall off and head towards the island.  It is only 7:30. 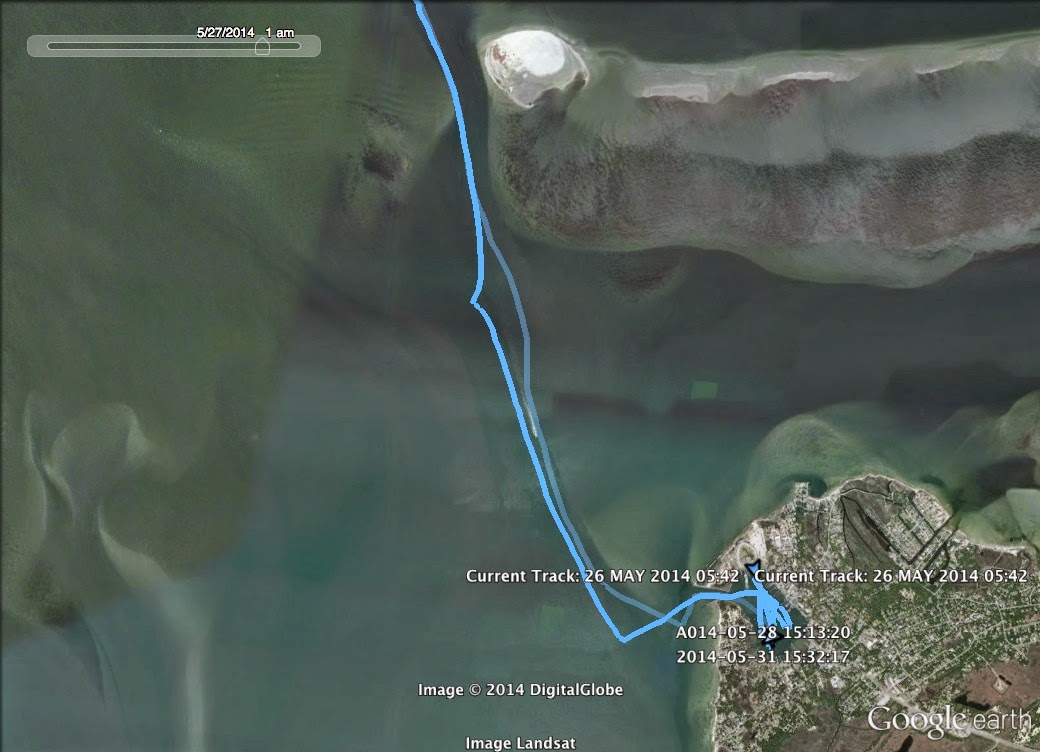 Soon the 75-foot-tall 1823 lighthouse shows on the horizon..  A few minutes later I pick out the the entrance markers.  Blue skies and rolling waves out of the SW.  In the channel a little after 8:30, a line of sailboats heads out at the end of a holiday weekend.  Lots of waves and smiles.  Passing the spoil island at the south end of Howard's Reef I look aft and see a ferry entering the channel behind me.  To starboard the mast of a sunken sailboat juts at an angle out of the water.  The ferry, Carteret, is coming fast on our stern.  I hail them on channel 13, saying I'll move to the side them let them pass.  The captain comes back, says "hang to the green side" and I realize I should have been more specific.  The charts show plenty of water so we slide to starboard as the ferry slips by. 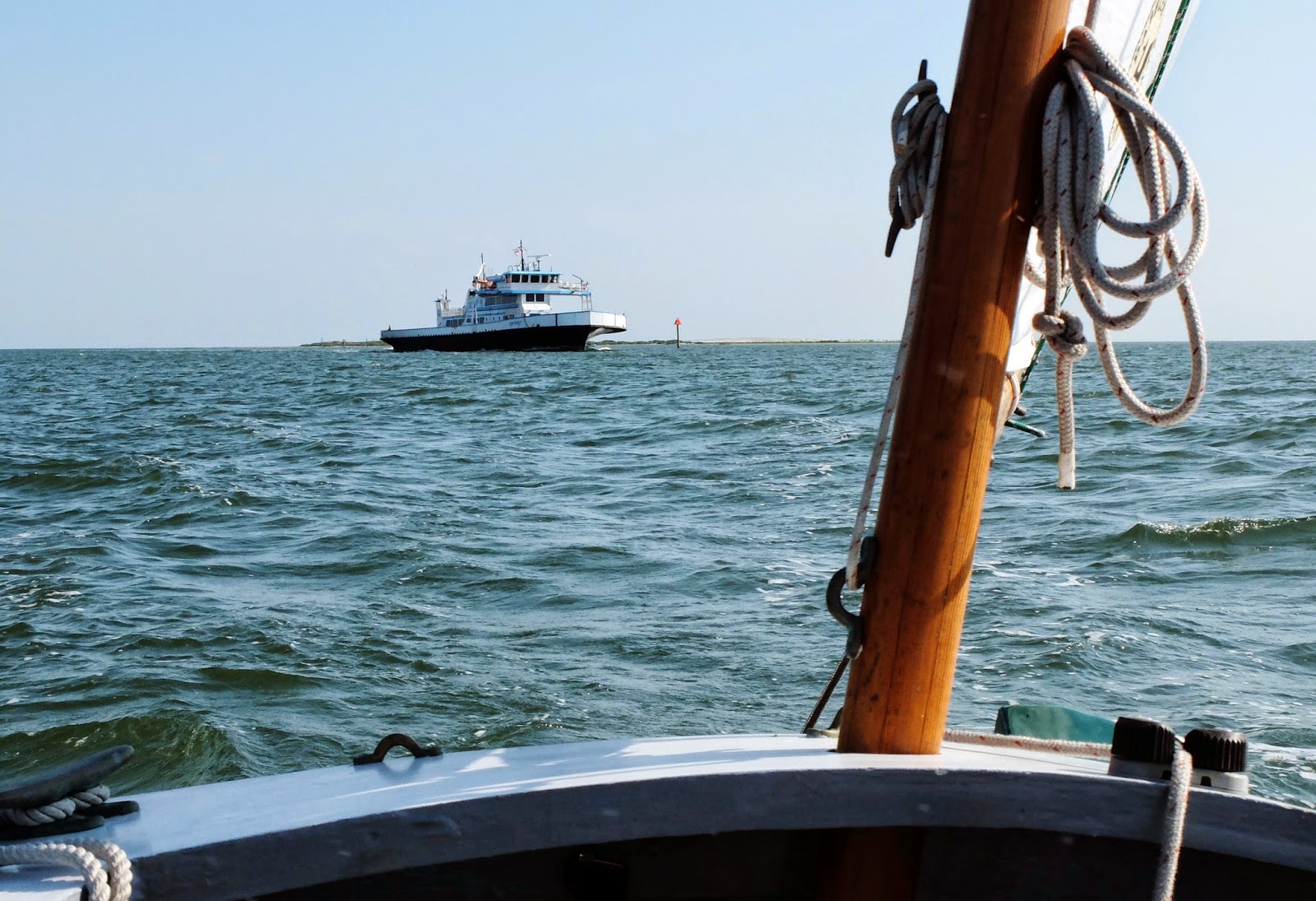 We are off Springer's Point, Blackbeard's old hang out, a little after 9:00, jibing toward the entrance to Silver Lake.  At the jetties wing and wing, sailing through the entrance, past the ferry docks and into the harbor.  A dozen or more sailboats are anchored out.  We make a couple of laps of the small harbor, enjoying the perfect wind and blue skies. 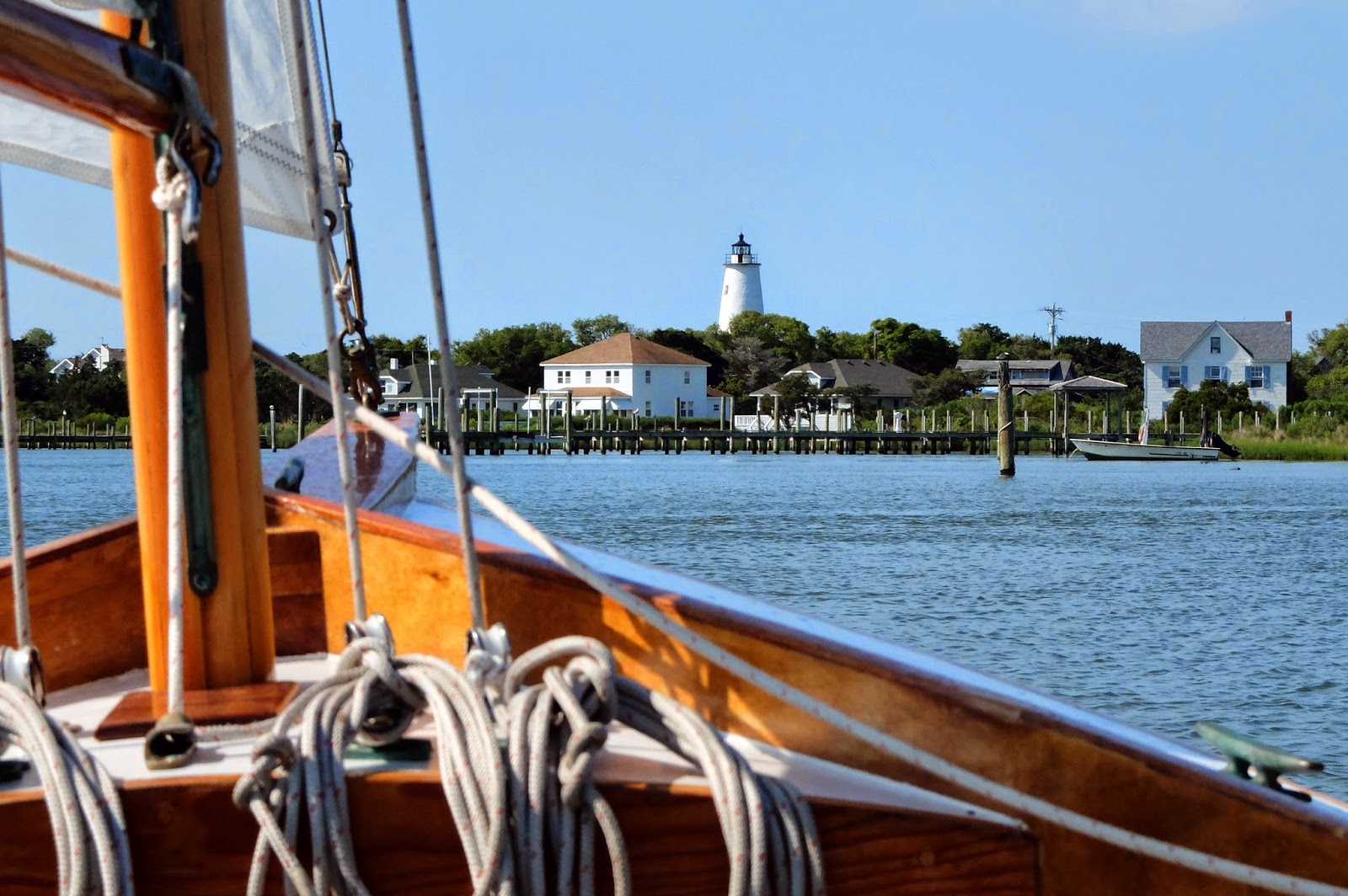 I notice the National Park docks are empty.  Sailing closer I see small "No Docking" signs taped to the pilings.  I tie up anyway, walk to the park service office and ask about the signs.  The docks are being refurbished, I'm told, won't be open for a couple of weeks.  But the ranger says with a boat Spartina's size, I can tie up at the dinghy dock.  We motor about fifty yards, tying up at the small floating dock. 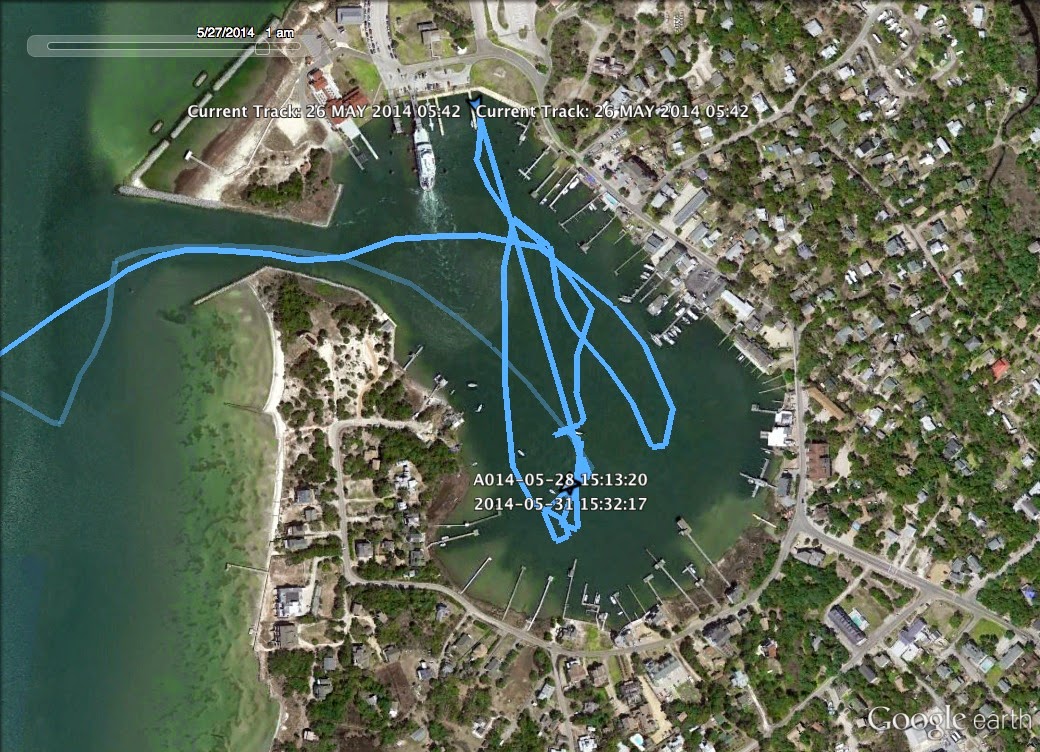 It is a hot day and on the island itself there is no breeze.  I walk around the harbor to a small shop on Community Square to buy an Ocracoke pennant, a long-promised reward to myself for sailing to the island.  The gentleman behind the counter asks if I have a sailboat.  Yes, I do.  What kind?  I tell him a small wooden yawl.  "Was that you out on the harbor this morning?" 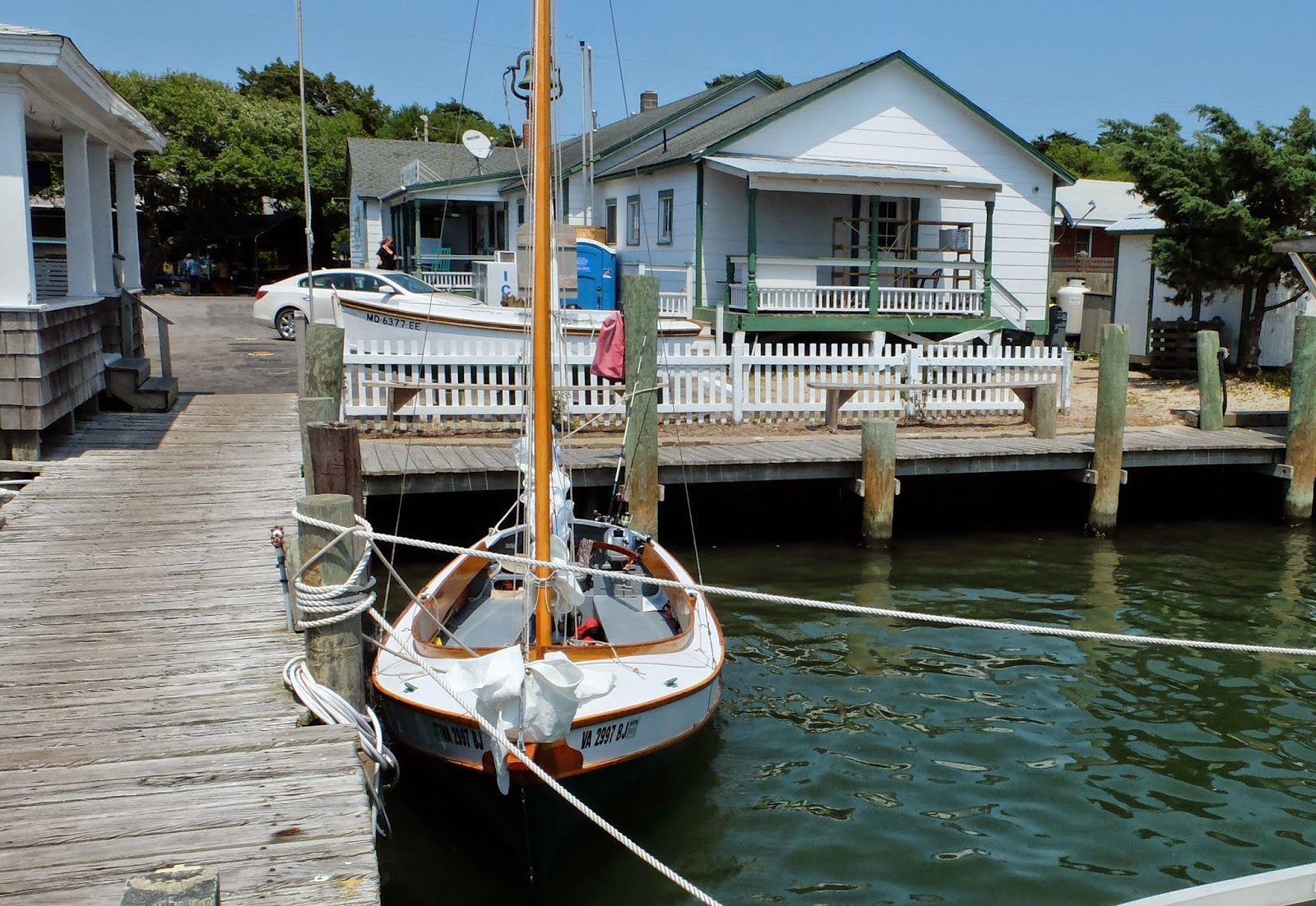 It was Rob Temple, who runs charters on both his schooner Windfall and the skipjack Wilma Lee.  I had sailed with him years before, taking the family out on his schooner for evening sails.  He of course didn't remember me.  But he did have a lot of questions about Spartina and the trip.  And he extended the island's hospitality to me.  "Whatever you need just let me know."

Soon Spartina is tied up next to his shop.  He loans me his golf cart to run errands.  And we sit on his shaded porch on the hot afternoon, drinking iced tea and talking with about sailing on North Carolina's waters.

The hospitality doesn't end there.  The young couple who had just re-opened the Community Story, offer to sell me water at a discount (I decline and pay full fare).  And then there was Philip Howard, with a long line of ancestors going back generations to Blackbeard's crew, dropping by to say hello, offering his car to help with errands.  And Bud, who reads the blog and recognized Spartina on the harbor, coming by to visit.  And the dockmaster who said Spartina can tie up there anytime.  It is really a great afternoon with some very friendly and interesting people. 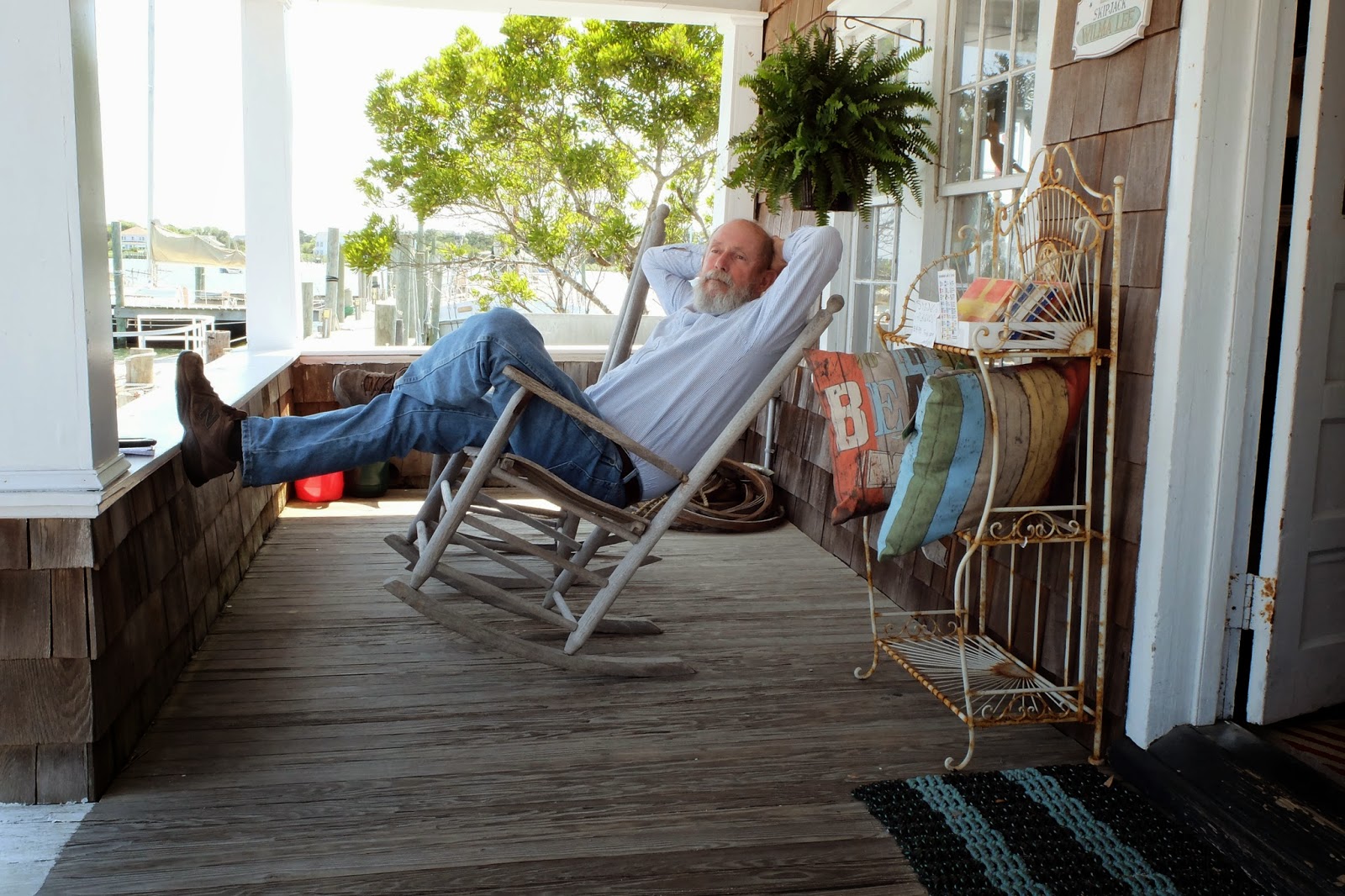 Mid-afternoon, with a building SW wind, we leave the dock and anchor in a few feet of water in the eastern corner of Silver Lake.  A relaxing swim and the chance to scrub the beginnings of barnacles off of Spartina's hull.  Fisherman coming in on skiffs motor by and say hello. 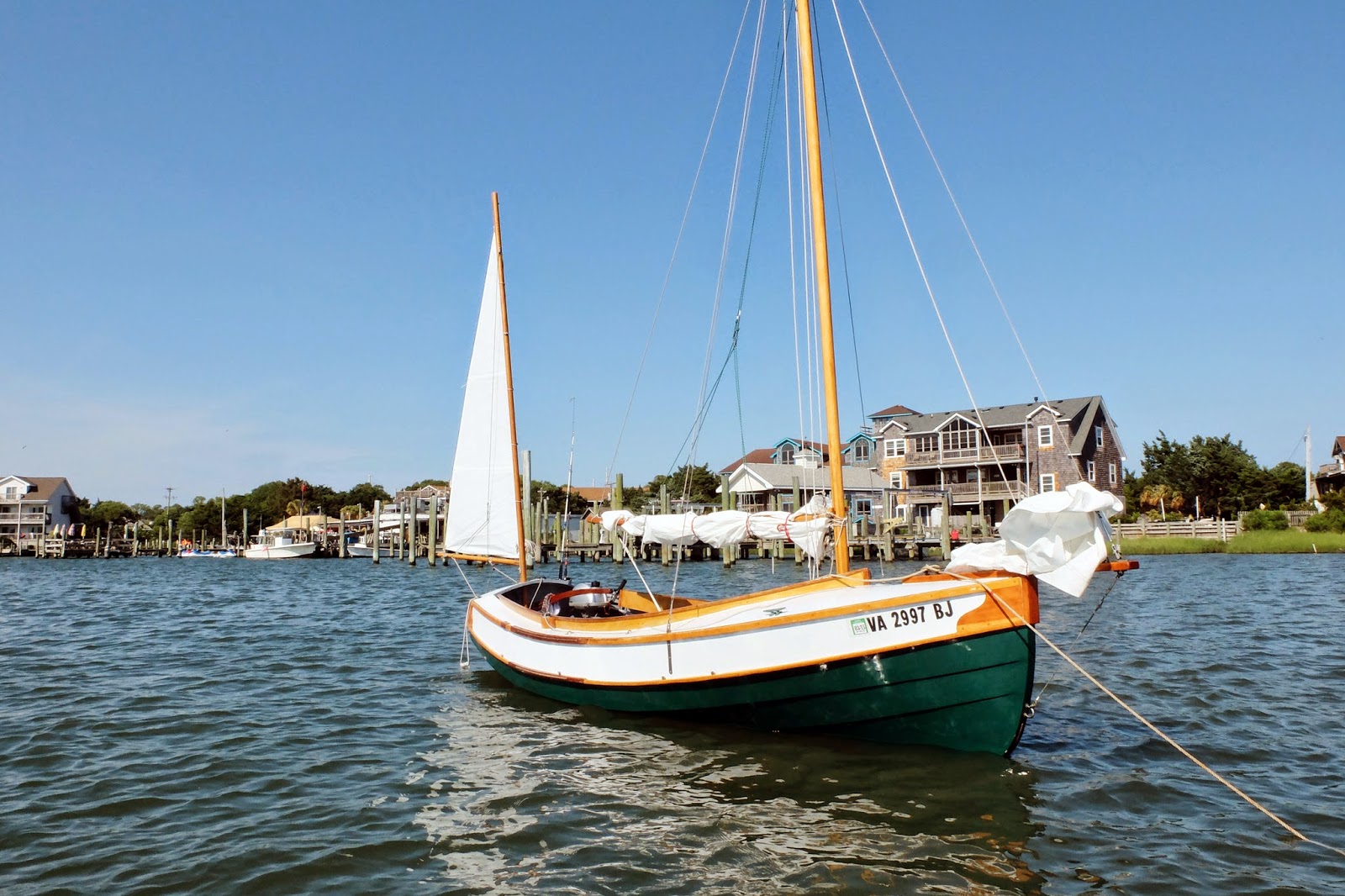 Early evening we move to deeper water near the lighthouse.  Dinner and reading, and listening to weather radio with reports of small craft warnings - 20 to 25 mph winds, two to three foot waves - the next day.

Evening fades with hints of pink and purple in the clouds.  The lighthouse turns orange from the setting sun, the beacon shines bright.  And I'm happy to be anchored in the little harbor of a little island that sits on the far side of Pamlico Sound.

I slip into the bivy and fall asleep. 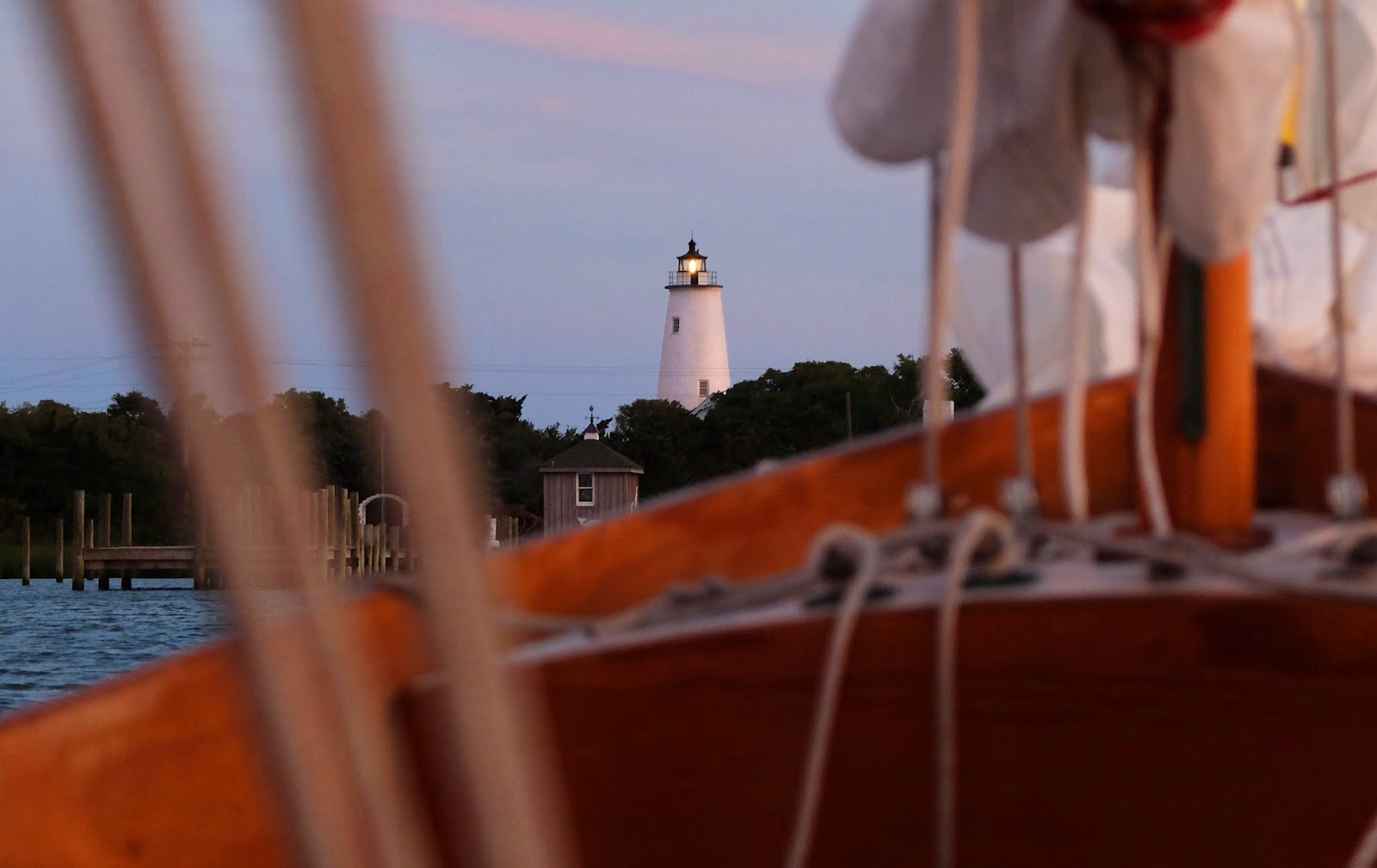 Hey Steve,
unsurprisingly Spartina gets attention wherever she goes.
Reading about your adventures is always inspirational, thank you.

Lorenzo,
you are right, John W's pathfinder design does draw attention. There are times when I think I want to slip in and out of a harbor with no attention, but then again I have met so many nice people along the way. Meeting good, interesting people has become part of the sailing trips.
steve

Your NC readers are at the top of your "site visitors" and likely, word gets around Ocracoke that a familiar sailing Pathfinder is in the neighborhood.

Getting to Ocracoke, and Belhaven are still on my "bucket list". Weather forecasts last week scrapped the trip to Belhaven.

Looking forward to next installment.