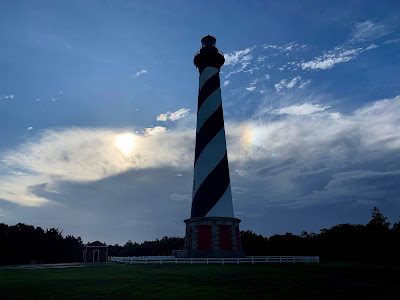 An islander told me this morning that waiting on a hurricane is kind of like being stalked by a turtle.  It's kind of slow and ponderous, always out there and keeping an eye on you.  How true. 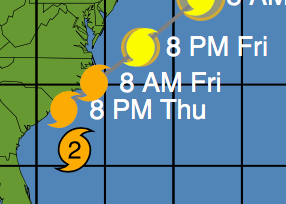 The map is not very encouraging.  The Category 2 (orange) 8 a.m. Friday position is basically over Hatteras Island.  There has been talk of it coming ashore around Morehead City/Beaufort, then heading up the middle of Pamlico Sound.  This is not good. 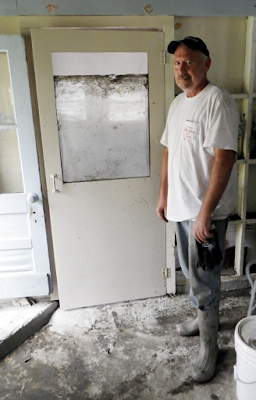 Hurricane Irene followed a similar path a few years ago: landfall west of Cape Lookout and up the middle of Pamlico Sound.  Hurricanes spin counter-clockwise.  The easterly wind at leading edge of the storm pushed the Sound waters so far to the west that people were walking out into the sound from Hatteras Island, picking up fish and clams along the way.  The western side of the sound, including Hobucken, was underwater (you can see the high water mark on the window just to the left of Shawn at Pate's Boat Yard, above). 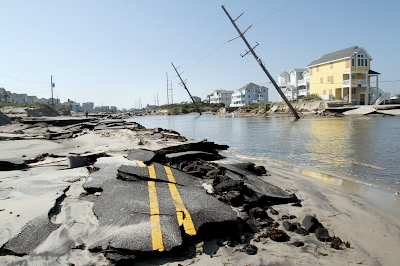 On the back side of the storm the wind swung to a westerly, pushing all that piled up water east.....with a vengeance.  The returning water breached the island in two places and flooded most of the villages.  Above is the north end of Rodanthe, the sourthernmost breach.  I recall my boss at the time telling me to come home as soon as the sand was cleared from road.  I explained to him that there was no road. 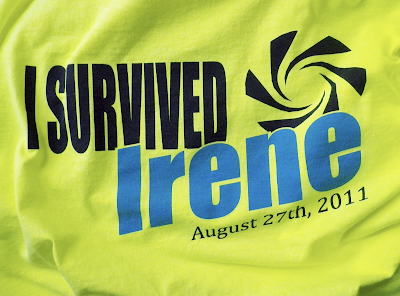 Storm paths can and do change.  We are in a safe place, a solid hotel on one of the three ridges in Buxton.  We'll just have to wait and see what tomorrow morning brings us.  I got a tee-shirt from the earlier storm.  Maybe I'll get one here too.

Wishing you and everyone out there all the best. Finally gained a forward motion of 10 mph (NE) after crawling along all day. I'll be glad when this one is gone but I'll bet you'll get some good photos.