With the boat rigged and fully loaded I hop into Spartina, still on the trailer, in the parking lot of Somers Cove Marina.  A few things still need to be tucked away but I want to listen to the weather forecast.  I turn on my West Marine VHF 150 radio and tune to channel two.  Nothing but static.  I try to the two other weather channels, one and three, still nothing but static.  I adjust the squelch again on channel two and hear a faint, barely recognizable forecast mixed in with the static.  I'm not even on the water and have my first equipment failure.
I open the aft open the deck plate on the aft cockpit hatch and pull out the small orange Sea to Summit waterproof bag.  Inside are my spare vhf radio and gps.  I put the AA batteries into the spare radio, a ten-year-old vhf that had died and was revived with an $85 repair bill, and turn it on.  The crystal clear automated weather voice gives me the forecast.  NE wind at five knots, showers and thunderstorms.  Looking out at the glassy calm water of Somers Cove I wondered if the wind forecast was optimistic. 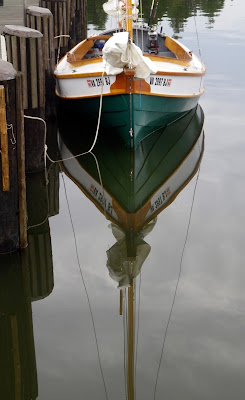 Just after 10 a.m. I start the outboard, push away from the dock.  I raise the mizzen motoring away from the dock.  Then the main and the jib.  I drift aimlessly for a couple of minutes, then catch the hint a breeze out of the NE.  I jibe and turn toward the narrow entrance to the cove.

The breeze picks up nicely as I sail downwind through the entrance, a crab house to port and condos to starboard.  A man and a woman wave from the balcony of a condo.  Across the way a man sings loudly and off key at the crab house, his voice booming out from under the metal roof along the waterfront.  Bushel baskets for the crabs are stacked high in front of the cinder block building, a sign nailed up on a post has hand-written prices for crabs brought in that day.  The wind falters between the buildings, Spartina's momentum and the tide carry her out to open water.  We catch the wind once again. 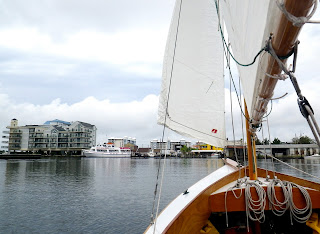 Late morning the breeze fills in nicely, Spartina sails west on the Little Annemessex River south of Janes Island.    We pass the tall chimney stack that sits out on the sand spit at Old House Cove, head for Island Point at the edge of Tangier Sound.  Sailing in the shallow water next to the spit the trolling rod bends with soft, elusive hits. I try to set the hook but the fish is gone.

The water is choppy at Island Point, the wind drops off and we sail at just over two knots under a dark grey sky.  The wind falls off even more and I start the outboard.  I can see the low line of trees on Smith Island to the west across Tangier Sound.  A light rain begins to fall.  We motor sail, more motoring then sailing, across the sound.  The water is calmer as we move away from the shallows.  I head NW towards Terrapin Sand at the NE corner of Martin National Wildlife Refuge, the marsh covered north end of Smith Island.  I look over the charts but cannot decide where I would like to anchor for the night. 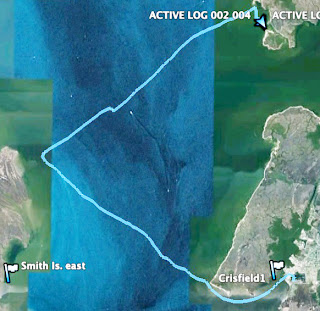 Approaching Smith Island I get another hit on the trolling rod.  It is a soft hit and it makes me wonder if the bluefish have just been biting at the rubber grub on the "stinger" hook that is trailed a few inches behind the main lure.  I reel in the lures to find that the tail of the grub has been bitten off and even the remaining part of the grub has slashes from bluefish strikes.  I remove the stinger hook completely and put out the lure, a floating/diving minnow, by itself. 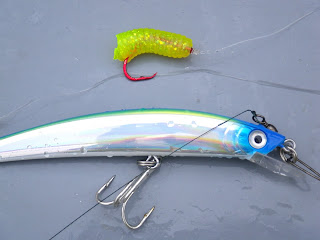 Early afternoon, still under a light rain, Spartina is just off shore of the refuge.  Black Cove, an excellent anchorage, is right around the corner.  But it is too early in the day to stop.  While trying to decide where to go the breeze fills in from the east.  Looking over the chart I see that Hazard Cove, near the village of Frenchtown, would put me in place to reach Deal Island the following morning.  I turn NE to sail back across Tangier Sound.  The wind picks up and we sail comfortably at over three knots.  I'm happy to listen to a college football game on the radio instead of the outboard motor.  The rain stops, the dark clouds lift and the skies brighten. 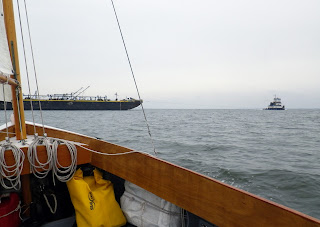 At 2 pm I look to the west to see a tug with a tow entering the sound through Kedges Strait.  Still a couple of miles away from me, the tug seems to be heading in my direction.  I turn on the radio to contact the captain on channel 13.  I identify myself and ask where he is going.  "Up Chesapeake Bay" he says brusquely.  This strikes me as a flip response as he has left the bay and is heading east on to Tangier Sound.  Maybe he is not taking me seriously.  I ask if sees me, the small sailboat in front of him.  I tell him I want to know if my path is ok, or if I should alter my course to avoid him.  Yes, he sees me and my course is fine.  After some static I hear him say "cross my bow."  I continue on my course, all the while concerned that our paths will intersect at some point.

Soon the captain is on the radio telling me to alter my course.  "Don't you cross my bow" he says "it's not worth it".  "I thought this is what you told me to do" I radio back.  Apparently the word "don't" was lost in the static.  No harm done as I came about and let the tug pass, we were never closer than a few of hundred yards from each other.

As the tug and tow powered by I thought about our miscommunication.  I had done two things correctly.  I had contacted the captain and I had left my radio on, tuned to channel 13, so he could contact me.  What I did not do, but should have done, was repeat the captain's instructions back to him.  Had I done so we would have discovered, and resolved, the misunderstanding immediately.  Another lesson learned. 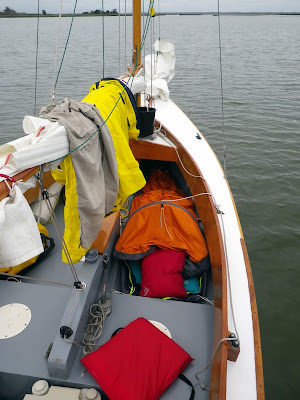 Shortly after 3 pm we approach Hazard Island.  The wind falls off and we sail slowly, gently into the cove.  Light rain falls as I drop the anchor over the side.  It lasts for for about 15 minutes, I use the water to sponge the decks of Spartina clean.  The rain stops and I hang up my gear on the boom to dry.  Tired from starting my day at five in the morning, I opt for a simple dinner - grilled slices of potato and a cup of fruit.

After dinner I clean up, set up the sleeping gear and fill out my notebook for the day.  With heavy dark clouds all around I am not surprised to hear the forecast for tomorrow: fog, rain showers, possible thunderstorms.  Winds of five knots or less.  A mass of moist air is sitting over Chesapeake Bay and much of the mid-Atlantic.

I relax and enjoy the clouds. 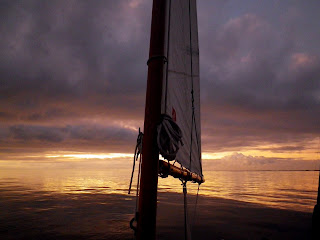 Wonderful narrative Steve and love the pic of Spartina and her reflection at Somers Cove. I was fascinated by your description changing out your fishing lure. Never occurred to me that you could tell what kind of fish had been nibbling just by what it nibbled at and the marks it left. Makes sense that an experienced fisherman would know but it's something that I'd never thought about.

MaryLou,
I'm very experienced at not catching fish. Once in a while one ends up on the hook. Stripers inhale the bait, bluefish slash at it with sharp teeth. It is easy to make a decent guess when the lure has slash mark on it.
Was just talking to a friend last night about downrigging weekend. Can't wait. Hope to see you then.
steve