Drops of water splash my face in the early morning hours.  A light rain is passing over, water slips through the mosquito netting of the bivy.  I unzip the netting and release the flap that cover the top of the bivy to protect me from the rain.  I feel like I am sleeping in a shoe.
The light rain turns to a steady drizzle and I fall back to sleep. 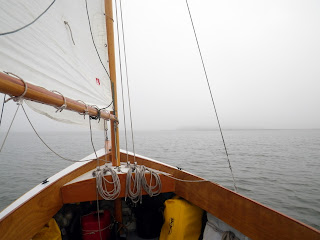 I wake up later than usual, a little past dawn.  Even if I had been up before dawn I would not have seen it.  A light fog surrounds Spartina.  I am dry inside my sleeping bag inside the bivy.  Everything outside the bivy is wet.  I dress quickly keeping my feet on the dry bivy, then sponge out the boat.  The bottom of my sleeping pad and the bivy are wet.  I roll them up and tuck them under the foredeck.  The sleeping bag is a little damp in one corner but I put it away in the stuff sac anyway, hoping that I'll be able to dry it later in the day.

There is a light breeze out of the east.  I raise the sails and haul in the anchor.  Away from the fog covered shoreline the breeze picks up and we are sailing at four and then five knots.  In the haze I can see the houses of Frenchtown and Rumbley sliding by, then Prickly Point falls off to the stern as we cross the mouth of the Manokin River heading for Deal Island. 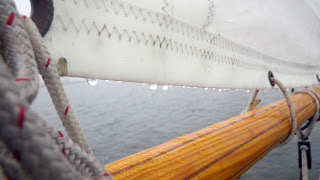 By 8 a.m. I can pick out the shadow of Little Deal Island in the fog.  The wind holds steady and we make good time on very calm water.  It is quiet.  Watermen, and their rumbling diesel engines, take Sunday mornings off. 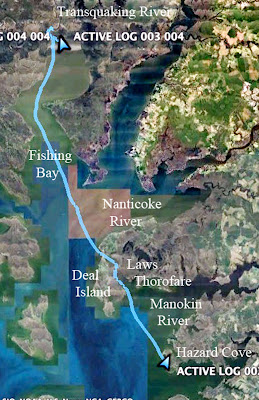 I bear to starboard approaching Little Deal Island, soon picking out Shark Point to the north.  I pass just 20 yards off of the marshy point and turn north into the wide, shallow opening in the marsh that leads to the Laws Thorofare.  I look north and see nothing but a solid line of marsh grass.  The thorofare that runs behind Deal Island is up there somewhere but I don't see it.  Soon a small boat speeds out of the marsh showing me the way.  Local boats can be great aids to navigation. 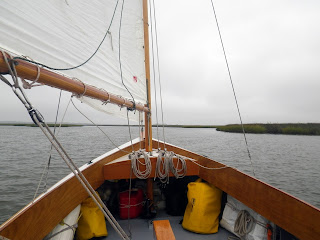 I enter the marsh heading NW and then turn N as the channel narrows.  The tide is running and I see eddies in the channel as water spills out of the small guts in the marsh.  The thorofare then turns east directly into the wind.  With sails still raised I reach back and start up the outboard with just a single pull on the starter cord.  After a few minutes under power the channel bears NW into the Upper Thorofare, I shut down the outboard and let the sails catch the wind.  The channel widens into a bay that reaches out under a bridge.  To port are some crabs house and old working waterfront marinas.  To the starboard behind a jetty is a modern marina with pleasure boats.  I think about stopping at the marina for a cold drink but decide to keep on sailing.

We pass under the bridge and sail within yards of a jetty where a man is fishing.  I ask him what he catches from the jetty.  "Everything" he says.  "Trout, redfish, flounder and perch."  As I pass by he looks at Spartina's stern.  "No engine on that boat?" he asks.  I have one, I tell him, he just can't see it down in the outboard well.  He smiles and waves. 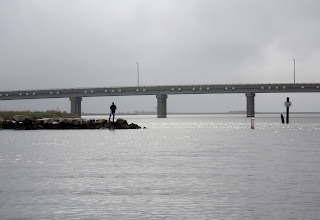 Leaving Deal Island to my stern I can already pick out the 44 foot tower marking Sharkfin Shoal in the distance. Wind out of the east picks up and we move along at 5.3 knots.  The fog is gone but low, grey clouds hide the sun.  The drag on the trolling lines goes off and I reel in a small bluefish.  It is too small to keep and I shake the fish off the hook.

Past Sharkfin Shoal I turn NW towards Fishing Bay.  The sun peeks through the clouds, then disappears.  To the west of Clay Island, over an area marked on the charts as Deep Hole Rock, the clicker on the drag goes off again.  This time I bring is a nice taylor blue, just right for dinner.  I slip the fish on a stringer and drop it back in the water at Spartina's stern. 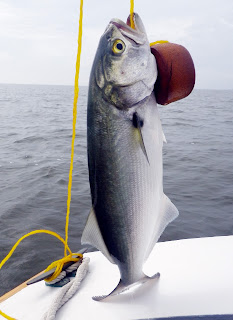 Late morning the wind begins to fall off and we sail at just over two knots.  The skies are getting lighter, I feel the warmth of the sun.  I sneak up forward in the cockpit for a moment to grab the bivy, sleeping pad and sleeping bag out from under the foredeck.  I spread them out in the forward area of the cockpit and over the centerboard trunk to dry.  The wind drops off even more and we are making less than two knots.  The hint of sun feels so good that I do not mind. 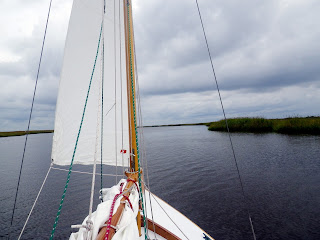 Near Fishing Point the wind fails completely.  I start the outboard but keep the throttle set at idle speed for a relaxing motor up the bay.  The wind picks up, briefly, and I sail, briefly.  Then motor again.  And then sail a little more as I approach the north end of the bay in the early afternoon.

At 2 p.m. I motor into the Transquaking River, a quiet, gently curving waterway that runs through the marsh and up past a hardwood forest to the north.  It is quiet and beautiful.  I motor up the river for a mile or so and drop anchor.  There I check on my sleeping gear to find that is has dried out.  I tuck it all away in the various stuff sacs and hide it up under the foredeck.

Soon I am on my way back down the river as dark clouds move in from the east.  With the clouds comes some wind and I sail east across the top of Fishing Bay, dropping anchor a little after 3 p.m. well away from the shoreline. 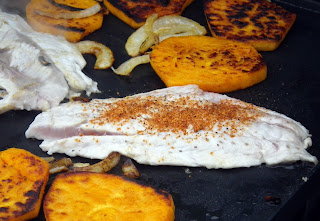 I relax, clean up the boat and fix an early supper of grilled bluefish with cajun spices, onions and sweet potatoes.  In the evening I read.

I also check on the forecast.  Fog, showers and thunderstorms for tomorrow.

Most excellent and enjoyable.

I followed your SPOT track up the Transquaking River and saw that you stopped there for a while. It looked like a nice place to overnight. Too early to stop? Mosquitoes?

Nothing like an outboard that starts when you want it to. Great account of the passage through Laws Thorofare and a great photo of dinner.

Dave,
it was a little too early, plus with light winds and fog forecast for the night I wanted to anchor out in the calm bay, away from the marshes and bugs.
It would be a beautiful place to kayak.

Yer killin' me. Looks magnificent. I can't wait to get back out on the water...

Watched some of your NCC friends paddle by Beaufort docks last weekend.

As always, great writing and images.