I wake to a light SE wind.  The fog I had noticed in the early morning hours is gone.  I pack the sleeping gear, eat a quick breakfast of a granola bar and a cup of fruit.  The anchor is up before the sun.

I sail south on glassy water, trying to pick out Gunbarrell Point and the entrance to Little Pungers Creek. It is lost to me somewhere in what appears to be a solid line of marsh.  I look only for future reference, with this wind I'll sail new water down the west side of South Marsh Island. 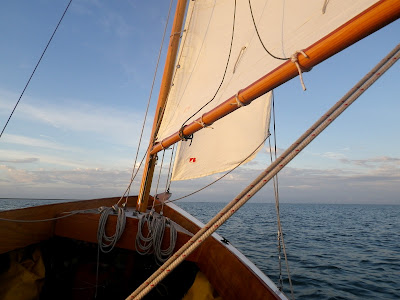 The breeze is decent sailing across the mouth of Johnson Bay.  As I enjoy the full sails I see them quickly turn orange.  The sun is over the horizon.  The wind gets better as I pass a narrow point and see Pry Cove to the SW.  It is a large bay, larger than I had expected.  I look at the chart to see there creeks, anchorages and islets spread around the cove.  A future anchorage, I hope.

I continue south through Holland Strait.  Slipping between tiny Pry Island and Sedgy Point I leave South Marsh Island behind.  I've anchored there four times in the last two years, each time a pleasure. 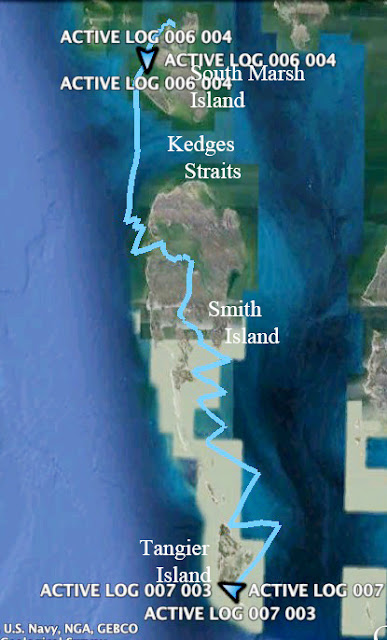 I enter Kedges Strait at over four knots.  Grey clouds move in from the SW.  The water is dark and choppy, the wind swings to the east and gets stronger.  The northern tip of Martin National Wildlife Refuge is two and a half miles to the SSE, Solomons Lump Lighthouse is a little closer.  The sky gets darker. 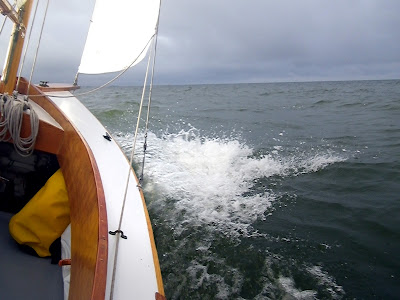 At 9 a.m. I pick out the rock jetties that mark the west entrance to the Big Thorofare on Smith Island.  I make a series of tacks towards the jetties, spotting just to the north a shallow entrance that could be a shortcut to the thorofare.  Getting closer I see that there are sandbars across the entrance.  I would have to raise the centerboard and rudder to make the shortcut.  And I would most likely lose my wind to a small stand of trees just south of the inlet. 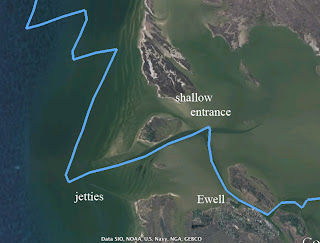 I fall off to run down the jetties, tack and then sail at five knots up the channel.  The water is very shallow inside of the jetties.  I drop the main and jib, drift out of the channel and feel the centerboard touch the bottom.  Two cranks on the winch raises the centerboard, I start the outboard and motor directly into the wind towards Ewell.  I have no plans to stop in the village that day, but the thorofare carries me right along the waterfront.  At a crab house on the east side of the channel I turn to port as slip through a cut in the narrow island that sits across the channel from the Ewell.  On the far side of the island I leave the channel and anchor up near the trees, clean up the boat and relax a bit. 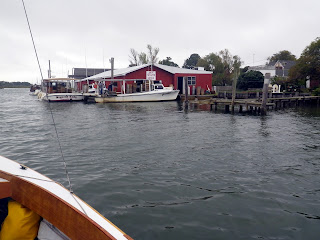 I raise anchor and motor SE on the Big Thorofare, turning west and then south at Marker "31" on to Tyler Ditch.  The channel through the marsh is well marked, green markers to starboard and white pipes to port.  I can see the current swirling around the markers and crab floats, the outboard is working against  the running tide.  A waterman heading north outside of the channel in a jon boat waves as he goes by. 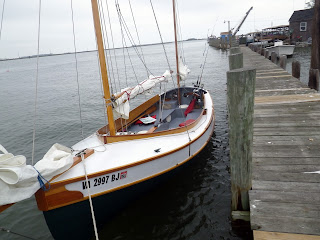 A little after 11 a.m. I reach Tylerton, rounding the point near the Chesapeake Bay Foundation's classroom building and dorms.  About 200 yards past the point I tie up at the public dock. Three blocks to the Drum Point Market, three blocks to a great crabcake sandwich and an outlet where I can recharge my camera battery.  I also pick up some triple a batteries, my am/fm radio is going through my supply quicker than expected. 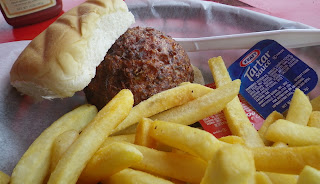 At 12:30 I cast off the docklines and motor south along the Tylerton waterfront, following the shoreline's curve to the SE.  Heading directly into the wind I stay under power entering Tyler Creek, which looks to be more of a bay than a creek.  But considering that most of it is just a foot or two deep with only a single narrow channel, it really is a creek.  I was surprised my first time here by the navigation markers.  This time I know to look for nothing more than the occasional twig put there by the local watermen. 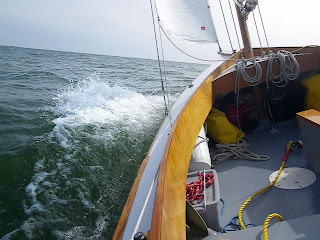 West of Horse Hammock, where I've got depths of three and four feet, I shut off the outboard and raise the sail.  I can already see Tangier Island to the south through the haze.  The wind is excellent.  South of Peach Orchard Point, at the southern tip of Smith Island, I make a series of tacks on the east side of the the shoal that runs from Smith all the way to Tangier Island.

Late afternoon finds Spartina on a last tack past Port Isobel, the island just to the east of Tangier.  The tack carries me past Port Isobel right into Cod Bay, my anchorage for the night.  The centerboard touches bottom.  I raise it, point Spartina into the wind, drop the anchor. 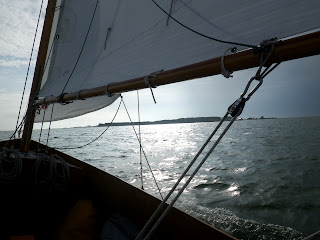 After a big lunch at the Drum Point Market I have little appetite for dinner.  I get out some crackers and a can of oysters.  That and a cup of fruit will do it for the night. 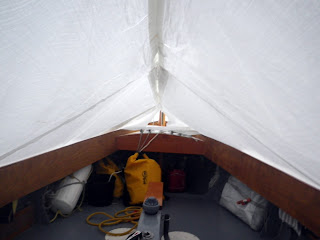 After dinner I look to the west and see a dark cloud coming my way.  I turn on the weather radio to listen for warnings but there are none.  Just the typical "chance of showers and thunderstorms."  I decide to put up the boom tent, something we haven't done on a cruise for almost two years.  But with the size and darkness of the cloud I think it is the right thing to do. 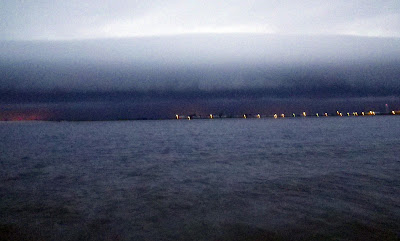 A little after 8 p.m. the lighting and thunder starts.  I'm in my sleeping bag, my sleeping bag is inside the gore-tex bivy.  There is no wind or rain, just lightning and thunder.  The pace of the thunder increases until it is almost constant.  Looking up at the boom tent I see it glow under the continuous lighting. 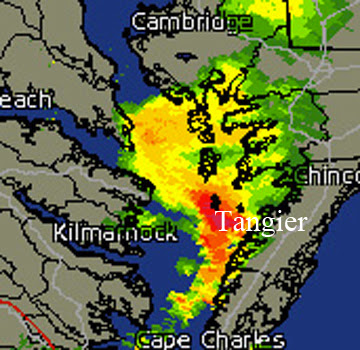 After an hour of lighting I hear the first few drops of rain.  Then a torrential downfall accompanied by a blast of wind.  Spray flies through the vent in the forward part of the boom tent.  The lightning continues.  I flip the top of the bivy over my head to stay dry.

Spartina bucks in the wind, the rigging shudders, the tent shakes.  It goes on and on.  I'm surprised that I am not worried about the storm.  I find myself fascinated, not afraid.  I do wonder about the anchor.  Did I put enough line out?  Are we being pushed across the harbor?  Sometimes I can see lights of nearby homes, sometimes I can't.  The ten pound navy anchor, five feet of chain and mushroom anchor seems to be holding.  But I would put more line out if I could.  I reach out of the bivy now and then to sponge out the water that collects near my head on the bunk flat.

The storm seems to end two hours after it started.  The lightning, wind and rain end and it is quiet.  Then a little rain.  I fall asleep.