Morning comes grey with a breeze out of the SW.  Weather radio reports a 10 mph wind with two foot chop on Tangier Sound.  I sail off anchor under mizzen and jib, raise the main outside of Old House Cove.
Dark clouds hover above Spartina, but blue skies out over the sound hint of a nice sail to Smith Island.  It is choppy in the shallows near Great Point at the mouth of the Little Annemessex River.  It begins to rain.  I expected nothing less.  I reach up and pull the hood from my foul weather jacket over my head.
Out in the sound north of Janes Island Horn the rain stops and the skies clear.  A flock of seagulls are working the shoal near the marker, I suspect they are hovering over baitfish being chased by bluefish in the shallows.  An easy cast into the frenzy might bring in a nice fish, but it is too early in the day.  A fish towed on a stringer behind Spartina for seven or eight hours does not sound appetizing.  I continue west towards Smith Island. 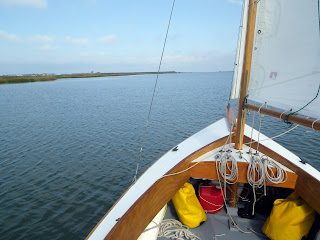 Half way across the sound we are in the lee of Smith Island.  The wind is good, the water calm.  The sun feels warm and I strip off the foul weather gear.  Closer to the island I make a short tack north to get in the entrance channel to the Big Thorofare.  I cut across the shallows as the channel bends around the point, the centerboard bumping the bottom.  Beyond the point the Big Thorofare turns northwest and we've got the wind behind us.  The marsh on either side is bright green from the rains.  We sail downwind at four knots. 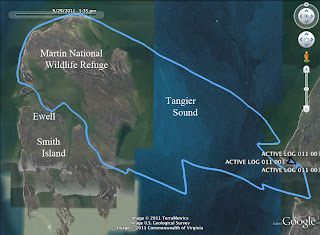 The wind carries us up the thorofare.  I drop the sails just outside the entrance to Ewell, motor past along the waterfront and tie up at the gas station.   My luck with the wind has not been the best, I need to make sure I've got plenty of fuel to get back to Crisfield.  I get a gallon of gas, then motor down the waterfront to the public dock. 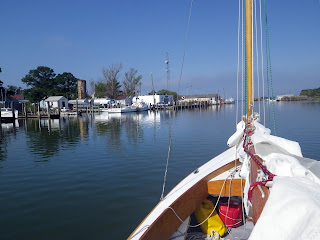 It is the beginning of the off-season for Smith Island.  The two restaurants in Ewell are closed on weekdays.  I'm disappointed.  One of those restaurants is Rukes, home of the best crabcakes on Chesapeake Bay.  I walk down to the grocery where they serve lunch and order a ham sandwich to go.  Three young watermen are sitting at a table talking about crabbing and watching soap operas on tv.  They talk about the rains and the winds that are causing the island to flood.  As I wait for my sandwich the water is reaching up onto the the streets of Ewell turning the grocery store into a small island.  The clerk is in the back making my sandwich, a waterman pays his bill and opens the register to make change.  Another, older, waterman that talks in a high-pitched island brogue, says to no one in particular "I can't believe they are watching goddamn soap operas" and leaves. 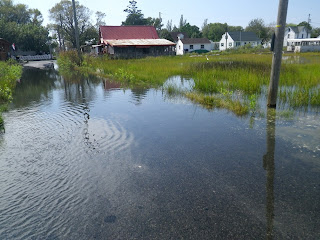 I walk back to the public dock finding that streets that were dry an hour earlier now have almost a foot of water on them.  A local comes over to help me cast off my lines, telling me I need to learn how to tie better knots.  As I motor away he mentions that I can cut across the sandbars, the water flooding the streets tells him that there are a couple extra feet of water over the shallows.  Out in the channel I wish I had asked him how to tie a better knot.

I head out across the flats, bypass the channel entrance with the jetties and take the short cut over the sandbars that I had avoided a few days earlier. 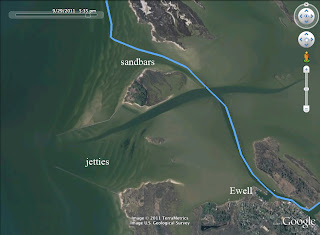 We sail downwind along the west coast of Martin National Wildlife Refuge until the wind fails.  I round Fog Point and a light breeze fills in.  We ghost along the marshes at the north end of the island at just a knot or two.  I consider stopping at Back Cove for the night, but it is too early in the day.  Passing Terrapin Sand Cove the afternoon breeze fills in.

Spartina makes a long SE tack towards Island Point.  We make one last tack to round the point, enter the river and sail back into Old House Cove a little after five in the evening. 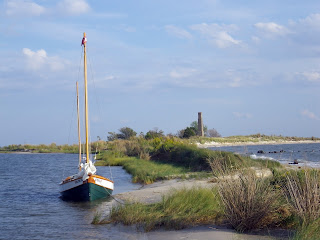 I beach Spartina and go for a walk, taking some photographs of the boat and the brick chimney on the point.  Then we move out into the cove for the last night of the trip. 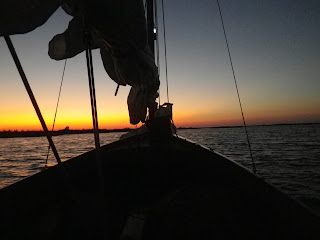 Another favorite post. I remember water on the streets. Thanks.

"I walk back to the public dock finding that streets that were dry an hour earlier now have almost a foot of water on them."

I'm thinking you could have sailed across the island with your shallow draft.

I've been sailing my whole life and admittedly I'm the worst knot-tier there is. Any chance I get to use a bowline, which is usually, I do so.

That Bluefish would have been fine after 7-8 hours. By then the rigor would have gone and the salt water would have preserved it. Just think of what Powhatan had to deal with. Nice journal, Steve!

I'll catch up with you friday or saturday. Say "hey" to Kevin for me. If you have a chance enjoy some mussels at Bertha's Mussel - it doesn't get any better than that.

Just curious - do you write down logs at the end of each day, with all these details in them? If so, do you use a laptop or just plain ol' pen and paper?

I'm just impressed at the amount of detail you report, so I'm assumig either you've got a fantastic memory for such things, or you're writing it all down as you go along to remind yourself later.

Bill,
I carry a rite in the rain waterproof notebook with me during the trips, jotting down weather, speed, observations or whatever throughout the day. After dinner I write a couple of pages in a log, basing it on the notes. When I get home I use the log, the notebooks, photographs and the gps track to help me write this online log. Comparing all that information - the logs, photographs, tracks and notes - seems to bring it all together.

You had a good personal experience,you seem to have enjoyed yourself but for sure you need to learn how to tie better knots, next time there may be no locals around.