Day Five - back to the Honga River

It got breezy overnight as the cool front blew itself out, yet there was nothing but a gentle breeze out of the east when I woke up at 6:30. Watched the eagles as I packed up my sleeping gear, pulled the anchor just after seven and started a downwind sail on the Little Choptank River. 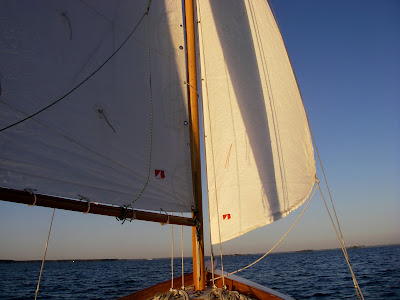 It was a slow easy sail, moving at two or three knots. The wind picked up briefly then just as quickly dropped off. By the time I reached James Island I was moving along at less than two knots. 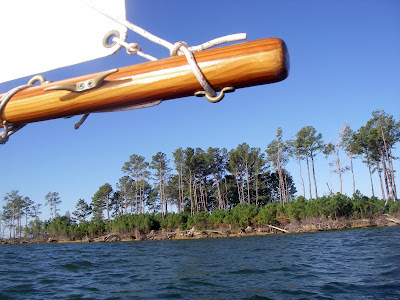 Another beautiful morning. Not a cloud in the sky and a cool, gentle breeze. I steered with just my knee on the tiller and just relaxed in warm sunshine. 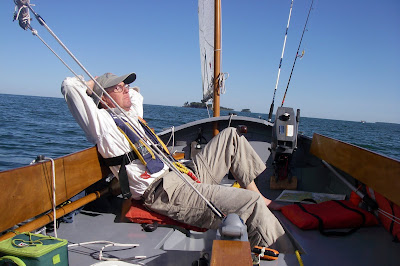 As I passed Oyster Cove I saw more eagles flying above the tree line. I guess there have been eagles all along, I just never looked up to notice them.
Off of Punch Island Creek the wind failed and I started the outboard, motor sailing south towards The Marshes. 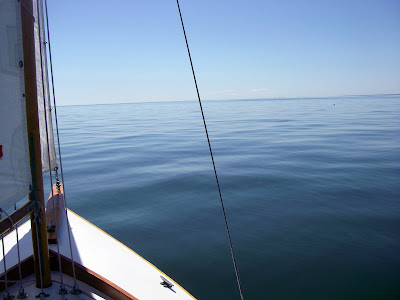 The southwest wind filled in just as I approached The Marshes, also marked on some charts as The Big Broads, north of Barren Island. I was working my way to Fishing Creek, the northern entrance to the Honga River. I kept tacking off the beach and then back in, looking for a gap to cut through the shoals. I never did find a gap, but that was ok by me. It was a beautiful area. White sandy beaches mixed with marshes, clear shallow water with schools of menhaden packed in tight balls just off the shore.

A waterman ran by in his skiff, slowing now and then to toss an eel pot - a cylinder-shaped mesh trap - over the side. He didn't seem to notice me, but after he was done working he sped by again giving me a nice smile and a wave. 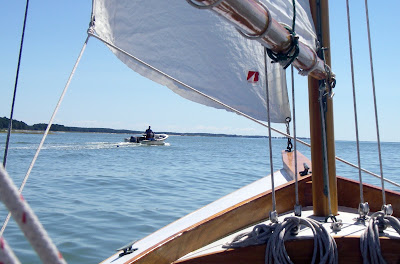 I caught a couple of small bluefish off The Marshes, including this one that wasn't much larger than the lure. All went back into the water to be caught another day. 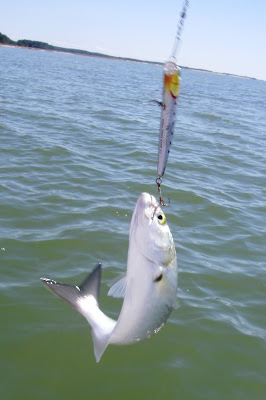 As I began to pick out the markers leading to Fishing Creek I realized that there were no short cuts, I would have to tack back off the beach towards the top of Barren Island and follow the marked channel through the flats all the way to the creek. I tacked back out and the wind picked up, gps showing that we were moving at 5 knots. I followed the channel in with the wind on the starboard quarter, then made a turn to the left as the channel got narrower. The markers were now supplemented by sticks and pipes here and there showing the shoals both in and out of the channel. For the final run under the bridge I had the wind on the starboard beam, but it was a gentler wind blocked by trees on the shore. Looking at the water around the markers I saw I was sailing against an outgoing tide. As I passed under a bridge Spartina came to a stop, tide pushing out and wind blocked by the pilings. I cranked up the outboard to move about 20 yards to the past the bridge, caught the wind and kept on sailing. 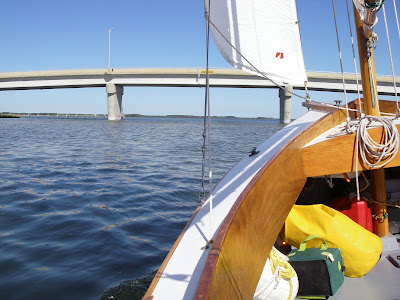 The afternoon wind kicked up on the Honga River. I tacked southwest towards Wheatley Point Cove, dropped the anchor in the cove, surrounded by marsh and what looked to be a hunting lodge, at 4:30.
steve
distance sailed 25 nautical miles
ave speed 3.2 knots
Posted by Steve at 7:37 AM