In the early morning hours the wind swung to the east. That wind, working against an incoming tide, made my anchorage a little bumpy for a while. A little uncomfortable as the boat rocked port and starboard, forward and aft. But I still got a decent night's sleep in. 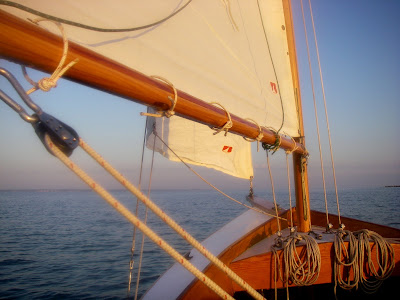 All sails up and sailed off anchor at 6:45 as the sun came up. Light east wind. I sailed south to get around the sandbars at the south end of Barren Islands, then turned north a few hundred yards off of the shore. There is Barren Island below, I anchored down around the corner to the right. 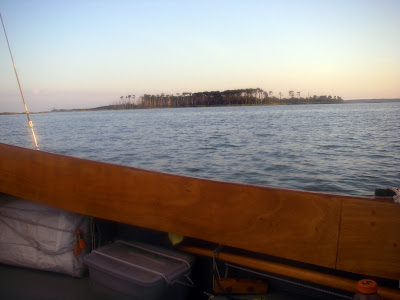 After two days of small craft advisories I kind of enjoyed the light wind. The breeze just barely ruffled the water at first, carrying Spartina north at 2 kts or less. Ok by me, it was a very peaceful morning.
By 8:30 the wind failed completely, I started up the outboard and motor sailed (more motoring than sailing) past the upper end of Hoopers Island, Punch Island Creek (where Bruce and I anchored on a rainy night last year - you can read about it here and here) and Taylors Island. 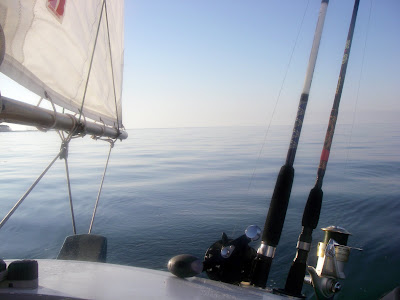 Finally somewhere along the beach of Taylors Island south of Oyster Cove the wind kicked in. Not a lot of wind, but enough to carry Spartina along at 3 knots. A close look at the water rushing around a crab pot marker made me think the tide was helping move the boat along. 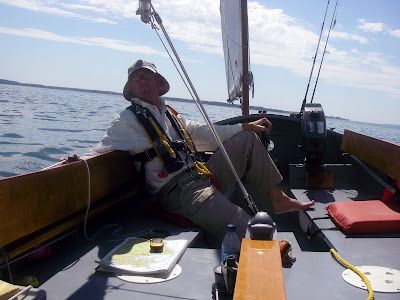 I sailed over the shoals and behind James Island onto the Little Choptank River just about noon. The wind picked up on the river and I sailed at 4 knots. Blue skies and a nice breeze, really great sailing. I passed this very nice yawl at the mouth of the Little Choptank and wondered by she didn't have her sails up. 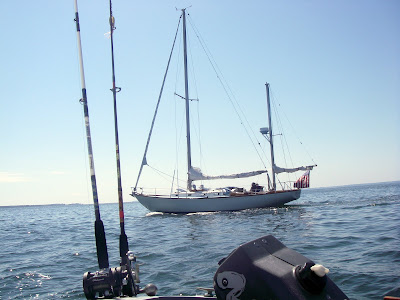 The wind started dropping at 2:30 off of Trippe Bay. I started the outboard and motorsailed past Cook Pt. onto the Choptank River. It was time to start thinking about an anchorage for the night. Strong north winds were forecast for the next day so I wanted to be somewhere on the north side of the Choptank. I hoped that would give me a relatively easy sail to Oxford on day four. 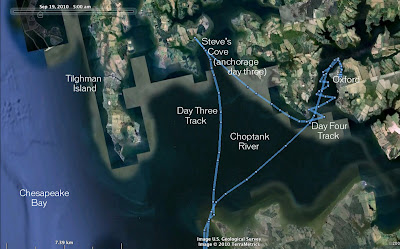 After looking at the charts for a while I picked out a little cove just inside the entrance to Broad Creek. The charts showed a very shallow entrance with good protection for winds from just about any direction. I motorsailed across the Choptank and onto Broad Creek, entering the cove with a raised centerboard and rudder and dropping anchor at 4:45. 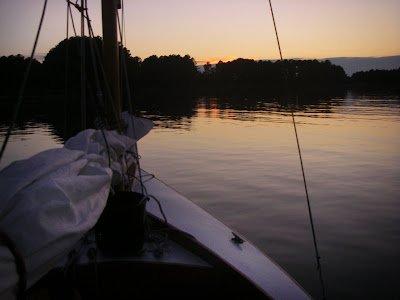 Our friend Mary Lou has since told me she thought I had picked the cove for its name. It is called Steve's Cove. Pretty cool. I had it all to myself, surrounded by farmland and tall trees. A very nice anchorage.
steve
distance sailed 28 nautical miles
moving average 3.3 knots
max speed 7.7 knots (that is from day two, max speed day three was probably 4 knots)
Posted by Steve at 9:49 AM

I feel like I need to get a bucket of popcorn. I'm on the edge of my seat here.

Great photos, Steve. And I like your descriptions so I can look at Google maps and see where you were. Pretty cool.

Actually, more than popcorn, I feel like I need to get the hell out there on the Bay in my own sailboat and start doing some exploring!