It was blowing strong enough for a small craft advisory, of course, as I drove across the marshes to Rumbley for the start of an eight day cruise. I would expect nothing less for a Chesapeake Bay sail. 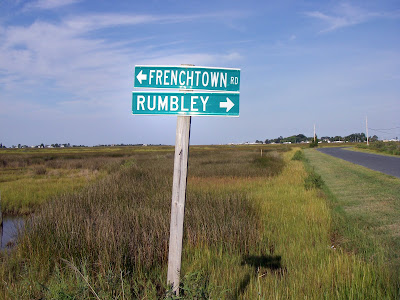 The little Eastern Shore town about six miles north of Crisfield offered a very nice, free ramp that opened out onto Tangier Sound. It was 130 miles and a three hour drive, with a stop at Sting-Ray's in Cape Charles for breakfast, to the fishing village. I pulled into the parking area at 9 a.m. with a strong wind gusting out of the NNW. 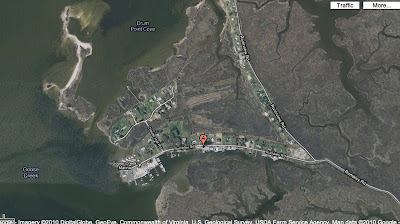 The hardest part about rigging Spartina that morning was stepping the mast in the high winds. I have to stand the 18' mast vertically and lift it straight up, move it forward about 15 inches and then drop it down through the hole in the foredeck. The high winds, grabbing at the mast and all the lines, made this a challenge. I tried a couple of times, struggled, then waited about 30 minutes and during a lull in the breeze dropped the mast into place. (This was only the second time in six years of sailing Spartina that I have had this problem. Usually stepping the mast is easy, but high winds can be a killer. I'm considering cutting a slot into the foredeck this winter so I can set the mast at an angle and walk it into the vertical position. But I'll have to think about it for a while. I don't like to make any big changes on the boat without a lot of thought.)
Otherwise everything went fine. Got the boat rigged, pulled the jeep alongside and transferred all the gear, food and water for the trip. 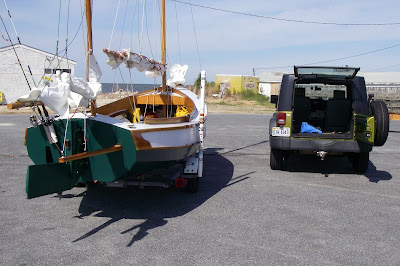 I backed Spartina down the ramp just about 11 a.m. I was in no rush to get out on the water, the wind was forecast to drop midday and I wouldn't mind starting the trip in some more comfortable conditions. But the wind hung on so I pushed off from the dock under power at 11:20 and headed out the channel that leads to the mouth of the Manokin River and then to Tangier Sound.
I always plan the first day of any cruise to be an easy one. South Marsh Island was just about 12 miles away, an easy sail even if it was into the wind. I hoped to be there by mid-afternoon so I could get settled in the boat, have a good dinner and relax.
I started out sailing with just mizzen and jib doing a decent 4+knots. Once I got into a little deeper water the waves calmed down I raised the main with a single reef, sailing west towards South Marsh Island at 4.5 knots and better. 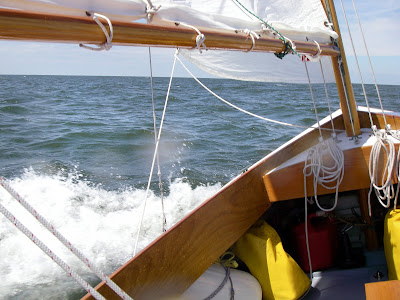 It was a beautiful, sunny day, not too hot. A great way to start the trip, with the added bonus of a forecast that called for the same kind of weather over the next several days.
By early afternoon the wind starting falling off as I approached the R"12" bell. A handful of boats were trolling the area, known as Chain Hole to fisherman, so I thought I would give it a try and put out my trolling rig. After a few passes I had no luck so I turned back west to South Marsh Island. 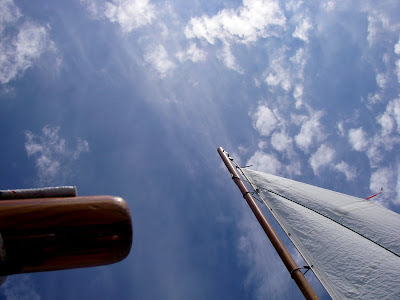 I reached the island just before 3:00 and spent about thirty minutes, with cb and rudder partially raised, exploring the east side of the island including the entrance to Little Pungers Creek. 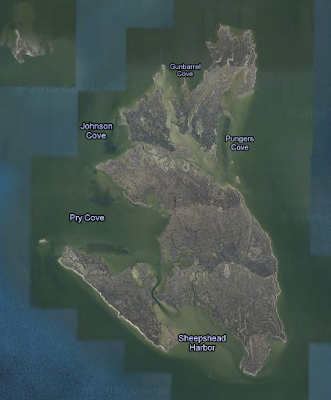 At 3:30 I dropped the anchor in about three feet of water in Pungers Cove just north of the creek entrance. I had dinner (a single serving slice of spam, potato and chopped sweet onion, all cooked on the griddle) , set up the bivy for sleeping and then read for a while. A nice way to start the cruise. Below is my view of the world that evening.
steve 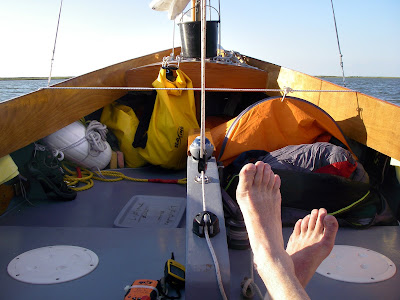 Aaaaah. Anchored, fed and reading while lying down. It will be sleepy time soon.........(the noise that snoring makes) It doesn't get any better.

At least nobody around to complain about the snoring.
That was a great night. It got even better later on the trip when some cool fronts came through, the stars on those crystal clear nights were fantastic. We'll get to that part soon.

I wonder if you have an idea of how many guys (like me) are out there reading your blog and basically thinking something along the lines of "sheeeeee-it, I wanna do that."

Not sure I would want to do that kind of trip solo, though. I like having company to shoot the breeze with.

I also don't think I'd get away with an 8-day pleasure cruise away from the family. And they sure as heck aren't doing to do an 8-day sail with me. Sigh.

Hey Bill ... at least one other guy is following and thinking exactly like you. ;-)

Bill, Rich,
As I do this blog I'm finding out more and more people are on the water doing this kind of thing. We just don't hear about it very much. Check out the Watertribe, the Texas200 and David Perillo's open boat sites. There are a lot of people having their own little adventures. steve