so the sheriff asks my wife if she knows where I am.....

I can't begin to describe what a great trip this was. Eight days, all sunny. Beautiful water, coves, bays and rivers. The gps odometer showed 191 nautical miles/220 statute miles of sailing. Below is a photo from one of the cloudier days. Really. 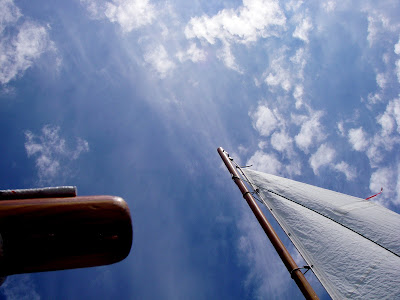 And fresh fish was on the menu a couple of times. In this case a striper. I also had good luck with bluefish. 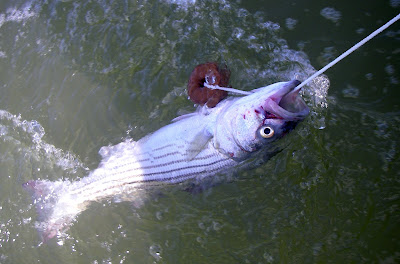 Anchorages were nice and peaceful, like this little unnamed cove off of Broad Creek, which is off the Choptank River. 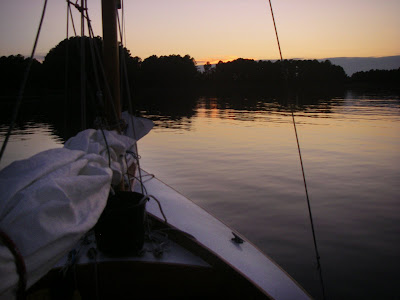 There were four days of small craft advisories while I was out, this was the third day of warnings with wind up in the 20 knot range with gusts higher. I was sailing upwind on the Tred Avon River, a two mile stretch of river directly into the wind to get to Oxford, Md., the northern most point on the trip. The yawl, under mizzen and jib, handled it very easily. As my friend Kevin (of Slip Jig fame) said, it was "blowing like stink out there" (we missed each other in Oxford by a matter a minutes). 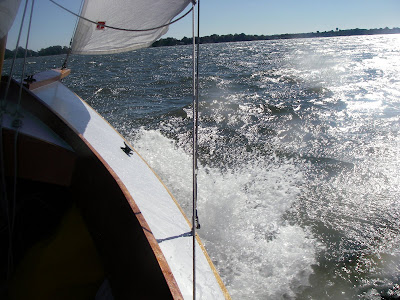 And of course of some (beautiful) calm water mixed in there. 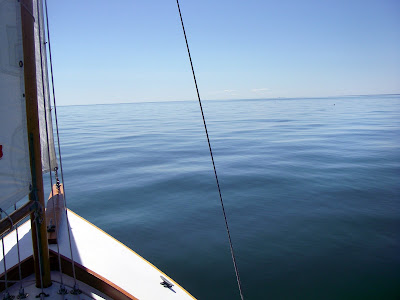 Hey, I don't look too terrible after six days on the water. 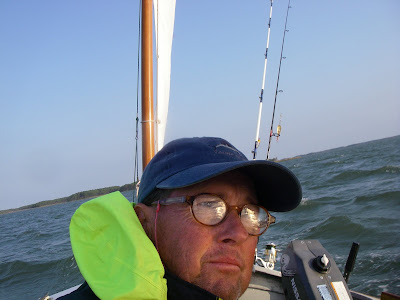 It was just a great trip. Lots of fun, adventure. I made a couple of mistakes here and there, pushed myself a bit and learned a little bit about sailing (and myself). 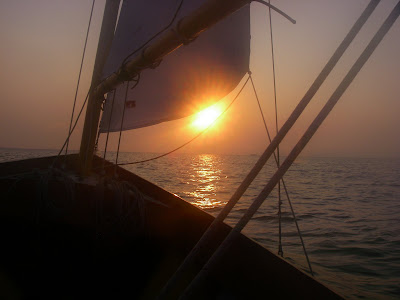 As for the sheriff, the Sommerset County, Md. Sheriff's Dept. called my wife yesterday asking if we owned a green jeep wrangler that seemed to have been sitting at the Rumbley, Md boat ramp for a long time. A concerned citizen had called in about it. Yes, she said, I was out on a sailing trip. She tried to explain my approach to safety and SPOT satellites and all that but by the end of the discussion she felt like she was being lectured (when it should have been me being lectured).
Deputy - "The Bay can be a very dangerous place."
My wife - "Yes, I know, that's why I am at home in my living room."
Deputy - "Well can you have your husband call us when he gets in?"
I did call the Sheriff's Office this afternoon and thanked them for their concern. I told them I had checked with the road dept. (who controls the ramps) and they said it was ok to leave a vehicle there in the parking lot. And pointed out that I had talked with the marina owner next door and told him that I would be out for a week.
And again, I thanked them for checking on me.
"OK, but how about letting us know before you go out next time?"
I will let them know. There will be a next time. It was a great ramp and a great place to sail.
I have a lot of cleaning up to do but hope to start posting daily logs in a few days.
steve
Posted by Steve at 6:48 PM

You are the only sailor that do the same I love to do.

Shorts expeditions alone, near the coast, on a little traditional sailboat.

I write about you in my blog. Look!

Fernando,
thank you very much for the nice comment. Brazil holds a special place in my heart. Morning Star is a beautiful boat. I'll do a post about your blog, the boat and Brazil tonight.
steve

hey steve welcome back glad you had a good trip.......i guess the Police were concerned; over here we have RNLI and coastguard; the marina where I launch from check a check on me too. lookimg forward to your updates - glad it went well

Hi Steve,
Looks like you had a nice trip and great weather! I followed along watching the Spot track. About that unnamed cove on Broad Creek - I figured you had chosen it for the name. It's listed on Google Maps (though not on my charts) as "Steve's Cove".

Mary Lou,
good to hear from you. I had no idea about "Steve's Cove". That makes me laugh. Thanks for the info. If I had been able to name it I would have called it "Steve is really tired and wants a good anchorage for the cold from coming through Cove".
steve

There's so much about this post I just love. The concerned neighborly lady, who no doubt has seen the signs of friends, maybe family, who never came back. The deputy, who knows watermen, probably has one in the family, and wouldn't just blow off the notion. Your wife, so sensible, and unflappable. And, of course, you, having the time of your life, floating in a sea of bliss and tranquility while all this is going on.

Me, I'm still working on my boats, but it was nice to check in several times a day and see where you were then.

Barry,
I forwarded your message to my wife, she said it read like a short story. I agree. Thanks.
The boats on your site look beautiful. I'm very unhappy that I won't get to see them in person this year at St. Michaels. Have a great time.
steve

On Saturday, 9/25, I was on my boat at the dock in Queens Creek (just near Gwynn Island) with the VHF on while doing some cleaning up. I heard someone call for another boat and identify himself as the Spartina.

I thought, "hey, I wonder if that is the same Spartina from that blog."

Maybe it was you after all!

Bill,
by Saturday I was at home unpacking the boat and drying out gear. But Gwynn's Island, that stretch of the Bay, is definitely on my sailing list.
steve

Well let me know when you're finally planning on making it out that way - I'd love to see your boat in person - she certainly looks lovely in the photos - and shake your hand.

Your sailing trips look like a hell of a lot of fun to me, particularly because I spend most of my days trapped at a desk.

I'm hoping to do some longer (i.e., several day) cruises around the Chesapeake myself. I just got my boat about a month ago and have done a couple overnighters - just enough for my wife and daughters to reach the initial conclusion that they're not quite so enamored with the idea as I am.