day one - north from Rock Hall

"One morning in Mid August, instead of going to work I packed my lunch and went to sea.  My wife was asleep so she could not object......I sailed up the Chesapeake from my home port of Queenstown.....I felt good about this first step.  I dropped anchor in a tiny cove and fixed supper."
-Washington Tuttle

We pay the $16 toll at the Chesapeake Bridge Tunnel in silence, flourescent lights glowing in the night.  Stingray's, the gas station/diner that is our usual stop for breakfast on the eastern shore, shows no sign of life as we drive by before dawn.  A hint of the coming day, a cool clear one, comes with an orange glow to the east at Machipongo.  Daybreak comes at 60 miles an hour on Highway 13 passing by T's Corner and the turn off to Chincoteague.  We pass through Pocomoke just above the Maryland state line, make a wrong turn in Salisbury, have breakfast just north of Easton.  We pull into the small parking lot at the Green Lane boat ramp in Rock Hall, Maryland after five hours on the road. 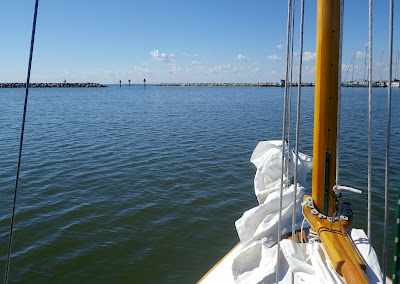 We rig the boat quickly with a steady breeze blowing through the stacks of crab pots at the ramp.  Bruce hands over supplies - food, propane tanks, life vests and enough gear to fill the back of my jeep - and I tuck it all away on Spartina.  It disappears below the thwarts, below the bunk flat and below the coaming.  I wonder how it all fits in such a small boat.

A quick hello, handshakes and hugs, from our Rock Hall friends MaryLou and Fred who come down to take the jeep and trailer to their house.  Then just as quickly a wave goodbye as we motor away from dock.  Out in the Rock Hall Harbor near Waterman's Crab House we cross the path made three years earlier coming in a bumpy ride from Kent Narrows.

All sails up with a teasing wind outside the Rock Hall jetties.  We are glad to be off the highway and on the water with a beautiful day.  I make a few tacks out towards the bay then a few more north towards Swan Point.  A little after noon we are motor sailing - more motoring that sailing - on the calm water.  We head north just off the beaches and marshes that line the eastern shore.  To our port a large sailboat motor sails alongside of us, then comes a tug pushing a barge up the deepwater channel.  The skies are blue with white puffy clouds. 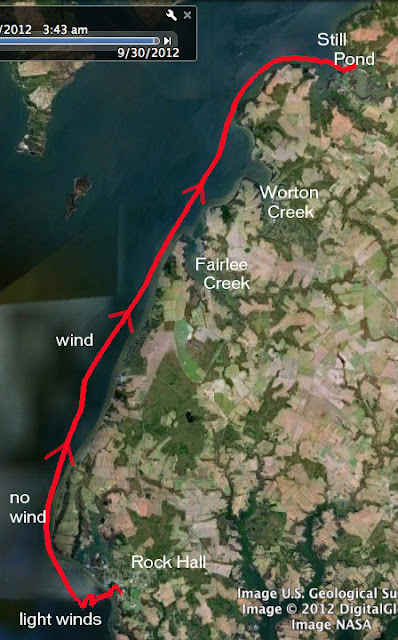 Through the binoculars I see a schooner ahead coming toward us.  Like Spartina, she has her sails up but is motoring.  Just as she approaches her  limp sails fill with wind.  The water darkens behind her as a solid breeze sweeps across the bay.  Soon Spartina's sails are filled by the west wind.  We shut down the outboard and sail north making 3.5 knots. 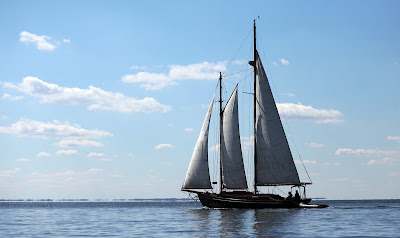 We wave to the crew on the schooner, a man and a woman, just as the winds takes hold.  I look with binoculars but the dinghy blocks the stern and I cannot make out of the schooner's name on the green hull.  Maybe she is heading to Fells Point in Baltimore for the schooner race.  Or maybe she is heading south for the winter.  I look down at the gps and see Spartina is moving at over 5 knots. 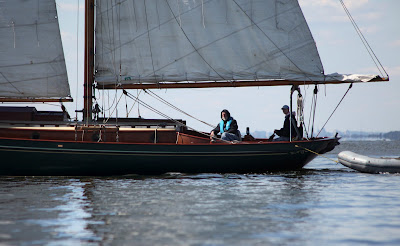 The wind carries us steadily north past our first possible anchorage at Fairlee Creek, and soon beyond the second anchorage at Worton Creek, a half knot current helping us on our way north.  I put out the trolling line but get no bites. 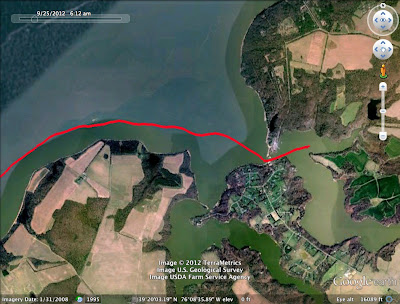 We coast past Worton Point and turn east north of Plum Point with a following breeze.  Wing and wing it is easy sailing into Still Pond.  Markers red and green up against the shore appear to lead to nowhere.  Rounding up at the first marker Bruce lowers the main and we into the channel under mizzen and jib.

Bruce, standing up forward, spots the creek's opening to the right and sees that the creek jogs back quickly to the left behind a small island and a low lying marsh.  We ease in with the steady wind, people fishing in a small park to our starboard and the tiny island island that hides the creek to port.  Past the island and the marsh is a small  Coast Guard station and a couple of boats at moorings.  The creek splits in two, the branch to south has boats and homes along the water's edge.  The branch to the north, Codjus Creek, has nothing but trees and marsh grass along the shoreline.  We head into Codjus Creek. 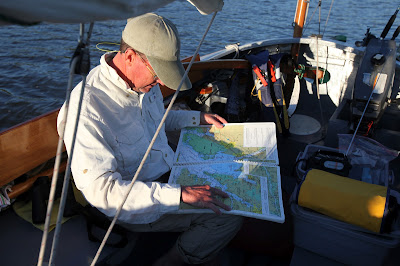 About 4:30 we lower the jib and drop the anchor in what has to be one of prettiest anchorages we have visited.  A good first day on the water.  Dinner, a little conversation and then planning for the next day's run to the C and D Canal.

Excellent! It has begun! Now I'll have to keep clicking back on the page to see when the next installment appears...

We'll aim for one a day, but it might take longer than that. But it is kind of fun to revisit the trip - it already seems like a long time ago.

Best blog for the "Armchair Sailing Adventurer"! Thanks Steve! - Rich

Steve -- great stuff! I've heard great things about Still Pond but never dropped anchor there. Thanks for putting this log out there -- really enjoying it.

I first anchored at Still Pond in 1992. That was before GPS and I approached the channel at night, a quarter moon night at that. I really did think I'd screwed up big time and was in the wrong place. That channel is magic. Still Pond is a great anchorage. IIRC there was a wharf with a little store right on the water. I wonder if it is still there?