The next day I headed for the Chincoteague Bridge in Chincoteague which wasn't far away.  There was no bridge tender.   A fellow in a Navy or Coast Guard uniform said he would go and find him.  The fellow went into a tavern and the bridge tender came out and opened the huge bridge just for me and my little catboat.  - Washington Tuttle 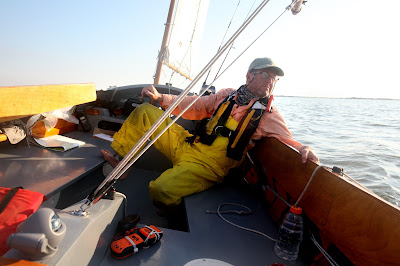 Morning comes with clear skies and a west wind.  I feel guilty for sleeping in until 7:00, Bruce does not share in my guilt.  It is a leisurely morning on Spartina, we take our time stowing the sleeping gear and having the usual breakfast of a granola bar and a cup of fruit.  We sail off anchor before 8:00 and make our way south on Sinepuxent Bay at 4.3 to 4.9 knots.  We pass under the bridge to Assateague and see from the ripples around the pilings that the tide is helping us on our way. 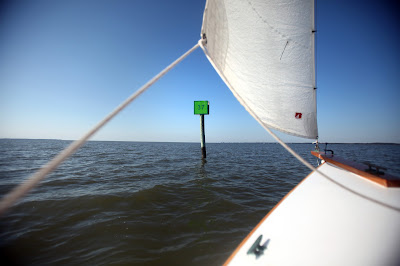 The bay is not very wide at first and does not feel like a bay.  It is more like a river and the channel within the river is narrow but the west wind is perfect for our southerly course.  We sail marker to marker with no other boats in sight, just blue skies and pretty water.

The bay is narrowest between Sandy Point and Assateague Island where the bridge is located.  South of that the bay begins to widen at Green Point then finally opens up very wide at Sandy Point though the channel is still narrow with just a foot or two of water on either side. 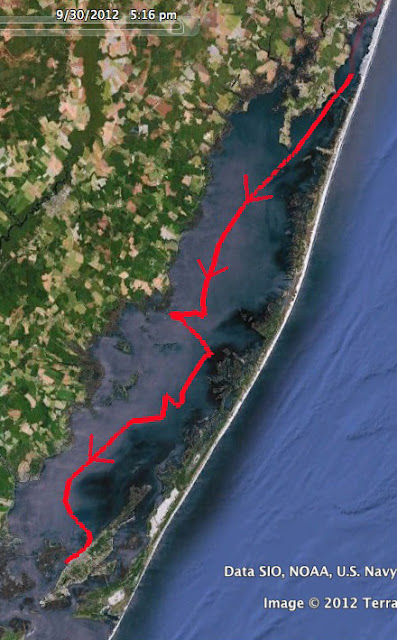 We follow the skinny channel to green marker 37, then we no longer worry about the channel as Sinepuxent Bay south of the marker has depths of six feet or better.  It is open water and easy sailing with a wooded shoreline a mile and half to the west and Assateague Island, a 37 mile long barrier island made of sand and maritime forest, a mile and a half to the east.

Sailing south I tell Bruce of a visit to Assateague Island years ago when we walked back into the dunes on a hot summer day and found the bleached frames of an old wooden shipwreck spread about in the sand.  The ship was old enough that the frames were held together with wooden pegs.
As morning gives way to the day white puffy clouds arrive.  The wind begins to fall off, then fills in and we continue on under full sail at 4 knots. 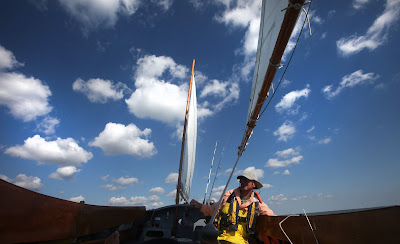 The wind falters again and swings to the south as we cross the state line and go from Maryland waters to Virginia waters.  We are now in Chincoteague Bay and for the first time I bring out my chart of the Virginia barrier islands, the third chart for this trip.  The wind does not hold a steady course, wavering from south to west and back to south again.  The wind and the tides do not agree and we find ourselves working through a heavy chop just as we begin to pick out structures on Chincoteague Island several miles away. 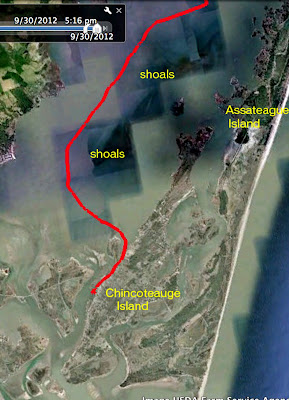 The wind kicks up stronger out of the southwest approaching another set of shallows, the Coards Marshes along the northwest shore of Chincoteague.  They are called marshes but save for a few high spots with some vegetation it is mostly mud flats.  We make our way along the marshes but the wind is stiff and the chop is very rough.  We motor sail to hold our course through some of the narrower passages making over 5 knots on a very bouncy sail.

Rounding marker 12 we cut the outboard and sail directly east toward Chincoteague.  Bruce, up forward with the binoculars, spots the marker for Chincoteague Channel well to the north right up alongside the island.  That would mean a long downwind run and then a mile back into the wind in the narrow channel.  While considering our options we see a local skiff head due east across the two shoals between us and the channel.  Good enough for him is good enough for us.  We follow his path and raise both the cb and rudder at each of the shoals to slide over them.  On the way I use the radio to call the swing bridge in Chincoteague but receive no response.

Twenty minutes later I try the bridge again and a man responds.  I ask for the bridge lift schedule, he says the next opening is at 4:30, about 30 minutes away.  I tell them we'll be in position for that opening.  I also ask about the lift schedule for the old bridge right downtown.  "What do you mean?" he asks.  I explained we would be heading down the channel and would need to get through both bridges in the afternoon.  With a laugh he says "That bridge is GONE!".  In that case, I tell him, we won't need the second lift.

We enter the channel just north of the new bridge, it is more like a shallow narrow creek with Chincoteague to the east and a small overgrown island to the west.  The current is running with us carrying Spartina to the bridge.  It is a strong current and I worry about being pushed to the bridge before the opening.  We head over to the Chincoteauge side and grab on to a dock to wait for our opening, figuring the bridge tender can see us about 200 yards away.  We nearly miss the lift as the bridge tender doesn't see us.  I call on the radio, the tender says it is now almost 4:40 but they'll open anyway.  I say thanks and apologize for the miscommunication as we pass beneath the bridge. 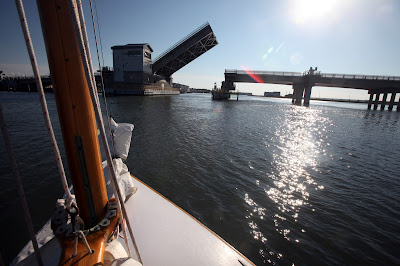 Beyond the bridge we motor along the Main Street waterfront of Chincoteague.  We pass a couple of restaurants and some commercial fishing boats, then condos and hotels.  I miss our hotel on the first pass, turning back to follow a row of white plastic pipes stuck in the mud to mark the channel to the Waterside Inn.

Hot, tired and smiling, we tie up at the hotel, the only boat in the off-season marina. 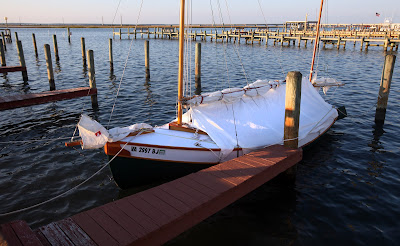 Walking up the dock with our foul weather gear still on Bruce and I stop and shake hands.  Another trip in the books.  One more to go to complete the circumnavigation.