I lucked into a helping tide and was soon into the Delaware...My centerboard touched the bottom.  No wonder the water can be rough in the Delaware....After a while I came to Bowers Beach.  It wasn't much more than a big ditch.  I treated myself to a meal in the restaurant. - Washington Tuttle 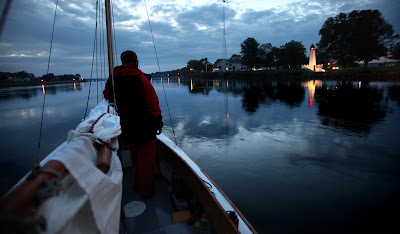 An early morning rain shower comes and goes.  Then comes back again, this time a heavier rain here to stay for a while.  I flop down the top of my bivy and hear Bruce do the same on the other side of the centerboard trunk.  The rain comes harder and I zip up my bivy all except for a small opening for fresh air.  It is still dark.

We are up at 5:30 trying to keep what is dry dry and trying to dry out, without much luck, what is wet.  Sleeping bags are for the most part dry.  Sleeping pads are wet, as are the inside of the bivy floors.  We rolled everything up and tuck it under the bungees under the foredeck.

Bruce hauls in the anchor at 6:15 and we motor through the dozen or so boats anchored out in the basin.  Rounding the corner from the basin into the C and D Canal I see the current is running steadily to the east, the direction we are traveling.  Soon we are out in the current doing 5.5 knots at just above idle on the outboard, the current adding the extra couple of knots.  The water surface is smooth with eddies swirling here and there.  Broken clouds above make for a beautiful morning. 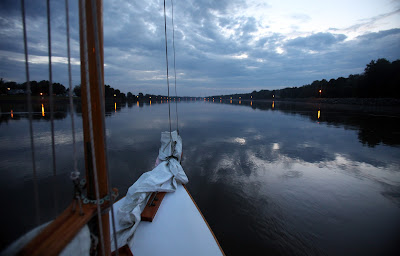 There is no other traffic on the canal, just Spartina puttering along.  Fish leap out of the water and break the smooth surface.  A bald eagle flies along the treeline and egrets take flight over the canal.  Bruce and I do not talk much.  Mostly we just watch the canal go by.

Once the sun is up we unroll the bivy's and sleeping pads to let them dry.  Breakfast is the usual - breakfast bars and a cup of fruit in syrup. 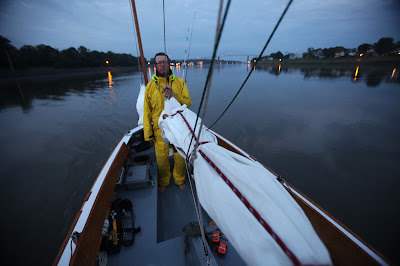 After a little confusion for the tides and tides predictor on my gps, we realize at 8:20 a.m. we have reached the point in the canal where the current changes over from the Chesapeake Bay tides to the Delaware Bay tides.  For nearly two hours we had been riding a flood tide from Chesapeake Bay west to east.  The current had gone slack but we were now with the ebb tide for Delaware Bay, the ebb tide also running west to east.  The water is pulling us to Delaware Bay.


At 9 a.m. we look down the canal with binoculars and see the Jersey Shore on the far side of the Delaware River.  We have made it through the canal without seeing any commercial traffic, just a couple of cruising sailboats headed to Chesapeake Bay.  We now see traffic out in the river - tug boats and barges with cranes.  On channel 13 captains talking about locations and destinations, crossing bows and passing on the port side.  It is time to pay attention to traffic. 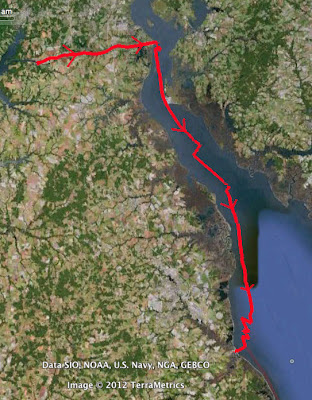 Spartina is a mess with sleeping gear spread out to dry.  We round the south jetty of the canal and anchor in about 10 feet of water.  The gear is stowed and, after almost three hours of motoring, we rig Spartina for sailing.  With much delight I break out the chart of Delaware Bay, something ordered the winter before on a cold day when I was day dreaming about sailing.  There is a nice SW breeze.  We sail off the anchor and soon, with some help from the current,  we are making our way south on the dreaded Delaware Bay at 5 knots. 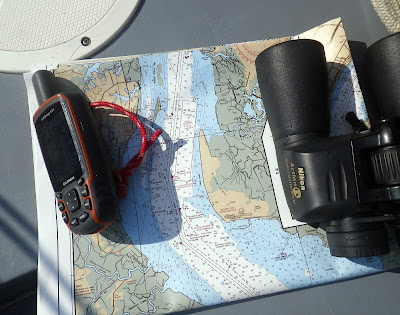 We tack up to the channel and then tack west back to the shallows of Reedy Island Bar.  Heading back southeast on the next tack, with all the commercial traffic in sight well above us and heading away, we cross the channel to make the most of the run.  We reach the shallows off a nuclear power plant and I wonder if we will see any security boats coming out way.  We do not.  But the shallow water and wind with an opposing tide makes it very choppy.  We sail close to shore and then past the sunken ships used to make a harbor for the power plant.  Before reaching Hope Creek Jetty we come about and sail south down the quickly widening bay. 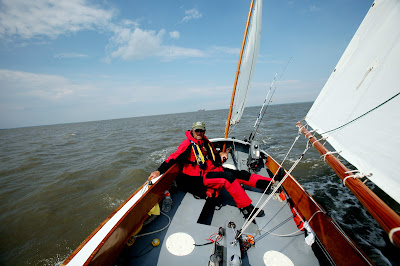 I hear talk on the radio about a ship leaving the canal "headed for open sea".  Soon I see a large white ship round the point and heading down the channel which is to the west of us.  And then another ships follows behind.  Spartina stays on the east side of the channel sailing on bumpy water at 5 knots, knowing that at some point we will have to cross back over the channel.  The first ship passes by.  I considering crossing the channel but decide there was no pressing reason to do so.  We wait for the second ship to go by and make a leisurely cross back to the west side of the channel. 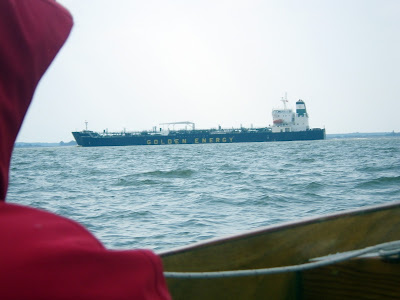 I go up forward to take a nap while Bruce has the tiller.  I wake and check the gps to see that we are doing sustained runs at over 8 knots, much of that being the current.  We'll take it.  The afternoon wind is picking up and Spartina plows though the water feeling strong and solid.  The bow wave jumps out from the port side in sprays of foamy water.  It is fantastic sailing.

We can see a container ship, a barge and two sailboats out in the channel, but we are well to the west.  We pass by a few creeks on the Delaware shore that could be anchorages if needed, but by early afternoon we realize we can make the Murderkill River and Bowers Beach by evening. 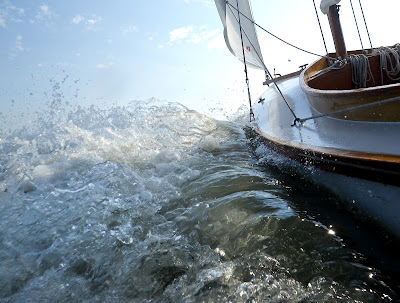 The wind and the chop increase and while Bruce handles the tiller I go forward to tuck a reef into the main.  The current is slack, we notice, but the chop from the morning remains.  The water on the Delaware does feel different than the water on Chesapeake Bay. 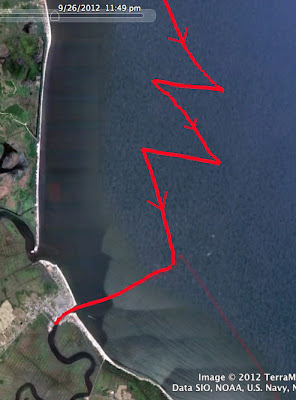 By 3 p.m. the tide has shifted and the current is now working against us.  The wind seems to come in waves, strengthening and then holding, falling off and then coming back again.  Our speed is down to 3.6 knots against the current with choppy and confused water.  The wind falls off and we shake out the reef a couple of miles for the entrance channel to the Murderkill River.  By 5 p.m. we've got a mile to go to the channel marker and we do a series of tacks against the wind and current to reach the marker with the sun heading for the horizon. 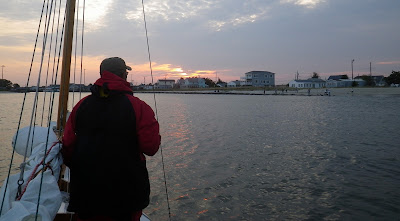 Checking the charts we see very shallow water on either side of a narrow channel.  We round up, drop the sails and start the motor.  With the tide running across the channel it is surprising hard to stay in the channel and I am glad we did not try to sail in.

We pass fisherman working the incoming tide at the mouth of the river and along the sandy beach.  The current is running at almost 3 knots up the narrow river cluttered with docks and buildings on both sides.  I see what looks to be a restaurant and ask a waterman on the dock if it is open.  Yes, he says, tie up at the far end of the dock.  The current carries us quickly past the restaurant and I need to open the throttle to turn around and get back to the dock. 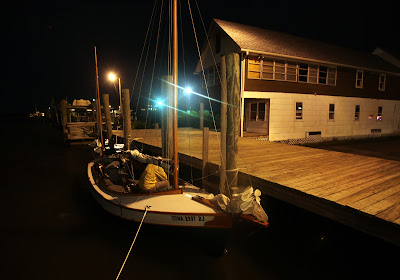 We tie up and I walk over to waterman to ask him about anchoring on the creek.  The waterman is Pete, co-owner of the restaurant JP's on the Wharf.  He is friendly and very helpful.  When I ask about  the creek he says we will probably end up sitting in the mud, there is a six foot tide on the Murderkill River.  Better off, he tells me, to stay where we are and set up some good spring lines to handle the tidal shift.  Bruce and I do our best to tie up with four lines and then Pete comes over to make a few suggestions.  It is clear that he knows what he is talking about.  With Spartina secure we head into JP's on the Wharf for an excellent dinner.  It is late in the evening and off-season for the small resort town, we are the only customers.

Later than evening Pete comes over with his daughter to check on us.  He tells us our lines are good, then asks about the trip.  As we talk Pete's daughter, armed with a fishing pole, catches one fish after another in the current under the lights of the restaurant.  Bluefish and stripers, all about 6 or 8 inches long.  Laughing and giggling she brings the fish over for her father to unhook, enjoying life in a way that every child should.

Pete says good night and heads off.  We set up the boom tent for a little privacy, then go to sleep listening to the current rushing beneath Spartina.

8 knots! Holy cow. Those first pictures at dawn look like something out of a dream. Must have been a memorable day. Thanks for sharing it with us.

Yes, memorable day to say the least. Most miles covered, fastest sustained speed. It was a great day.

Eight knots even with the current, is flyin'. That's great to hear. I thought doing 6 knots on my P-18 was flying.

Sounds like the weather forecast is like it is down here in the coastal waters of NC. It changes....on the half-hour.

I envy you two, too.