"There was a fair wind and I flew past Betterton, the Sassafras and Turkey Point.....I went under the first high bridge and turned into a marine basin at Chesapeake City.  It was 12:30 and I had gone 31 miles."  -Washington Tuttle


Dawn comes as clear as yesterday but a little warmer.  Up at 6:30 after a calm quiet night,  no wind and the boat swinging with the current under a sky filled with stars and a bright moon.

Sleeping gear stowed, we eat breakfast bars and cups of fruit while motoring out of the creek.  All sails go up just outside the channel markers.  A nice following wind and we make over three knots against a one knot ebb tide.  I try to sail wing and wing but the waves and wind push the stern from side to side, it is too much work to keep the gaff rigged main from jibing so we fall off to a broad reach. 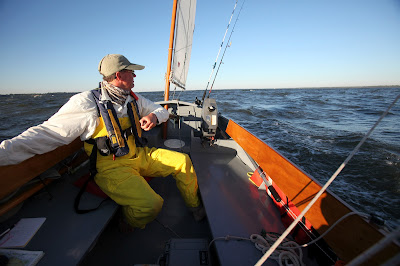 The wind picks up to a stiff breeze and at shallows off of Howell Point near the mouth of the Sassafras River rolling waves break at Spartina's stern, the water caught between opposing wind and tide.  We see a southbound barge out in the channel, commercial traffic from the Chesapeake and Delaware Canal.  A pair of eagles fly near the trees on the shore as Spartina makes three knots.  Up ahead are two bright lights, bright even in the full sun - range lights guiding us to the canal.  Spartina quickly sails across the mouth of the Sassafras River. 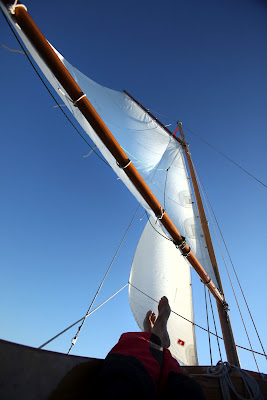 South of Turkey Point the water is very rough and wind seems to pick up.  The choppy waves sometime grab the stern and pull it to starboard.  I compensate with the rudder until a wave and a gust combine to pull the stern around and Spartina heels over, rounds up into the wind.  Too much sail for these conditions so we tuck in a reef.  Minutes later, approaching the Elk River with the wind and waves behind us, the stern swings to starboard once again.  We round up a second time and I tie in a second reef, dropping the mizzen altogether. 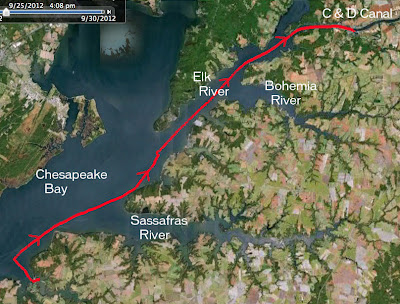 The water is calmer in the Elk River.  The tides seem to have changed and now the current is with us.  We make excellent time across the mouth of the Bohemia River.  Another barge comes down the Elk River from the canal and we begin to wonder how much traffic we will find in the water way.  On the radio I hear a captain tell a pleasure boater "You can go to the green markers or you can go to the red markers, just make sure you stay up against those markers."  We take this as good advice for a Spartina.

In lighter winds we shake out the second reef, then a few minutes later shake out the first reef and raise the mizzen.  Looking up ahead we see the canal entrance just a mile away.

Spartina enters the canal wing and wing making 5 knots, the current helping us along the way.  As the canal narrows we drop the sails and start the outboard, making a surprising 5.5 knots at idle speed.  The running current is, for at least this moment, our friend.  There are no other vessels, commercial or otherwise, in the canal. 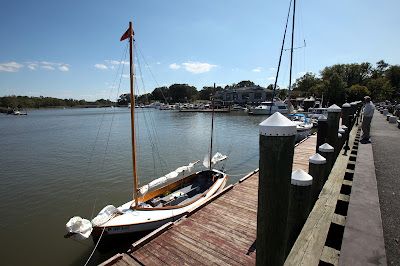 Earlier than expected we slip under the first bridge of canal and turn into the basin at Chesapeake City.    We tie up at the public dock, head to the outside deck at the Chesapeake Inn for a cool drink and a bite to eat. 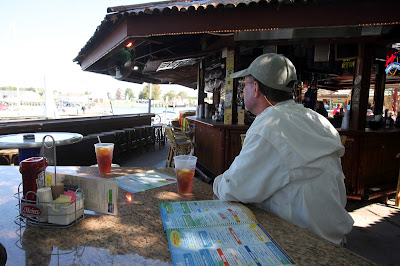 We relax, explore the pretty little town and move Spartina to a smaller slip which makes room for a large trawler coming into the public dock.   We check out a couple of restaurants and find none as appealing as the open deck at the Chesapeake Inn.  We return there for a light supper. 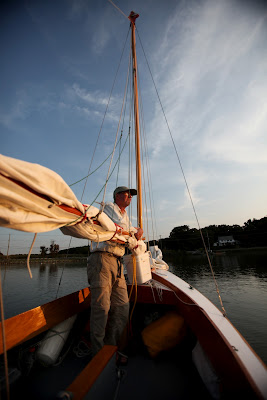 After dinner we cast off from the dock and motor across the basin away from the noise of the waterfront bar - live band is getting cranked up, as is a party for real estate agents.

A handful of cruisers are already anchored out in the basin, and more boats are coming in.  We head to the far side near a boat ramp and a house boat that was built out of a pontoon boat, the captain seemingly living "off the grid" in his floating home.  He has a topless mermaid painted on the front door of his floating home.

A few more sailboats come into the anchorage as the sun drops beyond Chesapeake City.  We set up the bivy's and call it a day. 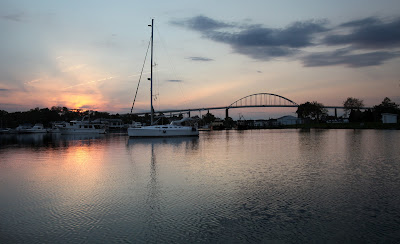 you must have crossed or nearly crossed paths with the 36' Voyageur canoe paddling from Ottawa to D.C. They passed through the canal on Tuesday over-nighting at Chesapeake City. https://sites.google.com/site/capital2capitol/home

That looks like a great trip. We missed them by a couple of weeks. Our trip started late sept., I'm just now getting around to posting the log.
I do wish we had seen the canoe.

Man, what a great trip already! I really need to get my boat done and get out there...