The next day I sailed to Lewes, Delaware and motored into Roosevelt Inlet not knowing what to expect.  Lewes was the beginning of a canal which let to Rehoboth Bay.  I motored up to a small drawbridge and anchored.  The wind was strong and I woke up in time to find my boat drifting.  -Washington Tuttle 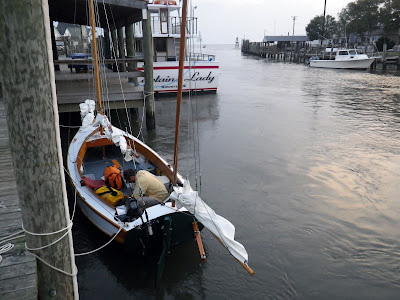 Before dawn Bruce mentions that Spartina has an unusual feel.  All night she had floated on the running tides, now we are perfectly still.  I check the lines.  It is low tide and one spring line is pulled tight.  I put a little slack in it and Spartina returns to gently rolling on the water.

We are up at 6 a.m., Bruce tucking things away on Spartina while I make a run to a trash can down the block from JP's on the Wharf near a parking lot at a public boat ramp.  A bait stand is open in the parking lot, a small shed filled with lures, fishing poles and advertisements for day fishing trips.  There are no customers inside and the man at the counter watches a women's talk show on the television.

We cast off from the dock a little after 7 with an incoming tide, motor out past the jetties and follow the channel out onto Delaware Bay.  We find a flood tide and an opposing north wind, the wind is light and we struggle in the chop.  The wind drops off.  I look at the gps to see we are even with Rock Hall, just on the other side of the peninsula, as the we start the outboard and motor south. 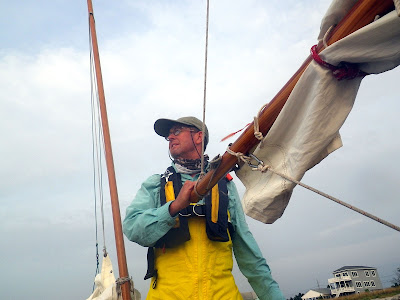 By 9 a.m. there is no wind at all.  We motor just off the beach past group of houses with watch towers.  Marked as Big Stone Beach on the charts, it looks like military housing.  With the lack of wind and the incoming tide it could be a long day. 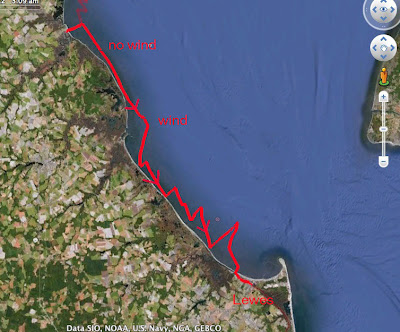 There are a few freighters out in the channel miles to the east, more traffic than yesterday.  Schools of dolphin approach Spartina and then move ahead of us, soon to be followed by another group.  We stay close to the beach hoping to avoid the chop out on the bay. 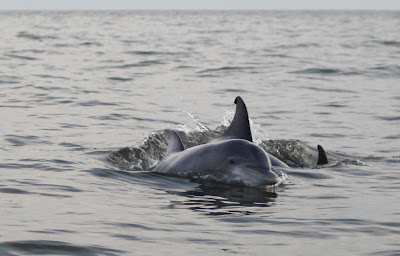 Late morning a southeast breeze arrives.  We shut down the outboard and tack just off the shore, a sandy beach with creeks and marshes every few miles.  There is the Mispillion River with a long jetty jutting out into the bay, and just south of that Slaughter Beach, a group of weekend homes. We make over three knots but after being spoiled yesterday by doing eight knots it feels like we are hardly moving.

The centerboard touches the sandy bottom and we tack back out into deeper water, then back towards the beach.  We take turns at the tiller, Bruce on the tiller and me sleeping up forward, then Bruce sleeps while I sail.

We make longer tacks out into the bay but with the light wind and heavy chop we are not making much progress.  Structures of Lewes are visible on the horizon to the SE and we can see the car ferries coming over from Cape May into the Lewes ferry docks.

The tide and wind are not kind to us and we decide to start the outboard with the channel entrance to Lewes about a mile and half away.  We motor sail to the first marker and bring in the sails as we pass down the jetties. 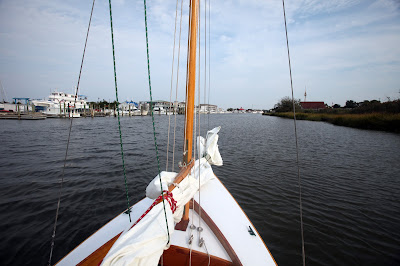 Inside Roosevelt Inlet the channel turn to port and we follow it through an upscale neighborhood, large yachts and boat houses, maybe old fish houses rebuilt as weekend getaways.  We look along shore for a place to tie up for the night, noting three floating docks that look abandoned with a "for sale" sign on them.  Farther down are restaurants and marinas on either side and a lift bridge up ahead. 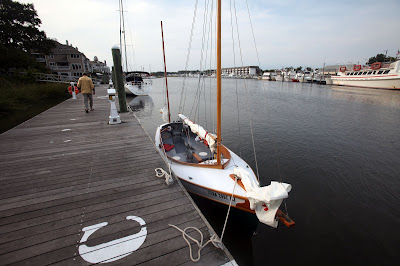 We can't pass under the lift bridge, it is too low.  And a sign says they need at least four hours notice to raise the bridge.  Just before the bridge is a public dock - public but not free.  We tie up and read the rules, or at least most of the rules anyway.  The rates seem complicated but as far as we can understand we need to pay for two hours stay at one rate, then overnight at another rate.  I fill out the form, we each kick in for total of $50 and slip it into the drop box.

I call the phone number to schedule a lift for 10 the next day.  "What bridge?" I'm asked.  The bridge in Lewes I tell the guy on the phone.  He says he is not sure what bridge that might be.  I tell him I'll call back, walk up to the road to get the name of the bridge, call back and get another operator who knows that there is only one bridge in Lewes.  We are set for 10 a.m. tomorrow.

We walk through town, head to Gilligan's for an excellent dinner.  Back to the boat to fill out our logs, then back to Gilligan's for a beer and a football game on tv.  A fight nearly breaks out a couple of tables away on the outdoors patio overlooking the canal, two guys nose to nose over a woman who sits there saying nothing.  The guys say "excuse me" to Bruce as he walks by on his way to the rest room, then they go back nose to nose. The bigger guy flips the visor off the smaller guy, says "hit the bricks or you're gonna end up in a hospital and I'll be in jail." The bartender breaks it up.

We head back to the boat for a good night's sleep, cars and truck rumbling over the lift bridge about 50 yards away. 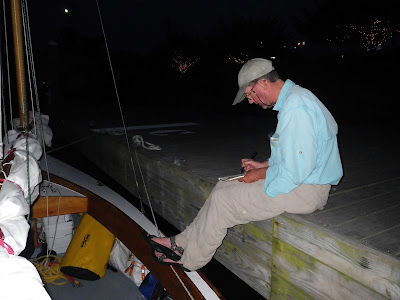