Awake at 6:45 after a calm night with early morning blasts of wind coming over the tree tops.  Weather forecast calls for gusts around 25 and waves two to three feet on the bay.  Light cloud cover and we sail off anchor at 7:30 with mizzen and jib, the main tightly furled to the boom with a double reef tucked in.

Heading north there are two passages out of the Honga River onto Chesapeake Bay.  The southern passage is through a channel at the north end of Middle Hooper Island.  Once out on the bay it is over 20 miles north to protected water.  The northern passage is under the smaller bridge at Fishing Creek.  That leads out through a very narrow winding channel to the north end of Barren Island.  It is over 17 miles from there to sheltered water on the Little Choptank.  Should I leave the protection of the Honga River I will, with tides and the narrow channels, have a difficult time coming back in.  Before leaving the river I want to be sure I can cover all those miles to the north. 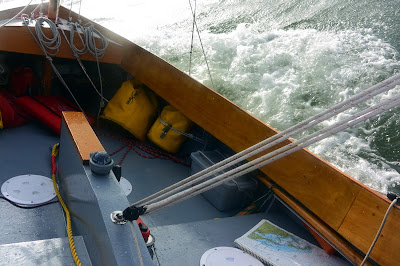 We pass Pauls Cove and round Windmill Point where a waterman scraping for crabs waves from his deadrise Ticky Poo.  I round up and raise the double reefed main in the protection of Asquith Island and once out from the island feel the first gusts of wind coming out of the northeast.  Spartina heels quickly to port.  I round up, tack and suddenly I'm looking down at water surging along the coaming as we heel to starboard.  I realize we won't be leaving the river today. 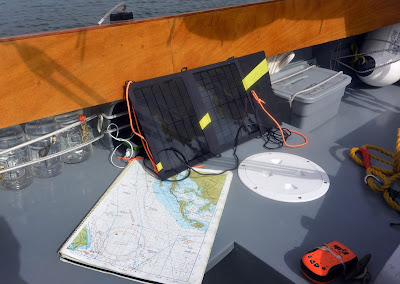 We tack across the Honga River to Parks Neck, reaching the calm in the shadow of the tall pines and dropping anchor, it's not yet 10:00 a.m.  The sun comes out and I have a late breakfast, nap, listen to the radio and charge my batteries with the solar panel. 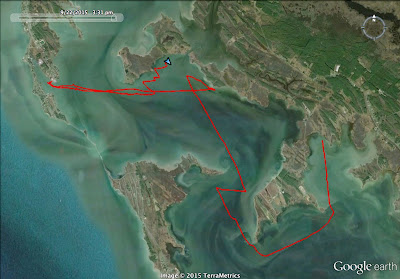 Early afternoon I listen to the forecast and it is the same for the next four days:  small craft warnings, waves two to three feet, gusty winds out of the northeast.  The low remains stationary off the Carolinas and a cool front is edging down from New England.

I raise anchor and sail across the river to the village of Fishing Creek, tying up at the docks of Hoopers Island Oyster Aquaculture Company.  Spartina blocks the channel leading to their marina but it is the afternoon and all the workboats are tied to the dock, I don't think anybody will be heading out of the channel soon.  I walk around until I find two men sorting oysters.  They point me to a building where I find a young woman working in a lab.  I tell her I would like to buy some oysters and she leads me to an office where I meet Ben.  I ask him if I could buy a half dozen oysters.  "Come on," he says.

Ben leads me around the corner to a large refrigerated room.  There is just one box of oysters remaining in the room, the rest being shipped out earlier in the day.  He starts sorting through the oysters, picking out the larger ones and counting three, four, five and six.  That's plenty I say and he keeps counting, eight, nine, ten, eleven and twelve.  He hands me the bag and says "let's call that a half dozen" and gives me bag of ice to keep them cold.  I reach for my wallet and he says don't bother, just spread the word about good oysters and oyster farming.

Outside we can just see Spartina's masts poking  up out of the marina.  With the weather Ben suggests I stay in the marina, he can help me find room to tie up for the night or two.  I say thanks, but I'll be heading back across the river for the night.  "How about a ride to the store?" he asks, "or I can give you a ride to the restaurant if you like."  I tell him thanks, but the oysters are all I need.  Ben tells me he was watching the weather channel when I found him in the office.  That low of the Carolinas might take on some tropical characteristics, he says, could be 50 mile an hour winds and five to eight inches of rain later in the week.  Be careful, he says, and wishes me well.  I thank him for the oysters, tell him I will spread the good word. 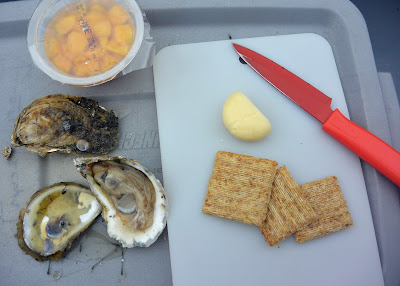 I motor out of the creek, raise mizzen and jib on the gusty afternoon and sail back across the river to Parks Neck where we anchor up near shore.  Oysters, crackers, cheese and fruit on a grey afternoon.  I wonder about the coming weather and listening to the forecast doesn't help my mood.  Small craft warnings the next four days and I wonder how or if I'll make it up to the Little Choptank.  I think about sailing south, with all that wind out of the northeast I could easily be back in Cape Charles in two days.  I write 14 nm in my notebook and go to sleep.